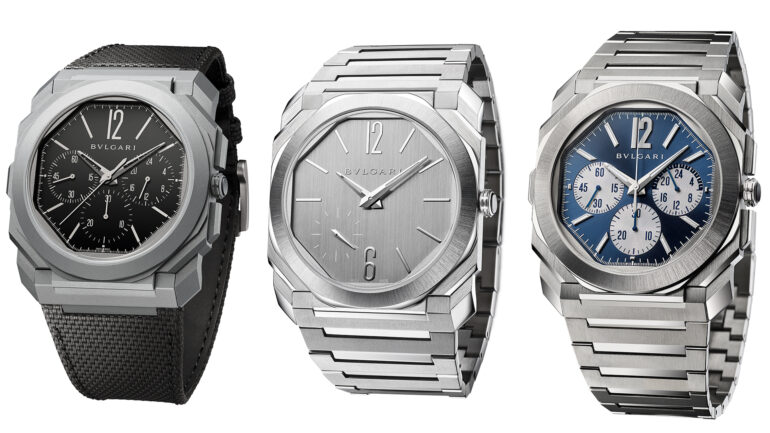 The Octo Finissimo is Bulgari’s signature smart/casual sports watch collection that also features an integrated bracelet. You may be surprised to know that Bulgari does make watches other than the Octo Finissimo, but we think these are by far and away the most interesting. Bulgari has just added three new models to the range as well. While they’re not record-breakingly slim like all of the other recent Octo Finissimo models, they are reminders that Bulgari hasn’t forgotten about the mere mortals who save up their cash to buy a more affordable model. Let’s take a look. 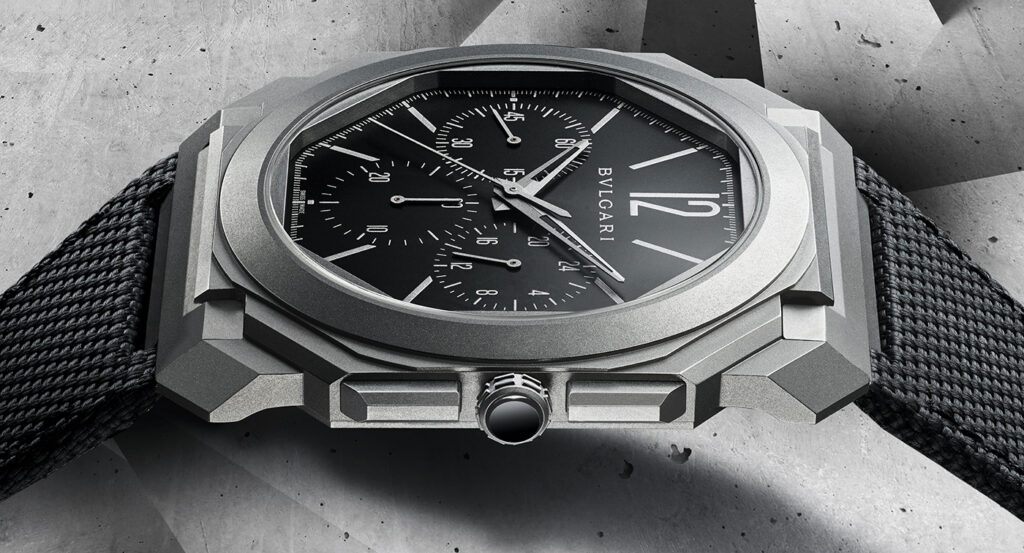 The first watch is the priciest of the bunch and my favourite of the two chronograph GMT models. It uses a titanium case with a diameter of 42mm and a thickness of 6.9mm with a brushed finish. The dial is a simple matte black with thin markers and hands. At 3 O’clock is a 24-hour GMT subdial, a 30-minute counter for the chronograph sits at 6 o’clock and the running seconds are at 9 O’clock. Luckily, Bulgari has not attempted to add a date window to the watch; it would only upset the dial’s balance and add thickness anyway. Inside the watch is the automatically-wound calibre BVL 318, which has its rotor around the edge of the movement (called a periphery rotor) for extra slimness. It still has a column wheel for the chronograph and a full bridge for the balance wheel’s extra stability. It comes on an integrated rubber strap with a textile pattern on it and will cost $17,200. 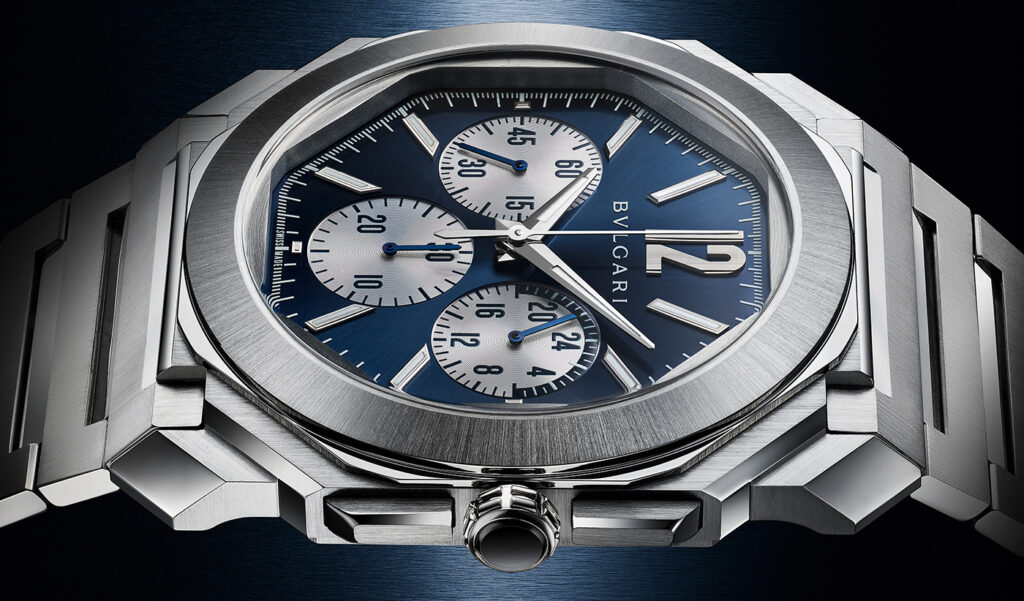 The next model is similar to the previous in that it has both a chronograph and a GMT function, as well as the signature Octo Finissimo case. That’s about where the similarities end, as this model is more substantial thanks to its larger dimensions of 43mm x 8.75mm. Bulgari doesn’t give a reason for this size increase. The dial is blue with sunburst polishing and white subdials in the same layout as previously. However, the GMT subdial has an extra blue section to distinguish between night and day more easily. Like on the previous watch, the calibre BVL 318 is inside this watch, it has a 55-hour power reserve and a 3Hz beat rate, not bad for a movement only 3.3mm thick. Like the previous watch we looked at, a smartly integrated pusher at 9 O’clock on the case advances the 24-hour hand forwards independently of the rest of the display. This model has a stainless steel case instead of titanium and the signature wide integrated bracelet. It will cost you $16,500 new. 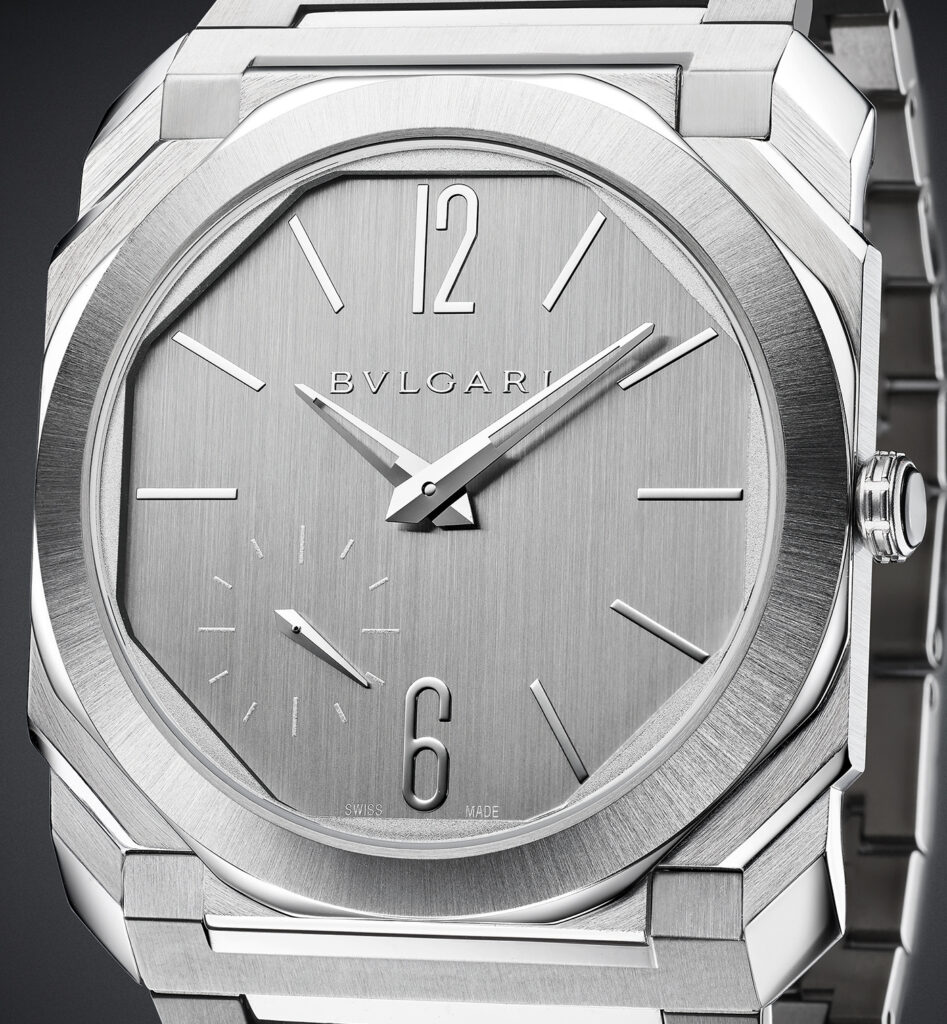 The final model is probably my favourite three-hand smart/casual sports watch at the moment. An extremely minimalistic dial hosts two numerals at opposite ends and applied stick markers in between. The dauphine hands have been skeletonised, and an offset sub-seconds display has been added for another level of sophistication. It features a case made from stainless steel measuring 40mm in diameter and 6.4mm in thickness. Like the previous watch, this one has a screw-down crown which means it can have a high water-resistance rating of 100m (the first watch we looked at didn’t have a screw-down crown. Inside this watch is the calibre BVL 138 which has a platinum micro-rotor, a 60-hour power reserve and a beat rate of 3Hz. The real stand-out of this watch, however, is the vertically brushed silver dial, which might prove problematic if you want to, you know, tell the time on it, but it looks fantastic. The price isn’t too bad, either. It retails for $12,000.

I’m glad Bulgari hasn’t forgotten about the folks who love their watches but can’t afford the super-mega-ultra-thin watches with world records and a million digits in their price tag. These watches prove the versatility of the Octo Finissimo’s design.