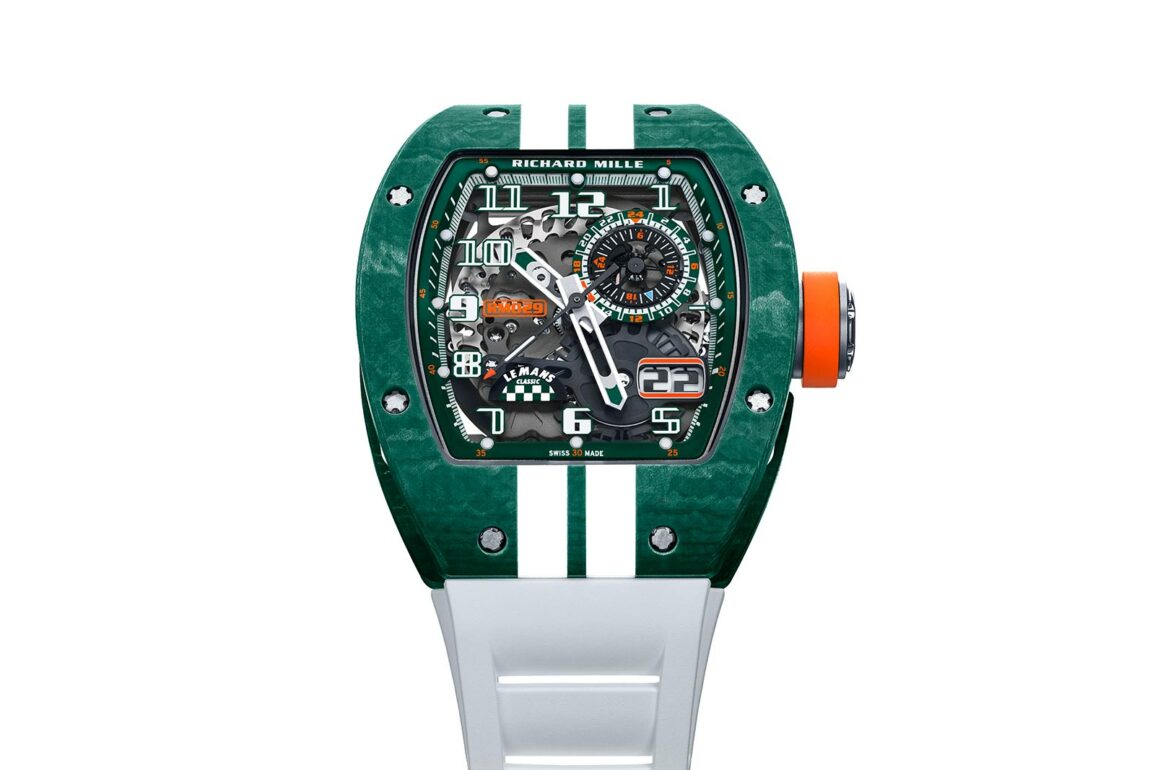 Richard Mille is a brand that has always had a strong association with the world of racing and supercars. A short while back, the high-end luxury watch brand released the RM 40-01, a rugged sports watch inspired by the McLaren Speedtail. The latest racing-inspired serving from Richard Mille comes in the form of the RM029 Le Mans Classic, a watch that pays a tribute to the legendary Le Mans Classic race, which, due to the ongoing Covid-19 Pandemic will not be held this year. 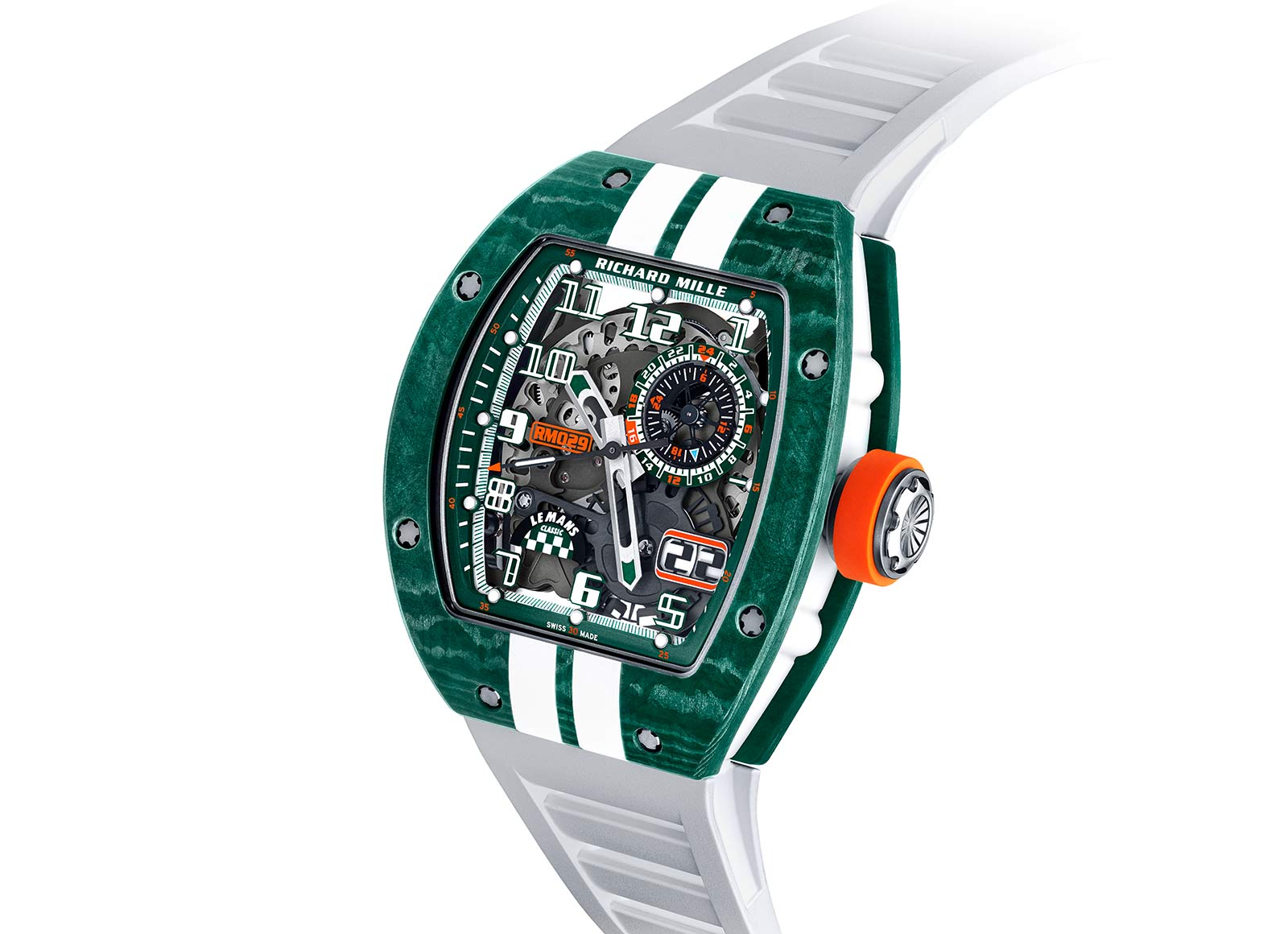 Le Mans Classic is a vintage car sports event held every two years on the 13.65 Km Circuit de la Sarthe located in Le Mans France. Only cars from before 1979 can participate in the event, and the team that covers the maximum distance within 24-hour wind the race. Richard Mille has been a partner of the popular racing event since its inception in 2002 and has developed 8 special watches dedicated to the event, including the new RM029. 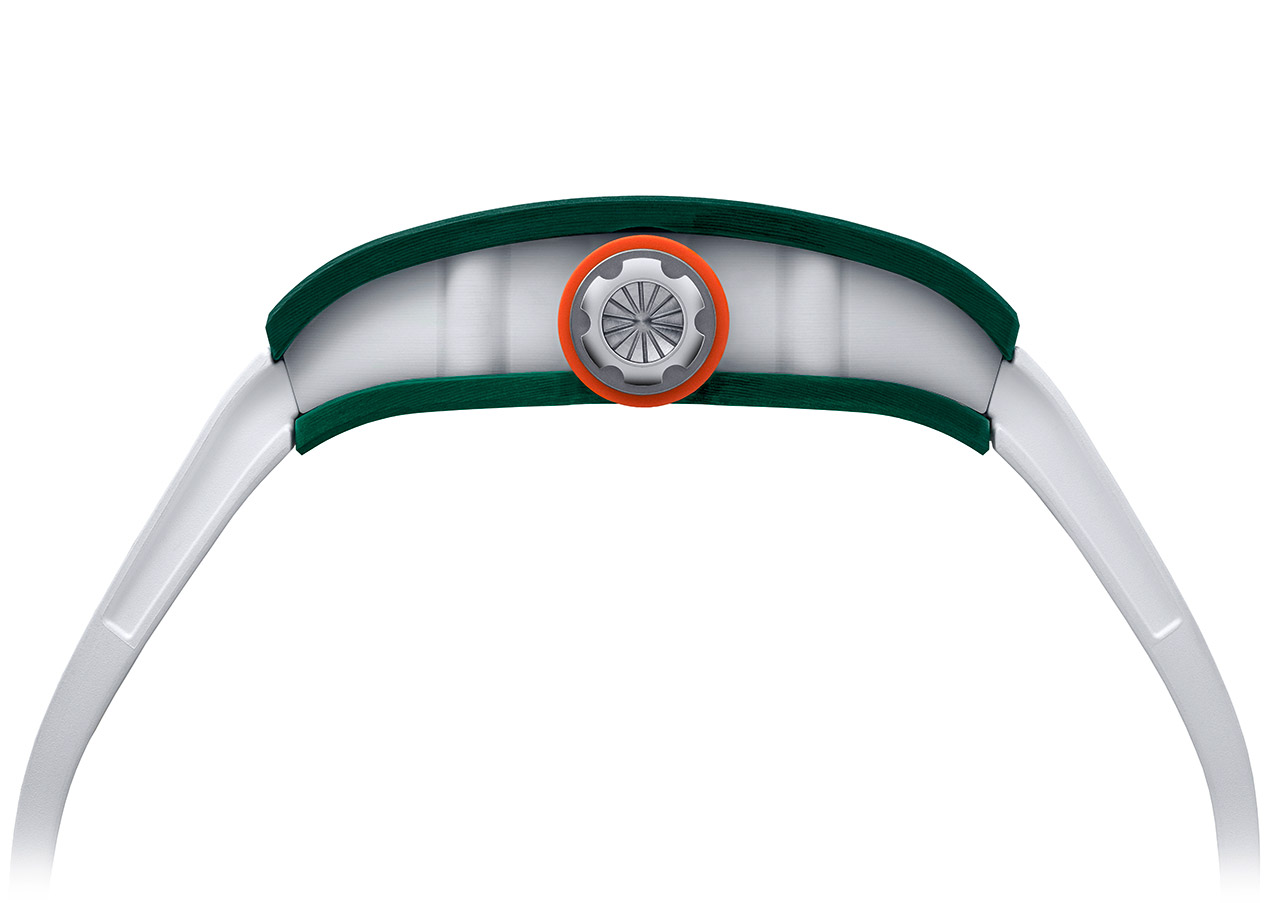 The RM029 is heavily influenced by the Le Mans Classic race and this is exhibited in its interesting design and color choices. To reciprocate the colors of the Le Mans Classic race logo, the tripartite case has been constructed from green and white quartz TPT®. The middle section is made from white quartz, whereas the bezels on the top and bottom make use of green quartz. To further heighten the visual excitement, the bezel on top features the signature double Le Mans stripes. But what makes these stripes truly special is the way they have been executed. These stripes are not painted and are instead four separate pieces of white quartz that have been inlaid into the green quartz bezel – a first for the brand. Apart from this, the case design is typical Richard Mille with a distinctive lug-less design, visible screws on top of the bezel, and a grippy oversized crown that has been highlighted with a sporty orange ring. 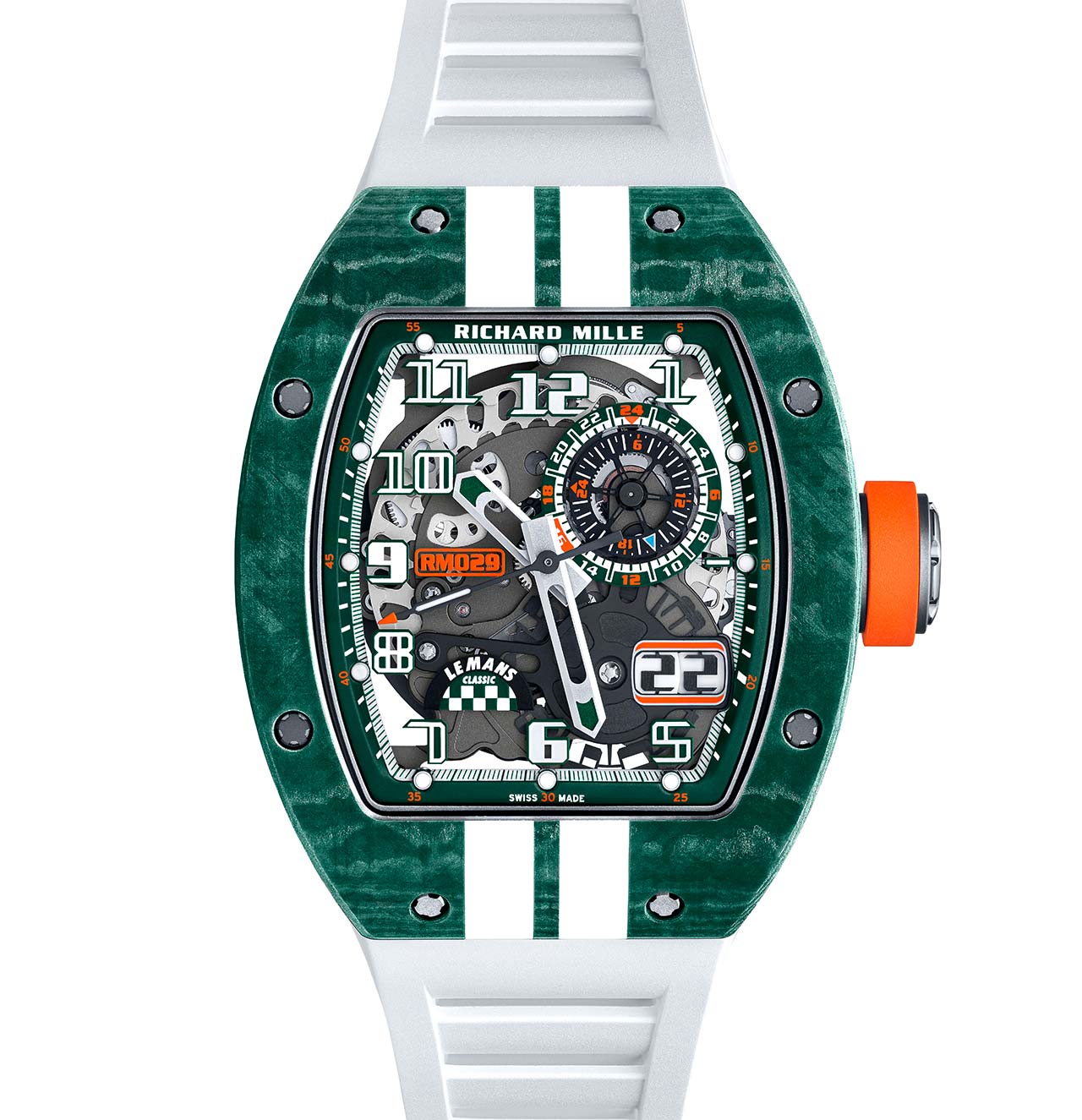 The dial, like the case, continues to showcase the Le Mans inspiration. Everything from the bold printed Arabic numerals, to the 24-hour chapter ring at 2, to the semi-skeletonized hands and the minute chapter ring on the outer periphery, makes use of that exciting white and British green color combination. Additionally, the dial has also been given bright orange accents for a nice pop of color which can be seen on the big-date display at 4, the 24-hour scale, and the arrow-tipped second’s hand, to name a few. The transparent dial gives a clear view of the open-worked calibre RMAS7 that drives this watch. The movement operates at a frequency and offers a power reserve of around 55 hours using two barrels. The base plate and bridges of the movement are made of grade 5 titanium and there is also a variable geometry rotor that can be seen in action through the sapphire case back. 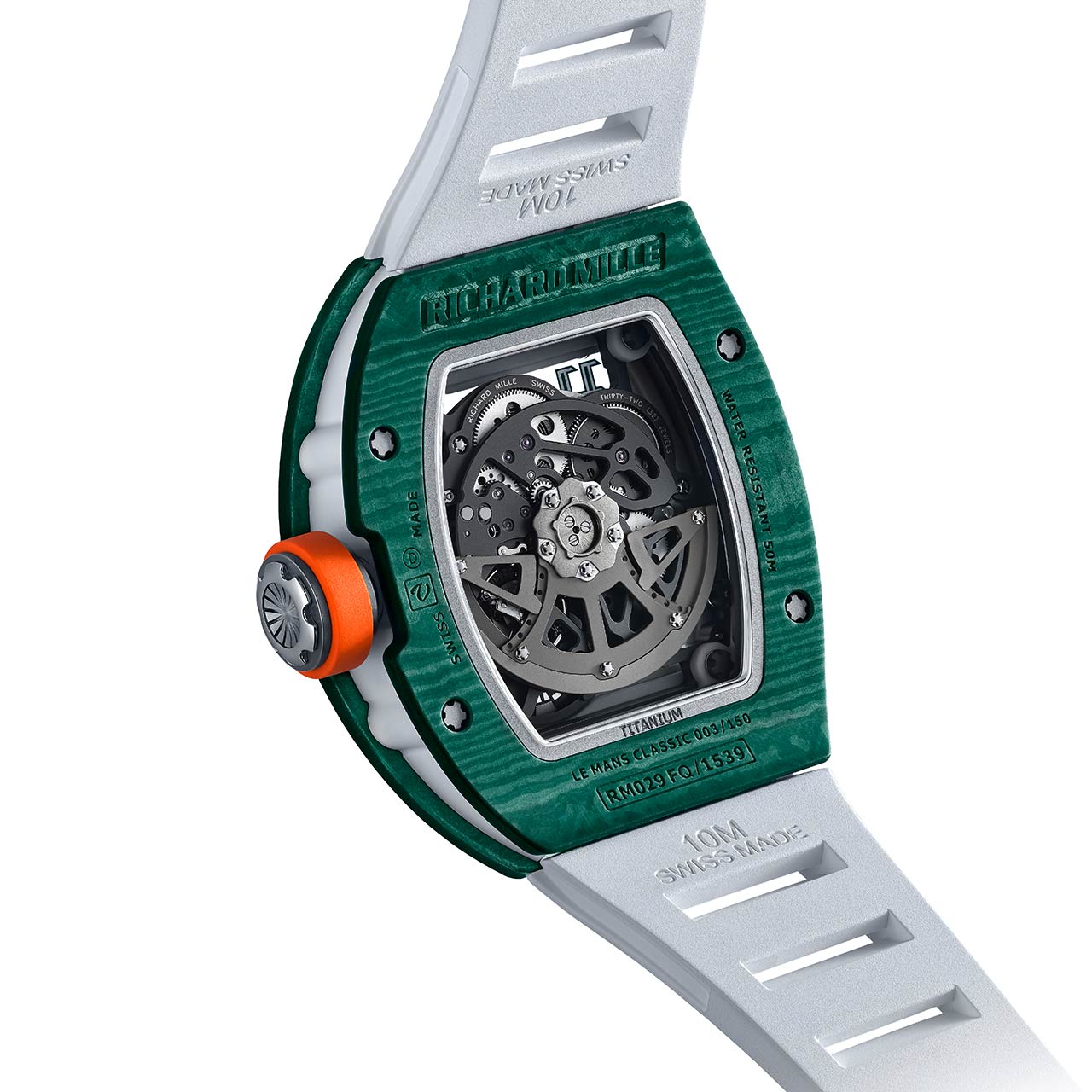 The new Richard Mille RM029 Le Mans Classic comes attached to a strap machined from a solid block of white quartz TPT. The watch will retail for CHF 155,000.