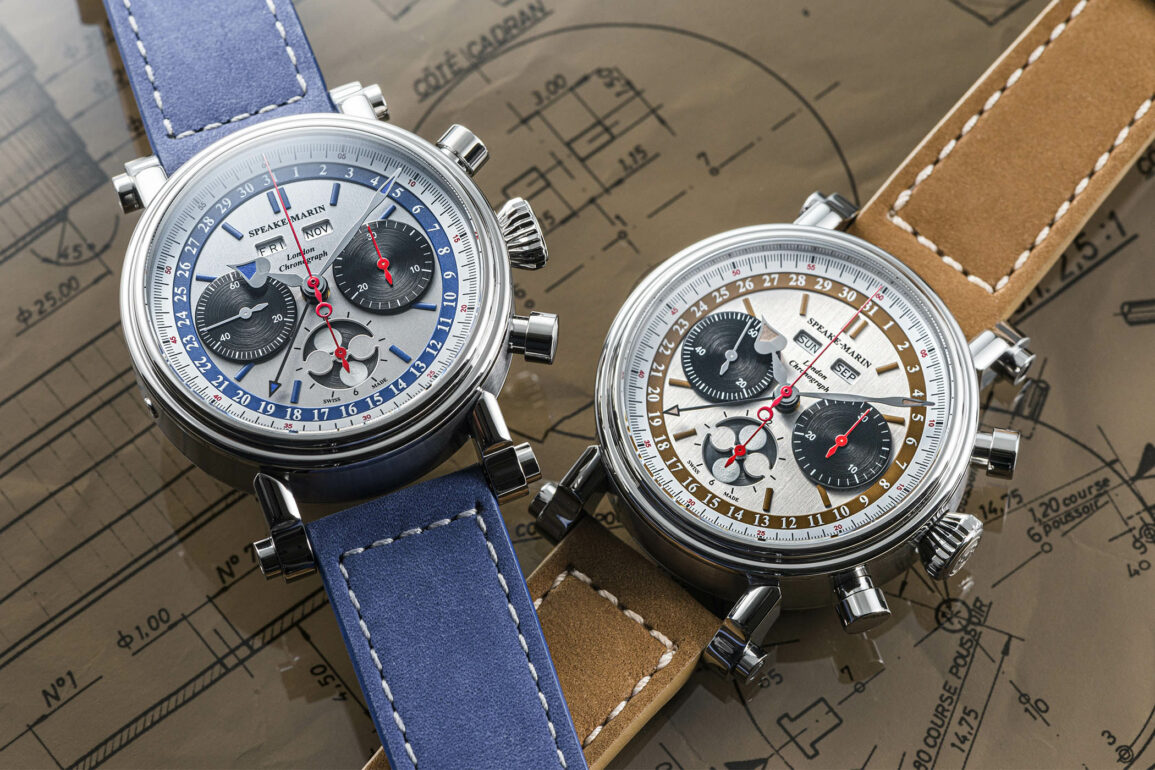 This is the newest watch from Speake-Marin, the London Chronograph Triple Date, and it’s not what you’d call subtle. Some people will describe it as a symphony of elements working together to create a form of pseudo harmony, while others would say it’s a bit of a mess. Luckily, the people who call it a mess tend to buy something boring leaving us fans to enjoy the creations of Speake-Marin. 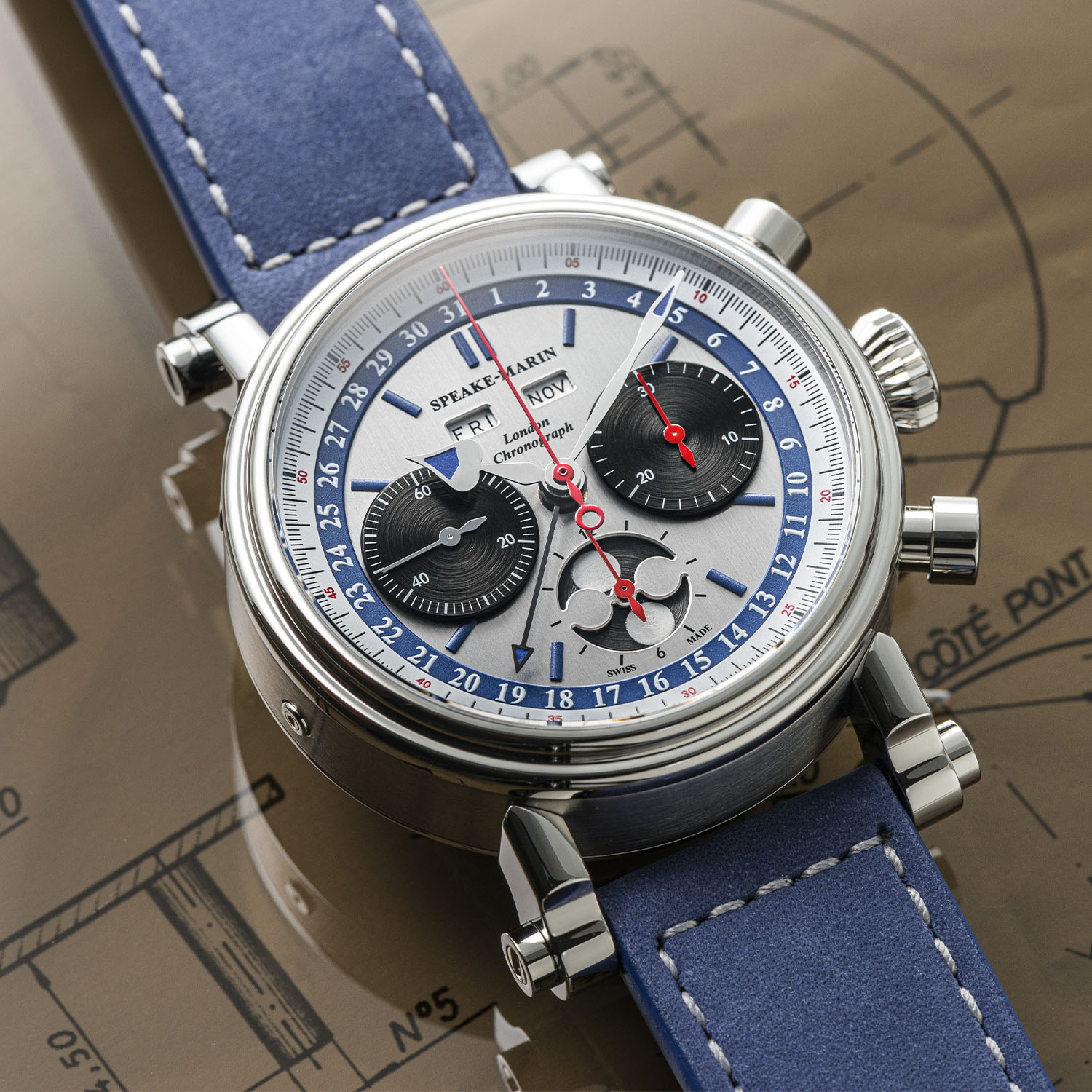 The dial of the watch is, admittedly, a mess, at least in my opinion. The organised chaos doesn’t seem to fit well. There’s blue on the date ring, markers and the hands too. Touches of red have been applied to the functions used by the chronograph, namely the central seconds, the minutes subdial at 3 o’clock and the hours subdial at 6 o’clock. Silver hands display the time, and there are two windows for the calendar function. Oh, and there’s a moonphase too, for good measure. 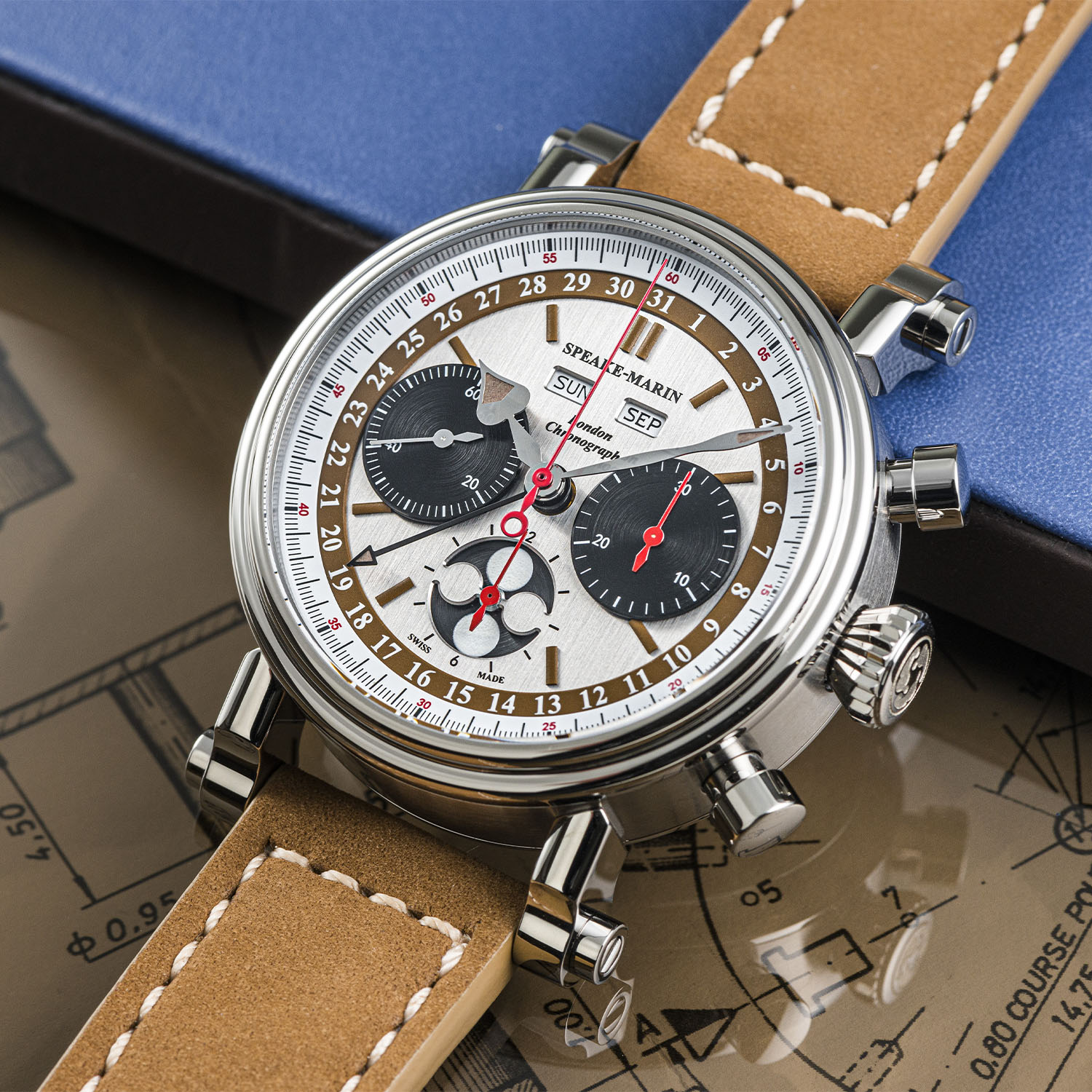 No, wait, it’s not there for good measure, it’s there because this watch uses a movement which had a moonphase fitted already. Usually, when I say a watch with a price tag like this (CHF20,950) has a Valjoux movement in we all slump in our seats and prepare to defend it based on its looks. This one, though, is different. The Valjoux in this watch isn’t off-the-shelf, it’s more from-another-watch.

That’s because the Valjoux calibre 88 found in this Speake-Marin watch actually started life in the 1950s. It was used by brands such as Longines, Universal Genève and Ulysse Nardin back in the day, and its production officially ended in 1974. Over 10,000 were made when it was in production, but it’s now a rare movement today, especially in great condition. 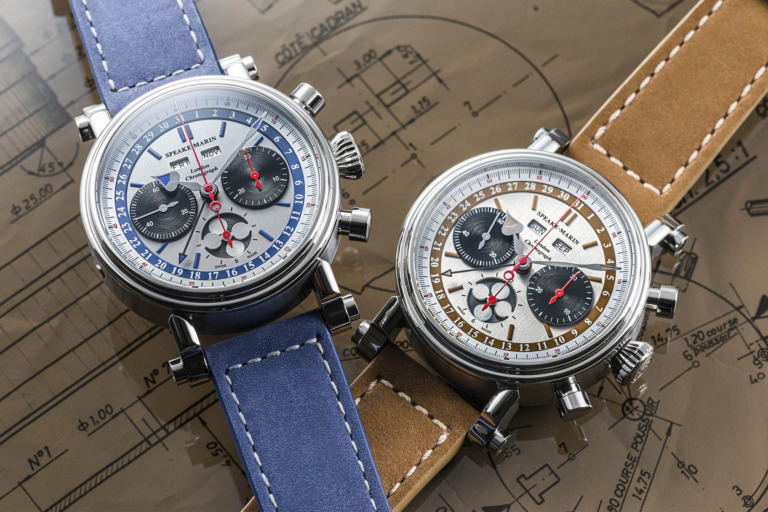 For the London Chronograph Triple Date, Speake-Marin has disassembled the movement and refurbished it with replacement parts as they became available. That means the Valjoux calibre in the watch has been sitting around waiting for the right parts to come on sale. It’s a testament to the patience of a master watchmaker, I know I wouldn’t just put any old stuff in there I could find. 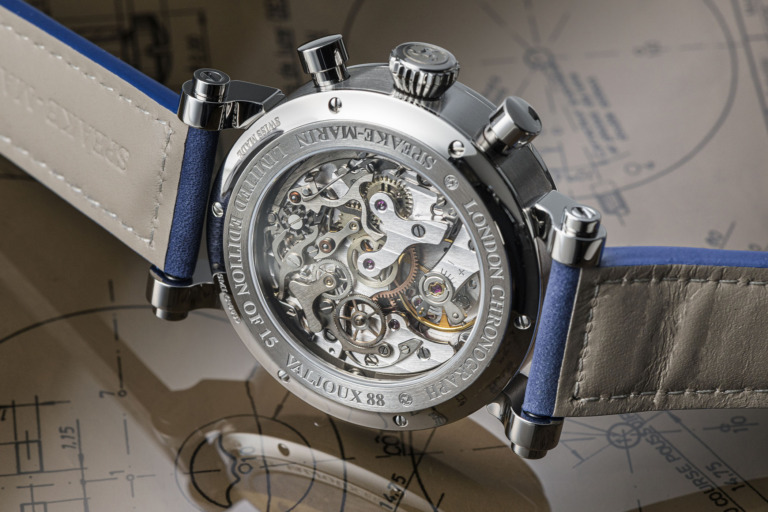 Despite being a product of the mid 20th century, the Valjoux 88 is a complex movement that’s more than capable of standing up to any modern movement. It may only have a 48-hour power reserve and a slow beat rate of 2.5Hz, but it does have a column-wheel chronograph and a full calendar with moonphase and a quickset function, making adjusting the displays easy. There’s also some brand new côtes de Genève decoration applied thanks to Speake-Marin. 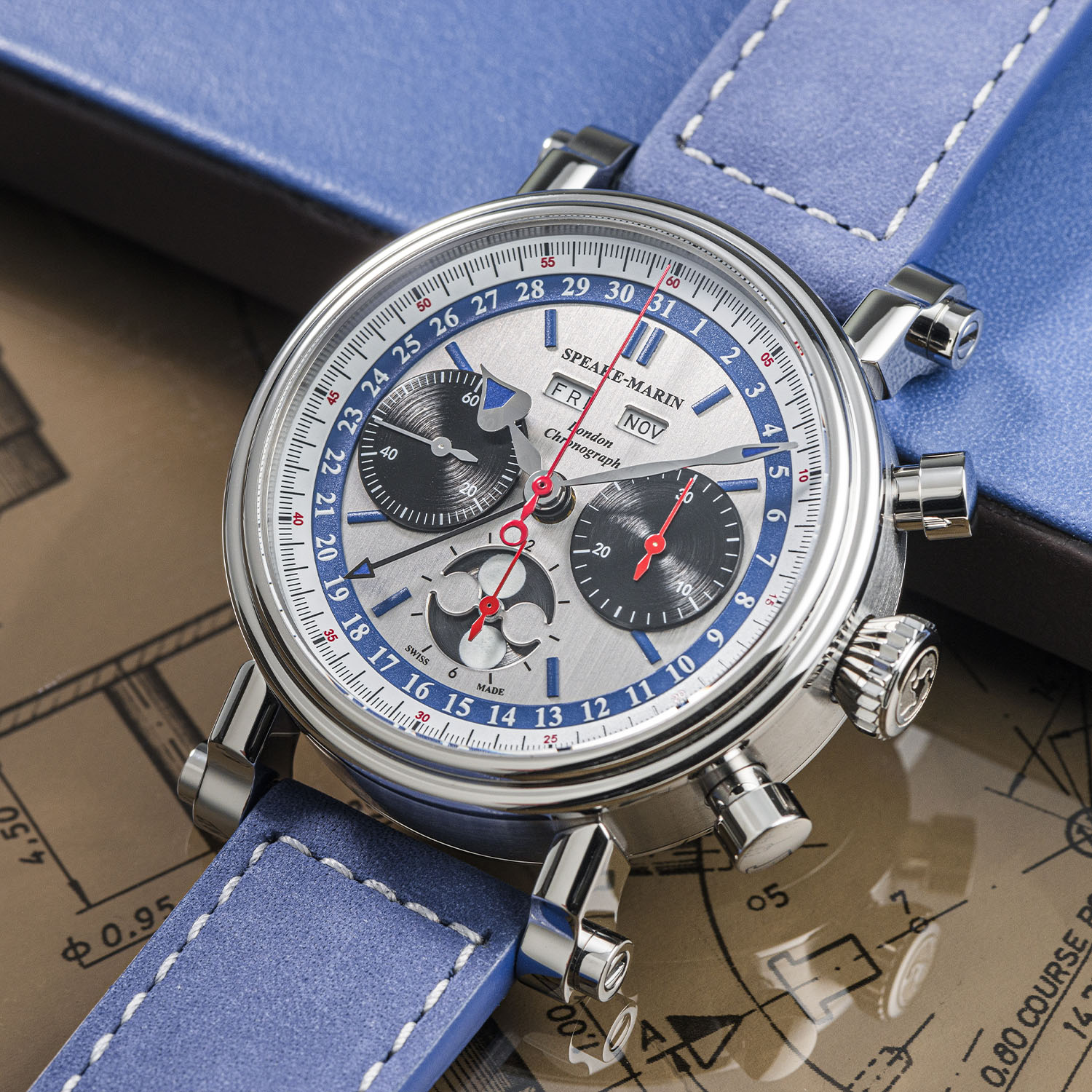 All that vintage loveliness is sat inside a 42mm ‘Piccadilly’ case which features a round centre with the iconic lugs seemingly added on as an extra. I like the fact that the case doesn’t flow into the lugs in this instance, it matches the small touches on the dial, such as the raised subdials. The case is also made of grade 5 titanium and has been both brushed and polished in different places to break up the form. 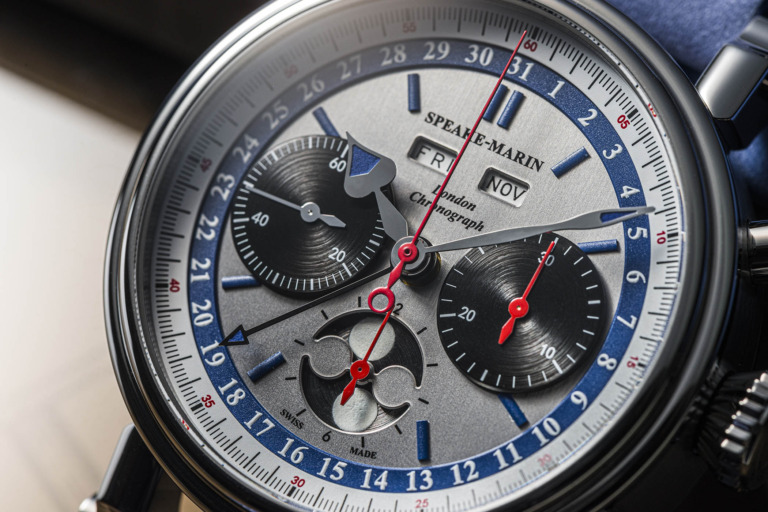 When viewing the dial, it’s easy to point out the flaws in the design. However, when you bring in the other elements of the London Chronograph Triple Date, such as the overly-complicated design of the lugs and the onion crown, you have a watch which works. I started by describing it as a mess, but I think now that I have a new take on the design. I quite like it.

The total production run is limited to just 15 units.