The watch company Arbutus New York has a very interesting history. It started as a Western brand. After having spent almost thirty years studying and working as an apprentice in a watch factory in Shanghai, Albert Reed, along with his brother, founded the watch company, Arbutus, in the early 1980’s. Mr Reed decided to name the company after his hometown in Canada. In New York, Reed and his brother imported all the watches mechanics, assembled and sold the timepieces in the U.S. In 1992, Mr Reed decided to retire.

I was first introduced to the brand back in December 2011. I was intrigued by the number of complications as well as the low price point for the watch. I immediately made an order. 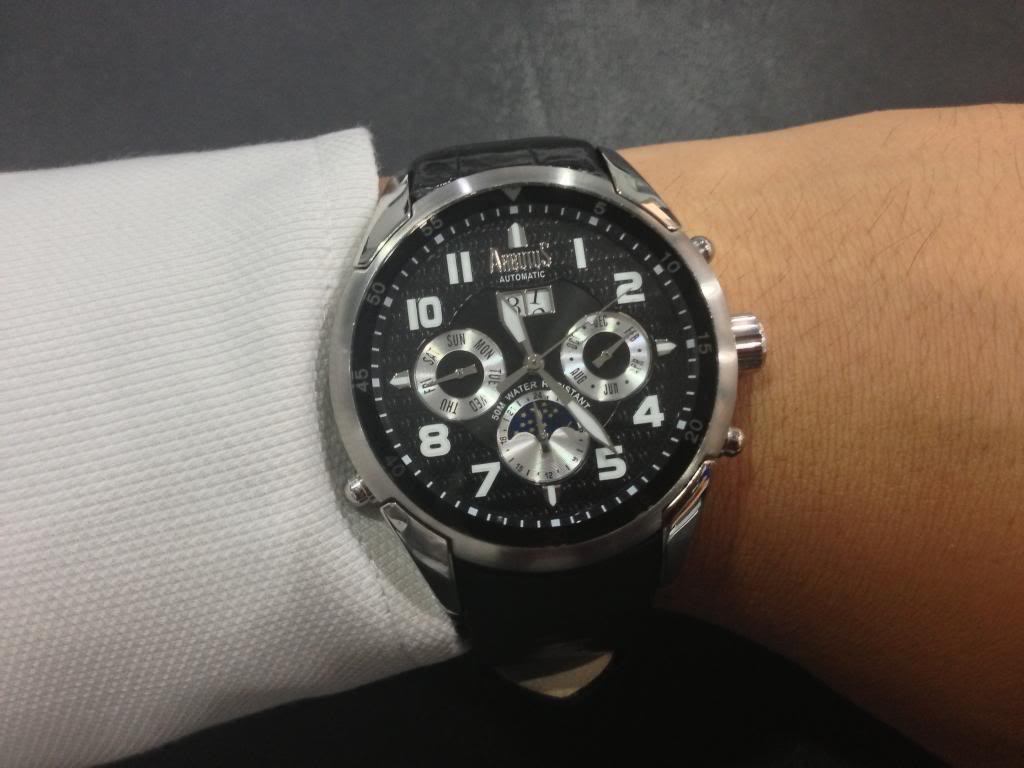 The watch that I decided on is an automatic silver on black sport watch with registers showing day, month, 24 hour time with day/night wheel and a big date display. The hands are silver, including the Arabic numbers and markers on the black dial. The dial is covered with a domed mineral crystal while the case back is an exhibition back.

The case is made out of 316L stainless steel, brushed with polished lugs. It is 40 mm in diameter and 14 mm thick. The strap is a 20 mm wide black leather with polished steel pushbutton deployant clasp.
Water Resistance is 50 meters. 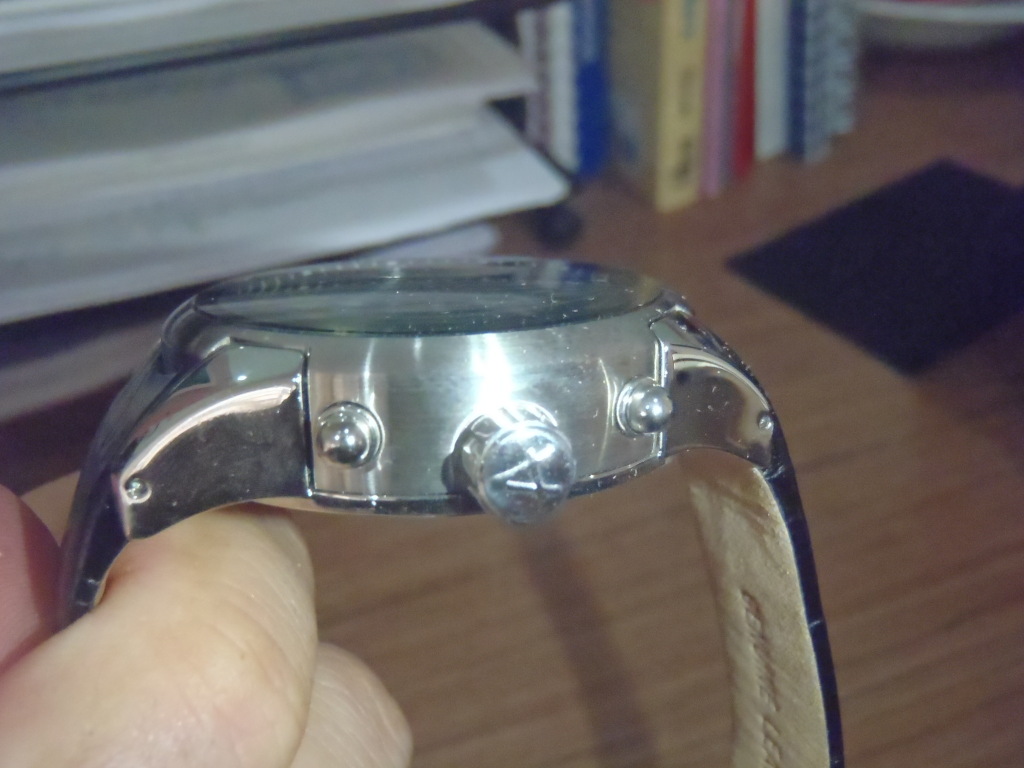 In the photo above you can see the domed crystal merging nicely with the watch casing. You will also notice the nipple-like pushers straddling the crown with a letter “A” etched on it. More about this later.

The lugs on the watch are not part of the overall watch case. It can be disengaged via screws found on the case-back. Due to the unique shape of the lugs, it will be difficult to find straps that could replace the stock.

This is a tall watch. Some people may not be able to carry it on their wrist. Meanwhile, there is another nipple-like pusher on the other side of the casing. 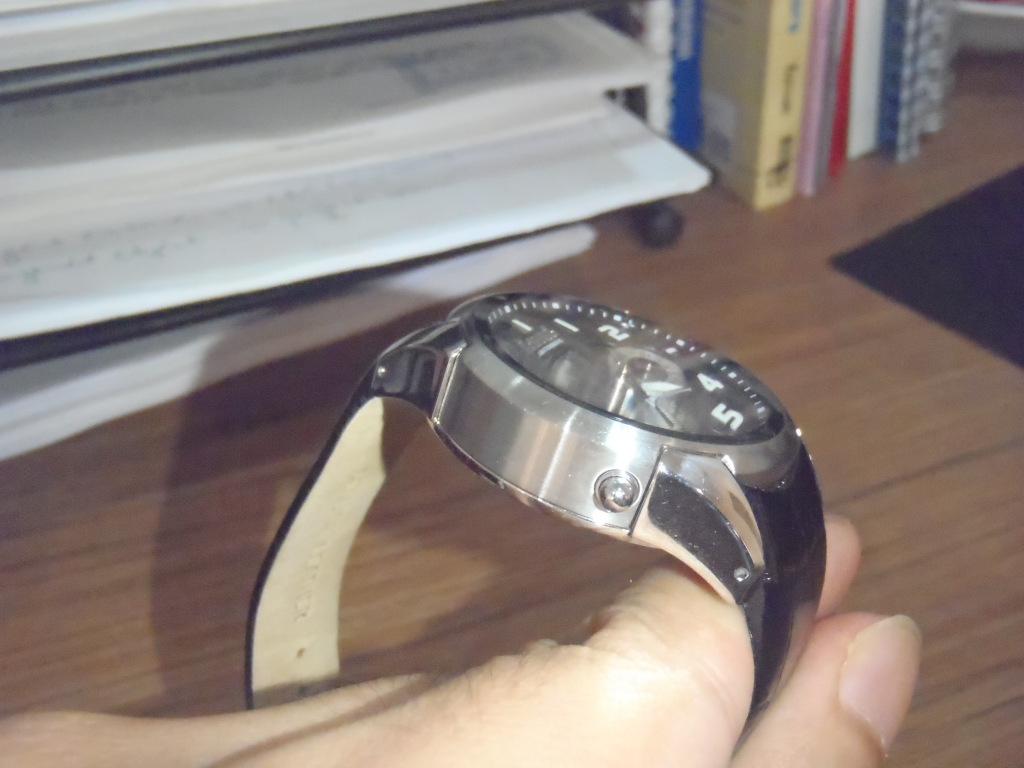 Arbutus states that the automatic movement used for this watch has a reference AA828-36-31 and uses 25 jewels. Arbutus does not claim the movement to be an in-house movement but it also does not provide any information regarding its origin either. I have assumed that it is a Chinese made movement by an OEM manufacturer. The quality of movement is not bad. It is also hand-wind capable.

As highlighted earlier, the watch has three sub-dials arranged like “Mickey Mouse” and date window at the 12 o’clock position. The three sub-dials from left to right are the day function, the 24 hour time with day/night wheel and a month function.

The crown is at 3 o’clock and there are three pushers at the 2, 4 and 8 o’clock positions. Below is a snapshot the instruction manual in 4 languages (to view clearer, click on the photo for a full blow-out). 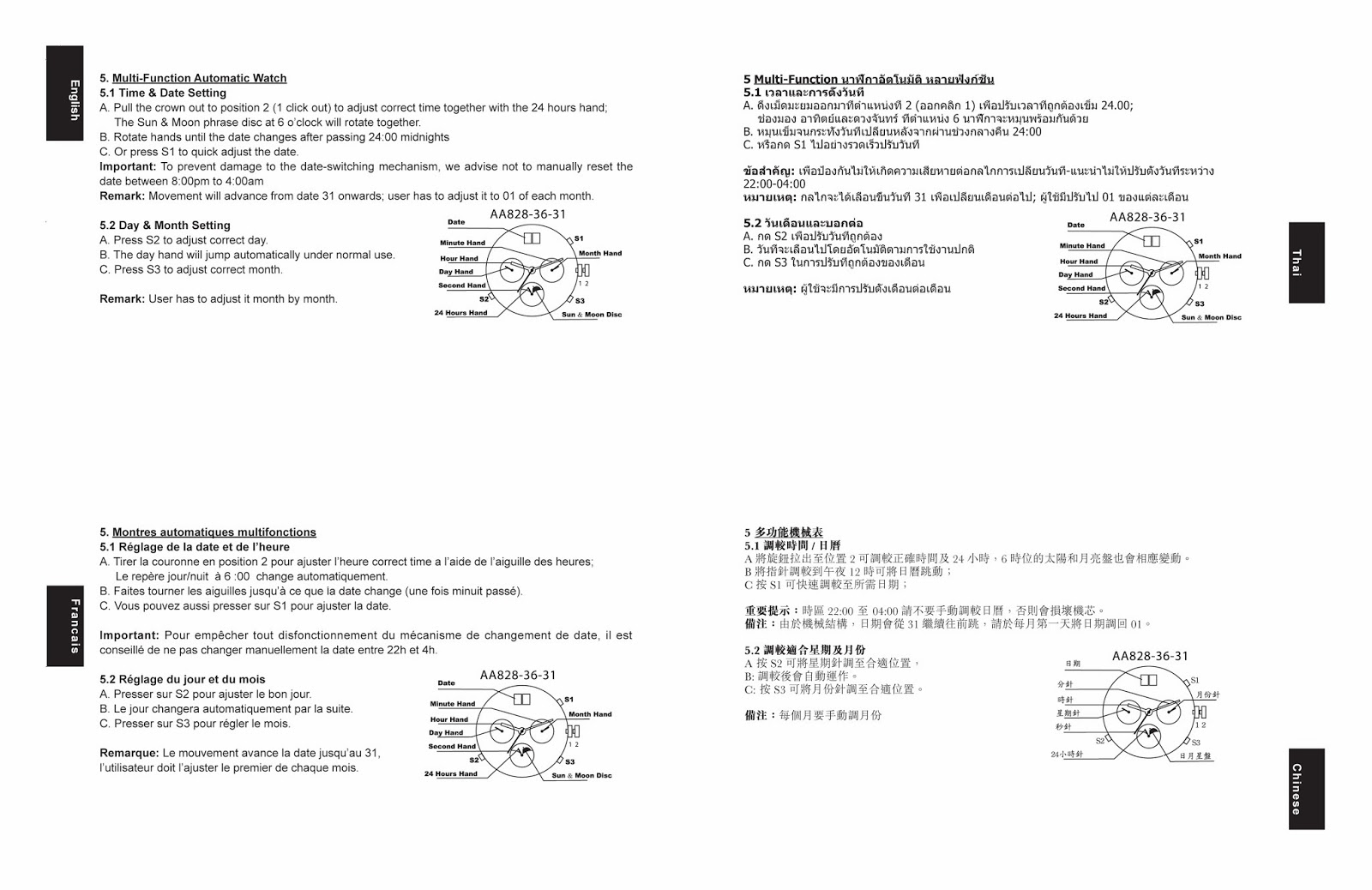 Meanwhile, below is the photo of the decorated rotor by Arbutus. 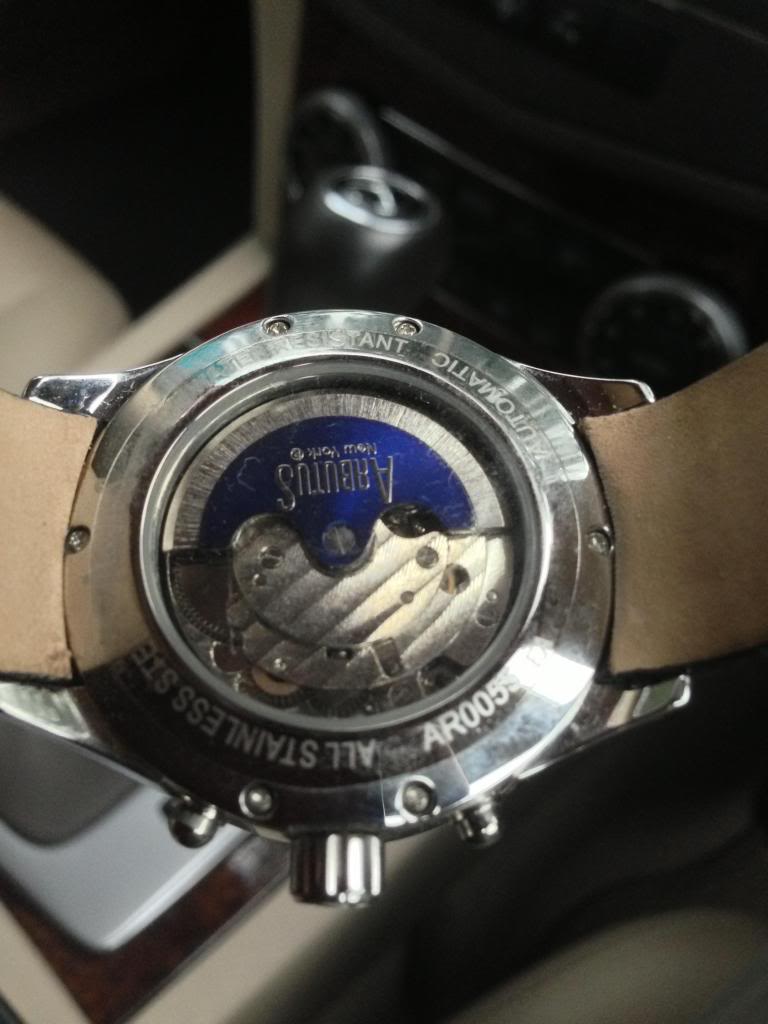 The watch looks very distinguish. Most people will be surprised to note the actual price of the watch. Coupled with the deployant clasp, it does not look out of place with well-known Swiss-made watches. 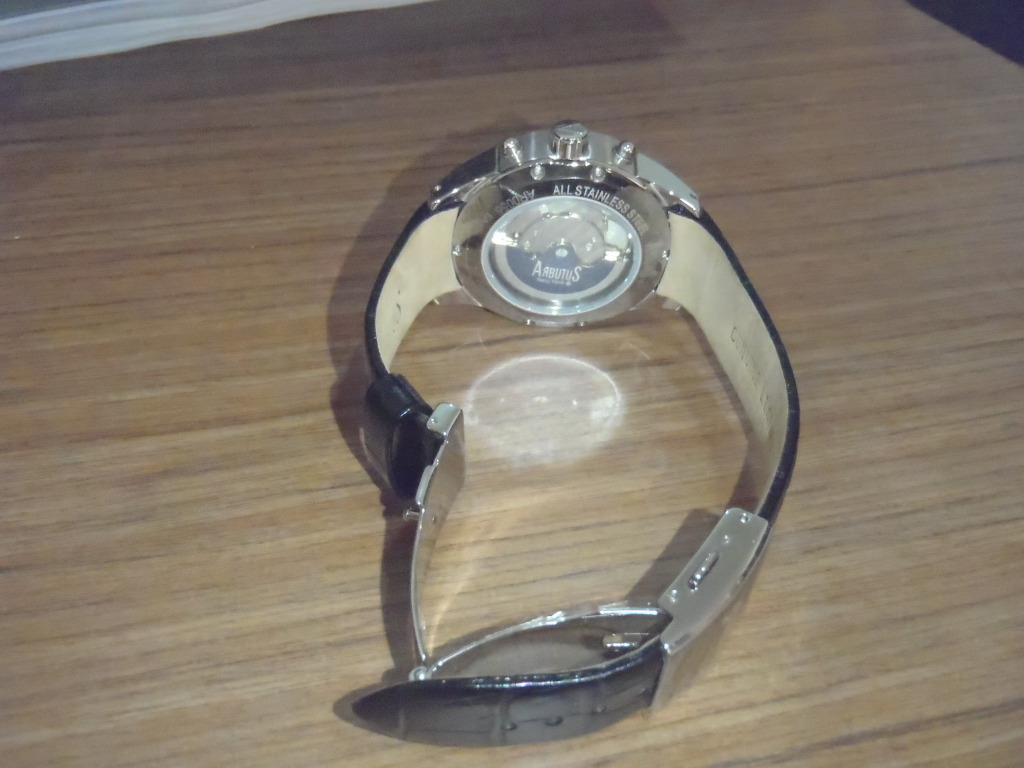 The crocodile leather (which I don’t think is real) completes the overall presentation. 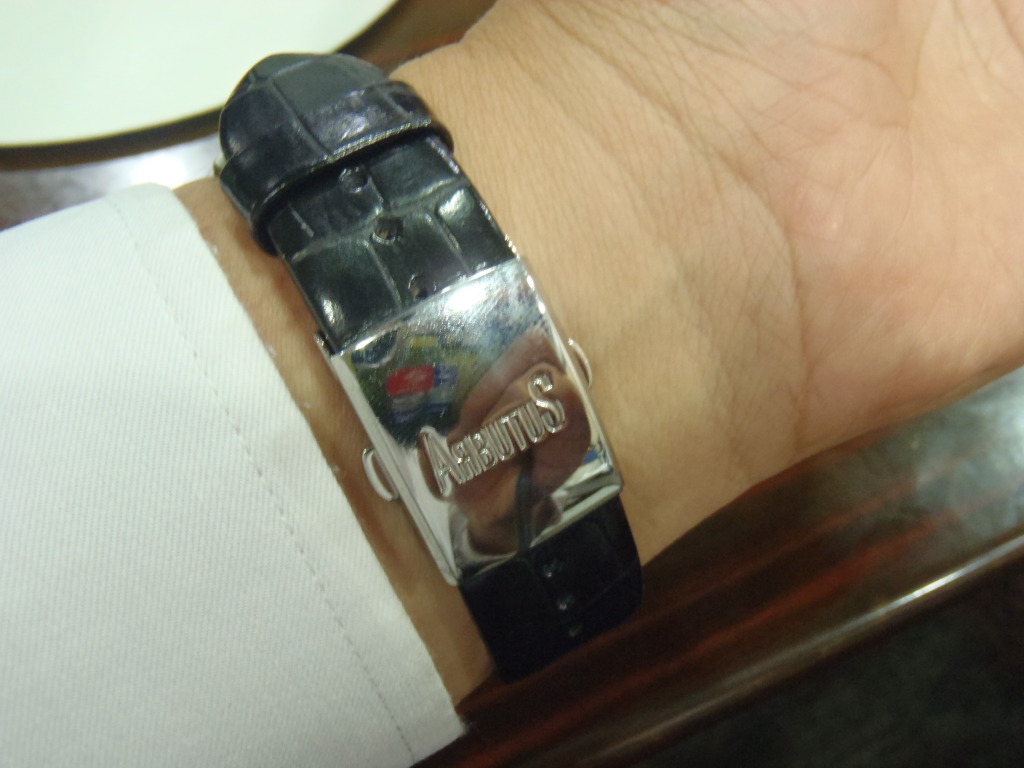 Overall, a nice and cheap watch to have with many “complications”. On hindsight, I don’t think I would get it if given the choice again. For more info, please visit arbutus-newyork.com