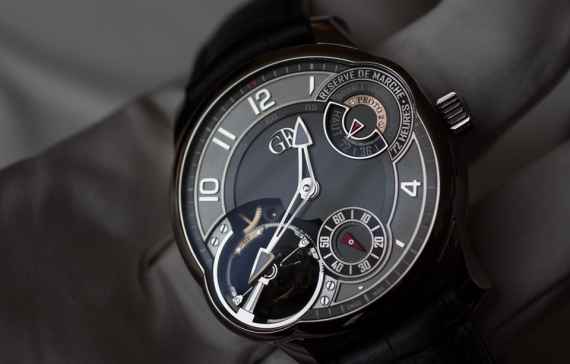 A New Interpretation of the Double Tourbillon 30 Degrees

The watch industry has much to offer and for those interested in timepieces with their inner mechanics visible for all to see, there is much more choice than ten/fifteen years ago. Similar to any other industry, there can actually be only one brand that is the absolute pinnacle and in this case that brand is Greubel Forsey. Their creations of time-telling pieces of art are simply exquisite and recently they introduced a new timepiece featuring their first Fundamental Invention, being the Double Tourbillon 30°.

In the summer of 2010 I visited Switzerland for Monochrome’s ‘Tour de Suisse‘ and I had my first encounter with the brilliant timepieces from Robert Greubel and Stephen Forsey. At the time the Double Tourbillon 30° Edition Historique had just been introduced and that one became the first Greubel Forsey timepiece that won a prize in the Grand Prix d’Horlogerie de Genève. This year Robert Greubel and Stephen Forsey present a new, asymmetric, interpretation of this double tourbillon that is inclined by 30 degrees, called the Double Tourbillon Asymétrique. For the new Double Tourbillon Asymétrique, the movement has been completely reconstructed, with the outer cage of the patented Double Tourbillon 30° inversed. The one-minute rotation of the inner tourbillon cage and the four-minute rotation of the outer tourbillon cage remain the same. The small seconds indication has been moved from the 9 o’clock position to the 6 o’clock position and the power reserve is now indicated by a rotating disk instead of a hand, but remains at at the 2 o’clock position. The individual number of each timepiece is engraved on a gold plate concentric to the power reserve indicator; in this case it was prototype number 2. The gold dial is finished in shades of grey, anthracite and black, with the two black minute rings positioned concentric around the satin-finished hour display, with applied polished white gold hour indexes. The hands and indexes are in harmony with their case – white gold or in red gold, depending on the version. For ideal legibility at night, the tips of the hour and minute hands have been filled with luminous material.

The Double Tourbillon Asymétrique is available in a unique edition comprising 11 pieces in white gold and 11 pieces in 5N red gold. The case measures 43.5 mm diameter and and 16.13 mm in height. The crystals, of course sapphire, are on both sides of the watch, as well in the lateral ‘bulge’ set into the case band. And that’s one of the superb details of the new Double Tourbillon Asymétrique; these opening offers a very special view of the double tourbillon system. The mainplates have been black treated, so that the tourbillon mechanism accentuates the three-dimensionality and depth of the double cages. The entire cage mechanism comprises no less than 130 components and all parts have been finished by hand. Take for instance the steel tourbillon bridge, which is flat black polished by hand.

The round gear train bridge is frosted, spotted (on the non visible side), with hand polished countersinks and polished bevels with a nickel-palladium treatment. The bright metal bridge juxtaposes superbly against the sobriety of the black-chromed mainplate. The bridge is fixed by four blued-steel screws and supports two white gold plates: one with the individual number of the timepiece; the other signed ‘Greubel Forsey’. The two in series configured mainspring barrels, which are finished in gold, provide a beautiful visual display, together with the gold center wheel. The mainplates in nickel silver (also called German silver) are frosted and feature straight grained flanks, hand polished countersinks and bevels, with a black chrome treatment. The entire manual-winding movement comprises 326 components and gets its power from two rapidly rotating mainspring barrels in series, which provide a 72-hour reserve of optimal power.This means that the power reserve is actually more, however the optimal power, for the best chronometric rates, is indicated. And that’s exactly what we expect from an ultra haute horlogerie brand like Greubel Forsey.

The tourbillon’s balance is with variable inertia screws and with Phillips terminal curve beating at 3Hz/21,600 vibrations per hour. A big thanks goes to our friends at Monochrome, for sharing this great article with us.