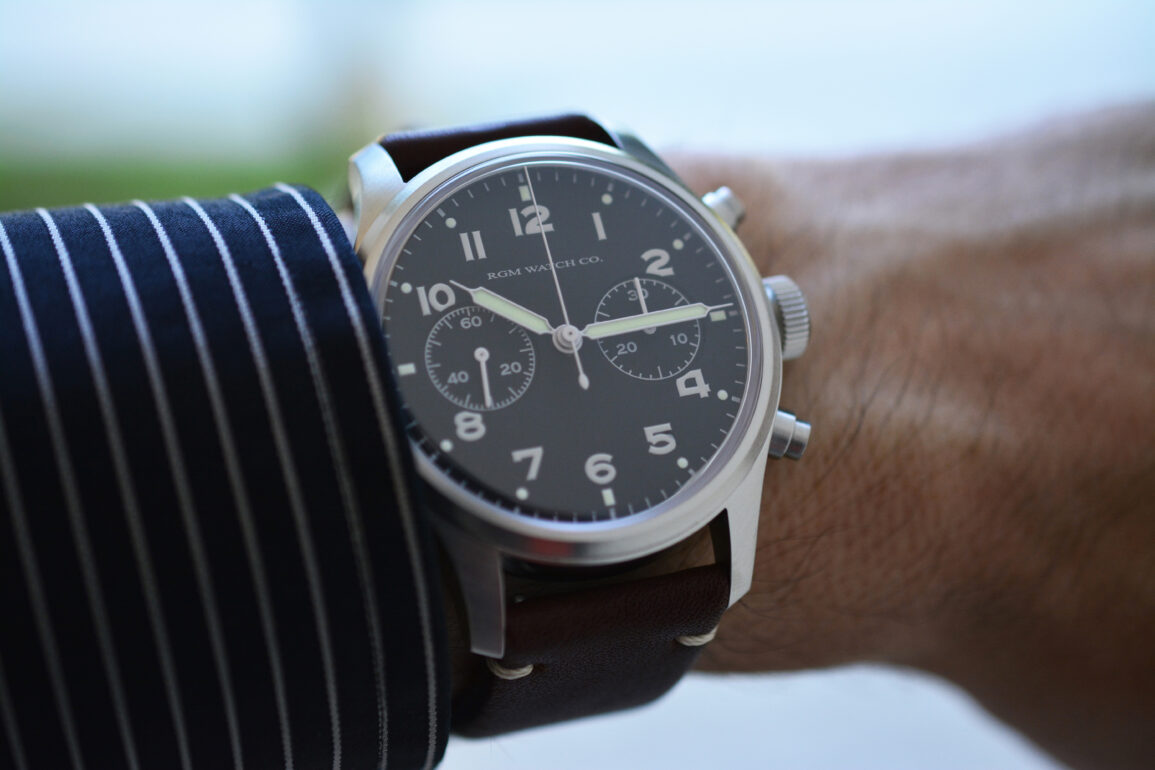 Take flight with a vintage-inspired pilot’s chronograph from a rare American watchmaker.

To say chronographs are ubiquitous is an understatement. They’re everywhere and just about every major brand carries them. As a result, it’s hard to stand out from the crowd with “just another” chronograph, so a key strategy these days is to look back at history. Vintage-inspired models have become all the rage and major players like Hamilton, Longines and Hanhart are happy to sell you a blast from the past at a reasonable price. RGM Watches, on the other hand, is a small independent brand that’s better known for fancy guilloché dials and pricey in-house production, but it recently released a back-to-basics chrono with a retro military vibe. 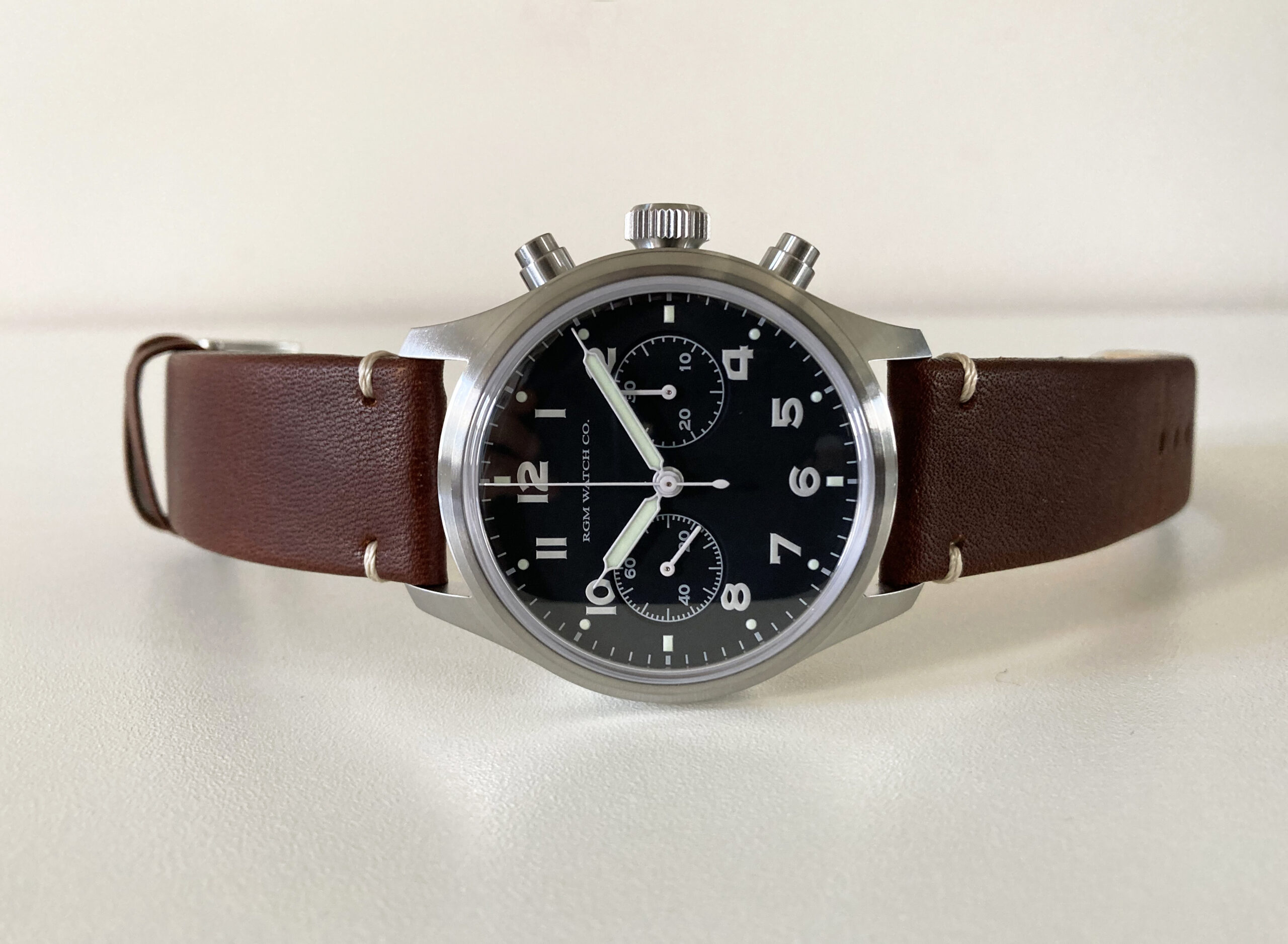 Founded by Roland Murphy in 1992, RGM isn’t the most familiar of brands and for all intents and purposes, it’s a low production luxury watchmaker. Headquartered in Lancaster County, Pennsylvania, it’s a world away from the horological capital known as Switzerland. Believe it or not, America was once a watchmaking powerhouse with brands like Hamilton, Waltham and Ingersoll in the first half of the 20th century. Times have certainly changed and American watchmaking was basically extinct when Hamilton ceased production in 1969. It was the last of the great American brands and continued life as a Swiss company, today under the auspices of the Swatch Group. After more than two decades, Roland brought true watchmaking back to the States and has since developed several in-house movements, including a tourbillon and tonneau-shaped caliber with a rare motor barrel. 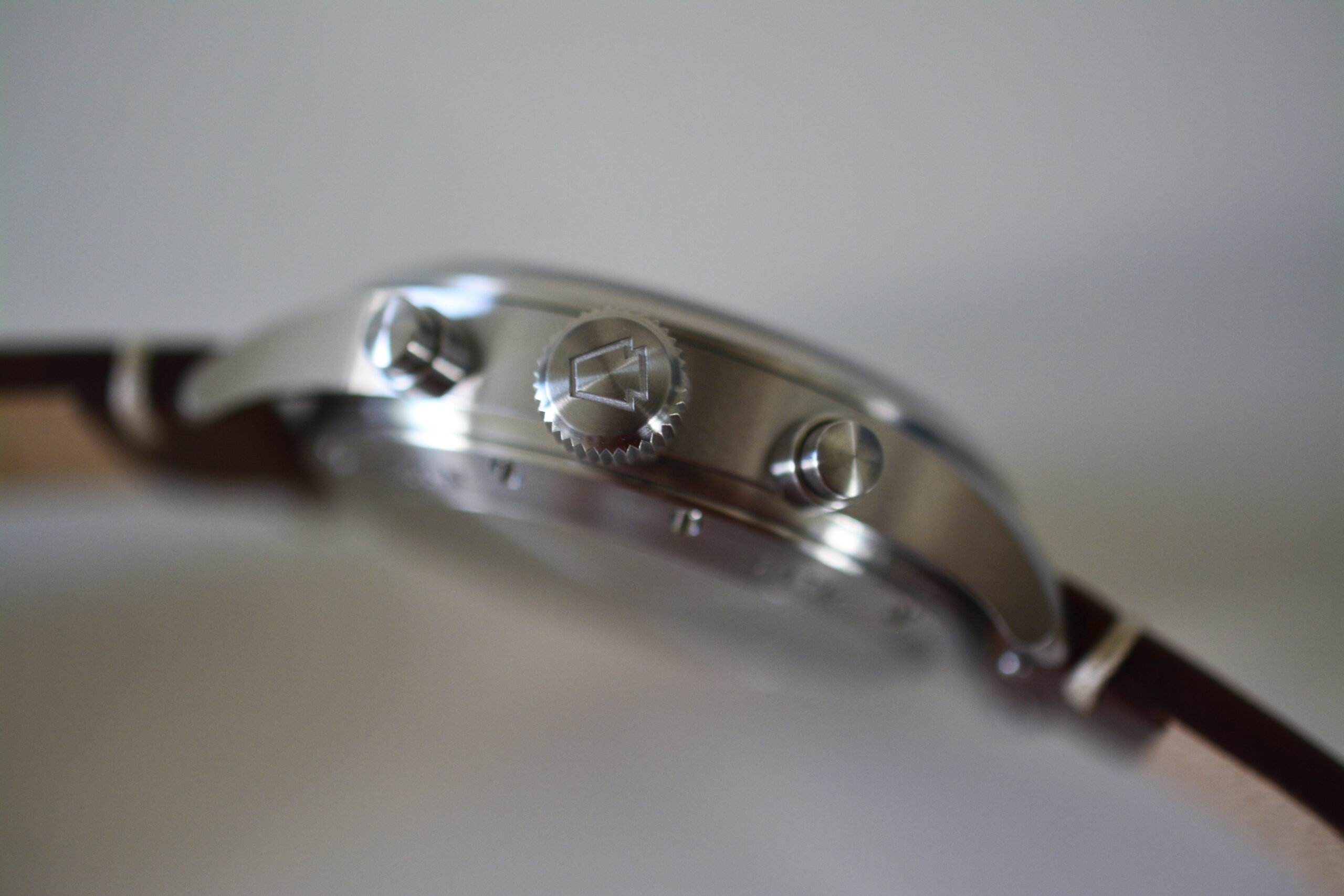 So, who is Roland Murphy? He worked in a clock shop’s cabinet making department in high school and quickly developed a passion for timepieces. After attending a technical school in Pennsylvania, he was accepted by WOSTEP (Watchmakers of Switzerland Training and Educational Program) in Switzerland in the mid-1980s. He later returned to Pennsylvania and worked for a division of Hamilton until forming his own brand in 1992 – the name of which is simply his initials. Like many startups, RGM’s watches initially had outsourced movements from ETA and the like, but it wasn’t long before the first in-house design launched. This 801 caliber put Roland on the same playing field as Swiss counterparts and he now has four movements under his belt, all hand-wound. RGM also offers fully bespoke watches, a rarity in the industry, along with comprehensive restoration services. Intricate guilloché and enamel dials are a specialty and Roland works with several antique machines alongside modern tech. In my years covering the watch industry, I’ve been fortunate enough to go hands-on with many RGM pieces and his in-house collections are works of art. He’s a true artisan. 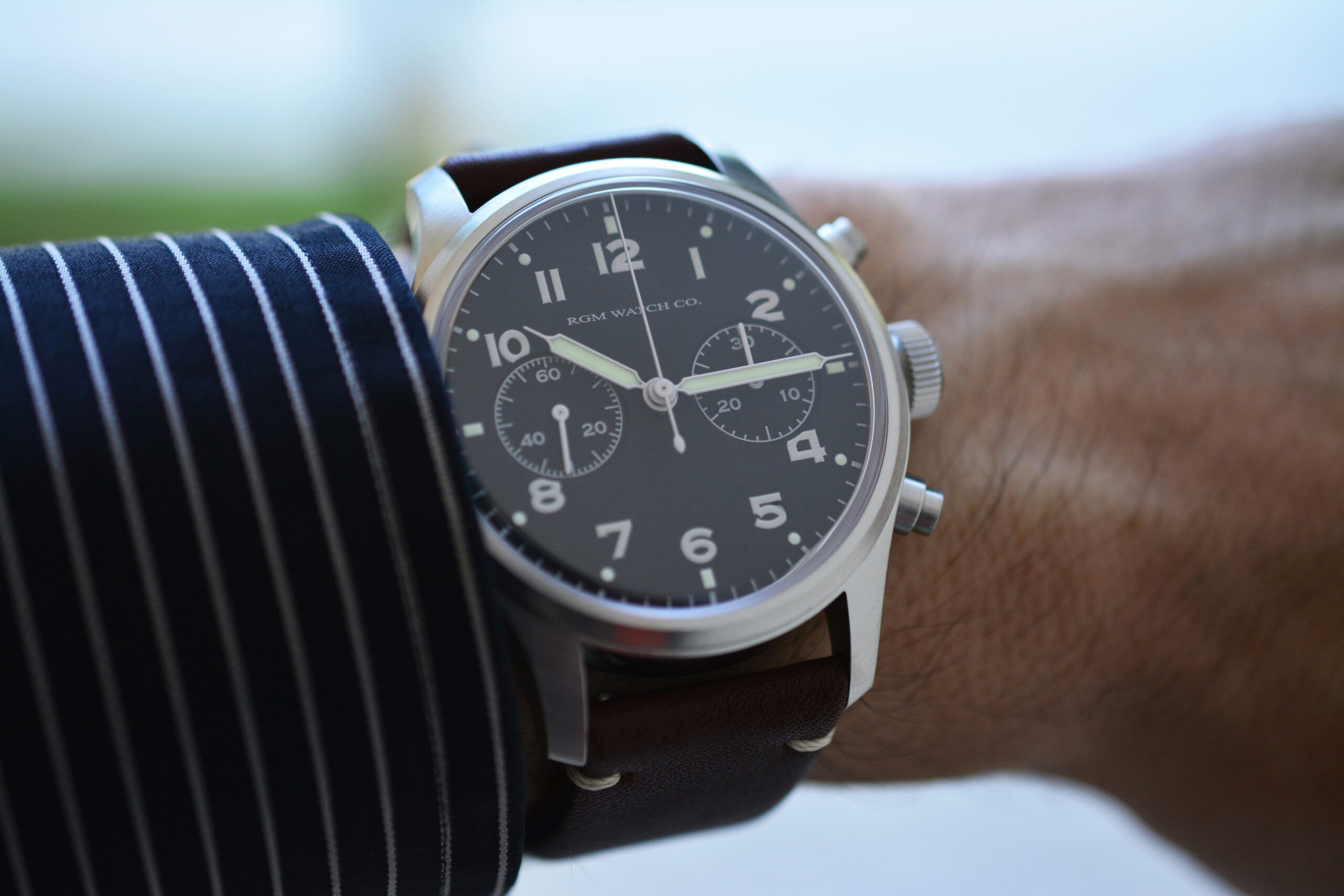 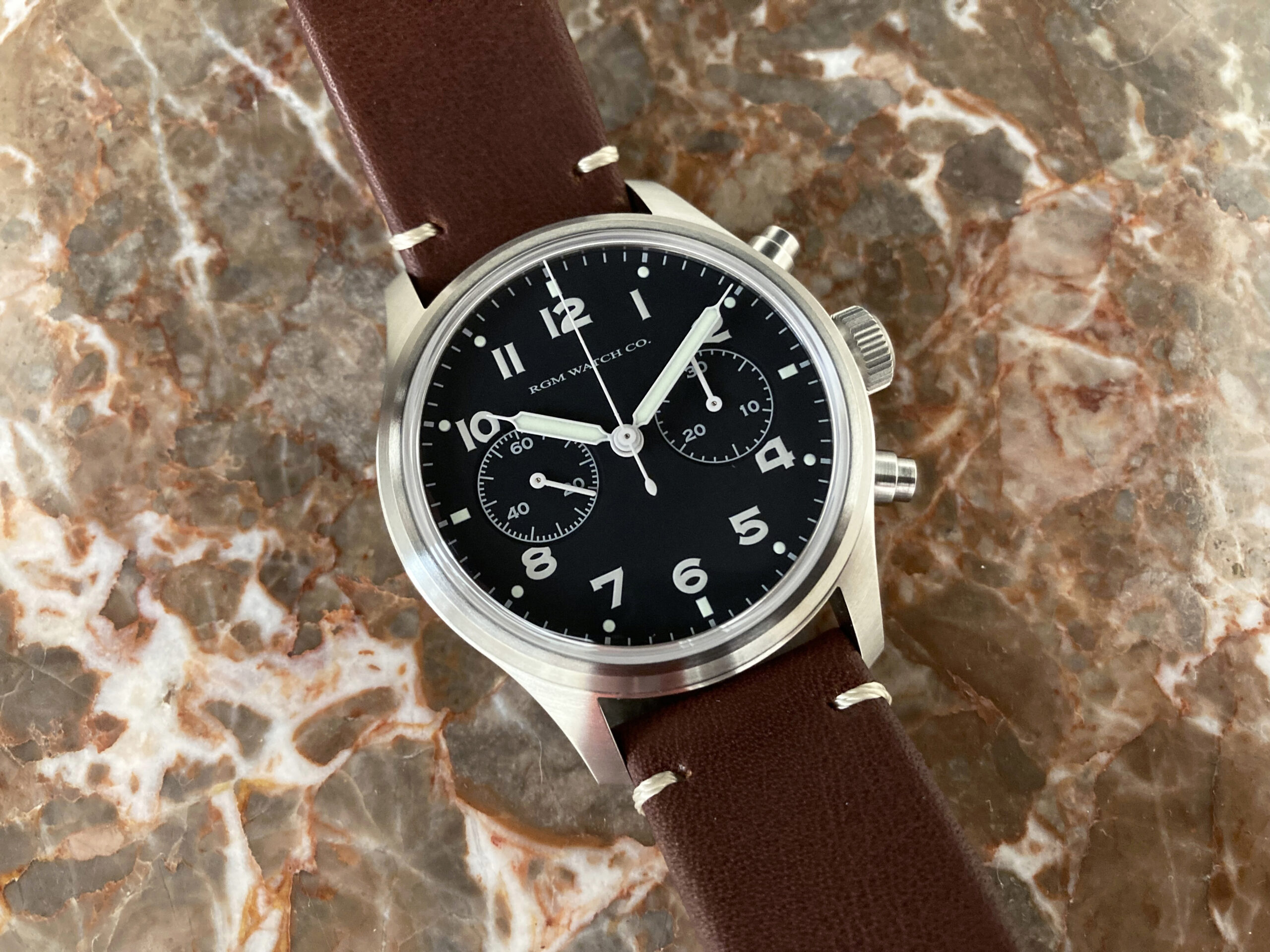 Looking at the Model 600 Chronograph, it’s not a fancy watch by any stretch. It has a simple design that would be right at home on the wrist of a 1960’s pilot. It isn’t the brand’s first chronograph as it follows the Model 455 Classic Chronograph with a 1940s aesthetic. The two share a similar price and movement, but are completely different animals. The case is 316L stainless steel with a contemporary diameter of 42mm and height of 14mm (with crystal), which is a bit large for the mid-20th century, but certainly ideal today. It’s also a little weighty, which I like as it gives it a substantial feel, but it doesn’t overwhelm the wrist. The case is brushed with a satin finish and has classic military pushers at 2 and 4 o’clock. The case back is solid, continuing the period correct look, and the flat crown is a bit oversized and predictably doesn’t screw down. Water-resistance is still a respectable 100 meters, so if you find yourself ejecting from a Douglas A-4 Skyhawk over the Pacific, your watch will be fine. 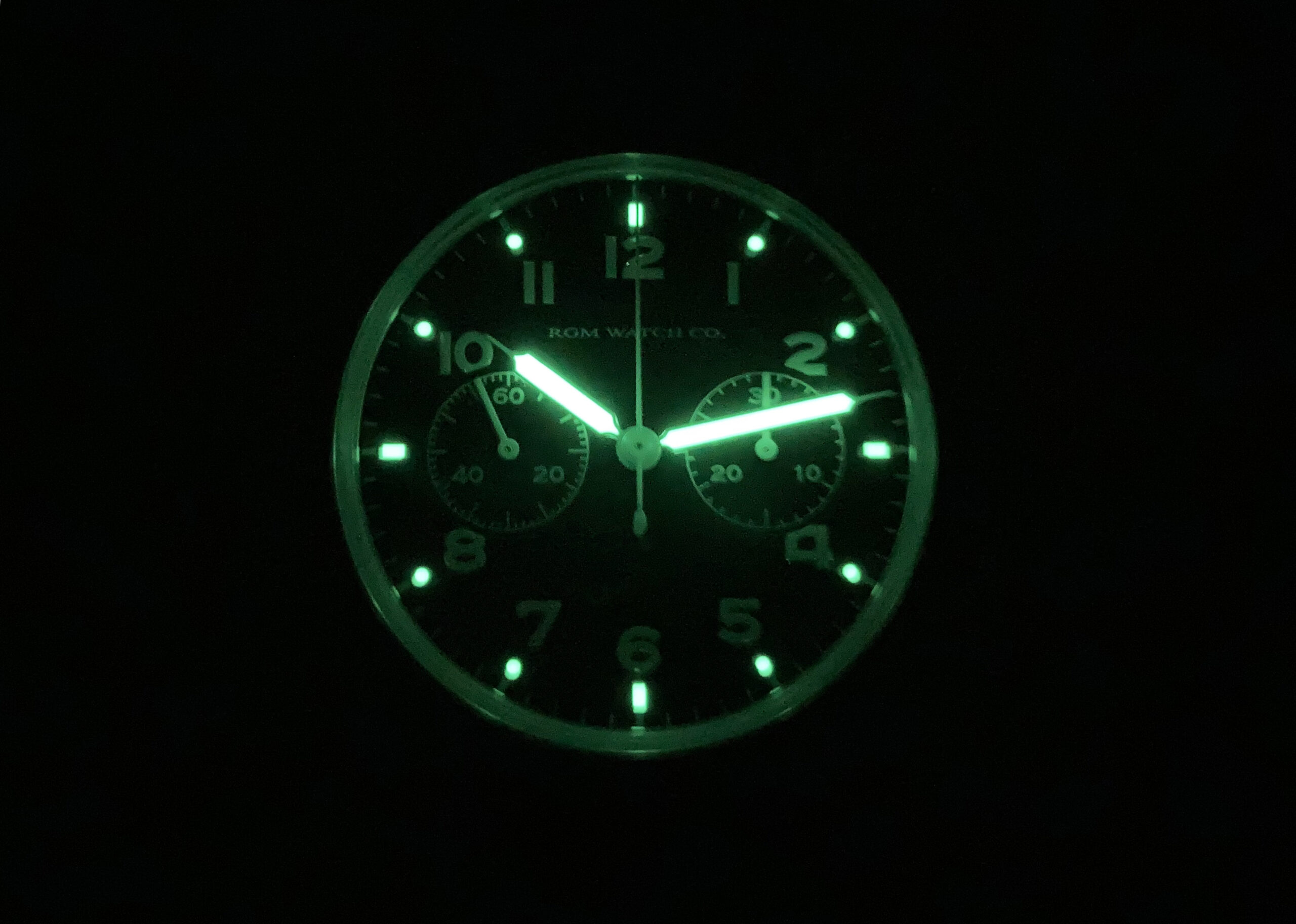 RGM has an ongoing theme with many of its watches, the keystone. This is the central wedge piece of an arch that locks everything together and the distinctive shape can be seen on the hands of the 801 Skeleton, Caliber 20 and more. On the Model 600 Chronograph, it’s engraved on the crown. The hands are a classic syringe style with X1 Super-LumiNova, while the oversized Arabic numerals have a period correct font and matching Super-LumiNova. This is a bi-compax chrono with a white 30-minute counter at 3 o’clock and small seconds at 9 o’clock, and a white central seconds counter. It’s unusual given the movement, but more on that below. The stopwatch function starts and stops via the top pusher, and resets with the bottom. The base dial is matte black and contrasts well with the white elements, and it all culminates in a visually ideal setup for military/pilot applications. A minute track spans the outermost perimeter with spots of lume every hour and the dial is void of unnecessary enhancements (there’s not even a date). This is a tool watch through and though. A nice touch is the raised, box-style sapphire crystal that shows a retro distortion at sharp angles. 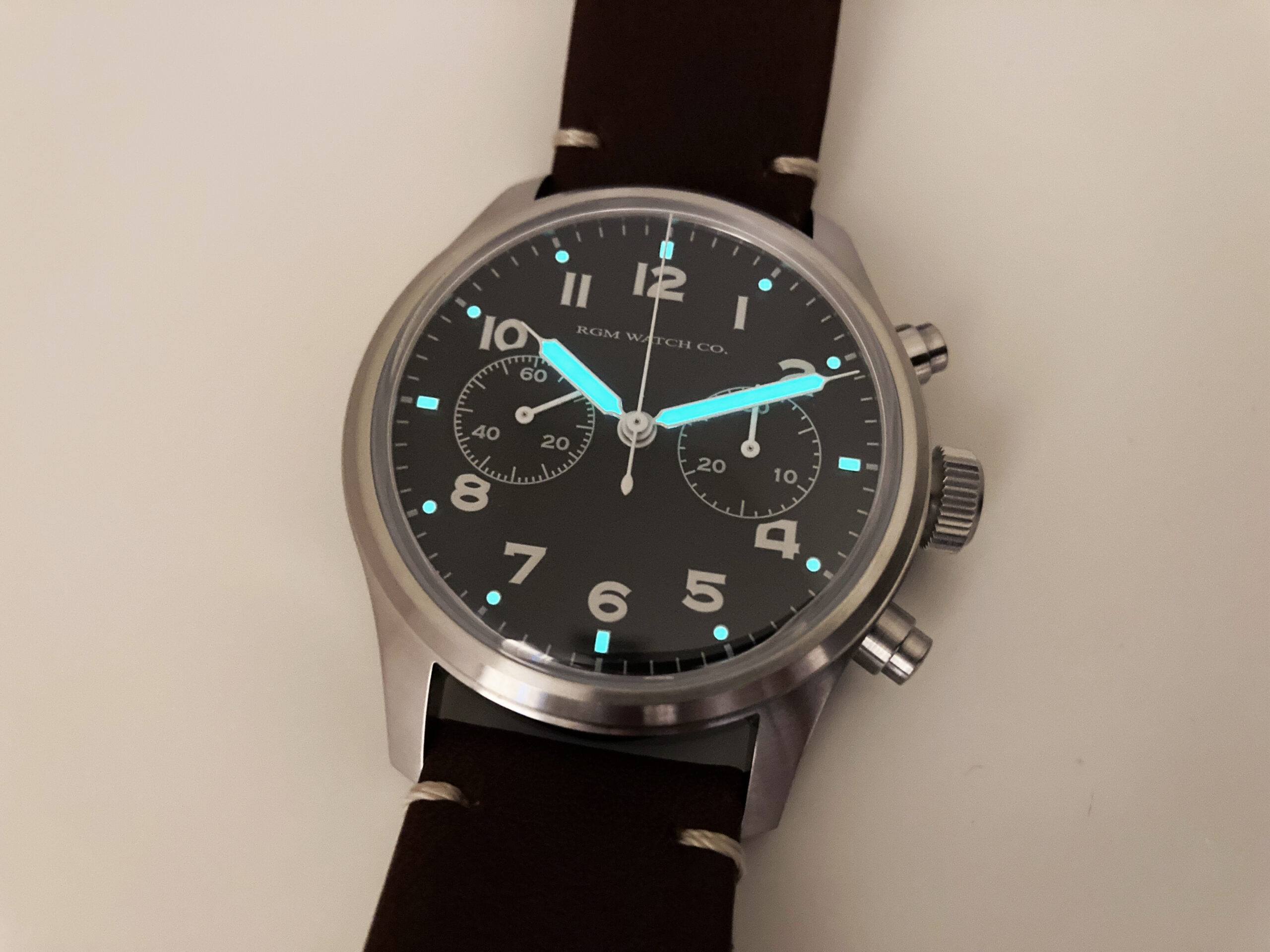 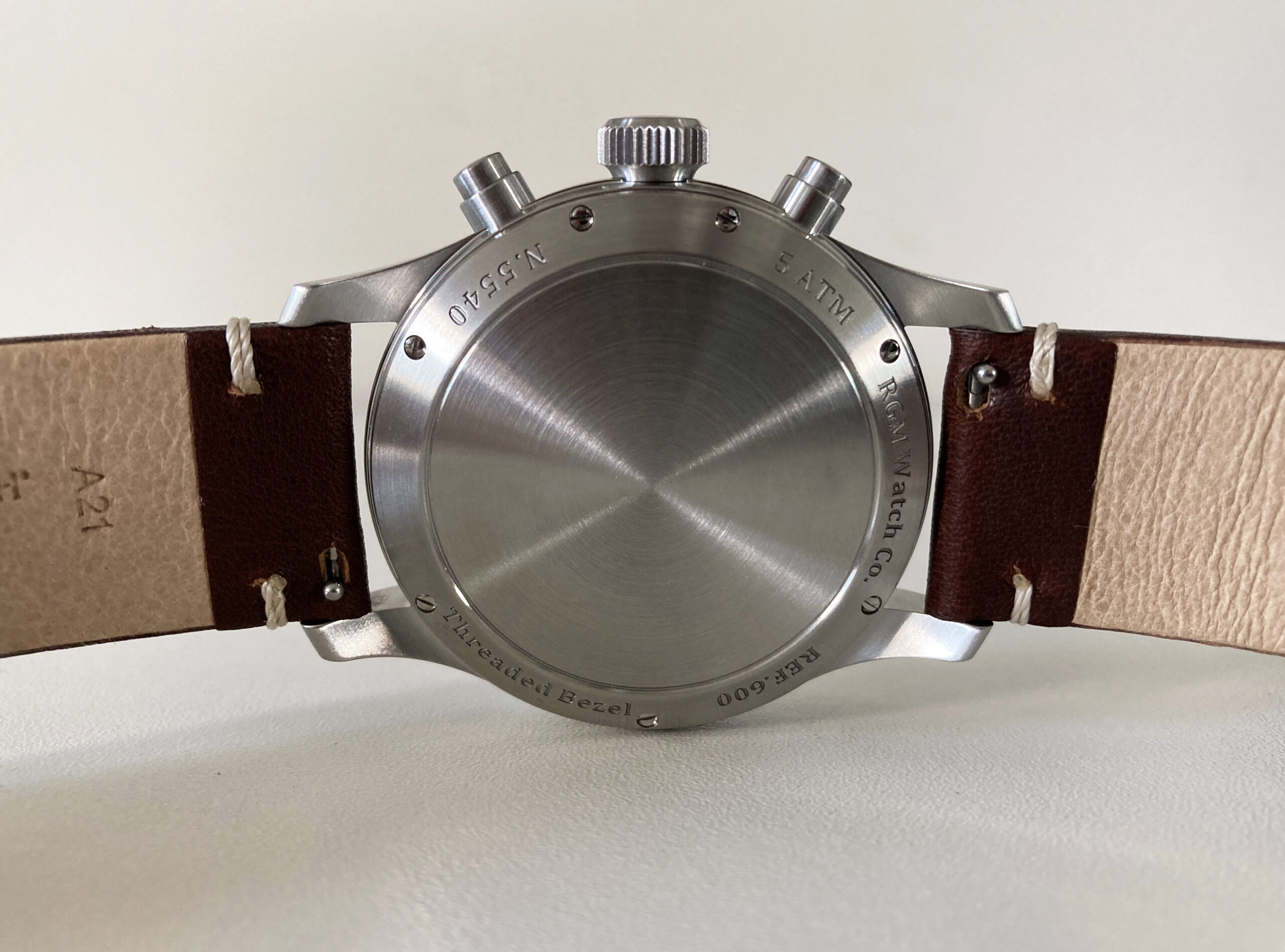 Unlike an RGM pilot’s watch like the 801-A Aircraft, the Model 600 doesn’t carry an in-house movement. This keeps the price down and certainly isn’t detrimental to performance. What we have is the well-proven ETA/Valjoux 7753 automatic, which is a cam-type chronograph. It’s been modified as the base movement has three sub-dials and date at 6 o’clock with it’s own recessed pusher. It might sound strange to actually remove features, but it keeps the design clean and again period correct, and requires extra skill from RGM’s watchmakers. The movement has 27 jewels, beats at 4Hz (28,800vph) with a 48-hour power reserve. It’s well finished with Côtes de Genève and is rhodium plated, but concealed behind the case back. 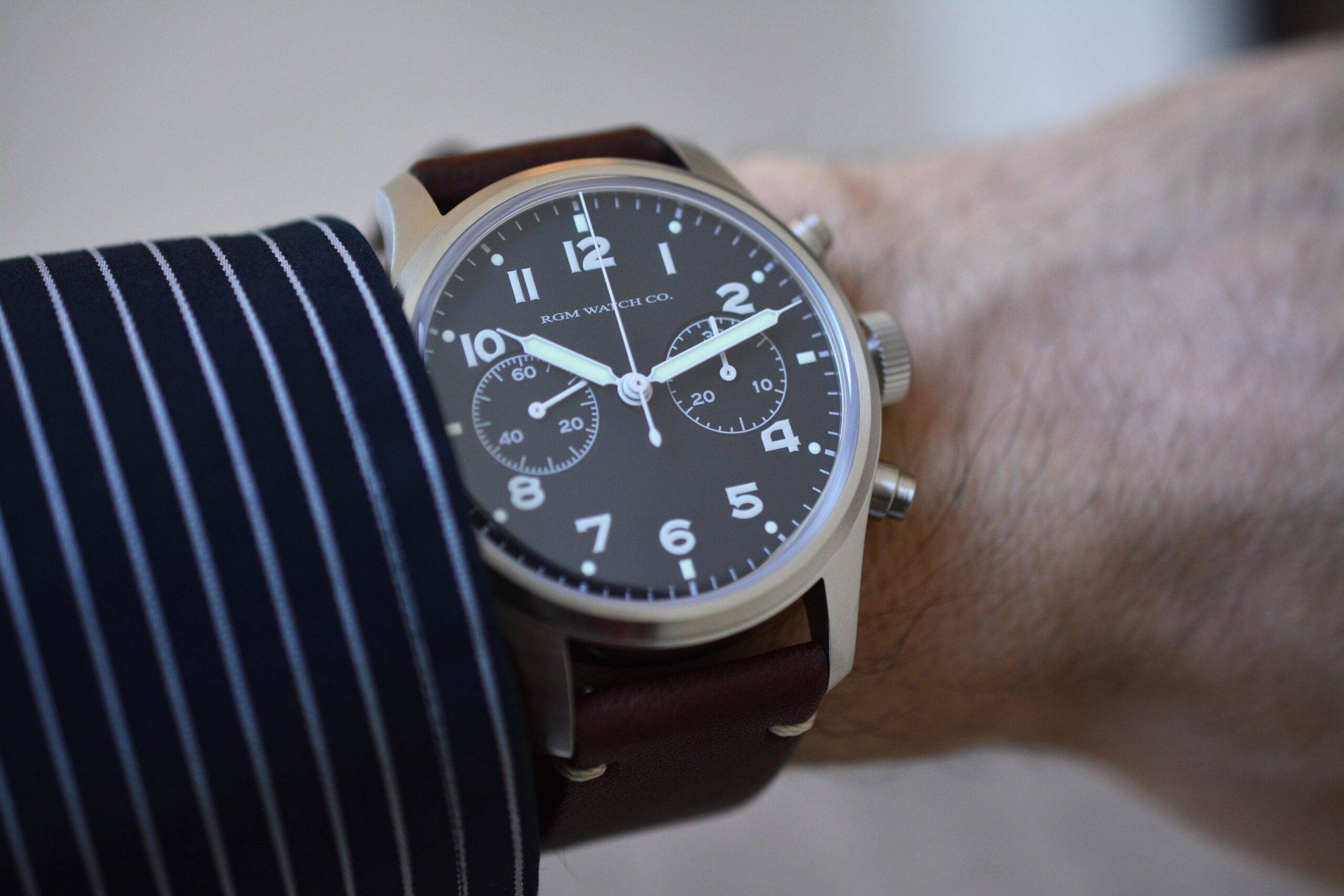 You’ve got to attach it to your wrist and that’s achieved with a 22mm brown leather strap with white stitching. It has a rustic look and matches the piece well, and fastens with a signed steel pin buckle. For those with small wrists, this one fits just fine (watches in general tend to come with comically large straps, which is not the case here). 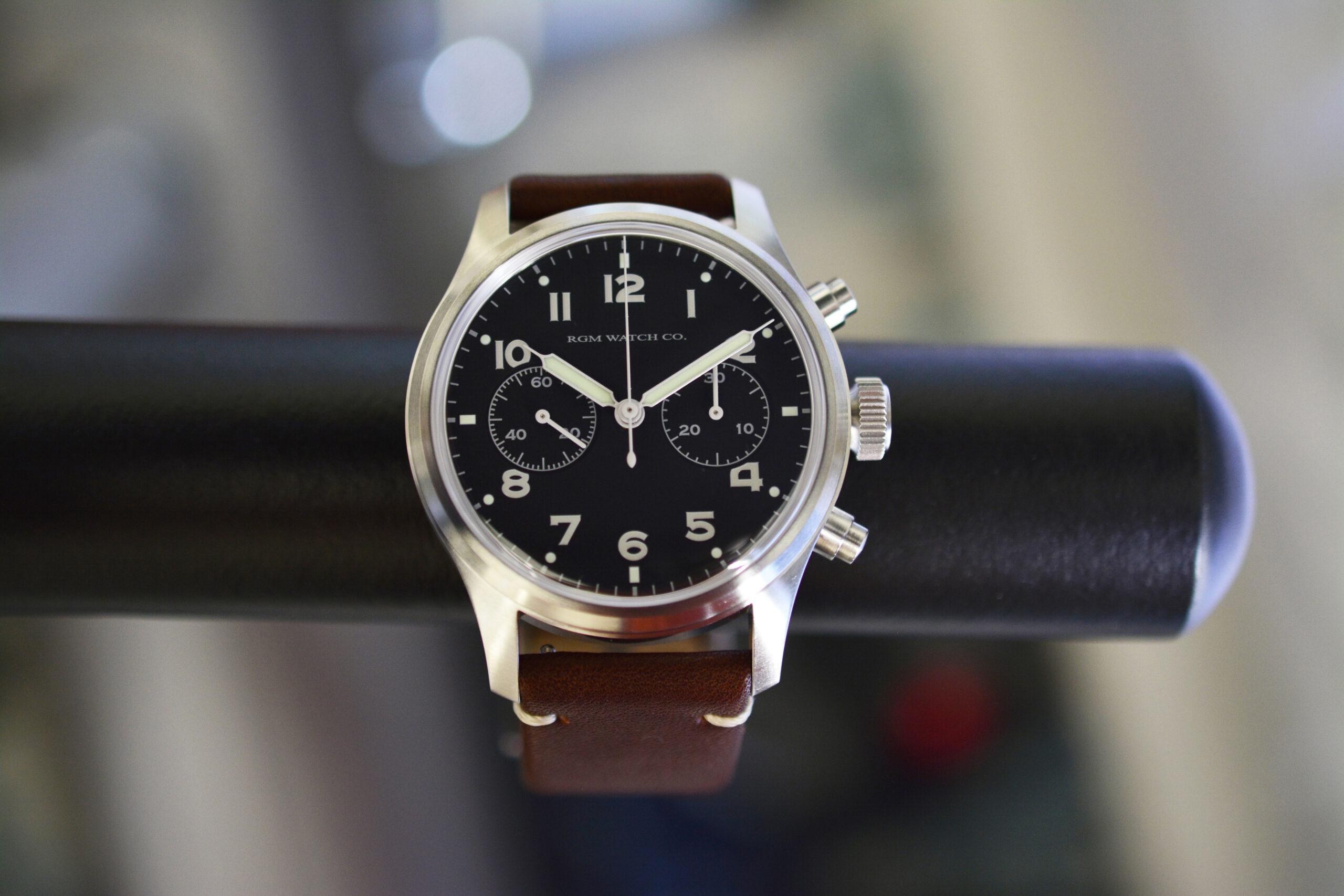 And now we come to the price, which is neither cheap or outrageous. It retails for USD 4,250, which is almost double the price of a comparable piece like the Hamilton American Classic Intra-Matic Auto Chrono. However, RGM is a much smaller independent brand with low production across the board – the polar opposite of Hamilton with resources from the Swatch Group. Is that enough to justify the price? I think so as it has a handmade feel, authentic military vibe and genuine scarcity, and comes from a small workshop in Pennsylvania. You’ll probably be the only one in the room wearing one, which adds appeal in my opinion. Your mileage may vary. You can order one direct from RGM’s website and the company accepts trade-ins toward purchases as well.