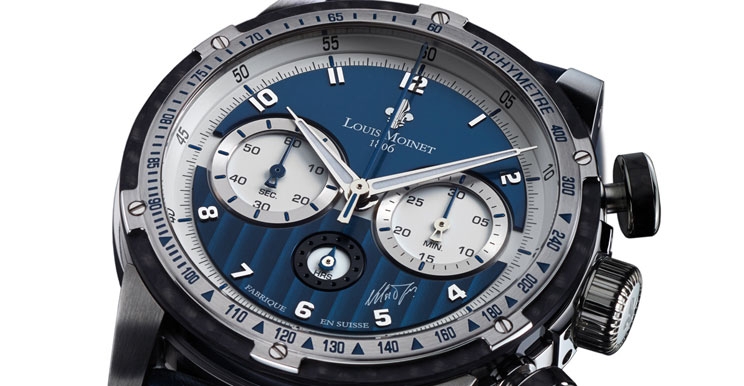 The Nelson Piquet – celebrating a legend

The Legends collection features timepieces developed in partnership with an iconic figure who has made an indelible mark by excelling at the highest level in their respective field. Louis Moinet launches the collection with an exceptional model celebrating legendary racing driver Nelson Piquet.

Available in an exclusive limited edition of 365 pieces, the Nelson Piquet is a sporty, two-pusher automatic chronograph celebrating the three-time Formula One world champion. The Nelson Piquet boasts a clutch of racing-refined features including a driver-friendly rubber strap; high-visibility hands; a tachymeter scale on the high-tech steel and carbon fibre bezel; chronograph pushers inset with carbon fibre and adorned with chequered flag motif; and display-back engravings evoking Piquet in his prime.

The Nelson Piquet’s dial and functionality have been designed specifically with racing drivers and motorsport enthusiasts in mind.

The dial is highly legible with bright counters and bold hands and numerals contrasting superbly against a navy blue backdrop. Rhodium-plated central hour and minute hands – filled with white Super-LumiNova that glows an eye-catching green in the dark – are accompanied by highly-reflective, metallised hour indices and small seconds at 9 o’clock.

The central chronograph hand is complemented by a seconds chapter ring (measuring intervals down to an impressive quarter of a second), 30-minute counter at 3 o’clock and 12-hour counter at 6 o’clock. The counter hands are in a striking blue tone. What’s more, speed or distance can be calculated using the tachymeter scale engraved on the bezel to monitor racing performance.

All three subdials are set off by the dark blue background. The lower half of the dial features Geneva wave finishing reminiscent of the vertical grill design found on historic racing cars. The dial is completed by the Louis Moinet logo at 12 o’clock and, of course, Nelson Piquet’s signature at 5 o’clock.

The blue and white on the dial transports the observer back to the halcyon days of Formula One when Piquet was a dominant force: The winning colours conjure up images of the iconic Brabham cars in which Piquet raced between 1978 and 1985 – and in which he won the 1981 and 1983 Formula One drivers’ championship.

Carbon fibre is also used to form the inserts for the chronograph pushers at 2 o’clock and 4 o’clock. To enhance grip, the pushers have been engraved with a chequered motif reminiscent of the iconic Formula One finish-line flag that Piquet took in his 23 F1 grand prix victories. The pushers take the form of champagne corks for a ‘podium finish’ experience – and in the case of Nelson Piquet that means a lot of bubbly: The Brazilian had 60 podium placings during his 13-year career in Formula One!

Turning the Nelson Piquet over, the tinted sapphire crystal display-back reveals beautifully finished plates and bridges as well as a distinctive open-worked, black rhodium-plated, ball bearing-mounted rotor, the design of which echoes that of a high-performance car brake disc.

Around the periphery, a winner’s wreath is engraved – extremely appropriate because, as the accompanying inscription reminds us, Nelson Piquet is a three-time Formula One world champion.

The Nelson Piquet is available in a limited edition of 365 pieces. It is presented in a deluxe case with black, carbon fibre-inspired interior, along with a beautiful 95mm x 70mm reproduction of a watercolour painting of Piquet in his Brabham and Williams cars by renowned motorsport artist Willy Richard.

The Nelson Piquet has received a Red Dot design award, one of the world’s most prestigious design industry prizes. This coveted distinction is awarded by a jury of design experts at the Design Zentrum Nordrhein Westfalen in Essen, Germany.The Nelson Piquet is the fifth Louis Moinet timepiece to have won a Red Dot Design award and joins Geograph Rainforest, Tempograph, Jules Verne Instrument I and Geograph in a permanent display at the Red Dot Museum in Essen, the largest exhibition of contemporary design worldwide.

Nelson Piquet has etched his name in motorsport history thanks to his consummate skill, physical stamina and mental strength that have contributed to his masterly performances on the racetrack. Born in Rio de Janeiro, Brazil in 1952, Piquet is one of the leading figures of what was arguably the golden era of Formula One, during the 1980s, when breath-taking battles and fierce rivalries on and off the track created a compelling spectacle on a sporting and human level. Piquet’s exceptional talent was such that he claimed three Formula One world titles between 1981 and 1987. In recognition of his immense achievements, he was inducted into the International Motorsports Hall of Fame in 2000.