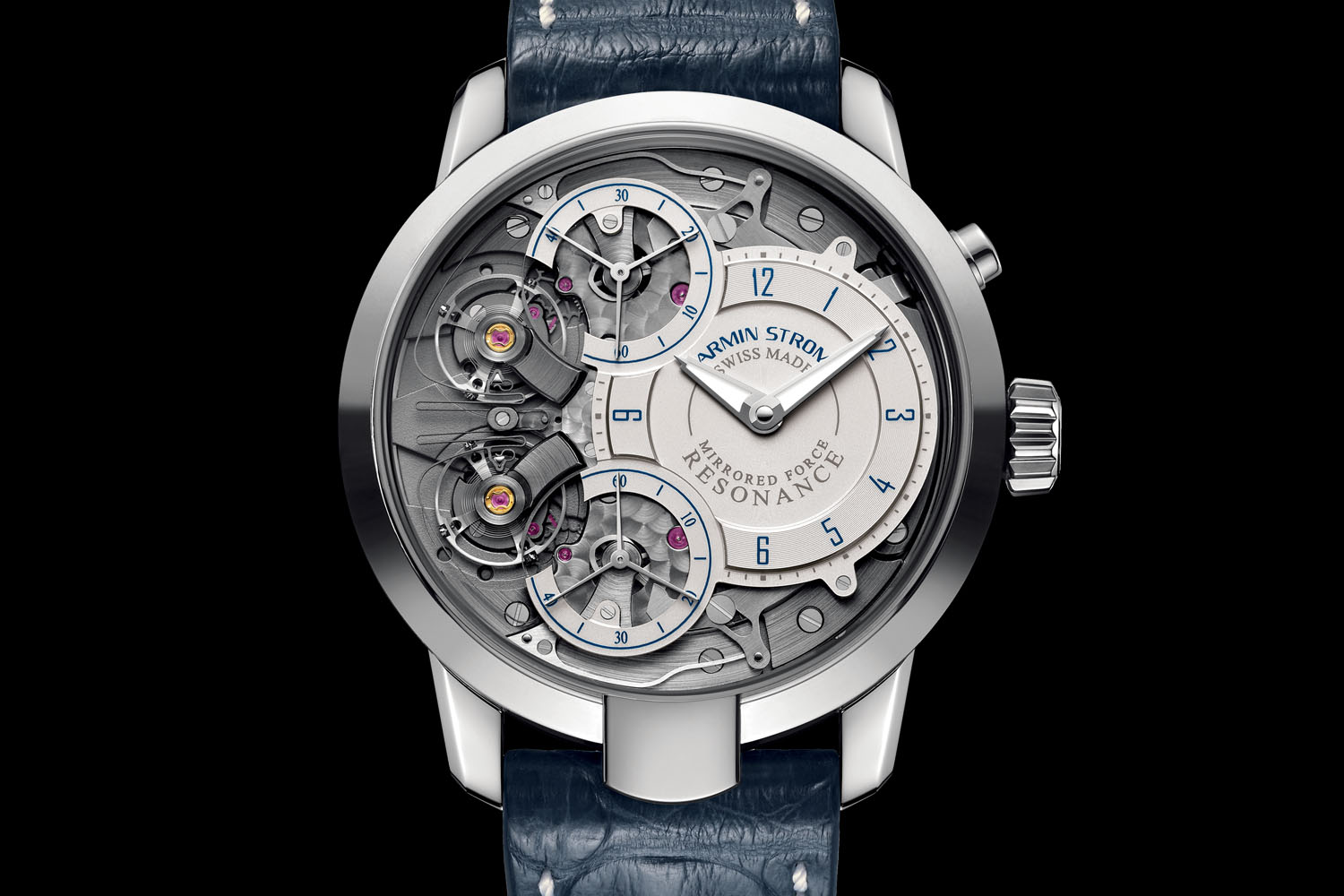 The Armin Strom Mirrored Force Resonance previously comes only in gold and for a good reason. This watch is marvelous and has been developed by proper watchmakers such as Astide Janvier and Abraham-Louis Breguet but it was originally conceived by Christiaan Huygens. Now in the hands of Beat Haldimann and François-Paul Journe, the revolutionary watch (we will know this later) sees yet again a retouch, in Stainless Steel. The change may be for the looks or perhaps for a better market reach since to be honest, not all watch fanatics are a fan of gold accents.

Talking about being revolutionary, the Armin Strom Mirrored Force Resonance’s caliber ARF15 solves the problem of having two independent gear trains and two independent oscillators with no mechanical connection. The ASMFR’s caliber ARF15 ingeniously uses a steel resonance clutch spring connected to the balance spring studs thereby resulting to a better connection for the oscillators thus producing perfect resonance effect for the watch. The advantages of this system is immense but for the layman, the watch is simply precise to the dot. 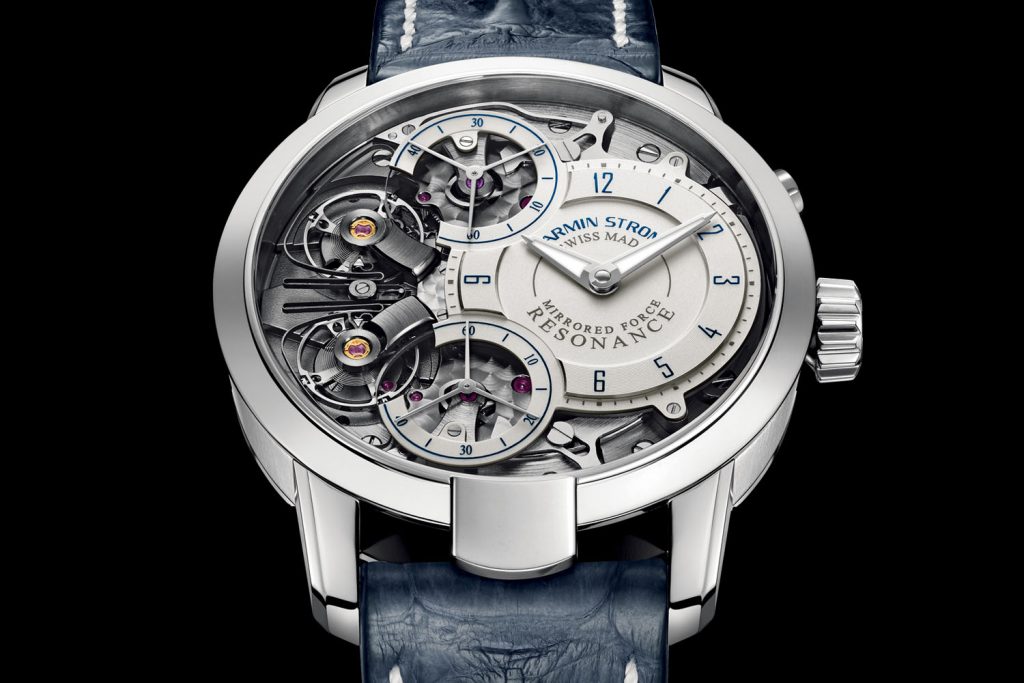 Now on the aesthetics side, the Armin Strom Mirrored Force Resonance is simply majestic. It is mechanical and there is no doubt that it stands out on its own. The 43.4 mm case is not that huge but its clear lines and elegant lugs are superb. The distinct crown looks subtle and it doesn’t mar the practical design of the pusher at 2 o’clock that resets the twin-second hand. Another design element that is a distinguishing feature of this watch is its case protrusion at 6 o’clock. To us it kind of looks like a tongue sticking out for others trying to keep up to its superb tech inside, well that’s just us. 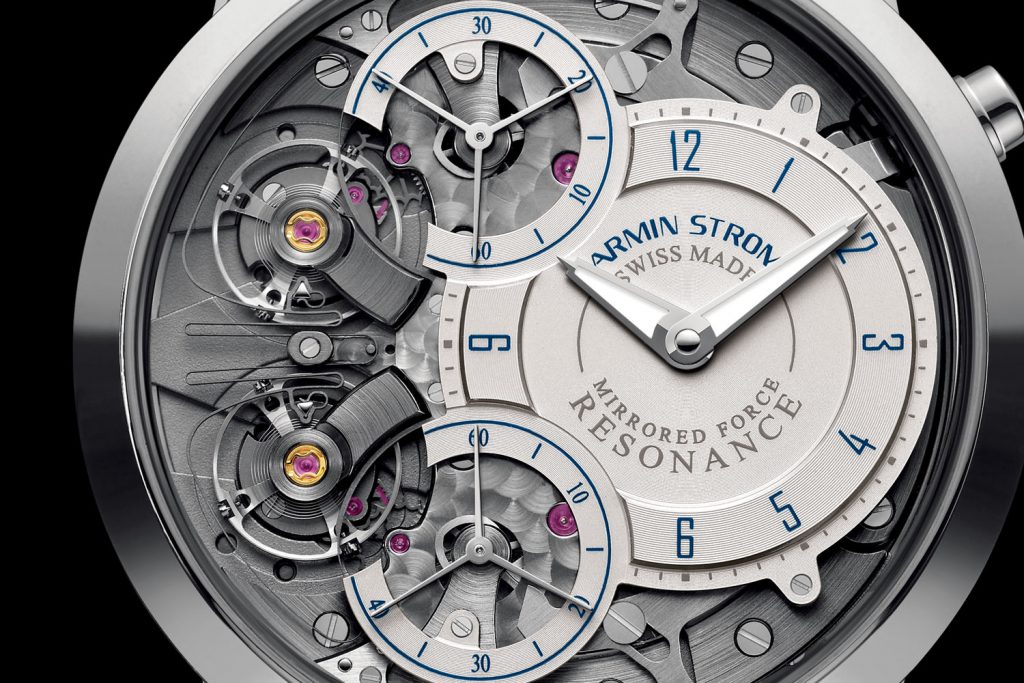 Moving on, we can see pretty much everything on the watch face. It perfectly marries good traditional and skeletonized display. The beautiful two oscillators with the connecting spring are visible on the left dial. We like the design harmony here and there are no off-centered elements (perfect for the OC people out there). The white dial is matched with blue accents adding a sophisticated look and feel for the already impressive steel watch. On the contrary of complications, time reading is extremely easy. The time is presented on the right side of the dial while the two small seconds (highlighting the tech of the watch) is displayed at the skeletonized sub-dial at 11 and 7 o’clock. 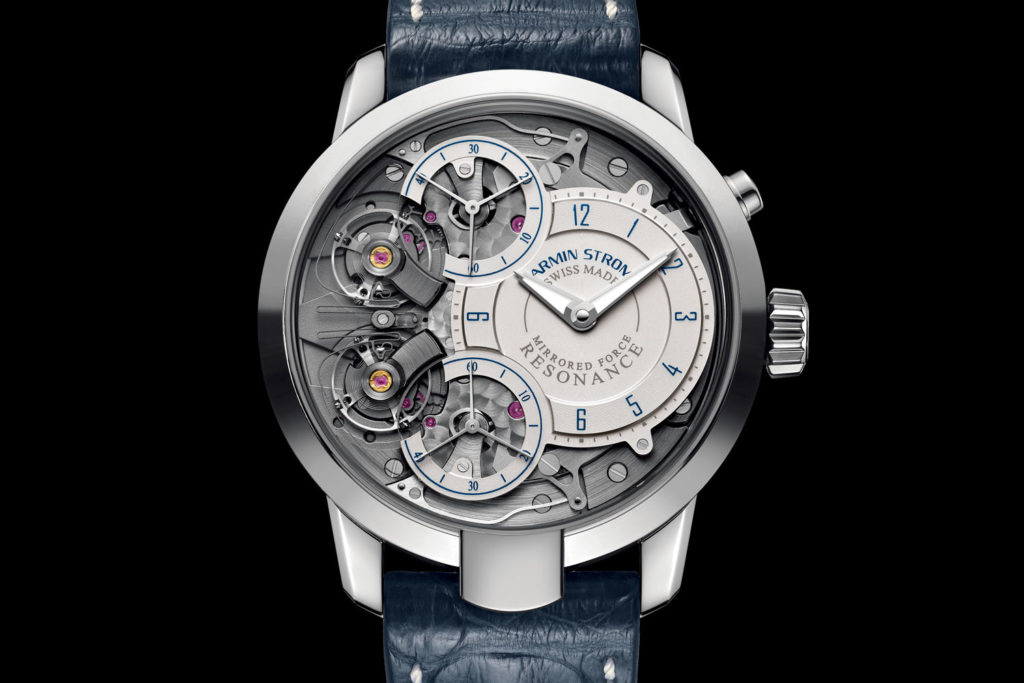 The Armin Strom Mirrored Force Resonance looks sportier and beefier now in the steel version. The blue horn-back alligator strap on pin buckle also adds distinction but we like to think of it as adding more muscle. The sapphire crystal on the front and back with antireflective coating also adds both eye candy and function. Moreover the 50m water resistant AFR15 packs 48 hours of power reserve. Note that the holy grail here are the two independent resonant regulators which yield high energy efficiency and of course top precision. As of this writing, the watch retails at CHF 54,000. For more info, please visit arminstrom.com