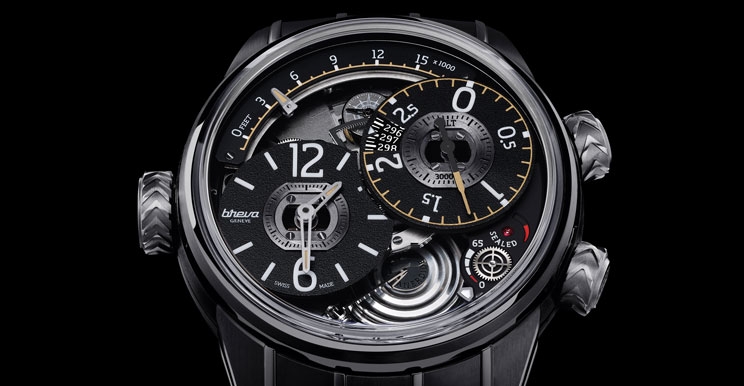 The Breva Génie 02 Air combines the stunning sophistication of a beautifully crafted mechanical timepiece with the practicality of a fully functional, high-performance altimeter. Whether your passion is paragliding, flying, skydiving, hang gliding, mountain climbing, skiing, or simply enjoying the fresh air and stunning views that high altitudes offer, the Génie 02 Air is the perfect companion.

The black titanium case of the Génie 02 Air offers a subtle but stunning backdrop to the high-legibility hands and markers, ensuring that essential information, i.e. time and altitude, is easily visible at a glance.

The superbly finished proprietary movement, much of which can be fully appreciated through the open dial and display back, was developed exclusively for Breva by award-winning movement constructor Jean-François Mojon (Chronode). The Génie 02 Air is 100% Swiss-made, from inception to realization.

The dial side of the timepiece is dominated by a sub-dial at 8 o’clock displaying hours and minutes, and the precision altimeter sub-dial at 2 o’clock displaying meters (or feet). Arcing around the top of the dial is the large-scale altitude indicator, which displays up to 5,000 meters (or 16,400 feet), with small seconds below. At 4 o’clock, an indicator is revealed when the air valve is open or closed (it must be open to indicate the altitude). Below is the 65-hour power reserve indicator.

In pride of place at the bottom of the dial is one of two aneroid capsules measuring air pressure (from which the altitude is derived), with a high-precision arm multiplying by 200 the expansion and contraction of the capsules and relaying the air pressure to the two altitude indications.

Three chevron-engraved crowns wind, set, adjust, and operate the functions of the Génie 02:

The Génie 02 Air is a limited edition of 55−pieces in titanium G5 and is available with calibrations in either meters or feet.

An air pressure altimeter is in fact a barometer developed specifically to display altitude rather than barometric pressure. Pressure in the earth’s atmosphere is a result of the weight of the air pulled down by gravity. The higher the altitude, the less atmosphere above, so less pressure is exerted.

Aneroid capsules: the aneroid capsules in the Génie 02 were especially developed to Breva’s specifications to optimize their precision and use in a wristwatch. The capsules are made from a special non-magnetic memory metal (a Breva-patented invention), which is lighter and stronger than aluminum and has twice the ductility of steel. The capsules are exposed for long durations to high temperature and pure oxygen to maximize thermal conductivity and oxidation resistance.

The Génie 02’s aneroid capsules were developed specifically for registering air pressure for altitude readings rather than barometric pressure, and are different from those used on the Génie 01.

A lever, clearly visible on top of the aneroid capsules, transmits the combined height of the capsules through a complex system of gears and racks to the two precision, large-scale altimeter indications. The gearing for these two displays has been carefully calculated to optimize both precision and legibility.

Adjusting for changes in air pressure: atmospheric pressure can change with weather, and this can affect altitude readings. When bad weather approaches, air pressure can fall, causing the altimeter in the timepiece to confuse this decrease in pressure with an increase in altitude.

In order to compensate for weather- or temperature-induced barometric pressure variations, the altimeter should be calibrated by using a known altitude or a known pressure value. A known altitude can typically be taken from a specific landmark on a topographic map. If a known altitude is not available, a known pressure value will suffice. Barometric pressure is measured several times per day and can usually be obtained from aviation weather reports.
Altitude has historically been measured using a calibrated barometer, which is essentially what a pressure altimeter is. A barometric altimeter measures air pressure, which decreases with increasing altitude due to less atmospheric pressure.

A pilot must recalibrate the altimeter according to local air pressure at sea level, in order to take into account natural variations of pressure over time due to weather and temperature. If altimeters are not calibrated before flight, two aircraft could be flying at the same altitude even though their altimeters indicate that they are at different altitudes.

To ensure aeronautic safety, planes and air traffic controllers use flight levels, which is a nominal pressure altitude in feet divided by 100 and always divisible by 500 (so always ending in 0 or 5), rather than actual height above sea level. For example, 33,000 feet is referred to as « flight level 330”.

Actual altitudes above ground are not as important for flight safety as the difference in altitudes between planes. This difference can be determined from the air pressure at each craft, and does not require knowledge of the local air pressure on the ground.