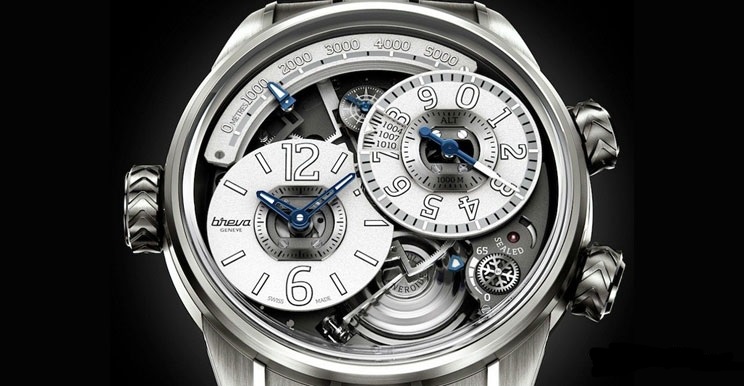 The Breva Génie 02 Terre combines the stunning sophistication of a beautifully crafted mechanical timepiece with the practicality of a fully functional, high-performance mechanical altimeter. Whether your passion is trekking, skiing, snowboarding, mountain biking or just relaxing while enjoying the fresh air and stunning views, Génie 02 Terre helps keep you on time and on track.

Génie 02 Terre is 100% Swiss-made, from inception to realization. The superbly finished proprietary movement, much of which can be fully appreciated through the open dial and display back, was developed exclusively for Breva by award-winning movement constructor Jean-François Mojon (Chronode).

The dial side is dominated by a sub-dial at 8 o’clock displaying hours and minutes, and the precision altimeter sub-dial at 2 o’clock displaying meters (or feet). Arcing around the top of the dial is the large-scale altitude indicator, which displays up to 5,000 meters (or 16,400 feet), with small seconds below. At 4 o’clock, an indicator shows when the air valve is open or closed (it must be open to indicate the altitude), below which is the 65-hour power reserve indicator.

In pride of place at the bottom of the dial, the top of one of the two aneroid capsules measuring air pressure (from which the altitude is derived) is visible, with a high-precision arm multiplying by 200 times the expansion and contraction of the capsules and relaying the air pressure to the two altitude indications. 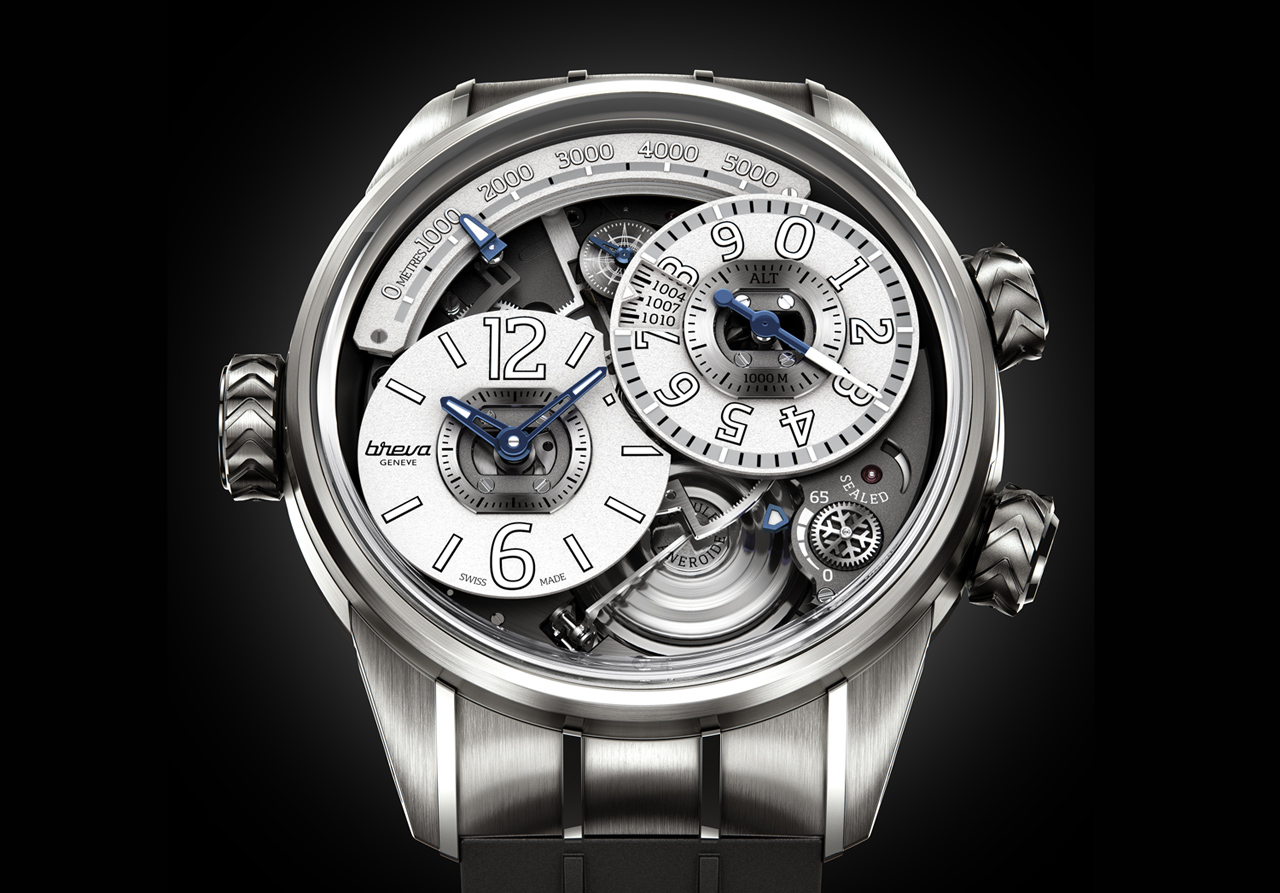 Turning the Génie 02 over, the complexity of beautifully finished 415-component movement can be more fully appreciated. The movement is framed by the names of prestigious ski resorts − Aspen, Vail, Las Lenas, Gstaad, St Moritz, Zermatt, Courchevel, Cortina, Kitzbuhel, and Lech − along with their altitudes, engraved around the perimeter of the caseback. When winding the movement you can see the rotation of the cap of the mainspring barrel. 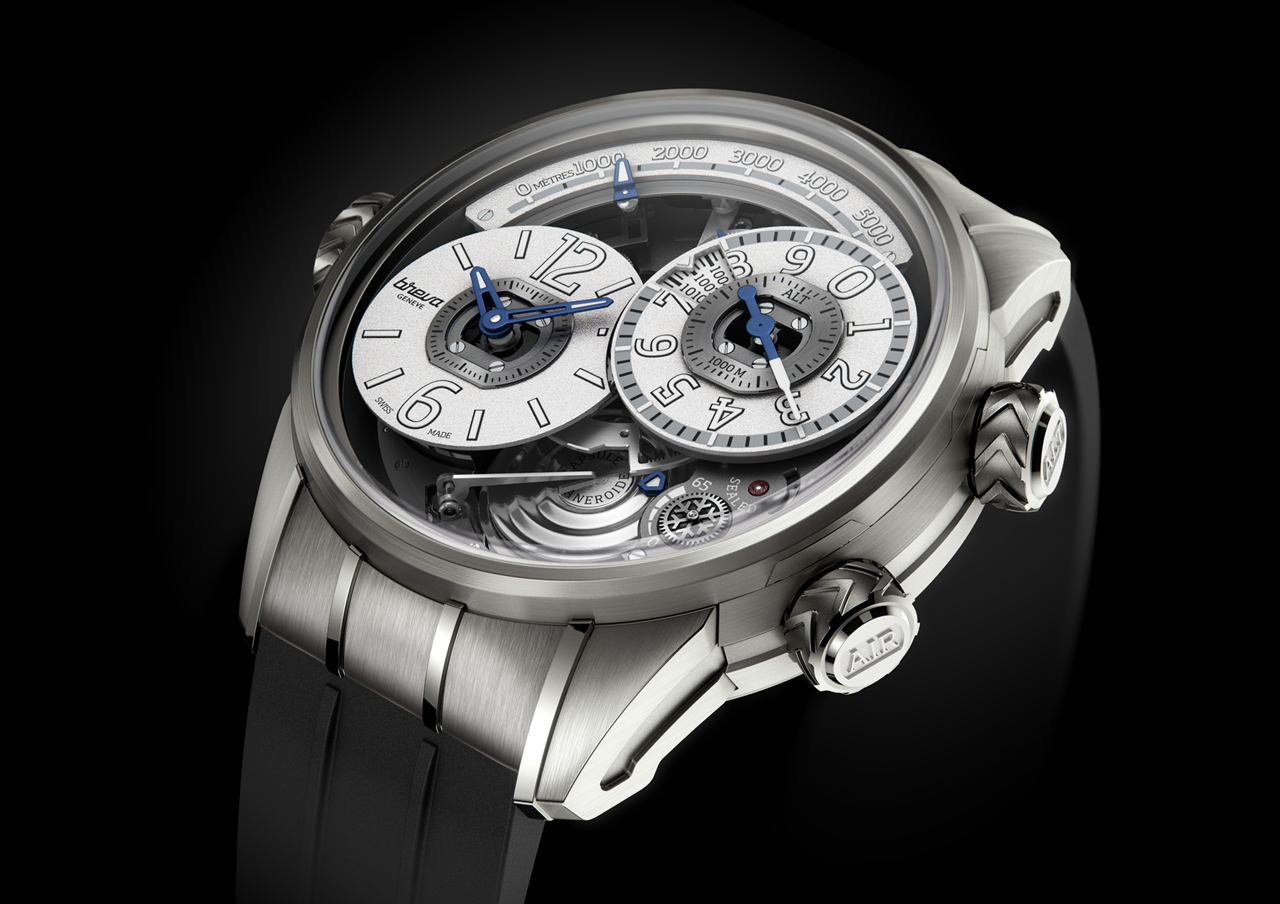 The name ‘Breva’ is inspired by ‘La Breva’, a warm southern wind that contributes to the agreeably mild microclimate around Lake Como in northern Italy. Like its namesake, Breva blows a refreshing breeze through the often-stuffy world of Swiss haute horlogerie by creating timepieces that monitor your environment.

Génie 02 is a limited edition of 55 pieces in titanium G5 and is available with either meter or feet calibrations.

An air pressure altimeter is in fact a barometer developed specifically to display altitude rather than barometric pressure. Pressure in the earth’s atmosphere is a result of the weight of the air pulled down by gravity. The higher the altitude, the less atmosphere above so less pressure exerted.

Aneroid capsules: The aneroid capsules in the Génie 02 were especially developed to Breva’s specifications to optimize their precision and use in a wristwatch. The capsules are made from a special non-magnetic memory-metal (Breva patented invention), which is lighter and stronger than aluminum and has twice the ductility of steel. The capsules are exposed for long durations to high temperature and pure oxygen to maximize thermal conductivity and oxidation resistance.

Génie 02′s aneroid capsules were developed specifically for registering air pressure for altitude readings rather than barometric pressure, and are different to those used on the Génie 01.

A lever, clearly visible on top of the aneroid capsules, transmits the combined height of the capsules through a complex system of gears and racks to the two − precision and large-scale − altimeter indications. The gearing for these two displays has been carefully calculated to optimize both precision and legibility.

Adjusting for changes in air pressure: Atmospheric pressure can change with the weather and this can affect altitude readings. When bad weather approaches, air pressure can fall causing the altimeter to confuse this decrease in pressure with an increase in altitude.

Using the altitude to navigate in the mountains: An altimeter used in conjunction with a topographic map can help verify location and aid navigation. A barometric altimeter as found in the Génie 02 is often more reliable and more accurate than a GPS receiver for measuring altitude. GPS altimeters may have difficulty in finding a signal, e.g. in a deep canyon or beside a steep cliff, and may give inaccurate measurements if available satellites are near the horizon.

Mountains are good for you: Studies by the University of Innsbruck in Austria, which is ranked 3rd worldwide for mountain research, showed that people who holiday or spend time at moderate altitudes had lower blood pressure and pulse rates, lost weight and slept better. So as well as the pleasure of pure mountain air and breathtaking scenery, spending time in the mountains is great for your health as well.

Negative ions are invisible, odorless, tasteless molecules that we inhale in abundance in environments like mountains, waterfalls, and beaches. Once in our bloodstream, negative ions are believed to produce biochemical reactions that increase levels of serotonin (the mood chemical), helping to alleviate depression, relieve stress, and boost daytime energy levels. So strap on your Génie 02 and get out there!