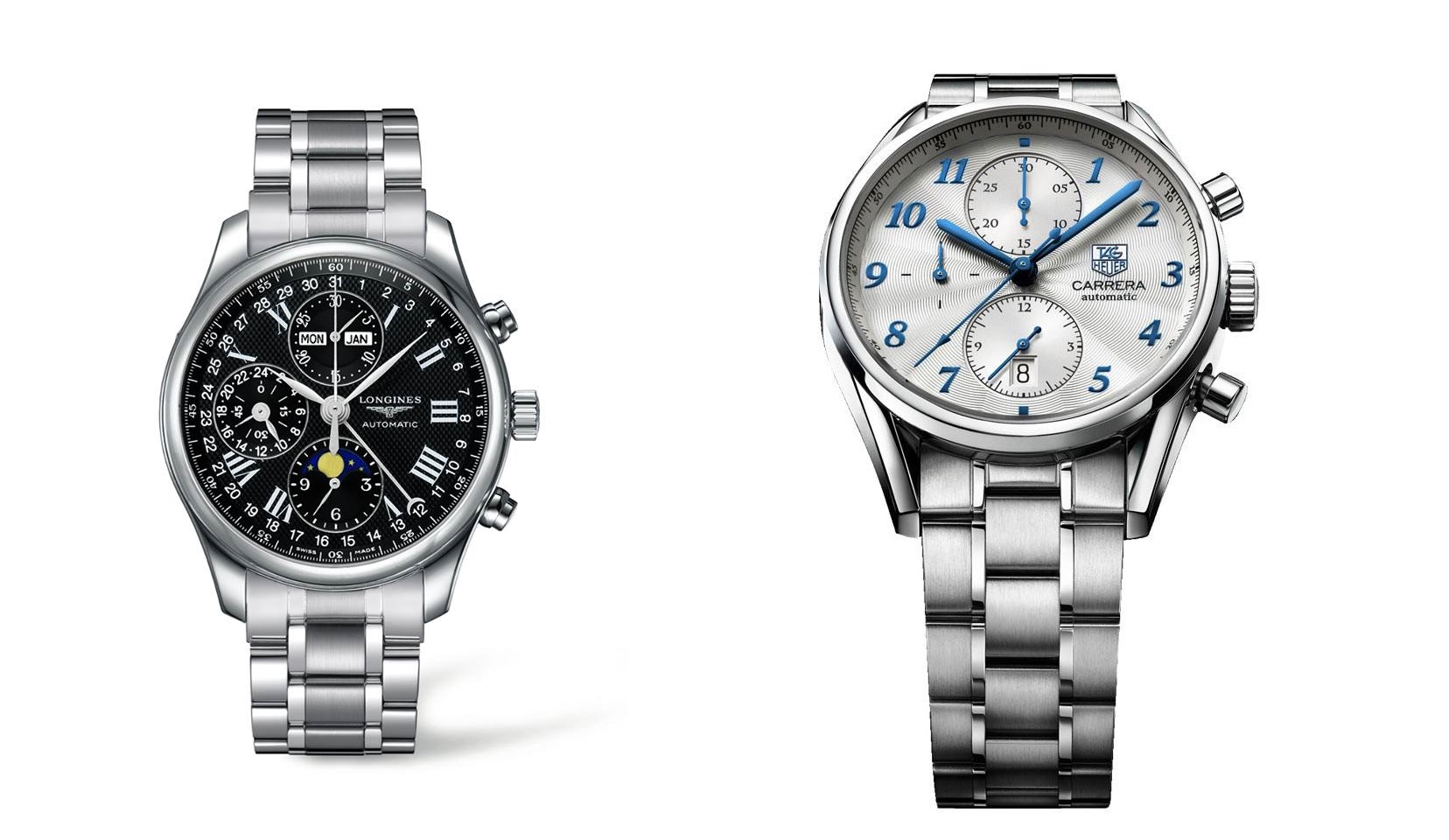 Clash of the Chronos returns for a third time with a battle of the lesser priced chronograph watches. As with the previous instalments, I’ll look in detail at two watches before bringing them together towards the end of the article before reaching a final verdict. This time, it’s a £3500 Tag Heuer vs a Longines which by all means deserves to cost well over £10,000. Let’s have closer look at that first.

Those that are familiar with Longines know that it once had an amazing history. It owned all of the middle sector essentially. If you didn’t have a more mass produced watch (nowhere as mass produced as they are today, mind) and you couldn’t quite afford the likes of Breguet, Blancpain or Vacheron Constantin, you’d buy a Longines. Back in the late 1800s and indeed the early 1900s Rolex was either non existent or still in it’s very very early stages. Longines was all the rage for a long time until the quartz revolution hit it really hard and it was forced to make several cut backs to save itself from going under. Since the first quartz powered Longines timepieces went into stores worldwide, Longines all but lost it’s status and all it has left is it’s rich history. 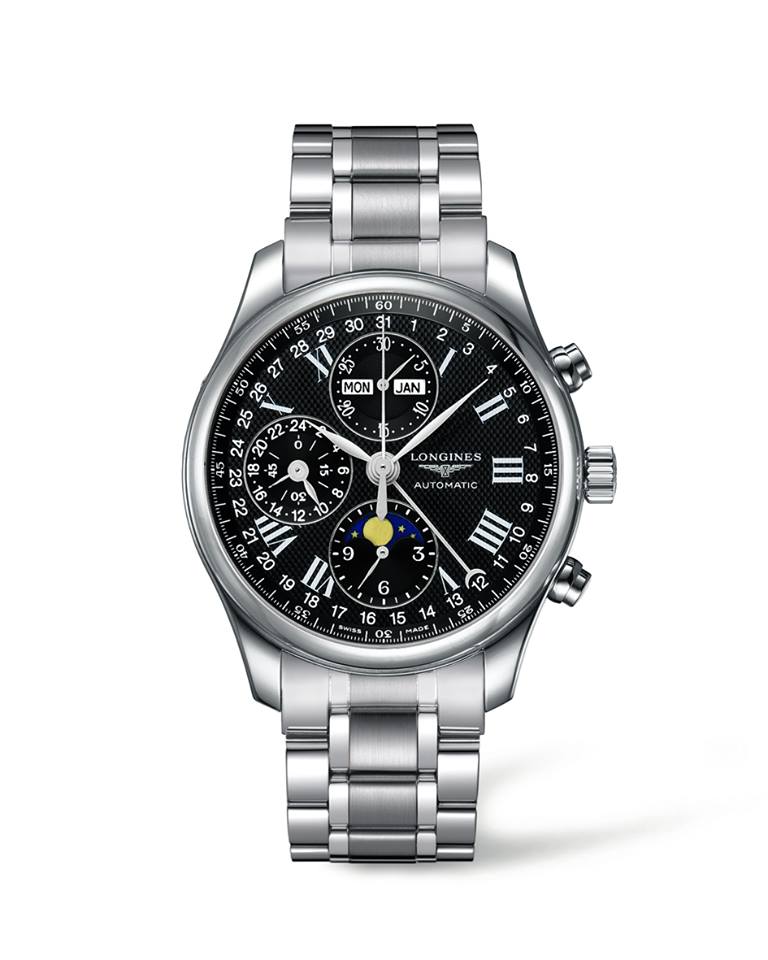 It is making a comeback, however, and leading the charge is the Master L2.773.4.51.6. Indeed, there is a white dial 2 tone option and a version on a strap, but this is the one I prefer most. So what’s this got going for it? Well, let’s start off with the looks. Even those who are used to having their heads in the horological clouds, people such as myself and those who own those watches, would have a really hard time finding the dial unattractive. Of course, there will always be those that don’t like it, but even then they’d have to have a heart made of stone to not find something to like about this watch. 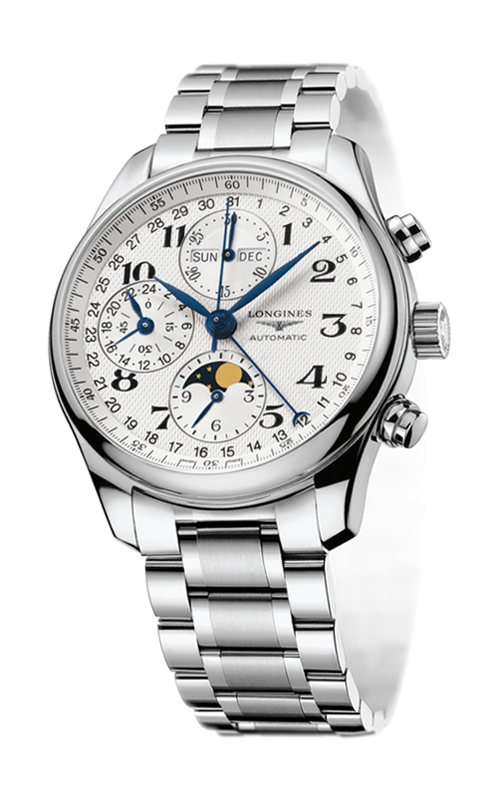 Let’s start with the dial and all those things on it. Starting from 12 O’Clock there’s the 30 minutes counter for the chronograph, inside that is are the day name and month indicators which use a window to display the date, with the day on the left and the month on the right. Going anticlockwise at 9 O’Clock we can see the running sub seconds displayed by the thinner hand and a 24 hour indicator encompassing that. Because this is a 12 hour chronograph there needs to be an hour indicator, and indeed that’s present on the dial in the 6 O’Clock position. Revealed at the same time as this is the moonphase indicator, which takes up the top half of the sub dial. Then at the 3 O’Clock position is the Longines logo and the word ‘Automatic’ written under it. But wait, there’s more. There’s a fourth hand coming from the centre of the dial. There’s the chronograph seconds hand, the minute and hour hands and then there’s the rotary date indicator with a semicircular end. You read that right, this watch is now pretty much an annual calendar moonphase chronograph GMT. Not only a mouthful, but also a mega deal of the century type thing as a Patek or Lange with all these complications would easily cost over £30,000 even if they were made in steel.

As with all supposed ‘Deals of the century’, there is a catch. First, Longines is nowhere near the big three watch makers (AP, VC & PP) and this clearly shows as, well, it’s a Longines and the very un-decorated rotor is a giveaway. It goes further too, I’m afraid. The movement, like in all Longines pieces, is based on an off the shelf ETA, visible through the back. This has the advantage of being more cost effective to produce the movement somewhere else and modify it, but it lacks that speciality you get from an in house movement as you know that many other watches use it too. Also, the bezel doesn’t have a tachometric scale on it, so it’s use is limited further. However, the appearance of this watch makes me think that Longines was going for the more elegant sporty watch, a category also home to the likes of the Jaeger LeCoultre Reverso, Rolex DateJust and Cartier Santos. Most of these other watches don’t have half the complications the Longines does, I’ll leave it up to you to decide whether that’s a good thing or not.