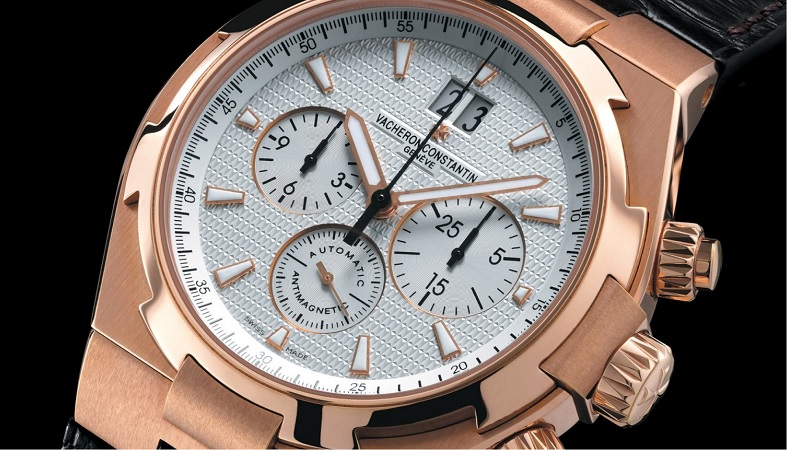 In this article I’ll be looking at the combinations of metal and complications that I really like, there may be some small suggestions by me to Vacheron Constantin for some new ideas too. I’m not going to look at one specific watch in the range as Jovan Krstevski has already done a marvellous job with the chronograph version of the Overseas, you can read that article here.

The Overseas didn’t have input from Gérald Genta like it’s partners in suave crime the Patek Philippe Nautilus and Audemars Piguet Royal Oak. Instead, it was introduced (much later than the aforementioned two were, I might add) to add a touch of sport to the Vacheron Constantin lineup. Vacheron Constantin is the oldest continuously operating watch manufacturer in the world and goes all the way back to 1755, however, to prove to a newer, younger generation of people who make money from the newly established internet that Vacheron wasn’t an ageing name that should be put to rest they had to make a captivating bracelet based watch. And oh boy did they.

The Overseas collection looks like it’s retro when placed next to it’s two main rivals which happen to be the Patek Philippe Nautilus and the Audemars Piguet Royal Oak. Both of which are oddly shaped when you think that nowadays the market leans towards circular watches with the exception of the Jaeger LeCoultre Reverso and some Cartier ranges. The bracelet on the watch is made up of half of Vacheron’s logo, the Maltese Cross, and is very elegant, especially in solid gold. Don’t think that Vacheron designers sit around all day and produce run of the mill watches, however.

As well as the simple and elegant no complications models, Vacheron Constantin also loads these up with plenty of ammunition to talk about. There’s a chronograph date version, for example, and if you like the Royal Oak duo time zone but you’re not keen on the octangular case then Vacheron also make a duo time zone Overseas. It’s very elegant, traditional looking and it’s certainly a Vacheron Constantin. The dial of the watch is taken up by three main parts, there’s an up/down power reserve indicator on the upper left hand side, below that at 6 O’Clock is the second time zone’s hour hand with a day/night indicator next to it. There’s no minute hand, it’s not really necessary to be honest for two reasons. The first is that you can get a pretty good idea of the minutes by looking at where the hour hand is pointing between the markers, but the main reason is that the minutes are the same across the globe with only tiny differences, it’s the hours that are different. There’s also a rotary date in the top right, helping to add some sparkle to this watch.

All Overseas models have a crisp, hand engraved dial with distinct rhombus shapes on it. Also, around the edge of the crystal is an edge with what look like clamps holding it down, it takes inspiration from the remarkably similar 222 model which is the Overseas’ retro ancestor. This is one of the few sections on an Overseas that’s polished to perfection, with the other being the crown, extra crown in the case of the duo time zone and the pushers on the chronograph version. The rest of the metal case is brushed which I think really makes it subtle and less noticeable after a period of wear as the scratches are hidden.

If you don’t want a bracelet, then Vacheron also gives some Overseas models a leather strap. The bonus of the leather strap is that there’s n exclusive solid gold perpetual calendar chronograph option. But you lose the sporting ability as the leather will wear badly after a while. Not that a gold case is particularly useful to sports watches anyway. What is useful is that all Overseas models are water resistant to 150 meters and are automatic so there’s no finicky little crown to play around with. Slap it on and go out on the Italian Riviera, it’s probably what Vacheron imagines you doing, anyway.

I feel a skeletonised Overseas is what’s in order. Just a simple hour, minute, second and possibly a  date ordeal that really sings Vacheron’s expertise in decorated watches. Maybe on a rubber strap with the same pattern on the dial applied to it. It’s a thought. Personally I wouldn’t add an all black version to the lineup though, for the range I think it just wouldn’t work. Vacheron blends in, it’s a good thing too.

Which one would I choose then? I’d really love the solid gold on a bracelet with the twin time zones. For me, it looks great and sets a nice tone that can be followed on with another purchase from Vacheron, say, a Patrimony in platinum. The sleek curves and beautiful precious metals are what help to make this watch fly under, over and straight into the radar at the same time (I have no idea where I’m going with this). I think it’d also go well with a Patek Philippe Nautilus and an Audemars Piguet Royal Oak. All three on bracelets, all three shining beacons in the sports watch industry. For more info, please visit vacheron-constantin.com