A Fortnight Review: 2 Weeks On The Wrist With The Omega Seamaster Aqua Terra 150m 41.5mm Watch 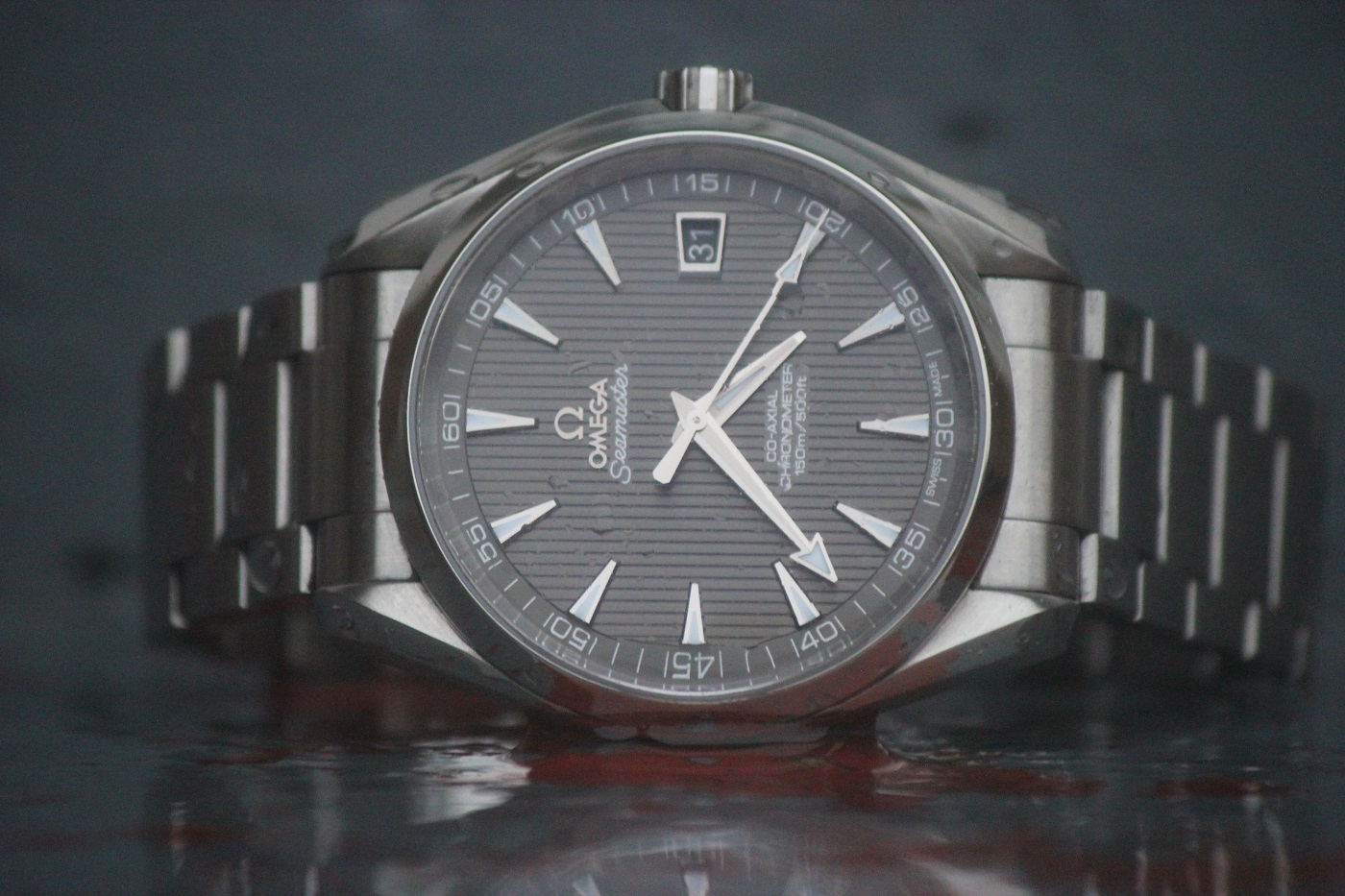 Well hello there! It’s great to see you again, do come in and sit down, cup of tea? Speaking seriously for a moment, it is great to be back with another fully fledged watch experience. If you’re an avid follower of the site and we hope you are you’ll know that high-end luxury watches are not only fantastic examples of manufacturing skill, but also rare gems in our ever complex lives, so you can understand why I jumped at the chance to get not just a hands-on, but a full on wrist experience with this often overlooked watch.

I’d like to start by talking about class. Lots of people in watch enthusiast groups use it when describing their watch, but what is class? Something that is classy can be defined as showing stylish excellence, and it’s, for this reason, that class is completely subjective, we all have our own ideas about what we like to see on a watch, some features can look great to some viewers but to others, they can look a complete mess. If we all had to vote on some watch models that definitely show class and elegance then there would be a few watch models that we were all secretly expecting to see, the likes of the Rolex DateJust, Patek Philippe Calatrava and the Jaeger-LeCoultre Reverso to name but a few. However I wouldn’t be at all surprised if the Seamster Aqua Terra showed up as well, it’s a seriously handsome watch. 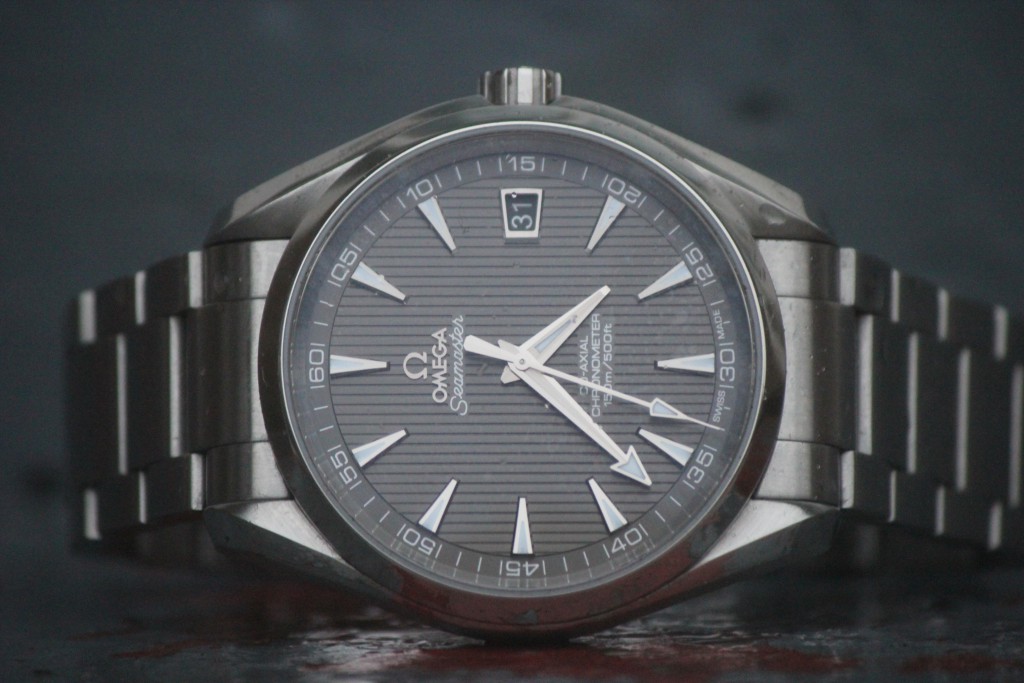 Several key factors are involved in this when it comes to the design. The first and foremost being the dials, the Aqua Terra watches Omega produce all have an effect on their dials known as ‘Teak Concept’, Teak being the wood used for luxury yachts among other ocean related structures. Like the DateJust, the Aqua Terra is designed to be somewhat sporty, but at the same time very comfortable by the side of the pool or beach relaxing after a day’s water sports when you’re tired and more likely to be dressed in shorts and a shirt rather than don a tuxedo. Having said this, the watch can be worn very easily with formal attire and blends in to give onlookers the impression that you can do pretty much anything, to be honest, I felt like I could do almost anything with this watch on! 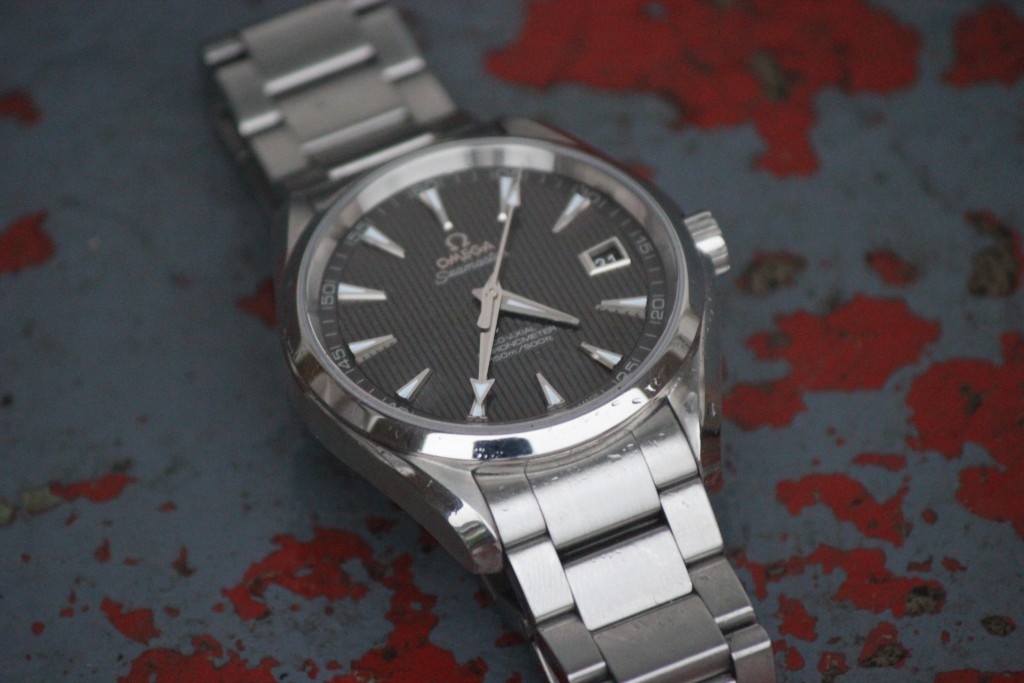 It’s that real boardroom to beach party look that makes casual sports watches such as the Aqua Terra a real pleasure to be around, helping the dial to make this point are the hands, the indices and the date window. Sophistication is one of the key points to the Aqua Terra and the design of the markers really helps, they’re simple, white metal triangular indices that go with the hour hand which adopts a similar but more elongated design, keeping that dial seducing and subtle. To bring a sports air to the piece the hour hand uses Omega’s long lasting ‘Broad Arrow’ design making telling the time very easy at a glance. This coupling of activity and relaxed design themes would be no use if the gentleman couldn’t tell the time in the dark, though, and luckily Omega thought of this too by applying blue SuperLumiNova to every hand including the seconds hand, it’s not as bright or as sharp as you’d find on a Diver 300m or a Planet Ocean, for example, but it doesn’t need be seeing as the watch won’t survive the depths that the big diving boys do, but don’t think that means the designers were complacent. 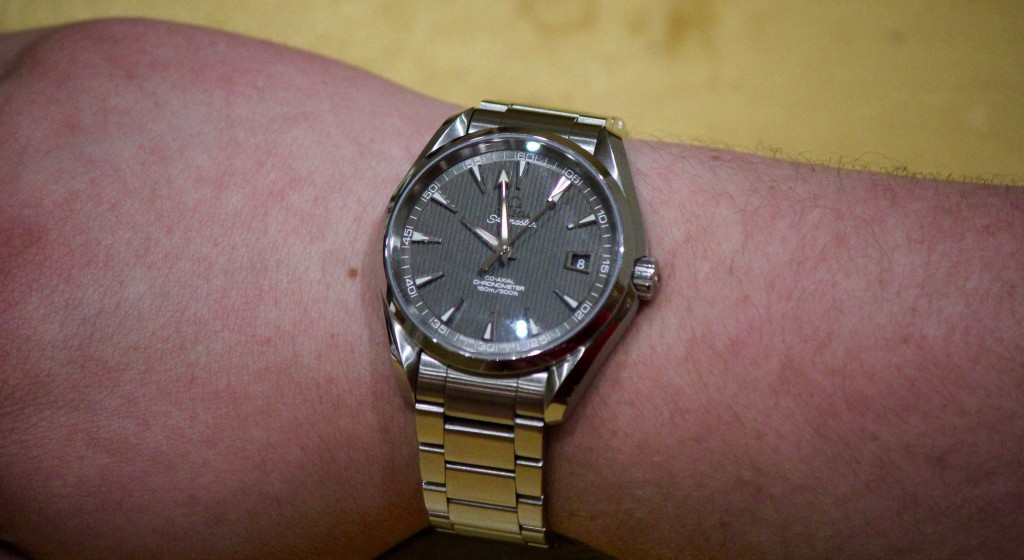 The case and bracelet are phenomenal, the reasons why newcomers to the industry with little previous knowledge start with an Omega timepiece, these days the parts that come into contact with your skin feel like few other watches. It’s been noticed by Omega fans and collectors alike that in recent years they’ve been putting more and more thought into the way the bracelets are made and fitted to the watch. This has had effects on many big players in the watch industry, for example, Rolex realised that they needed to scrap the cases which featured bracelet holes and go for a sleeker design, as well as step up the work, put into their clasps as the stamped offerings simply weren’t enough. 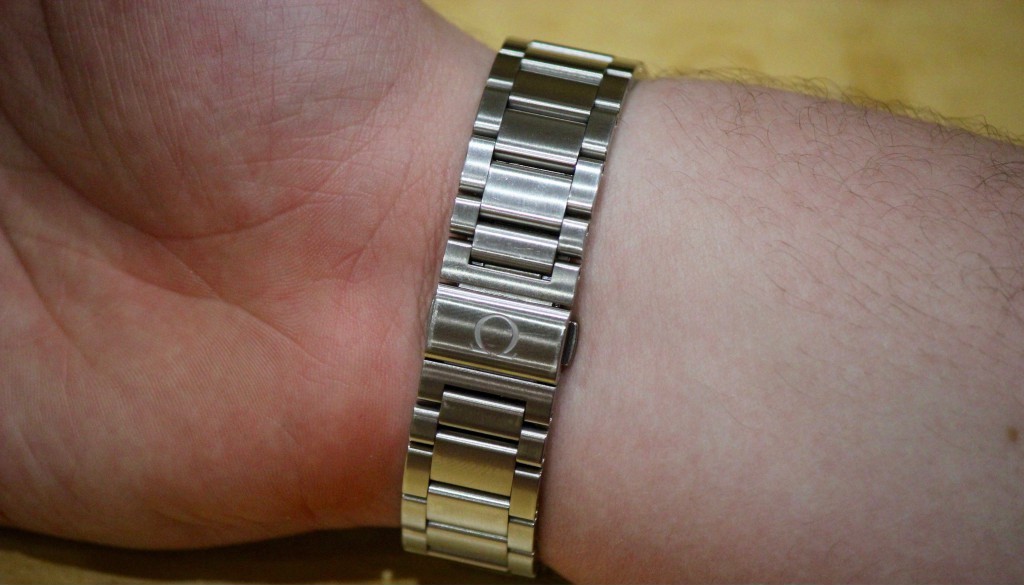 These developments all came around because Omega really went to town on their bracelets, and it’s the same story here as well. The links most likely to be removed for size adjustments are all joined with flat headed and polished screws rather than traditional pins, this not only makes the bracelet more secure when it’s been worn for years, but it also looks cleaner and is easier to adjust as needed. Also, the butterfly clasp used feels very sturdy with solid steel components and a very satisfying click. The butterfly clasp is a superior design to the normal swing arm fold over clasp in a couple of ways, first is the fact that it’s unlikely to pinch the skin or hairs on the wrist as it doesn’t need to make one big arc to seal closed, but instead two smaller ones supported in the middle. The other advantage is purely aesthetic, a butterfly clasp as seen here allows the bracelet to become one single seamless band around the around the arm of the wearer, looking much more slick and cool than those that you’d find on a full on diving watch for example. 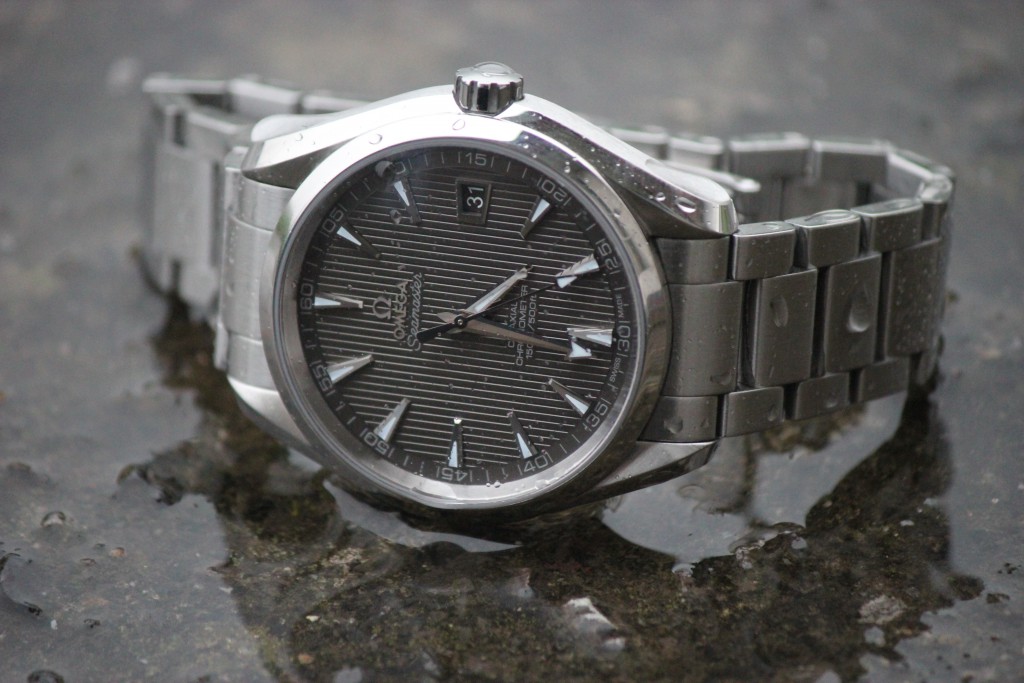 Omega wouldn’t be where it is today if it only considered looks and not much else, an ethos which seems to have caused some companies a lot of trouble indeed, European automotive manufactures the most. Luckily Omega were right on the ball with this movement. Because this is a 2014 model the watch uses an in-house made automatic Calibre 8500 movement, the difference between this and the current generation of Omega movements used in the Aqua Terra is that they are Master Co-Axial movements and this isn’t, luckily this has pretty much no effect on the aesthetics of the movement and it’ll take a few years of running in the new movements before the differences can really be seen, so that’s good enough for us! 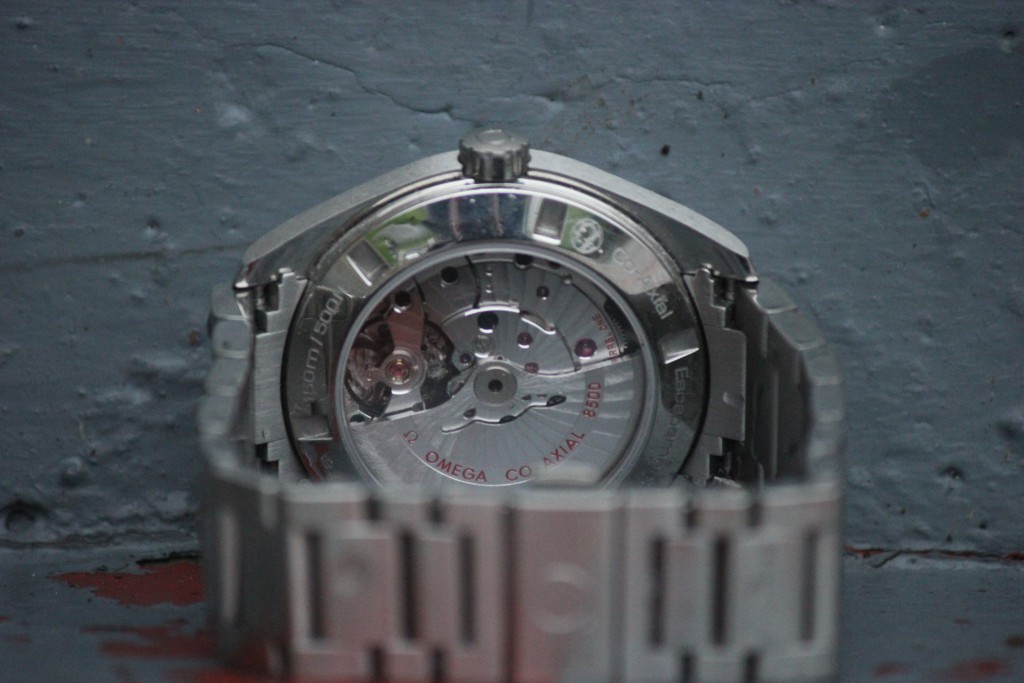 The reverse of the watch features an open caseback to reveal and industrial marvel. It’s no secret that Omega produces over half a million watches per year, but even so all of the movements are impeccably finished. The silvered movement glistens under light thanks to the fact that all parts (except the balance wheel and the barrels) are finished with arabesque Geneva Waves, making the shimmer that little bit extra special. The movement itself has two barrels in it, rather than one, a technique not so often seen in the watch industry especially at this level of production. “What do the twin barrels do?” I hear you ask, put simply the barrels store the energy used by the movement to run the balance wheel and keep the watch ticking, they do the same job as the weights in a grandfather clock, but in a different way of course. What this does mean is that the watch has a very impressive 60 hour power reserve, good for leaving the piece at home for the weekend, also the fact that the balance wheel is suspended from a bridge rather than a cock means that the watch is much more resistant to shock, helped along by the silicone balance wheel which can flex upon impact and return to normal afterwards. 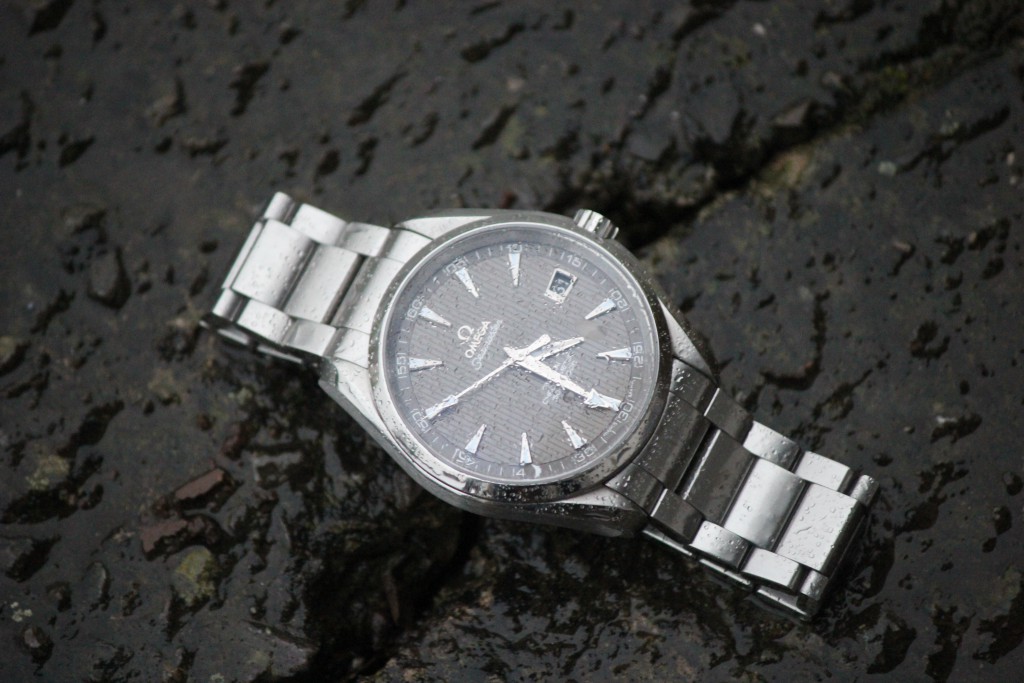 Let’s talk practical here for a minute, it’s all well and good pointing out the unique selling points of this watch (of which there are many), but we need to look at pricing. If you want to pick up the current version of this bad boy from Omega in the UK you can expect to pay £3800 including VAT, which when considering what this watch is, a long-lasting go anywhere luxury timepiece from a very reputable company, it’s not that much. Add in 150m of water resistance and 4 years of cover from the manufacturer and you’ve got yourself a great piece that won’t depreciate like a stone either. 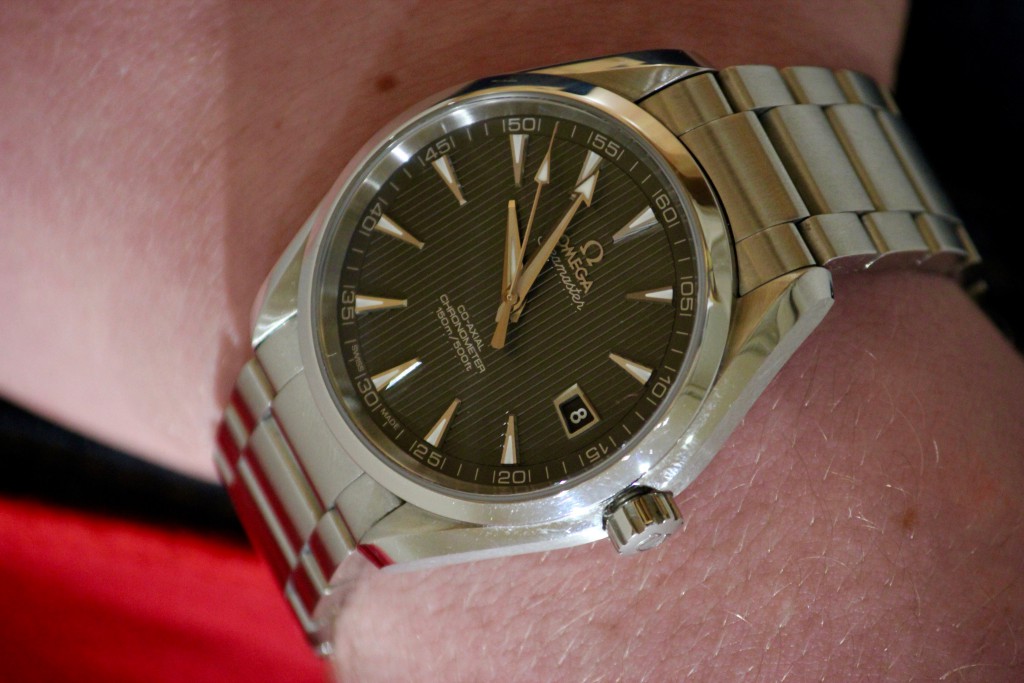 I’ve really enjoyed my time with this watch, it gets many compliments even from those who aren’t so much in the know when it comes to timepieces. A simple, elegant winner that doesn’t shove all it’s innovations in your face. A no compromise daily wear, good at both smart and casual functions as well as keeping the kids entertained with the spinning rotor that is undoubtedly cool, maybe it’s the perfect all-rounder?

A keen bass guitar player, Harlan enjoys all the perks modern watchmaking technologies the industry has to offer. Although you might catch him sampling Omegas or the “odd” Rolex, Harlan loves all things Haute Horology, with his three favourite brands being Breguet, A.Lange & Söhne and Vacheron Constantin. He hopes to study timekeeping more in-depth someday and will never be able to thank his father enough for introducing him to the industry. You can follow him on Instagram Read his articles here