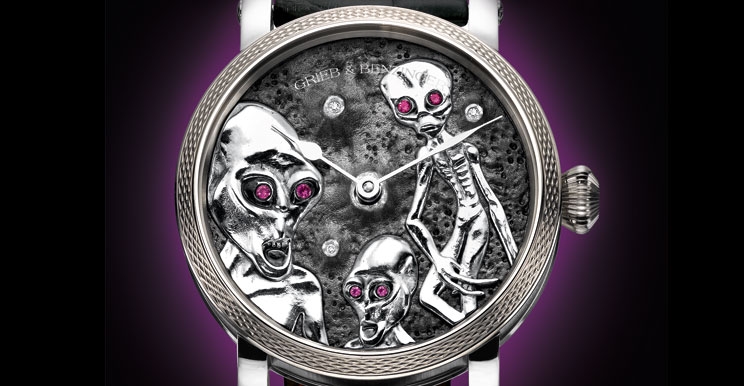 Out of this World

It’s gotten around in the world of watches: GRIEB & BENZINGER fulfills bespoke horological dreams. Like hardly another, the masters of skeletonization at GRIEB & BENZINGER know how to fulfill the wishes of its clients with traditional technology and exceptional design, creating a unique handmade piece with high exclusivity that allows the client to have his or her personal watch dream realized.

Earlier this year, a very unusual request arrived at the workshop from a customer who already owns several GRIEB & BENZINGER timepieces. As his son is a huge fan of aliens and space, his personal wish was to receive an alien-themed watch along the lines of the Area 51 legend realized for him by use of GRIEB & BENZINGER’s famous horological techniques. Using well-known Hollywood movies featuring extraterrestrials as a model, the challenging project was realized using materials that allowed for a metalized liquid appearance.

Thanks to the extreme talent of Albrecht Bolz, master goldsmith in charge of all GRIEB & BENZINGER goldsmith needs, the final result looks unusual and amazing to say the least. Three-dimensional aliens with metalized surfaces and ruby-set eyes against a backdrop of a grey moon-surface dial with craters set with diamonds open a new era of GRIEB & BENZINGER BOUTIQUE customer design.

The back of the watch displays the mechanical movement with in-house modifications like all GRIEB & BENZINGER watches created in traditional craftsmanship using historical machines and tools: skeletonization, guilloché and engraving are all completed by hand to achieve an impressive movement with a great deal of character. This movement is also blackened and continues the extraterrestrial theme: three-dimensional planets – of course prominently including Mother Earth – are set on the bridges providing an impression of the depths of space.

Housed in a solid 18K palladium white gold case and secured using an extra-short strap with red stitching, this Area 51 watch will ensure its future owner, a 12-year-old boy lucky to have a loving father to fulfill his horological dream, has a smile on his face. The price of the watch?… Finite, but the price of the smile is something that money cannot buy.