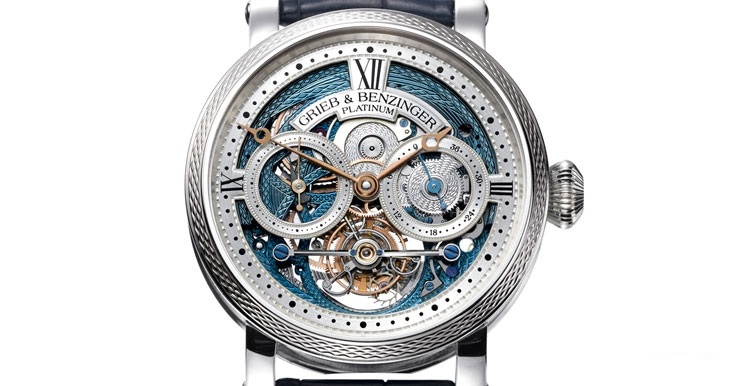 GRIEB & BENZINGER proudly presents its 2014 spring top highlight: the BLUE MERIT, a tourbillon based on the famous, rare, and sought-after Tourbillon Pour le Mérite by A. Lange & Söhne.

Just in time for the 20th anniversary of A. Lange & Söhne`s re-launch in 1994, the masters of GRIEB & BENZINGER surprise watch collectors with a creation displaying deep respect for A. Lange & Söhne`s art of watchmaking. The Tourbillon Pour le Mérite is one of the original representatives of the remarkable comeback of this imperial watch brand, which was resuscitated following almost 50 years of slumber caused by Germany’s historical division. It was a matter dear to the GRIEB & BENZINGER masters` heart to create this amazing masterpiece. 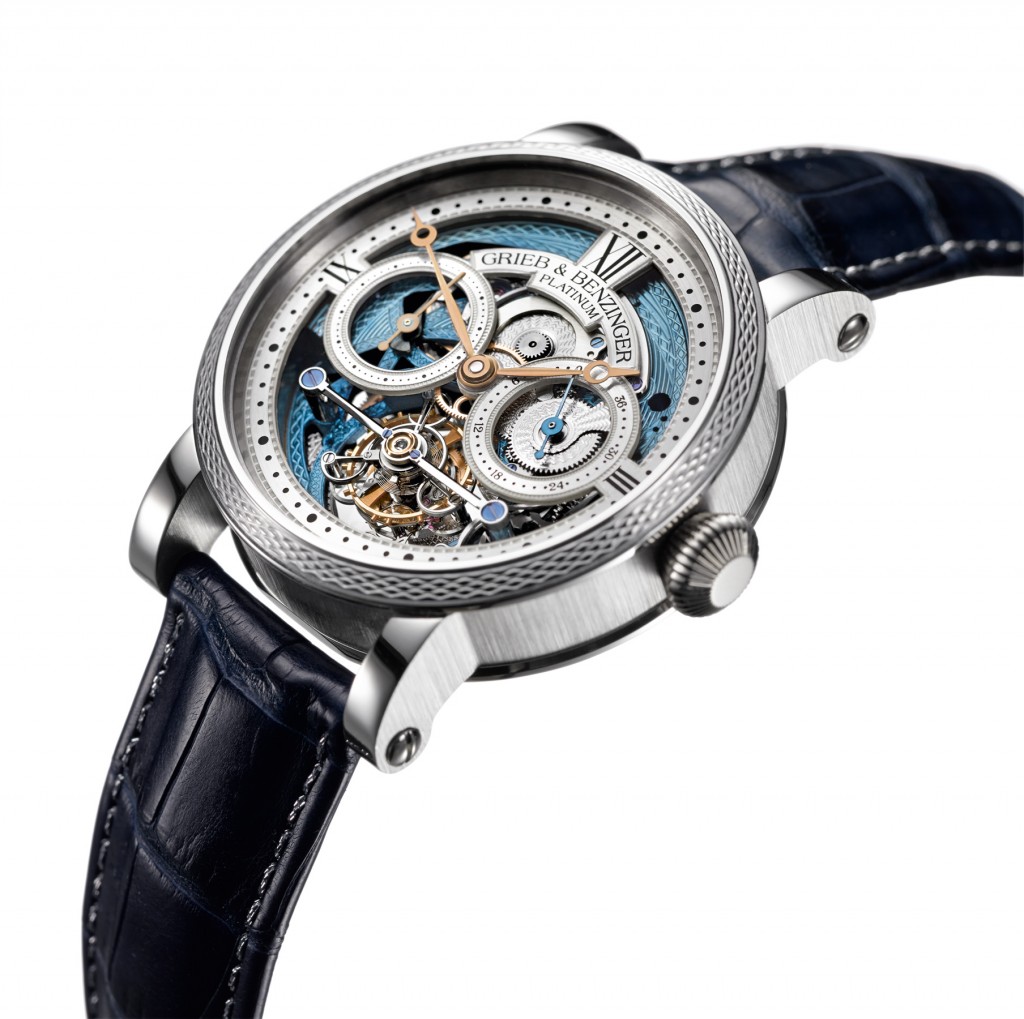 Watch aficionados are aware of the complexity of the tremendously sought-after and highly valuable Pour le Mérite Tourbillon, however, what the masters of skeletonization of GRIEB & BENZINGER did within twelve months was sheer unbelievable: they transformed this timepiece into a breathtaking new watch.

The movement was completely modified to comply with the style characteristic of GRIEB & BENZINGER. This intense horological work took the artisans’ full attention. In hand-skeletonizing and guilloché the base plate, the team at GRIEB & BENZINGER journeyed to the edge of what is possible. Since the fine guilloché on the plates and bridges necessitated moving original drillings by less than one-twentieth of a millimeter, the movement needed to be carefully reassembled, adjusted, disassembled numerous times and finally assembled in order to guarantee full, harmonious functioning of the great number of components and hidden bolts and pins.

And as if that were not enough, one more bridge had to be created due to the skeleton works and the modified layout. Every single cock and bridge was skeletonized by hand, guilloché by hand and coated with rhodium and rose gold. Even the gear wheels were also embellished with fine guilloché. Finally, the base plate was coated with blue platinum, a signature element of every single, unique GRIEB & BENZINGER piece.

The skeletonized Sterling silver dial was embellished with a rare Breguet frosted finish created using the classic method, which is only presently practiced in this manner at GRIEB & BENZINGER. The rose gold-coated steel hands perfectly match the rose-gold tourbillon escapement that has also been modified in color in tribute to the new GRIEB & BENZINGER style. 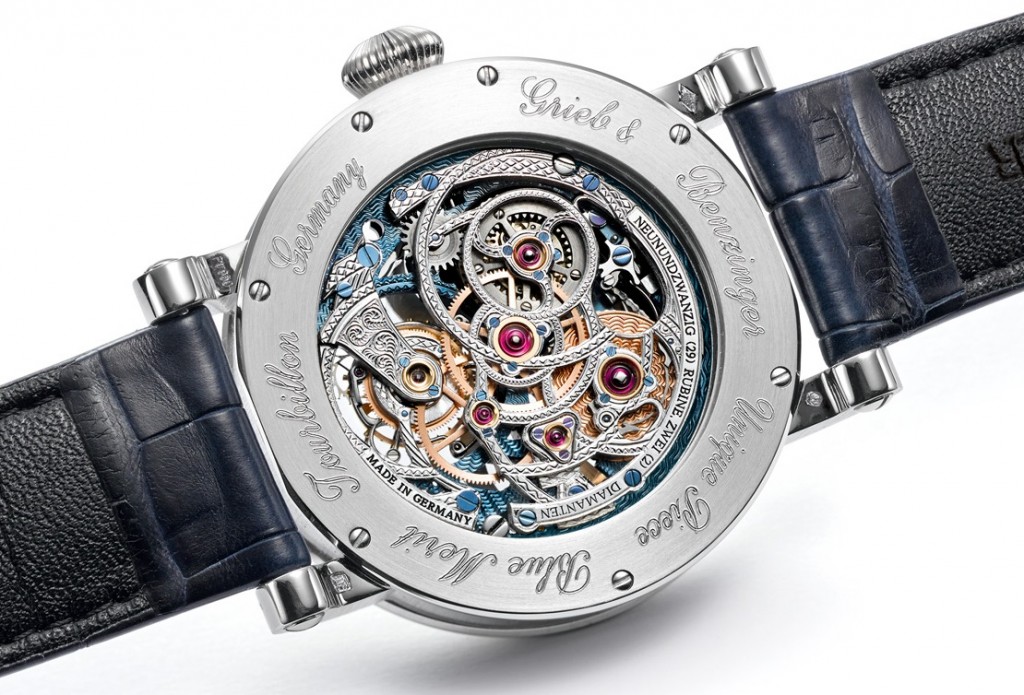 These numerous details once again show that the complicated masterpieces of GRIEB & BENZINGER are more objets d’art than watches. The artisanal crafts carried out by hand here cannot be copied in an industrial way and are thus only to be achieved by the talents of the masters of GRIEB & BENZINGER, who work with these long-forgotten techniques every day.

With the BLUE MERIT tourbillon in solid platinum, GRIEB & BENZINGER has created another breathtaking collector’s item, confirming the brand’s special position within the world of luxury watches. Who other than these masters of their crafts in this special workshop would have the courage to modify such a rare and revered movement? 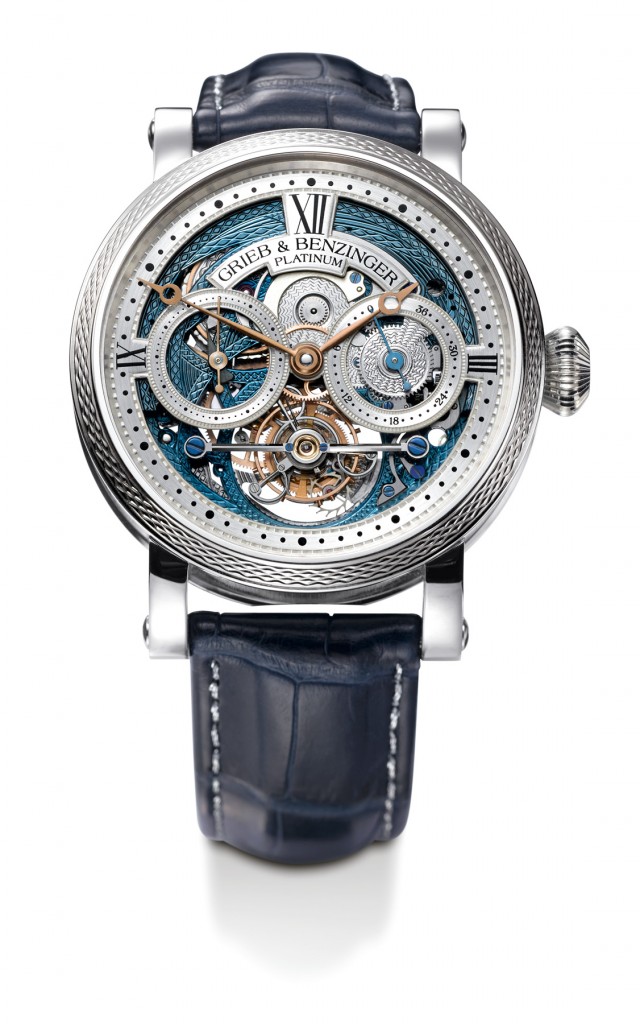 The fact that all GRIEB & BENZINGER Platinum timepieces are one-of-a-kind ensures that their value will increase over time. This ultra-exclusive timepiece by GRIEB & BENZINGER will please exactly one single lucky collector worldwide for the price of US$ 530,000 (385,000 €).