The chronograph made by Officine Panerai in 1943 for the deck officers of the Royal Italian Navy is revived in a Special Edition of only 150 examples. 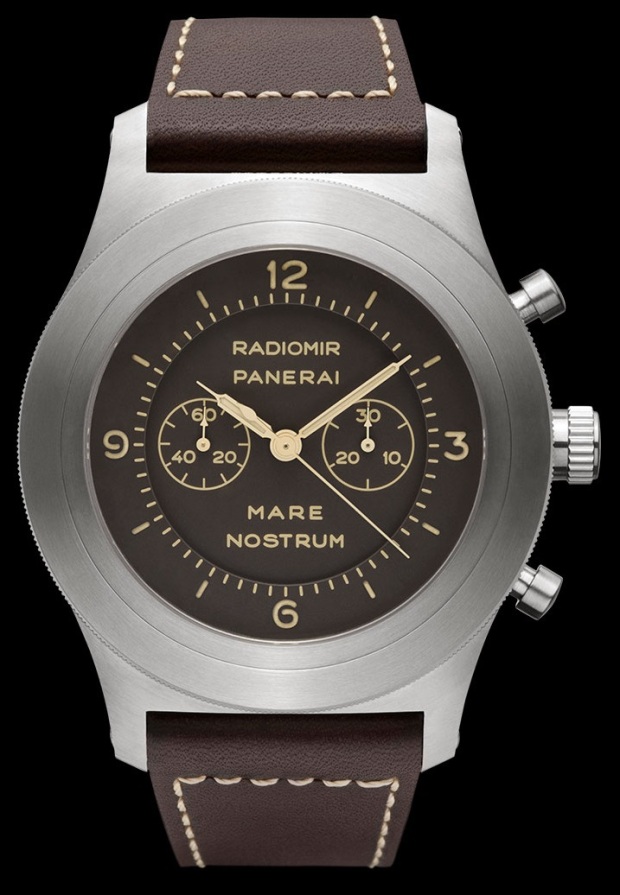 It was during this period that Panerai had in mind the idea to create a timepiece inspired by these acts and in 1943 created the first chronograph for deck officers of the Royal Navy and aptly named it “Mare Nostrum”. However, according to the history books there was a timepiece named “Mare Nostrum” created by Guido Panerai in 1942 that could be considered the first chronograph to house that name. Unfortunately however there are no traces of this model in existence to prove the history books right or wrong. What is wonderful however is that there are still a few prototypes of the 1943 chronograph that still exist, and these have given Panerai the chance to reconstruct with great aesthetic and technical accuracy, the new Mare Nostrum released at SIHH 2015.

The new Mare Nostrum Titanio consists of only 150 examples and faithfully reproduces the 1943 model, updating it to the highest standards of watchmaking. However, there are a few differences from the original that must be noted and observed. The real stand out difference is the material used for the case construction. The 52mm case is constructed out of titanium and is a material that combines both excellent non-allergenic properties and greater lightness than steel giving the timepiece a much stronger case to hold its components in. The wide flat bezel, screw back and winding crown have the words “Mare Nostrum” engraved on them and are all also constructed using titanium.

Also, the new Panerai Mare Nostrum Titanio houses a new hand-wound manufacture movement developed using a Minerva 13-22 base. The new movement named the OP XXV calibre also has all the same refinements and innovations as most modern movements including a high-end column wheel and swan neck regulator; the bridges are made of Maillechort and it also has a Côtes de Genève finish. Limited to just 150 examples and a big hit for us from SIHH 2015. For more info, please visit panerai.com