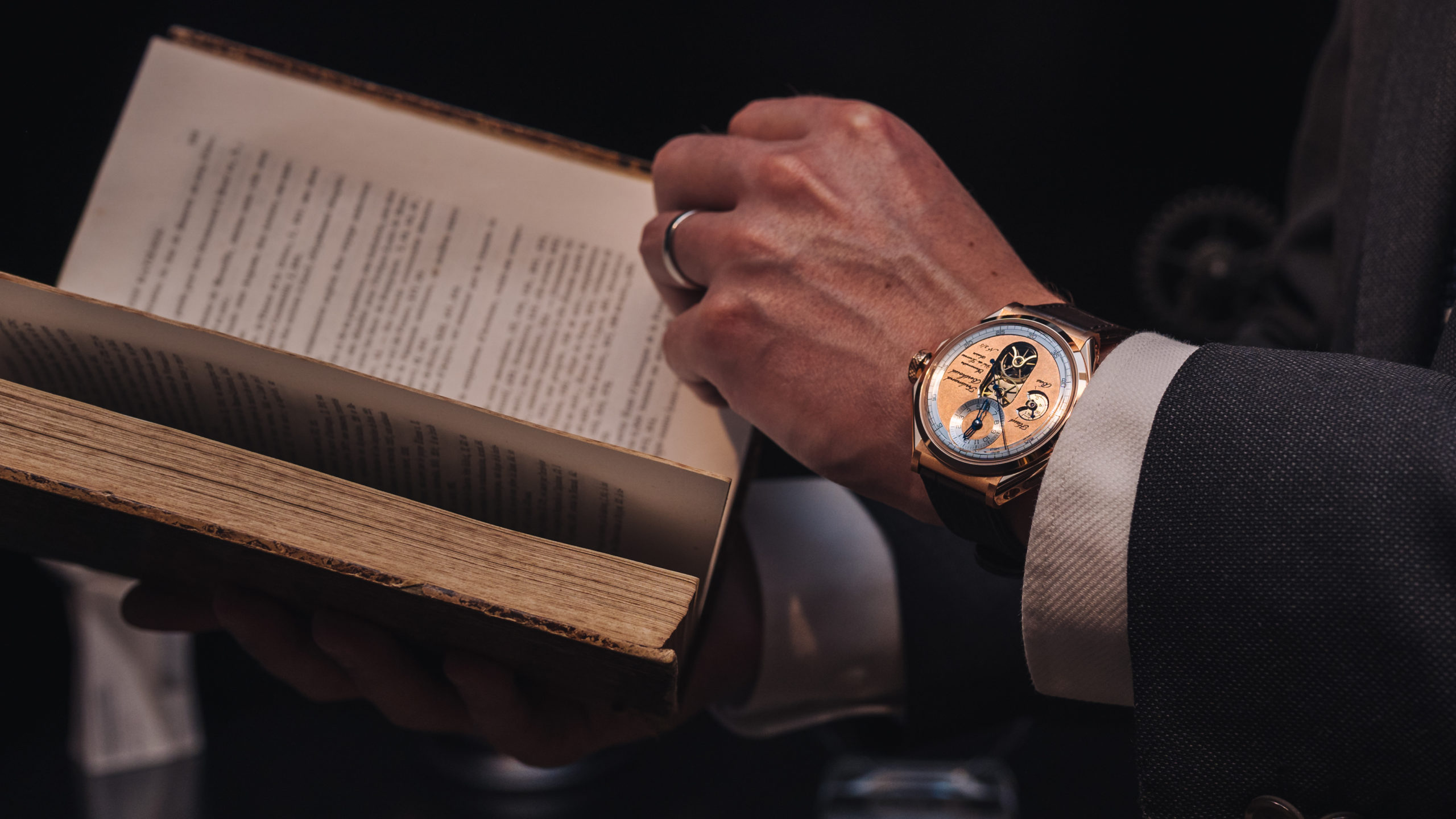 We’re still rounding up on all of the wonders from SIHH which kicked off a week ago now. One of my favourite brands there was Ferdinand Berthoud, which as I mention a lot, sent a watch to accompany me through two weeks of daily life last year (click here to read more). This year they returned with not necessarily a new complication like I was hoping, but instead a fantastic looking interpretation of a model in their own lineup. The Chronomètre FB 1 line has taken a historical twist, let’s have a closer look. 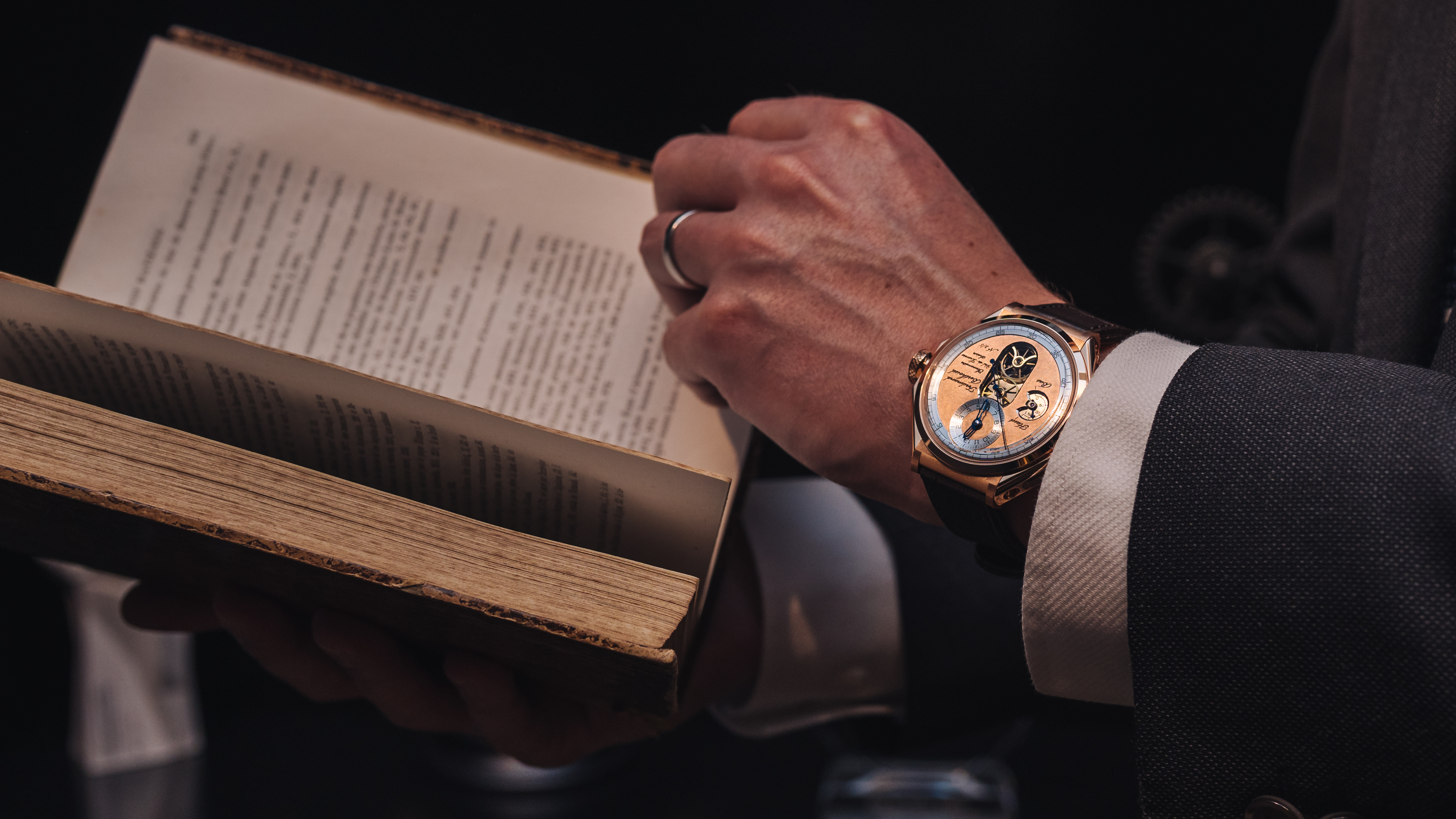 The Chronomètre FB 1.2-1 is a rose gold version of the classic FB 1 watch and, as such, features a cutout on the dial which allows us to see a small part of the going train inside the watch. Specifically, we can see the wheel connected to the back of the tourbillon driving the central seconds hand. Take note that very few tourbillon watches feature a running seconds hand in the usual tradition, it is usually placed on the tourbillon itself, or relegated to a subdial should the tourbillon not be on the dial side as is the case here. 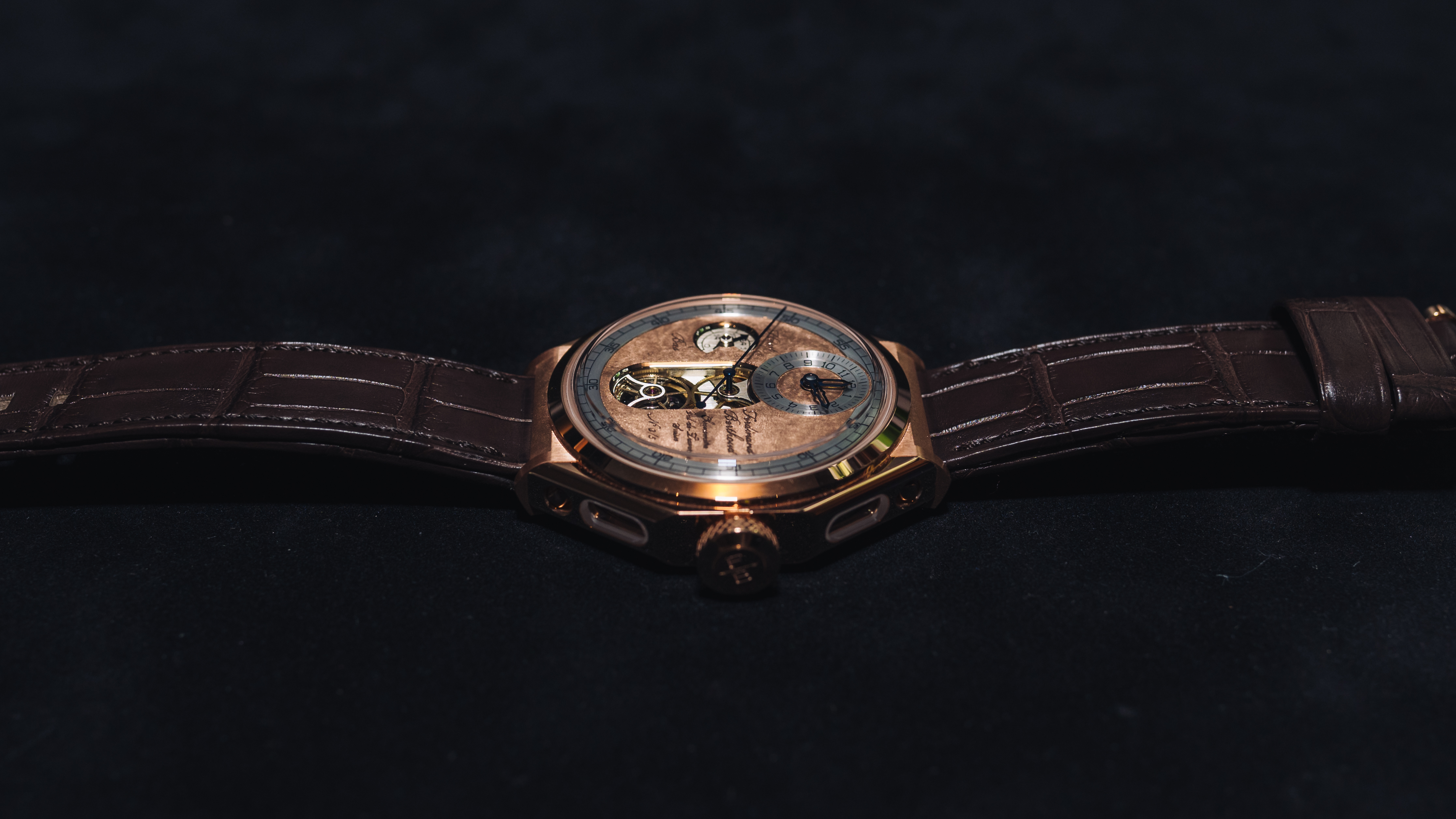 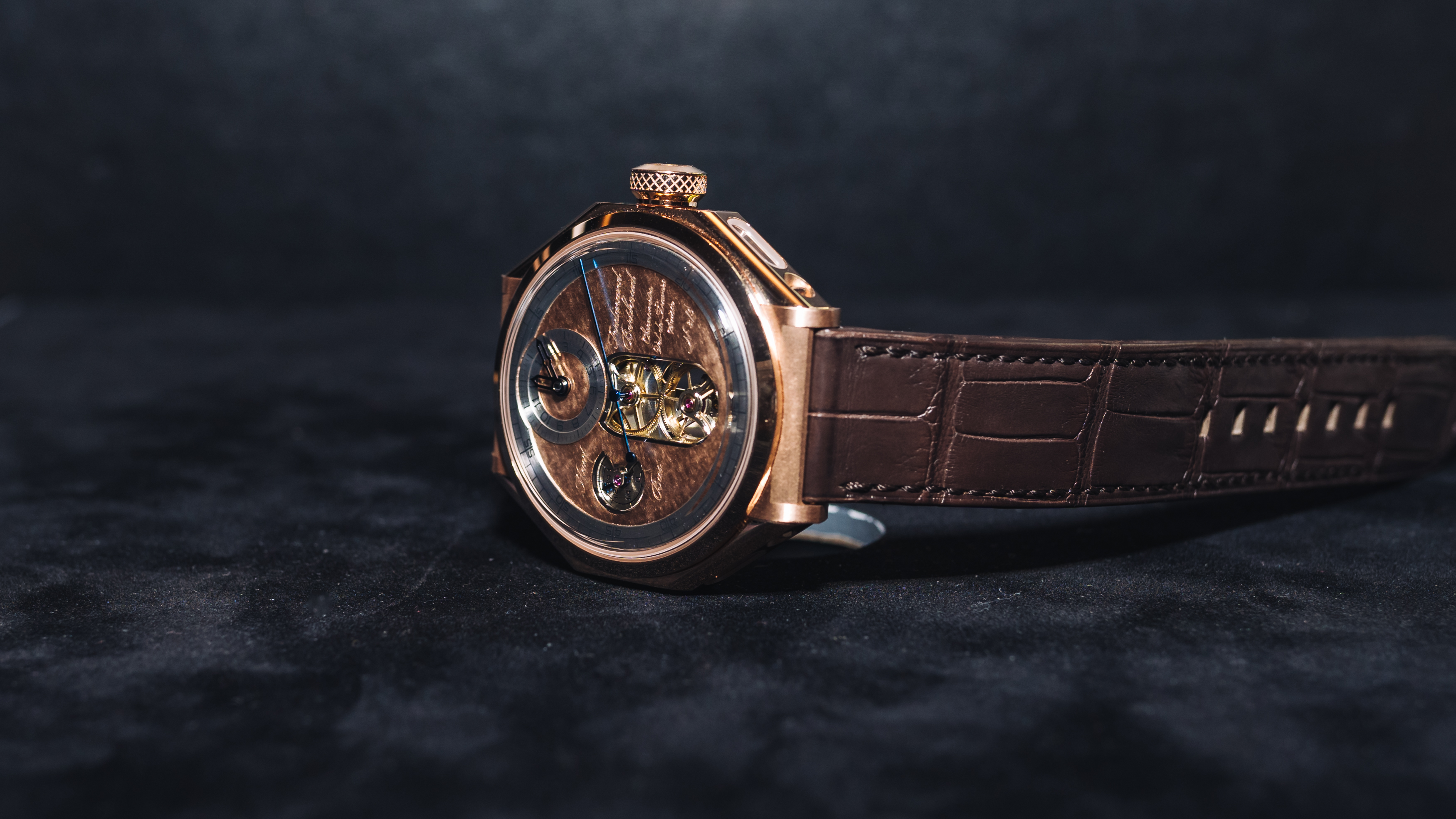 The dial of this watch is made of 18k rose gold and has a delicate patina that’s been hand applied using engraving techniques which had to be relearned entirely, as they had previously been lost. What completes the piece, though, is the handwritten script style font which replaces the modern block capitals that were used before. It still says the traditional stuff: Ferdinand Berthoud – Chronomètre – Val-de-Travers – Suisse, but it is now much more elegant and fitting to a watch which was styled after the text you might find on an original Ferdinand Berthoud piece. There’s also the small time dial and the power reserve indicator using the words ‘haute’ and ‘bas’, this indicator uses Ferdinand Berthoud’s complex cone assembly which is discussed further in my Fortnight Review. 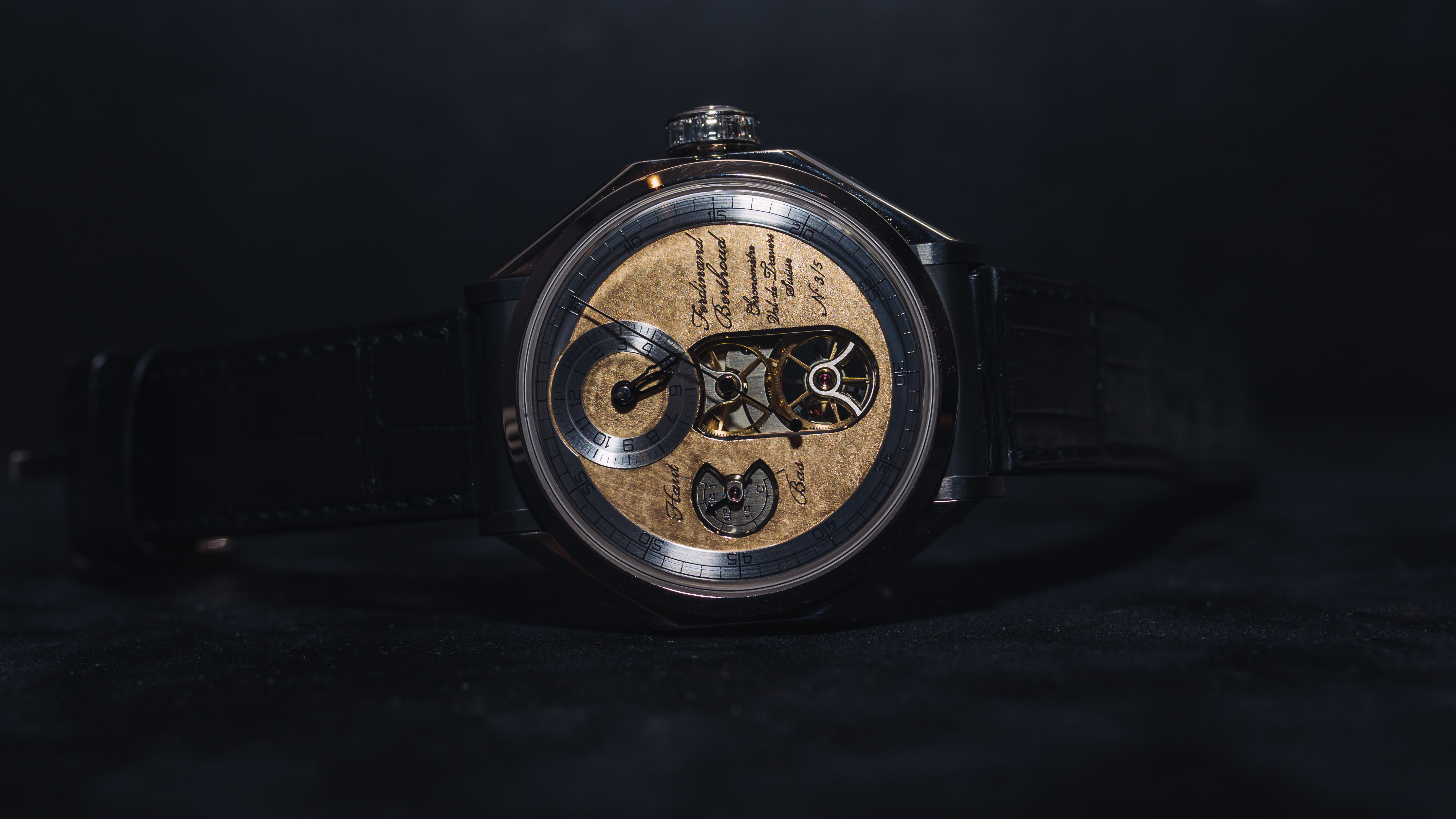 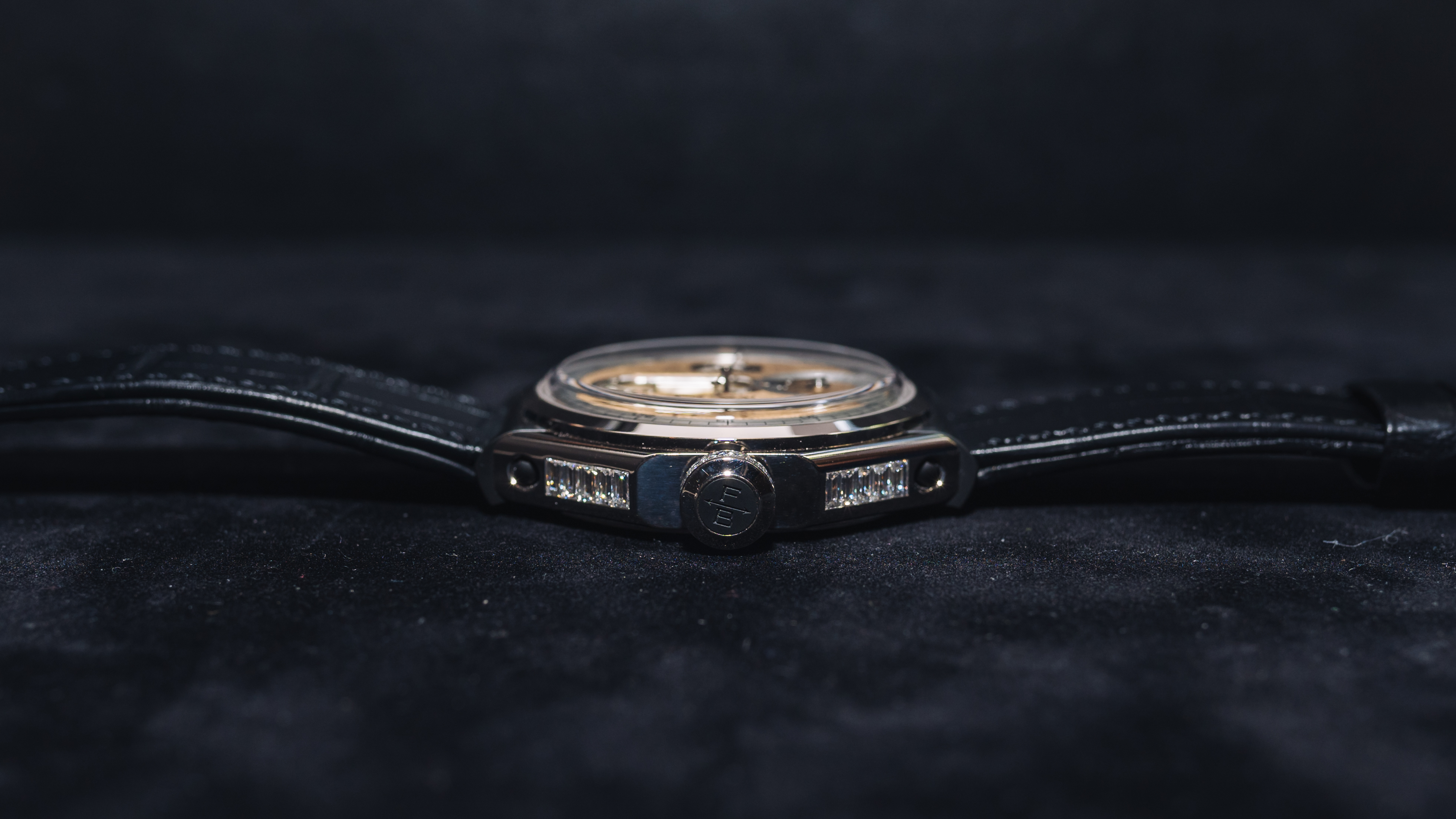 There are only a few differences between the rose gold FB 1.2-1 and the other watch they showed, my favourite watch of the show, the FB 1.1-2. The latter has a case crafted of 18k white gold, which has been polished to a mirror. Also, the small windows in the side of the case have been filled in with baguette cut diamonds, as has the rim of the crown. This subtle twist is right up my alley, and I’m glad to have heard the brand’s owner, Mr. Karl-Freidrich Scheufele (co-president of Chopard) state that this is their limit for diamonds on a watch. 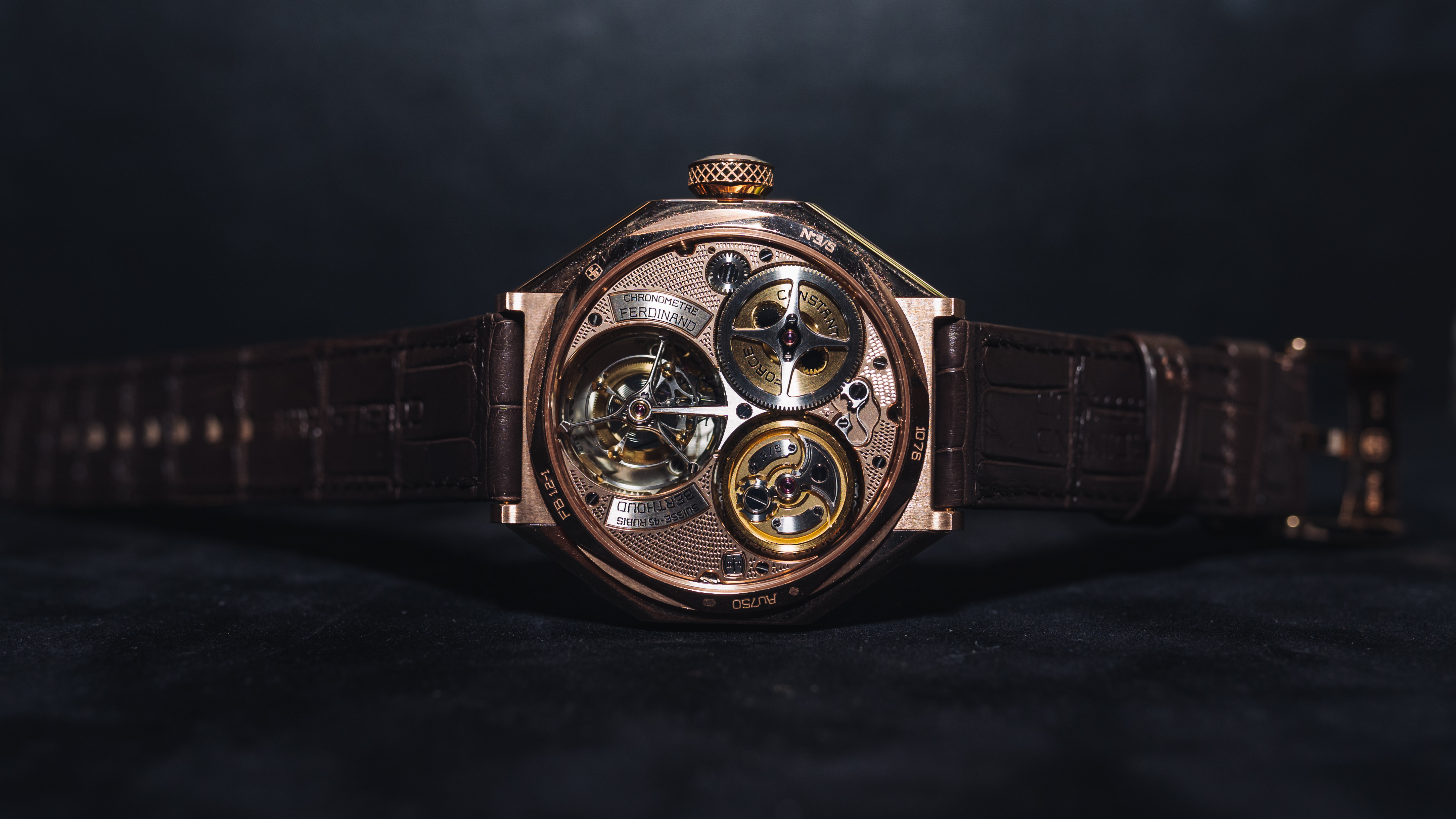 The excellently decorated calibre FBT-FC inside is the same in both versions, featuring highlights such as the aforementioned power reserve system, a fusée and chain and a tourbillon, made of 67 parts, most of which are titanium, that features an aerodynamic design which the brand states was designed by the Swiss Official Chronometer Testing Insititute. The run speed is 3Hz, and the power reserve is 53 hours. 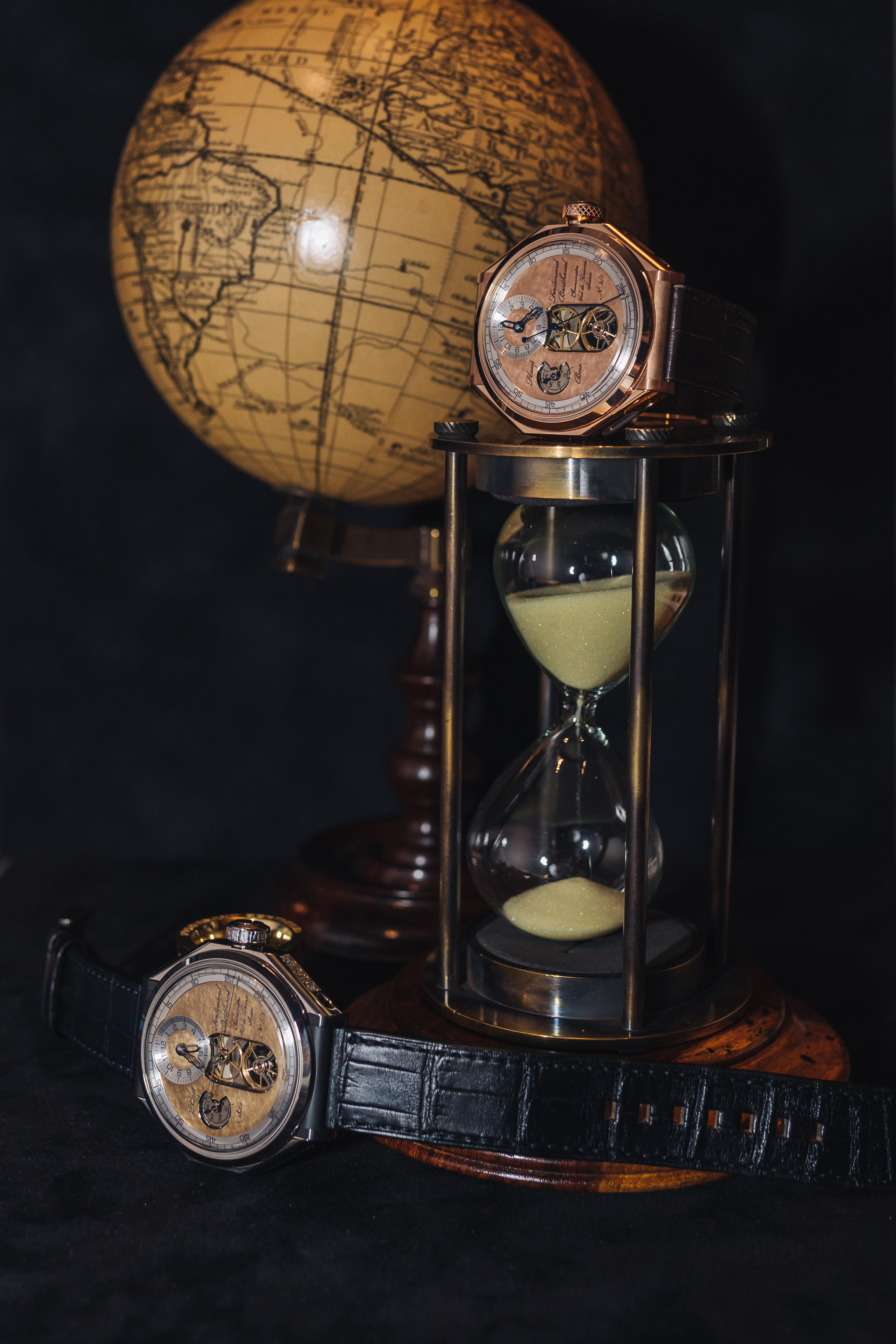 One extra item worth noting, the rose gold version features Ferdinand Berthoud’s first go at making every part of the case in precious metal. You might not have noticed it until now, but most of them use a black insert which adds durability to the watch, but on the FB 1.2-1 that’s replaced by rose gold for a harmonious design. The FB 1.1-2 uses a black ceramic lug with a DLC coated titanium set of screws. There’s a lot more value in this one thanks to the 1.99ct (20 baguettes) worth of diamonds on it, so it’s good to remain practical. One of the most intriguing things I found with the FB1R.6-1 is how practical and thought out it was.

Sadly, I’m unlikely to see one of these (though I will try) as both versions are limited to 5 pieces only, as indicated by the numbers on the dials. No prices have been announced at the time of writing. Visit Ferdinand Berthoud here.