1970′s Heuer Autavia GMT Ref. 2446C – As it turns out, a couple of weeks ago I actually killed two birds with one stone on my Friday gallavant down Bond Street. While in Watches of Switzerland looking at the JLC (aforementioned here), I also spotted this Vintage Heuer Autavia GMT, which was not too shabby in condition.

It was a good thing I decided to have a closer look at this vintage timepiece. Again it was in great condition, as was the JLC, also having the same feel and looks (which I’m sure this has something to do with manufacturers sharing parts back then)? The difference with the Heuer over the JLC was that it had a GMT function. Utilising the Valjoux 724, this allowed the owner back then to tell the time in two different time-zones or just simply allowed them to view the 24hr time; also coupled with this was the chronograph movement, which was also just as responsive as the JLC, being firm and crisp. 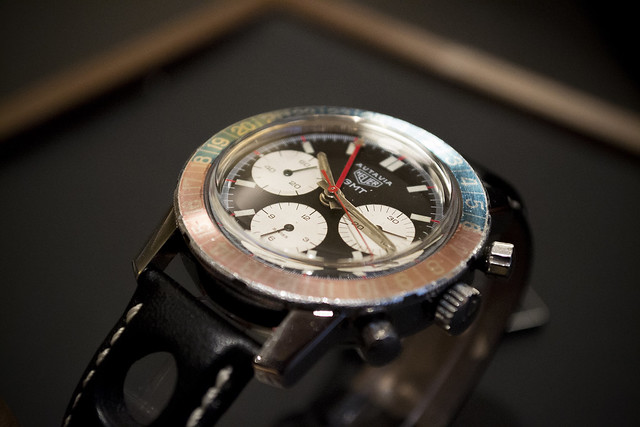 I absolutely love the use of colours in this dial, making everything stand-out and easily legible, one thing Heuer always done with their watch dials. This one fitted with a sportier racing strap (which – kind of works)…..?

For it’s age, this Heuer Autavia GMT still feels very solid; which is testament to the build quality employed back in the 70′s. It’s always great to see a vintage Heuer in such good condition. This one is now on sale at Watches of Switzerland on Oxford St. London in UK for £4450.