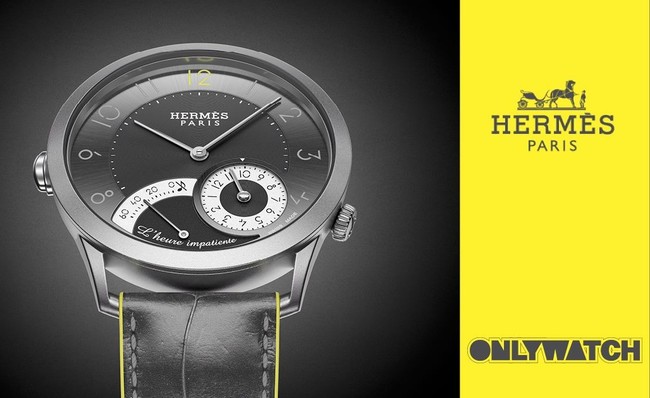 The excruciating feeling of waiting for a friend to turn up is universal. It doesn’t matter if you’re 6, 16 or 60 years old, but that kind of pace the room, peer out the window impatience doesn’t go away. But at the moment you see their car pull up outside, all that time spent waiting feels worth it.

The Hermes Slim d’Hermes L’Heure Impatiente is part of Hermes’ Poetic complications collection. Whilst the alarm function is a crucial part of the watch, it’s that finger-tapping against the table feeling of anticipation before an event that Hermes wants to focus on with their alarm/countdown complication.
Hermes, the French fashion house, is best known for their handbags, but for the last few years they have been releasing some amazing watches.  Whilst you pay a premium for the Hermes H on the dial, their watches are still exceptional works of horology. Not only do Hermes own their own movement manufacturer, Vaucher, but by partnering with watchmaker Jean-Marc Wiederrecht they have released two in-house movements. One of them is inside the Slim d’Hermes L’Heure Impatiente.

Say its 12 o’clock and you’re having friends round at 7. You use the crown and pusher at 4 and 9 o’clock to set the alarm sub-dial to the desired time. As the day continues, the watch ticks away until 6 o’clock when the 60 minute countdown timer at the bottom of the dial activates. Over the next hour as you think to yourself “Why are they taking so long!“, you check your watch and see how little the retrograde hand has moved. The more you check, the slower it seems to move which means you check it even more. Upon the countdown timer completing, the watch chimes to alert the wearer that the moment of anticipation has arrived (Or, if you have friends like mine, that announces you’ve got another 20 minutes to wait till they actually turn up!). 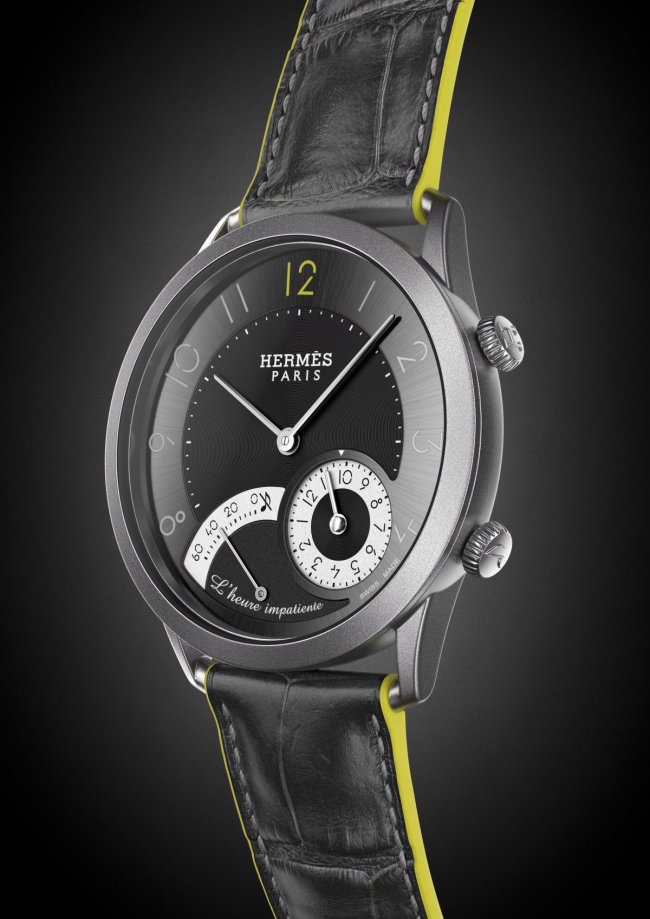 To allow for maximum volume, the watch dial does not touch the perimeter of the case which allows the sound to exit through the front of the watch, like sound holes on a violin. The movement is only 31.96mm so there is ample room for the sound to reverberate inside the 40.5mm case. The Jean-Marc Wiederrecht movement took 5 years to develop and is mounted atop the in-house Hermes Caliber H1912 which had a 50 hour power reserve. 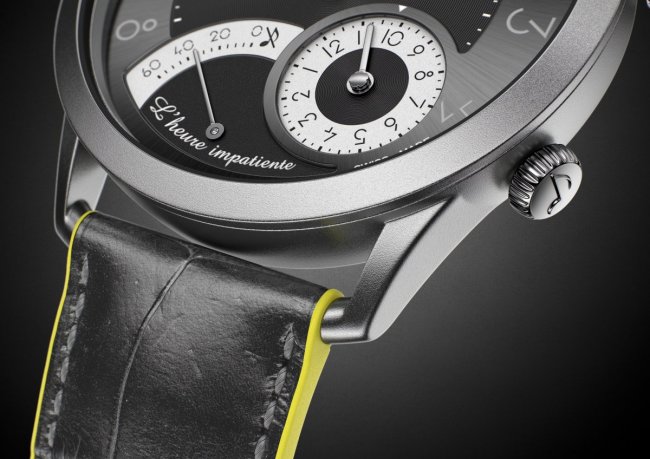 Not only is the watch a unique twist on the alarm complication, but it is a truly beautiful watch. The regular production Slim d’Hermes L’Heuere Impatiente is made of rose gold but for Only Watch, Hermes changed the case material to Grade 2 Titanium. This gives the watch a contemporary look that the soft hues of rose gold cannot match. The numbers on the dial were designed by award winning graphic designer, Philippe Apeloig.

The feeling of impatience is an odd feeling to encapsulate into a watch complication, but this is not the first time that Hermes have played with the concept of time. A previous watch made in partnership with Jean-Marc Wiederrecht was the Le Temps Suspendu or ‘Time Suspended’. This watch allows the wearer to stop the display of time on the dial whilst the movement inside kept on whirring. This was an attempt to capture that feeling of knowing a glance at a watch dial will awaken the realization that whatever fun you’re having will have to end at some point. If the watch shows no time or an incorrect time, you’re given a moment’s respite from the realities of time.