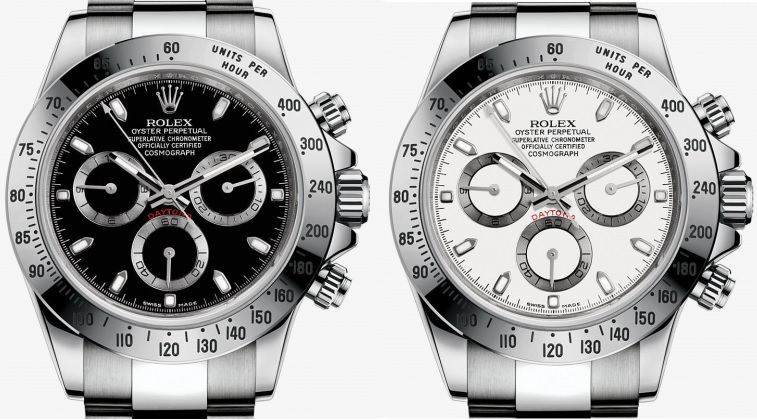 A Brief History of the Rolex Daytona

Sit up, eyes forward and make sure you have a notepad and fountain pen at the ready for today’s history lecture. Putting a dictaphone (who even has those now?) on my desk and then going for a snooze is unacceptable for today we’ll be looking at the history of another of the most popular and iconic wristwatches the world has ever seen. Last time we had the Submariner, well now it’s time for a look at one of their best pieces and most elusive pieces, the Rolex Cosmograph Daytona.

It all starts with a man called Sir Malcolm Campbell. He’s quite well known in both Great Britain and the United States, but for others who are unfamiliar with him, he was the first proper ambassador for the Rolex company. He’s known for setting many many land speed records in British cars on the Daytona Beach in Florida. It became quite a spectacle at the time for the residents of the area to go and watch the British man come down and race his British car along the sands and break as many records as possible in one go. This captured the imagination of Rolex and its founder, Englishman Hans Wilsdorf which eventually used pictures of Sir Malcolm in their adverts for the ‘Oyster’ wrist watches. 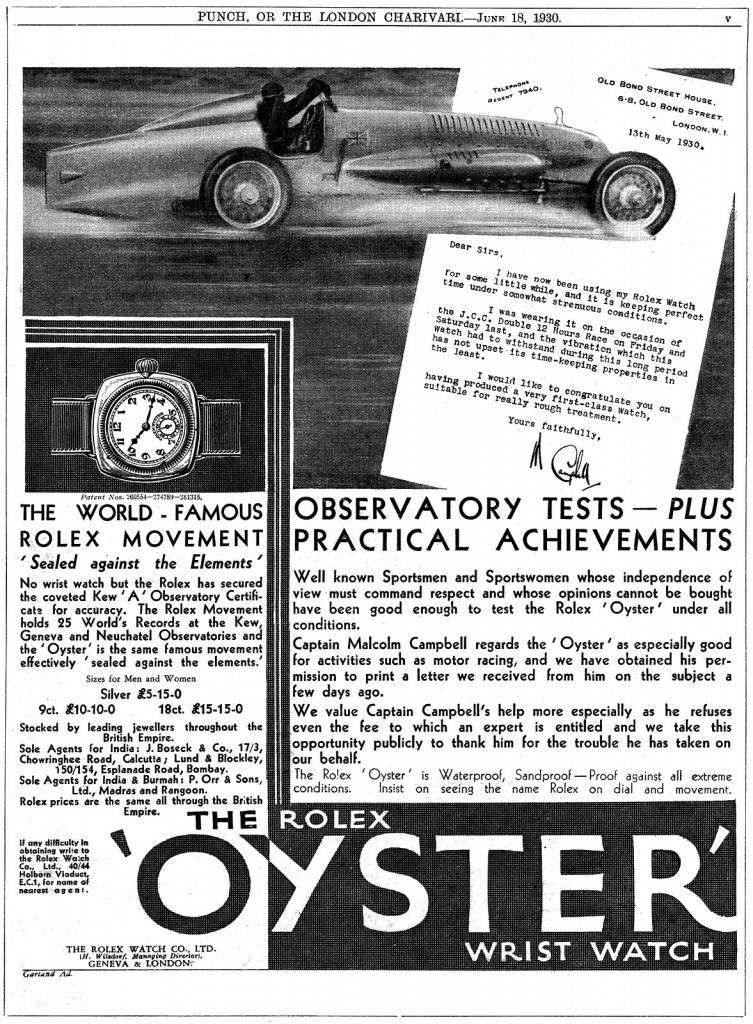 This local tradition that had formed all suddenly stopped one day in 1935 when Sir Malcolm Campbell came and looked at the track and frowned with disapproval. He noted that the track itself was becoming worm and had holes developing in it. He then decided to move to the Bonneville Salt Flats and from that moment on I expect some people just didn’t know what to do with themselves any more.

However all was not lost for them. You see, Sir Malcolm Campbell was good friends with another man called William France. He moved to the area in 1935 and continued to make use of the sand. To those who don’t live in America or simply haven’t heard of him, William France was the father of the most popular American motorsport, NASCAR. In 1938 he took over management of the annual running of the world’s first stock car race which lasted for 78 laps (roughly 250 miles or 400km). 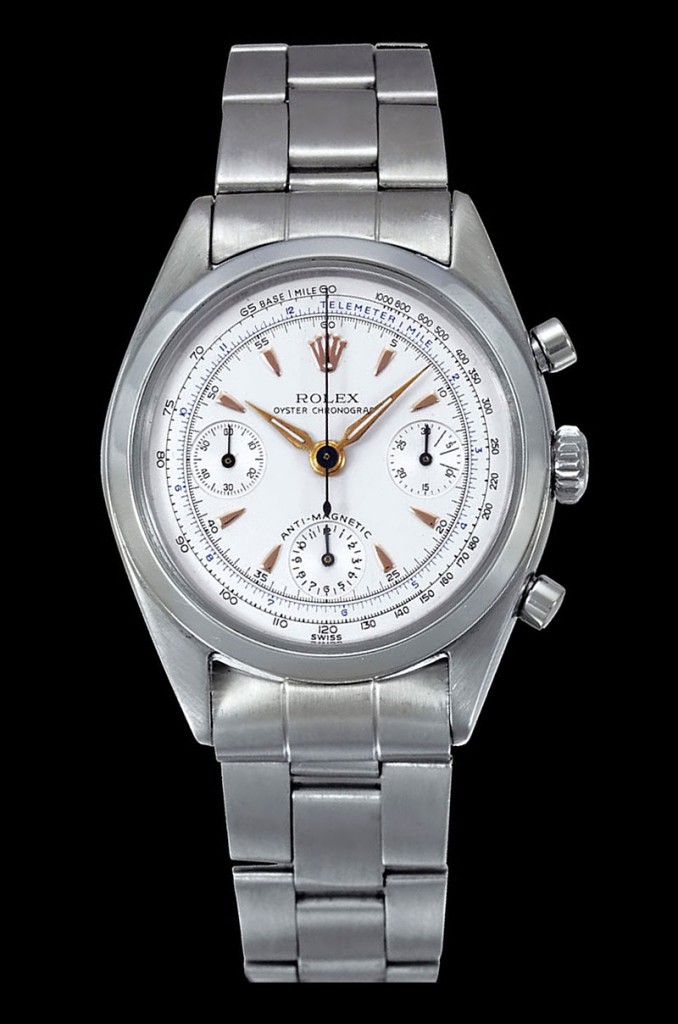 In 1955 Rolex launched the Daytona line and the GMT Master for Pan-Am Airways too. The Daytona Ref. 6234 was produced for 6 years with a total of around 3000 being made (Rolex averaged around 500 Daytonas a year). It was a manual winding affair, unlike the current Daytona, and features some similar design cues as well as some that are completely different. The cosmograph name was registered by Rolex in 1953 and was used on some complicated moon phase watches starting in 1956. It wasn’t until the late 60s that Rolex would eventually plonk the words Rolex Cosmograph on the dial, replacing the word Chronograph. It’s believed that the name came from the previous interactions that Rolex had with motorsports on the Daytona Beach as well as celebrating the rise of NASCAR (an event for which Rolex made the official timepieces), which is like stock car racing except the cars are of much higher performance. The name Daytona eventually appeared on the watches in 1965. 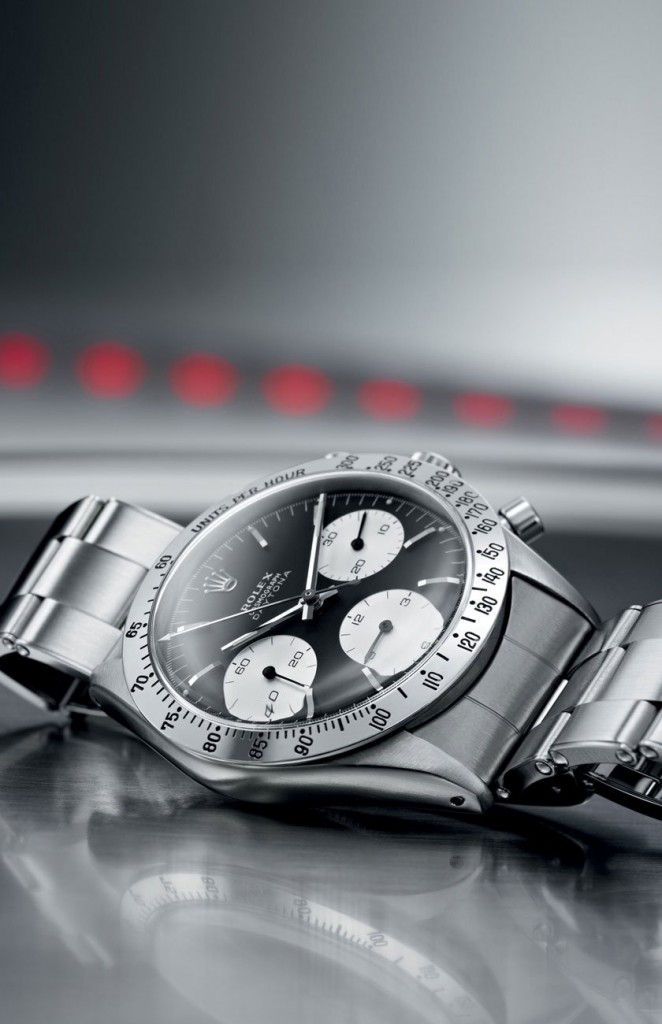 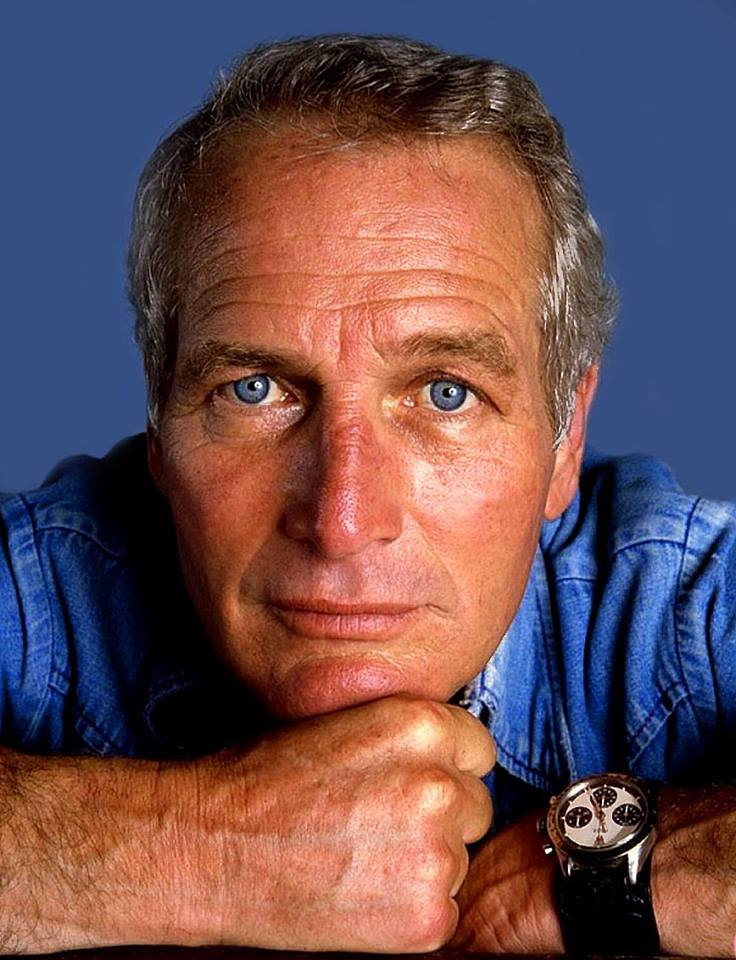 The rest, as they say, is history. But not for us, as just around the corner for Rolex was perhaps their most exciting time yet. When Paul Newman was spotted wearing a Rolex Daytona the world went berserk for them and would eventually lead Rolex to make a homage watch to his legacy. He’s still the most famous person to ever wear one. The watch itself was re-touched to have a slightly different look to the dial and even now a Paul Newman Daytona is a seriously valuable collector’s item. Omega had the Silver Snoopy Speedmaster, a watch focused around the award NASA gave them because of their contributions to the space program, but the Paul Newman Daytona is still more well known and sought after. A little consolation for Rolex can be found here, considering that Omega beat them to the moon with the Speedmaster. 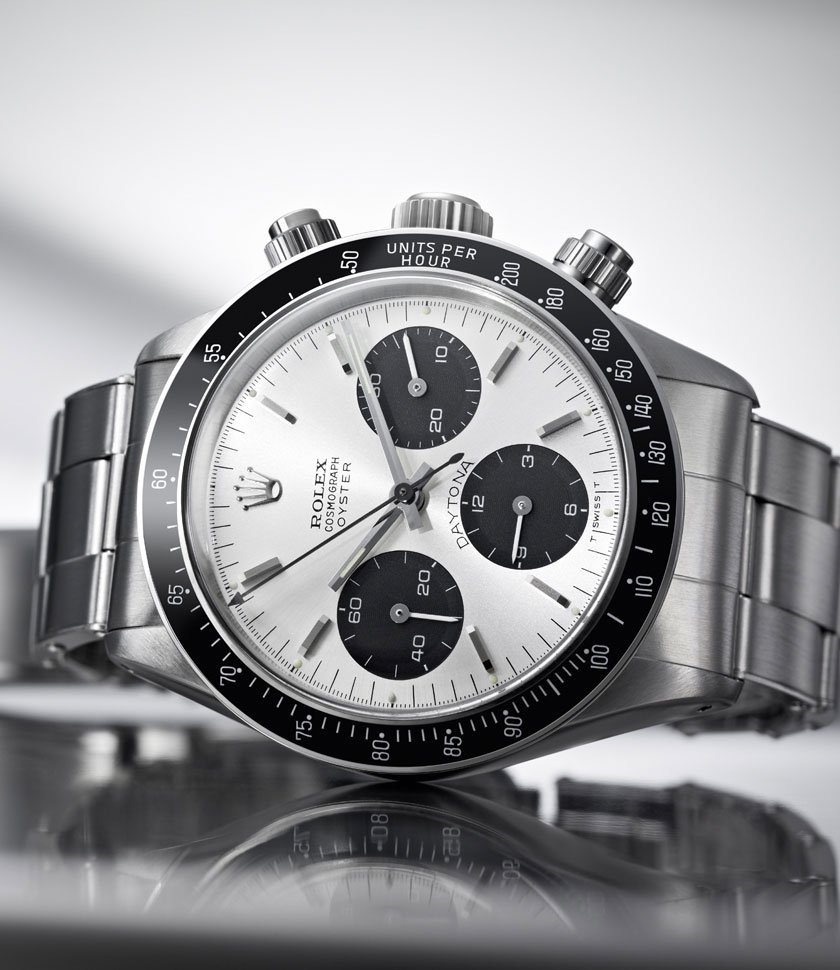 The 1965 model was equipped with a tachymetric bezelwith a black insert and white graduations for increased legibility. 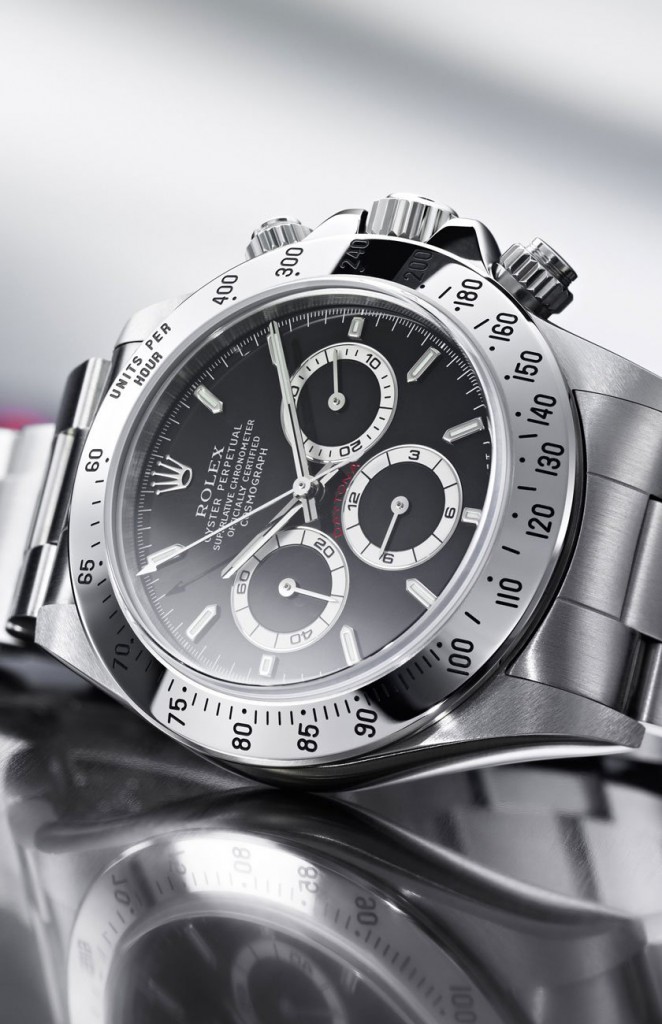 The redesigned 1988 version formed the basis for the cosmograph daytona’s imposing and elegant appearance today. 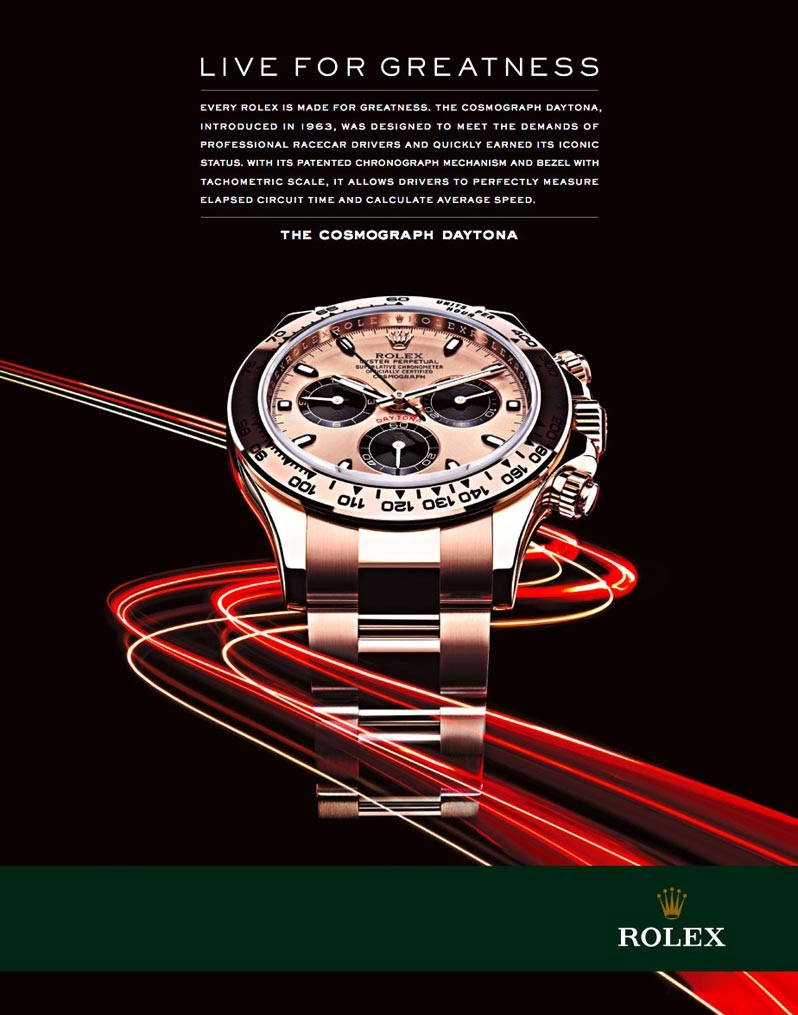 The modern interpretation of the Cosmograph Daytona. Made in Everose pink gold with black sub dials, similar to the Paul Newman Daytona. 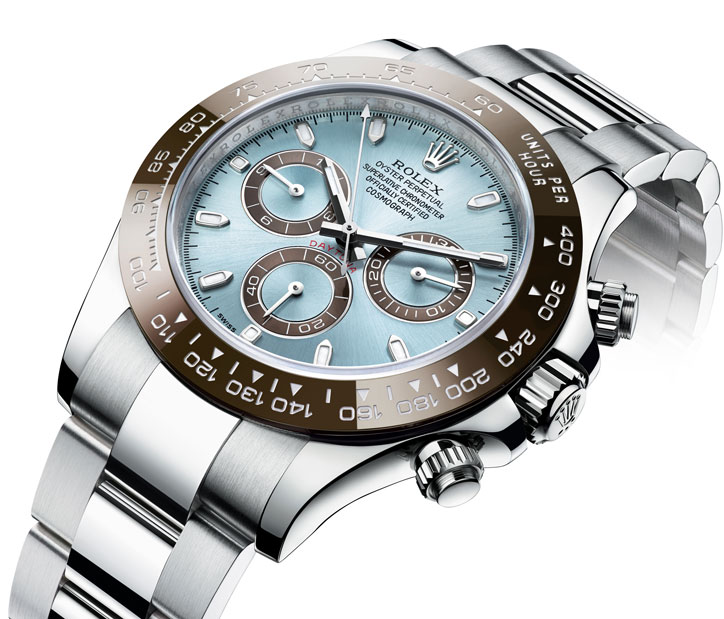 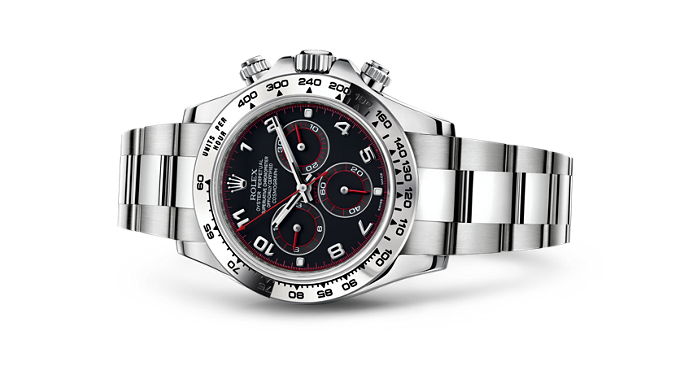 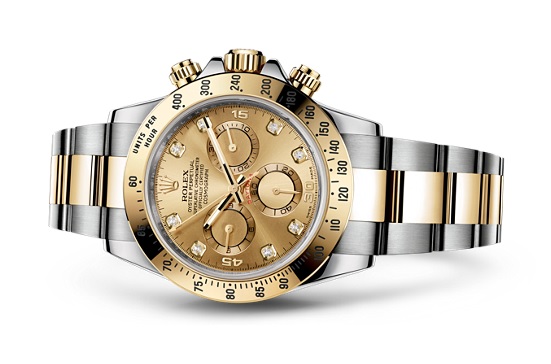 Even now the Daytona is still an icon. I’ve worn many myself and I can confidently say that they are one of the most solid performing chronographs ever along with those from the likes of Omega and Audemars Piguet. The fact that Rolex purposely limits the amount of Daytonas they make per year only increases their overall value and desirability with a maximum of a 3 year waiting list for the steel only versions. It’s pretty fair to say that the Cosmograph Daytona will be with us for a while yet. For more info, please visit rolex.com