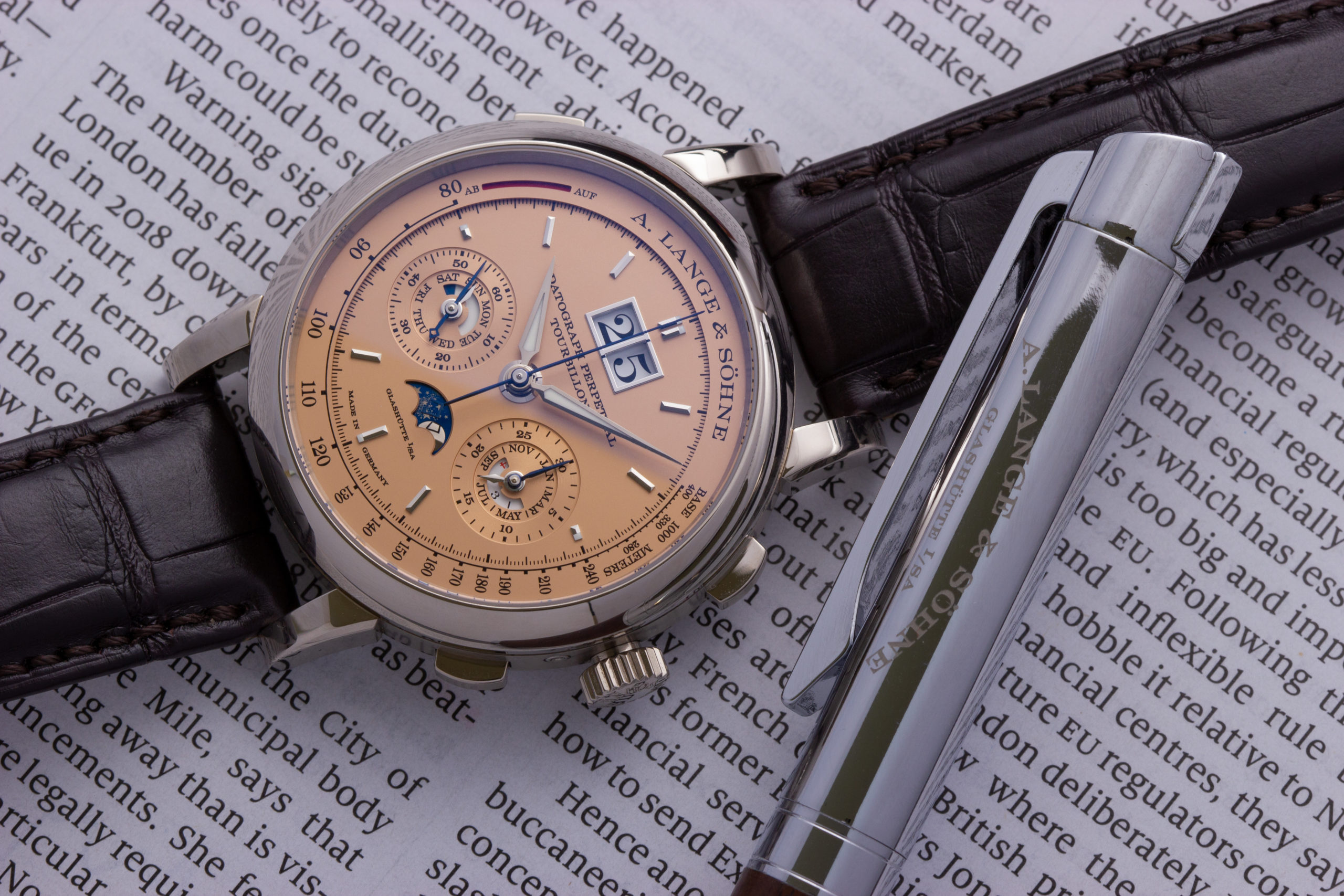 A Fortnight Review: Two Weeks On The Wrist With The A. Lange & Söhne Datograph Perpetual Tourbillon Ref. 740.056 Watch

The Datograph is, as many other sources have said, undoubtedly one of the greatest chronograph watches of all time. We could leave that there and just let the pictures do all the talking, but I think I’d be out of a job pretty quickly if I did that, so here goes. Unveiled at SIHH (Salon International de la Haute Horlogerie) 2019, the Datograph Perpetual Tourbillon I have here (ref. 740.056)  features a salmon coloured dial which fits the current fishy colour craze going through the watch industry. I was always a little sceptical of the salmon colouring for dials, I was never really sure whether it was a good thing or not. Now that I’ve seen one in the metal, my doubts are behind me. 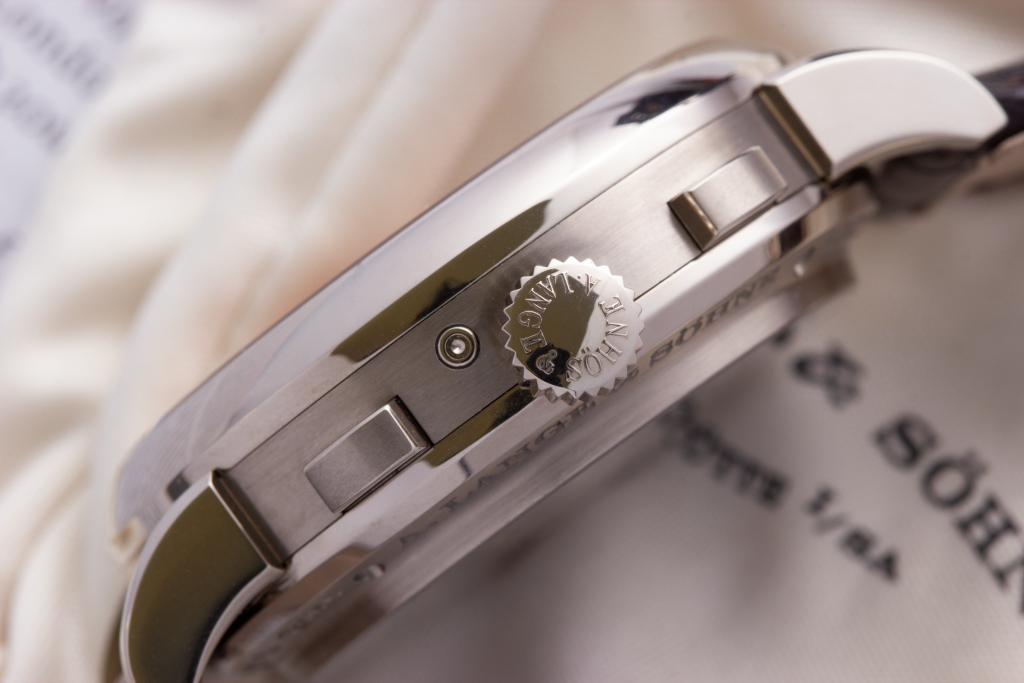 The watch sits proud of the wrist thanks to the caseback which isn’t flat, but it isn’t top heavy

Where to begin with this watch? I think it’s fair to say that this is grail material for at least 95% of the watch enthusiast world. It doesn’t even matter if you only collect vintage watches, for example, you’ll be bowled over by the Datograph Perpetual Tourbillon. So, let’s give an idea of how this watch wears on the wrist: big. That’s it, big. It wears big because it is big, but more importantly because it is very thick as well. The case dimensions are 41.5mm by 14.6mm, which means that it’s only marginally larger than the Datograph Perpetual that we got to have a Fortnight Review of last year, the dimensions of that watch being 41mm by 13.5mm. You wouldn’t think that the extra millimetre would make a noticeable difference, but it absolutely does. 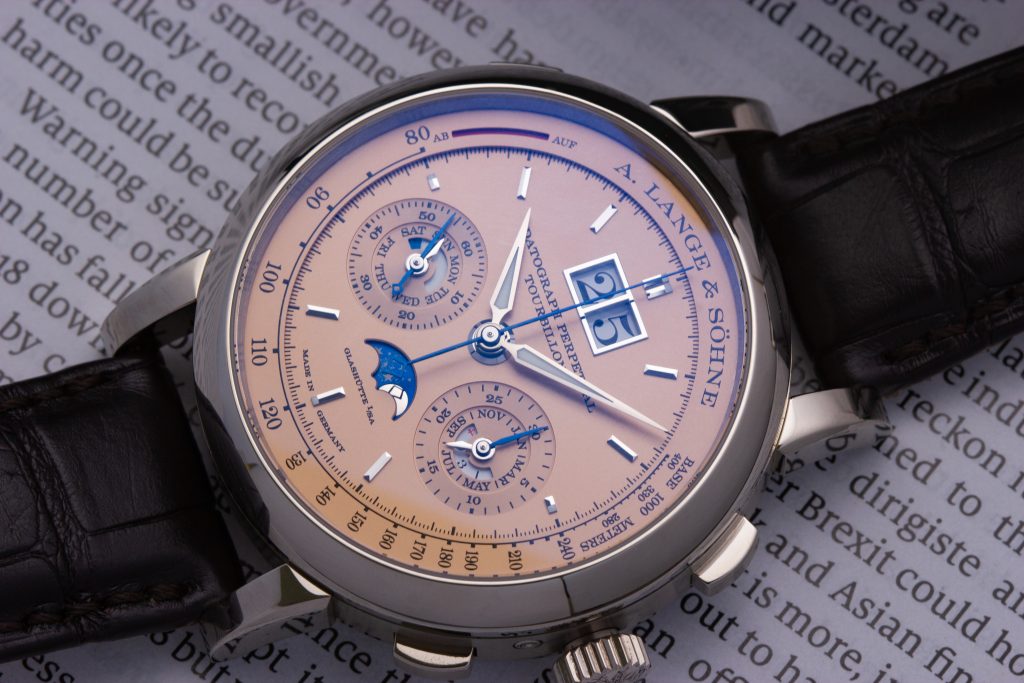 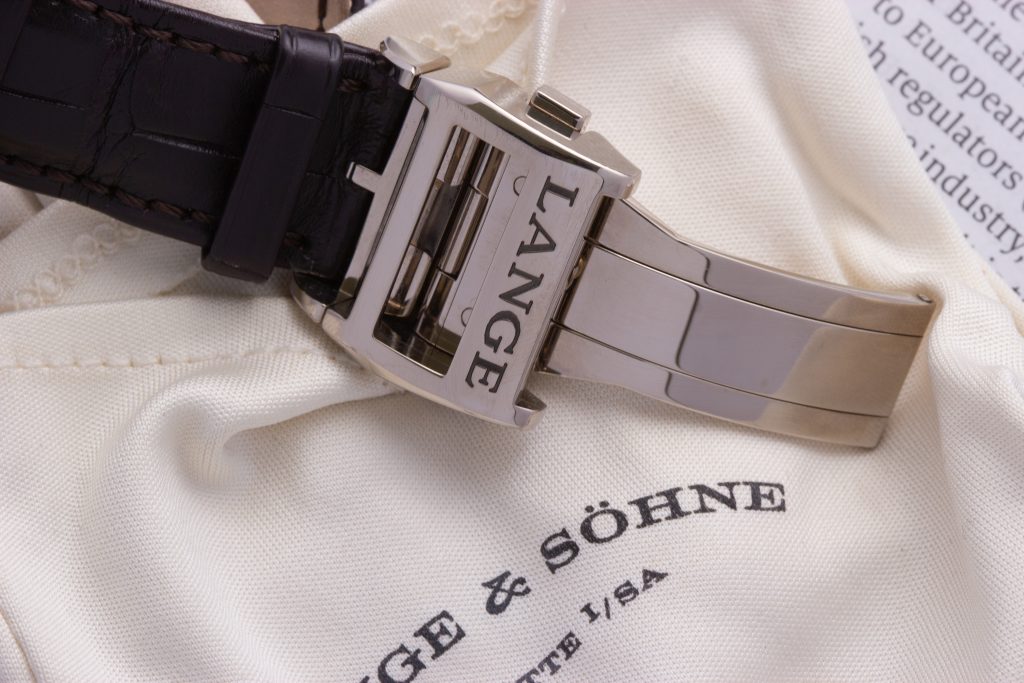 That’s not to say that the watch is cumbersome, far from it, the strap firmly holds the piece in place on the wrist, and you can have confidence in the solid gold twin pusher folding clasp. Don’t expect to wear this and not notice, though, as I’ve said in countless articles on A.Lange & Söhne watches before, their complicated watches are meaty. Compared to Swiss watches which tend to have an elegant lightness to them, the Datograph Perpetual Tourbillon has a solidity brought on by the large dimensions and the sheer mass of the thing. According to our patented VSS (Very Scientific (kitchen) Scales), this watch weighs in at 171 grams, for reference, this year’s GMT Master 2 BLNR from Rolex weighs 142 grams, and you can feel the heft thanks to the white gold case and clasp. 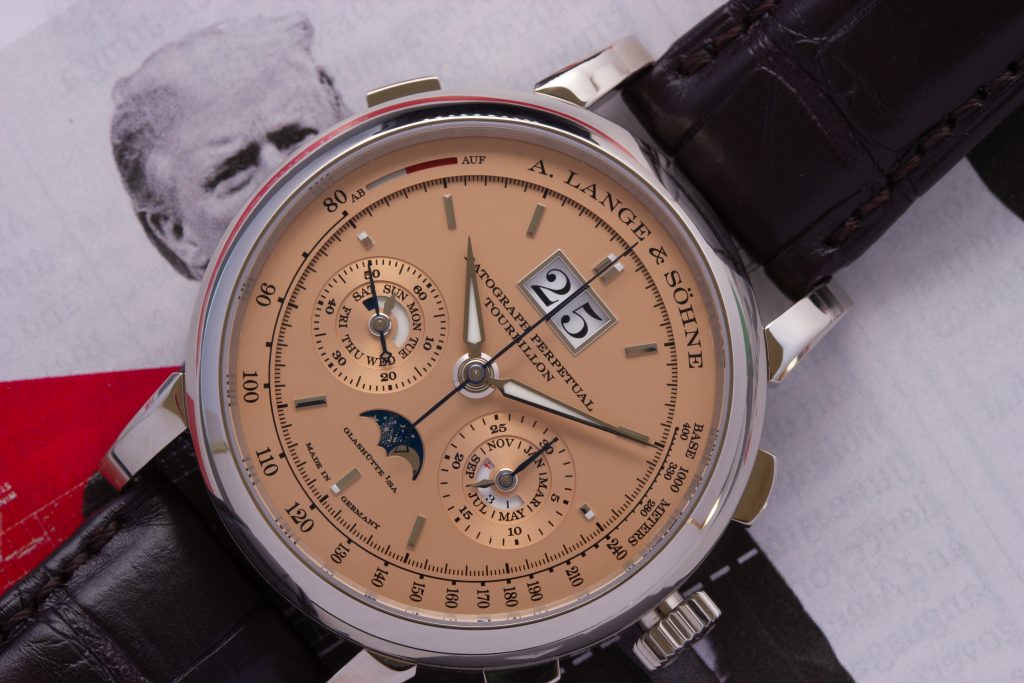 However, there again lies the beauty of this watch in that it’s totally approachable, you can wear this on the wrist, and it’s comfy, it gives you confidence. Now, how much of that confidence comes from wearing a certifiable grail watch I’m not sure, and I don’t really want to find out either. Part of that reason stems from the salmon coloured dial. A new trend that A. Lange & Söhne has run along with. The dial is solid pink gold, and the colour makes it just right with the skin tone of my wrist, that’s important for me as the wearer as it makes the watch look more at home when worn as it blends in better. Could salmon dials replace white dials on dressy watches? 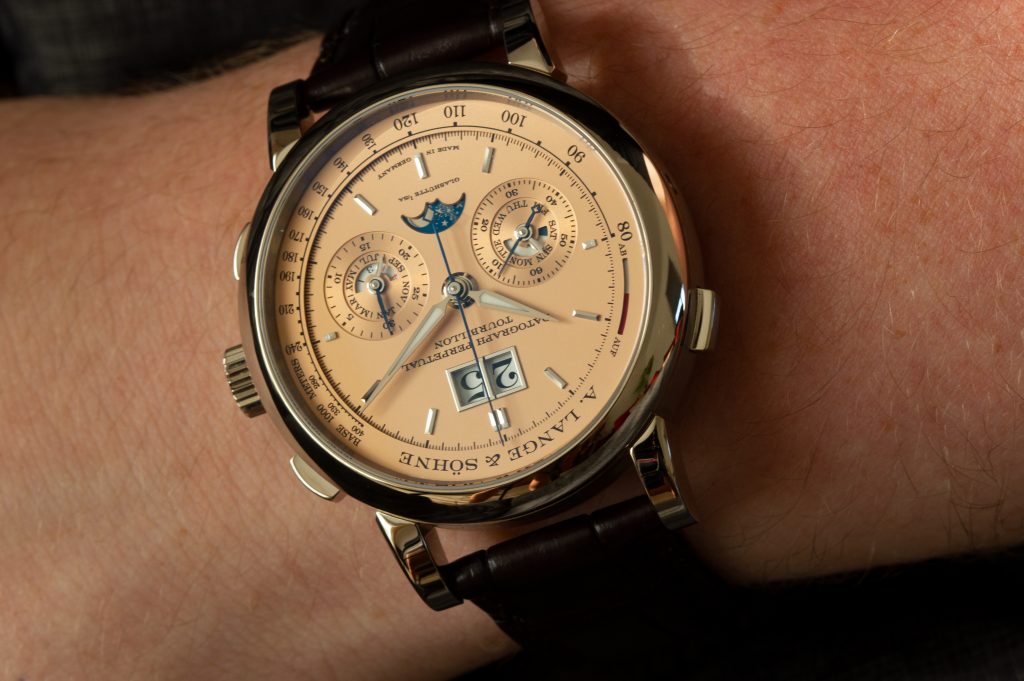 Photographing it was quite a challenge, I wasn’t sure whether a darker or lighter background would do the trick, so I settled on a mixture and grabbed my June 29th edition of The Economist and had a go. To be fair to A. Lange & Söhne (and myself) the salmon colour is exceedingly susceptible to changes in lighting conditions, even the press release photos change the hue of the salmon compared to mine which use a cool coloured light source diffused into a lightbox for the most part. You can see the colour change slightly in a couple of the wrist shots which were taken outside, and one with the evening sun shining directly on the wrist. 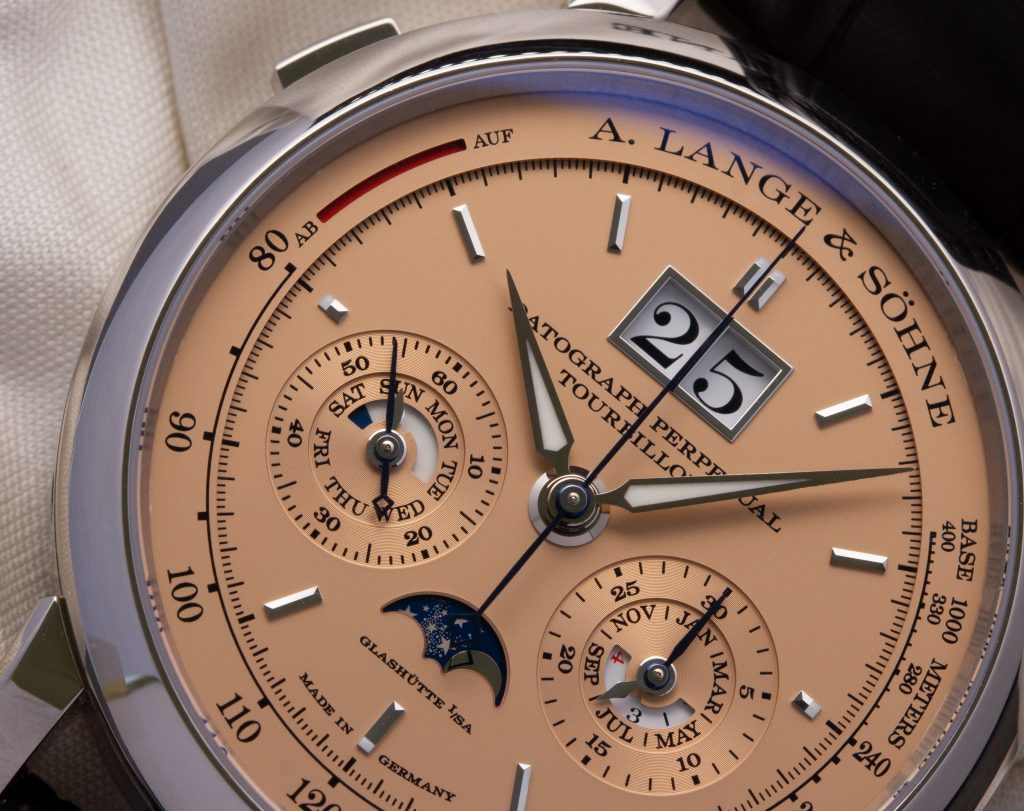 The legibility of this watch is, I’d say, good, especially for the type of watch that this is. The actual time reading is easy as on any other watch, and the chronograph only has two hands, reading the date is easy too, thanks to A. Lange & Söhne’s classic Outsize Date which appears near the twelve O’clock position. The Datograph Perpetual Tourbillon uses a slightly different method for indicating the calendar. They must have been reading our work as a small gripe from the Masthead in last year’s review of the Datograph Perpetual sans Tourbillon was that the small dials made it a little harder to read. 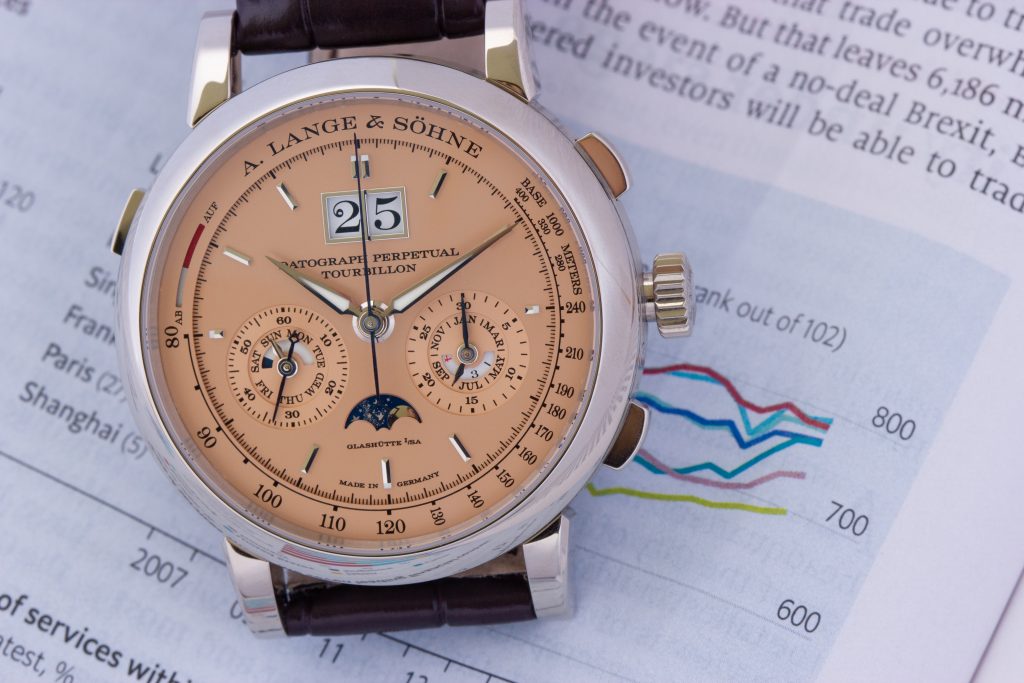 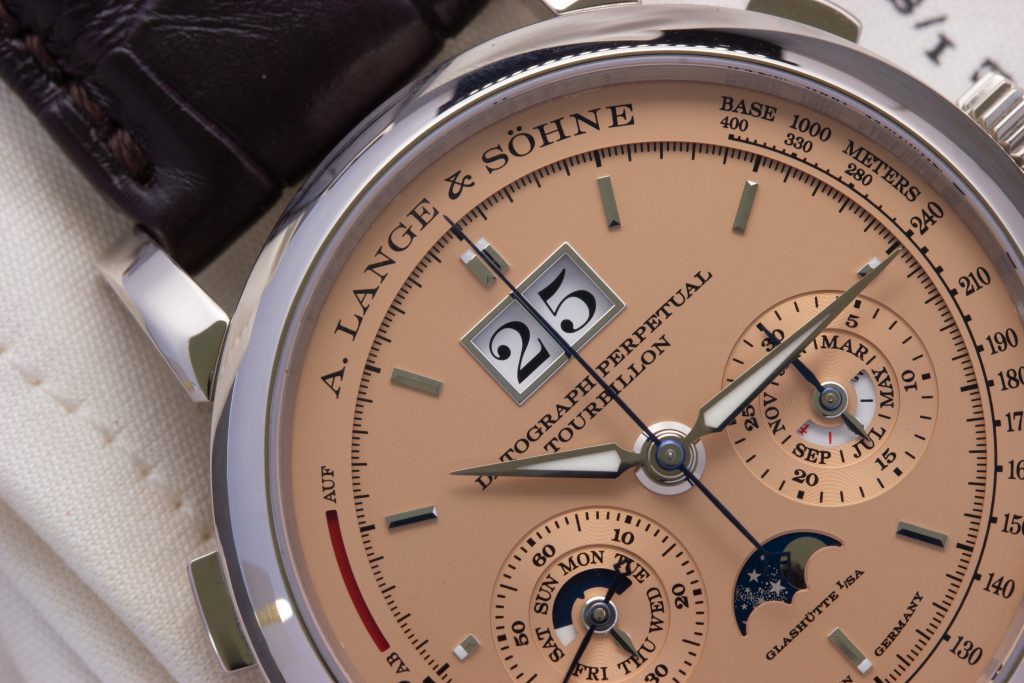 The Datograph Perpetual Tourbillon makes use of small windows to indicate non-essential information, which frees up the dial for better legibility

Enter the Datograph Perpetual Tourbillon, which replaces small integrated subdials with windows where possible. The traditional Datograph layout remains, the Outsize date plus two subdials, but nested inside the subdials are the day/night indicator and the leap year indicator. This information is non-essential to the wearer and is better suited here as it tidies up the display. Like most brands, A. Lange & Söhne uses colours to distinguish functions on busy dials. The chronograph seconds, minutes and the running seconds of the watch use heat-blued hands, the rest have polished white gold hands. The chronograph is simply a thirty-minute chronograph on this watch. You’d have your butler on standby with an iPhone to time anything longer anyway. But, in true A. Lange & Söhne fashion, if something can be made more complicated, it probably will be. The counter for the chronograph minutes is a jumping counter, that is, the hand will advance one step forward after one minute rather than slowly crawl around the subdial like in most chronographs which requires extra gears to do so, usually a remontoire type system which builds up enough power for one jump. 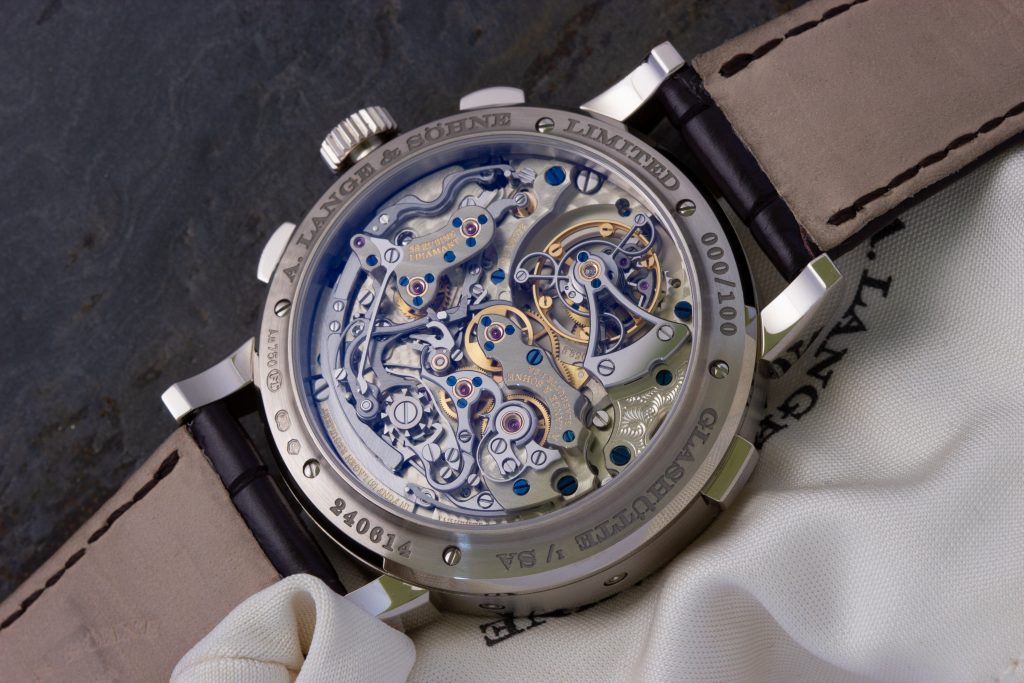 As I have mentioned already, complicated watches from A. Lange & Söhne are generally larger than their equally complicated Swiss counterparts, but that is not necessarily a bad thing. In this case, it allows room for the large and decadent movement which is on display to the rear of the watch. The calibre L952.2 is astonishing to look at. You take one look at the back of this watch and suddenly remember why it is you’re into watches in the first place. It’s like a little city in there! 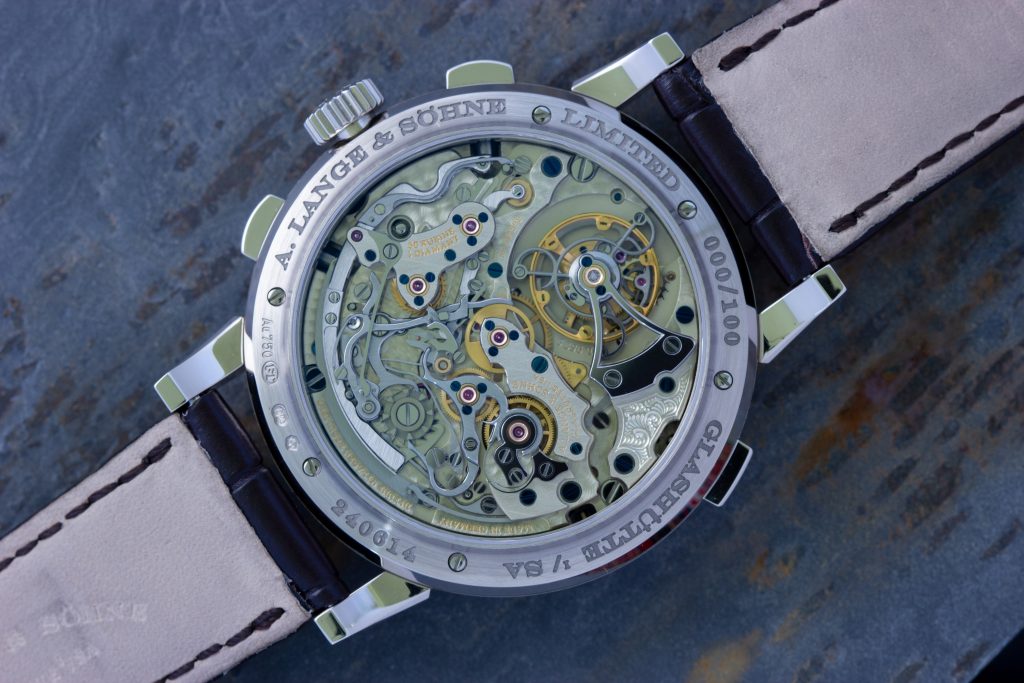 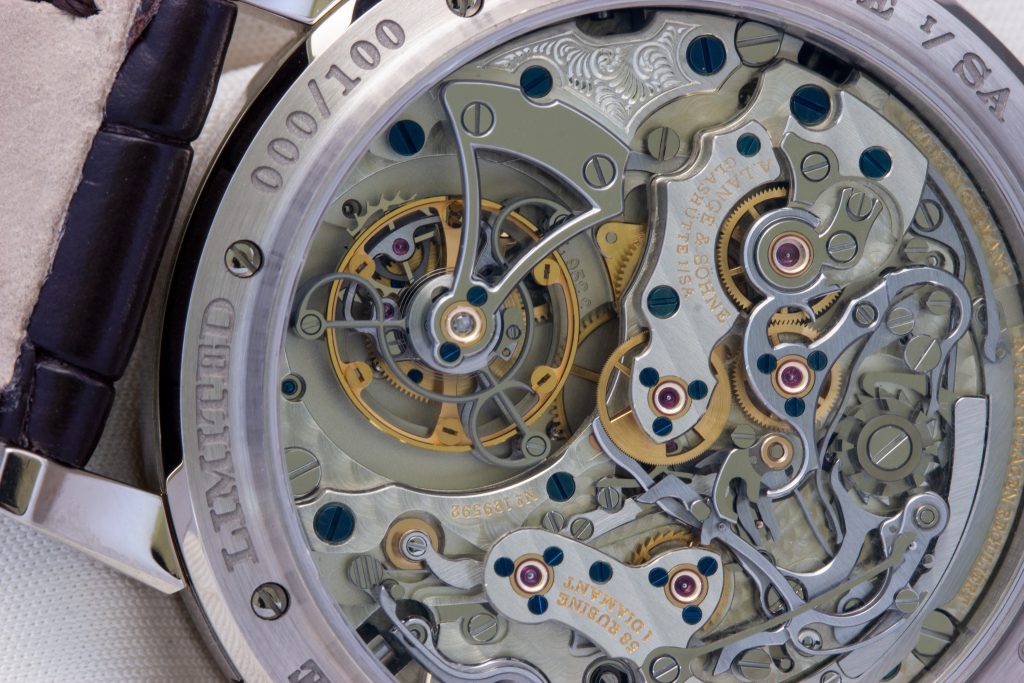 The tourbillon and the flyback chronograph mechanisms are on show at the top of the movement, with the perpetual calendar and moonphase gearing being hidden beneath (they aren’t usually much to look at, anyway). The tourbillon, which takes up most of the upper half of the display back, is suspended from a skeletonised cock which has been given a black polish to both protect the surface and give the movement more pizazz under the light. You can’t see it clearly, but a small arresting arm reaches out when the crown is pulled so that the entire movement stops to make setting more accurate. Various other components have also been given this treatment including screw heads, parts for the chronograph and the top of the column wheel. 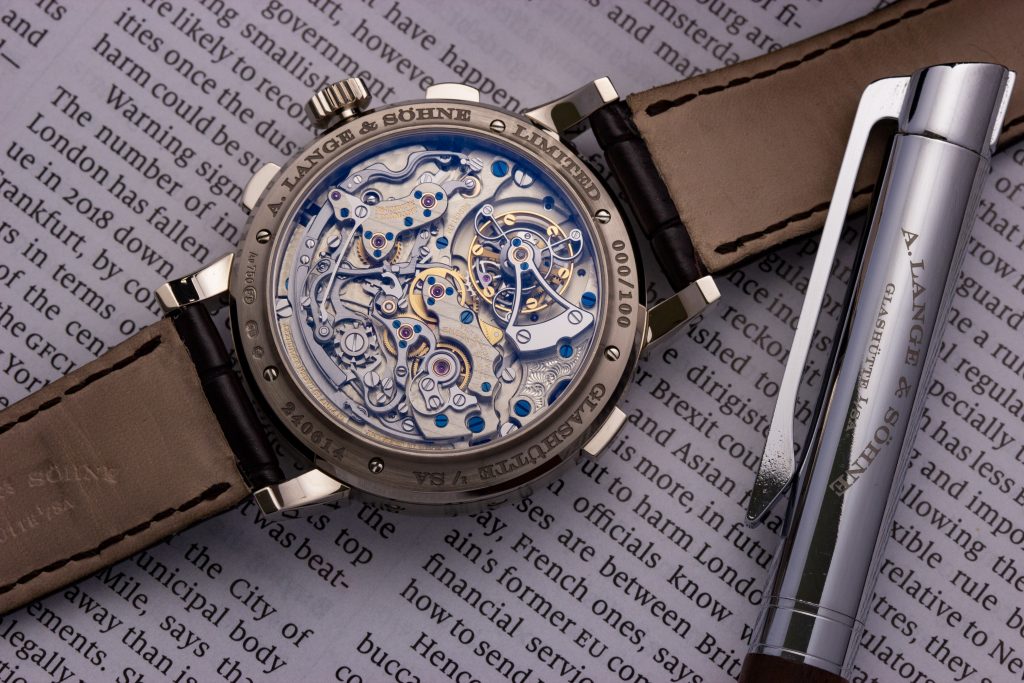 The principal draw to this movement’s architecture is not just the finishing but the ability to see the components of the chronograph interact with one another. Depressing the start/stop pusher returns a smooth feel to the person using it, and they can see the different levers interacting with one another and the column wheel inside the caseback. Pressing the reset pusher triggers even more levers to pull everything back into its original starting position with the same smoothness and grace as the start/stop pusher. You can just about see the pushers themselves through the caseback, as the movement has a small cutaway in the side of the plate to give a view. 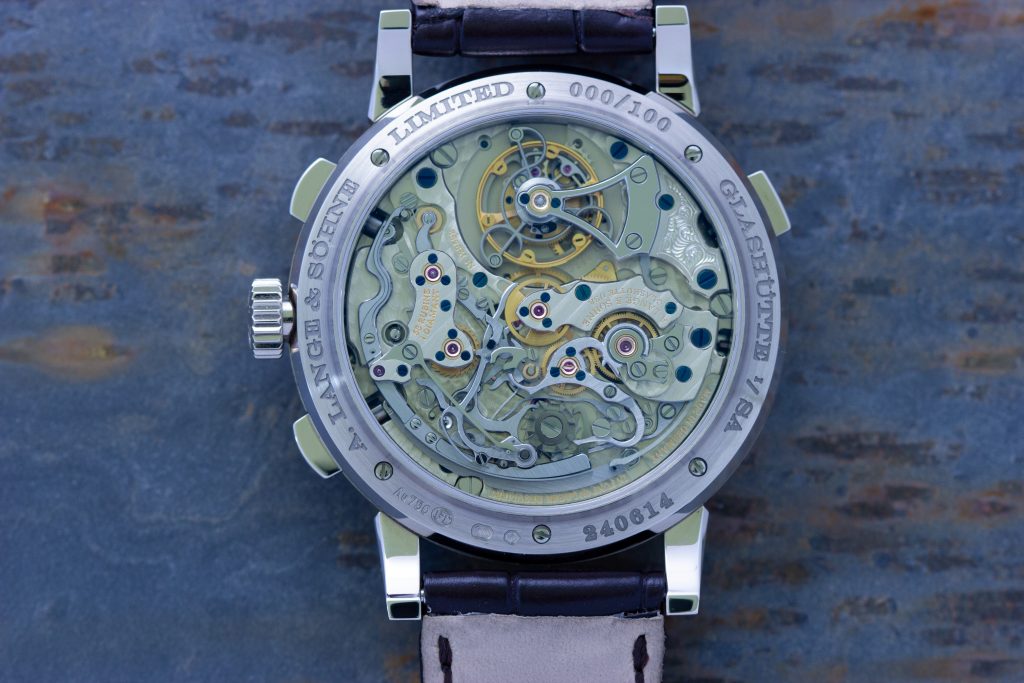 The jagged column wheel ensures there isn’t any judder coming from the seconds hand when the chronograph is activated, each component of the chronograph mechanism has an excellent hand finish to it which provides contrast to other parts and creates a harmonic view. The inclusion of heat blued screws and polished gold chatons increases the visual appeal.

This watch isn’t all show either, despite its fantastic level of finishing. The chronograph displays time with an accuracy of one-fifth of a second, which corresponds to the beat rate of the balance wheel inside the tourbillon (2.5Hz, the first time in a Lange tourbillon watch). The movement also features a power reserve which was missing from the pedestrian non-tourbillon Datograph, okay, maybe that was a bit harsh. It has a diamond endstone in the tourbillon though, which is pretty rare. 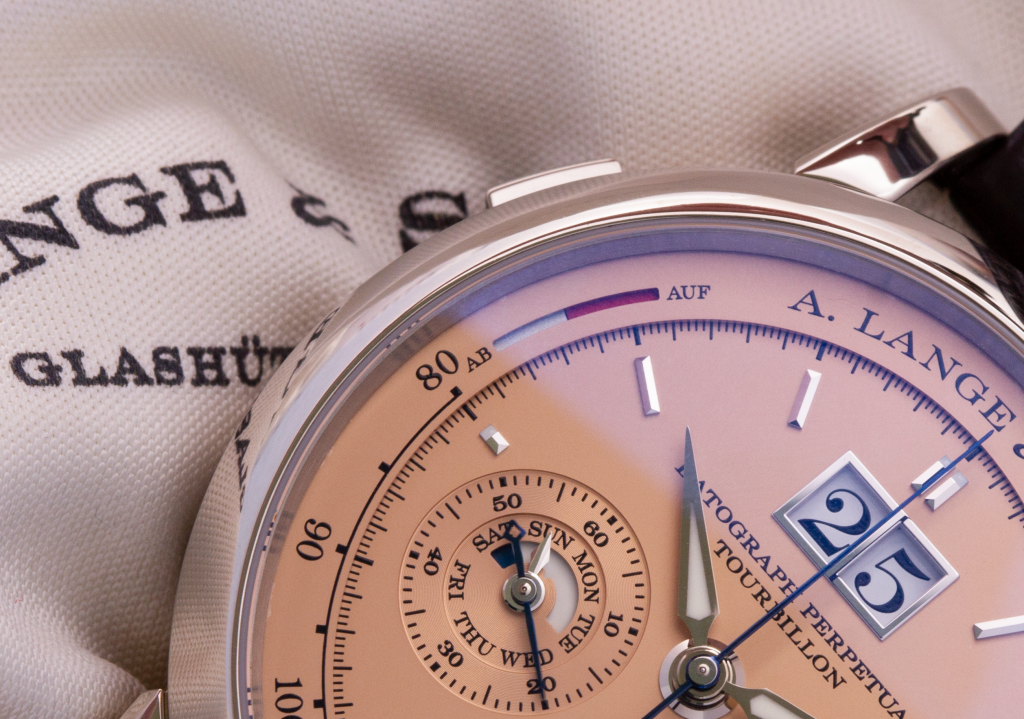 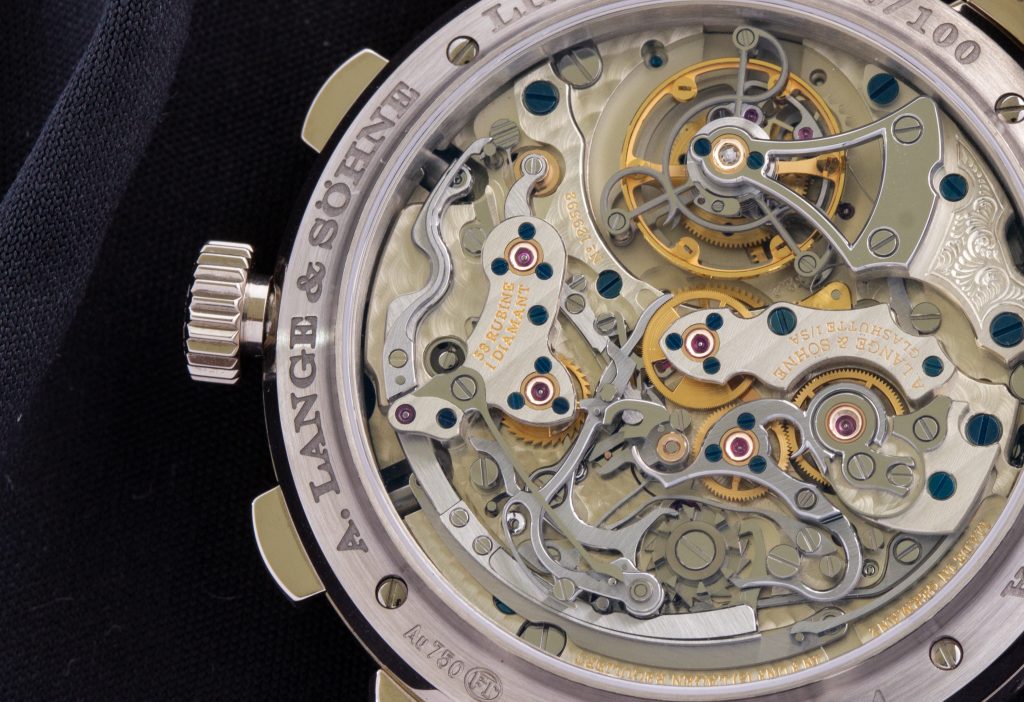 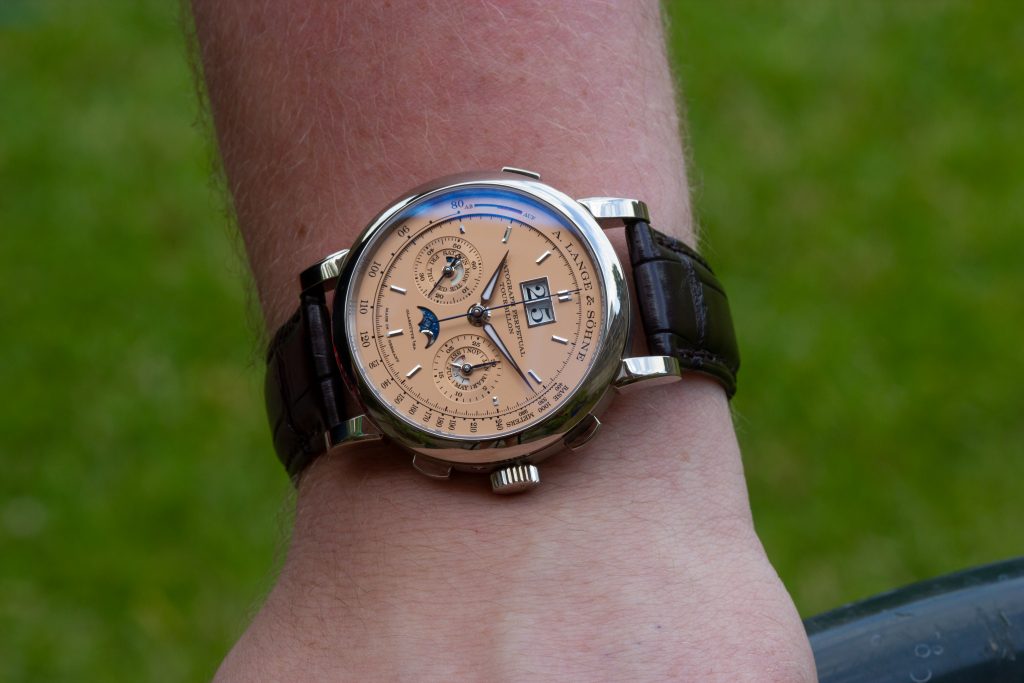 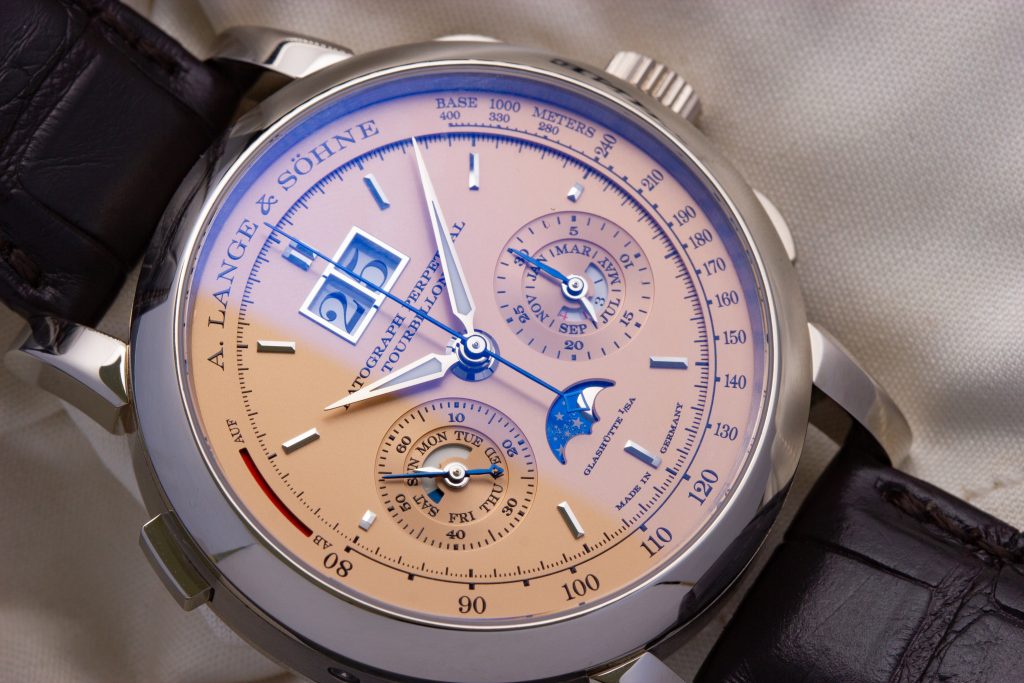 The power reserve is displayed on the edge of the dial using a red and white bar, which is new for this line. It is 50 hours in total. The Datograph Up/Down has the power reserve on a small hand in the middle, but in this case, a moonphase is in the way. Also, the calibre L952.2 has a protective device which deactivates the pusher for the Outsize Date when the crown is in its normal position. You may know that A. Lange & Söhne drew inspiration from the clock in the Semperoper, the opera hall in Dresden, for its Outsize Date, any watches which have this have a pusher to control the date independently. In this case, advancing the date also advances the perpetual calendar, but the watch still has some small push-pieces on the sides of the case should you need to re-synchronise all the displays. I had to do it once during my two weeks, and it was no bother at all. Just like the chronograph pushers, the date one can also be glimpsed through the caseback; its cutaway is right next to the beautifully engraved plate connected to the tourbillon bridge. Because the bridge is skeletonised, there wasn’t space to put the traditional engraving there, so it’s been relocated to the side for this watch. 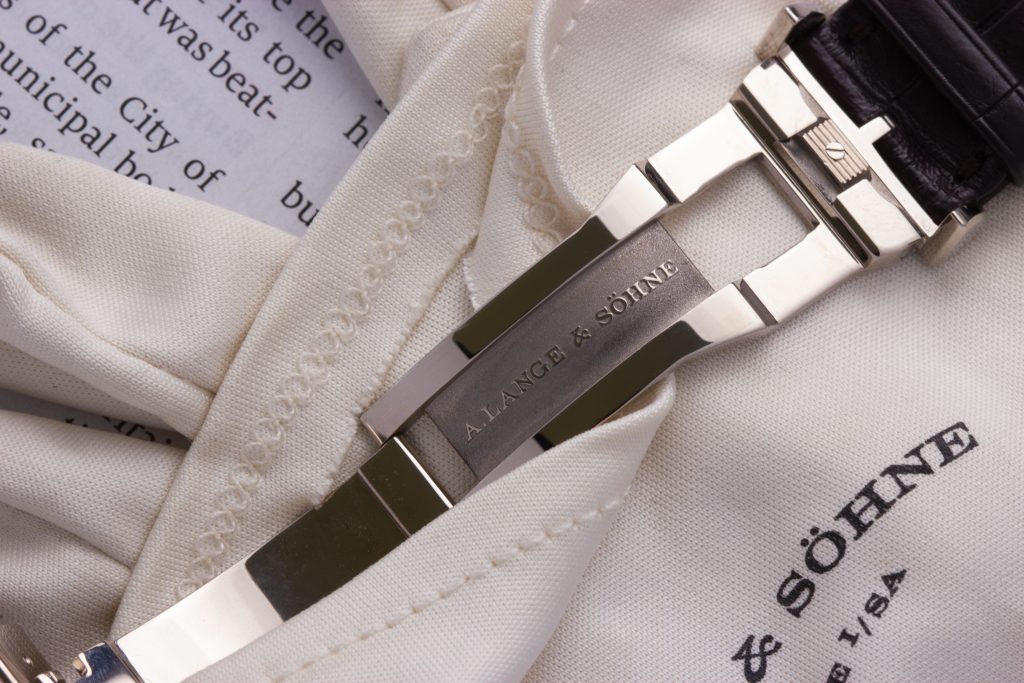 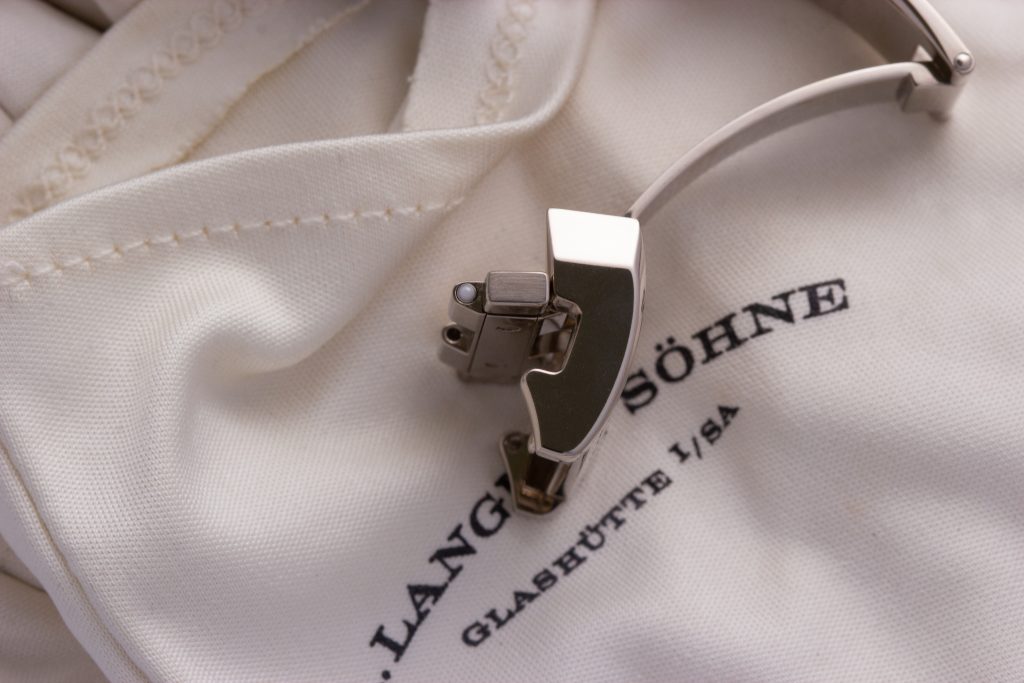 The folding clasp opens to allow the leather strap to slide through, before closing with a pin to size the strap to the wearer’s wrist and hold the watch secure

One other thing I should give a mention to is the intelligent design of the folding clasp. To size and resize the strap, the clasp itself folds into two allowing you to slide the strap through as necessary, before closing it and locking it into place. I should mention as well that possibly due to continual wear by the press and so forth that the twin pusher clasp didn’t always lock in on the first click and had to be done again, but when you have one of these watches you’re bound to be patient. 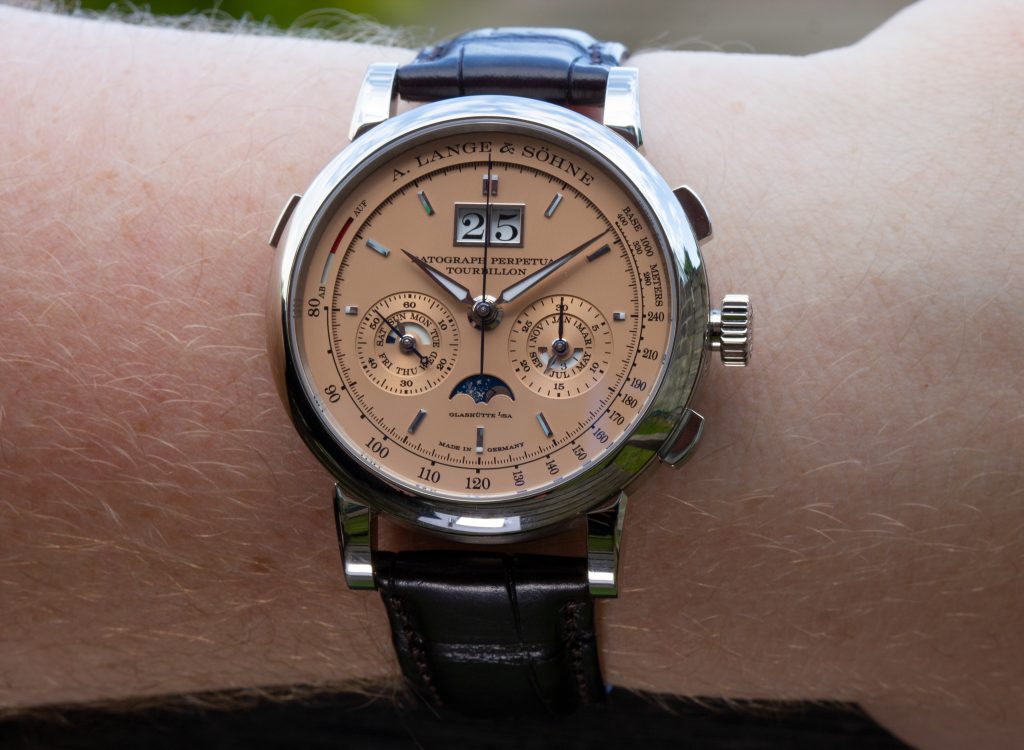 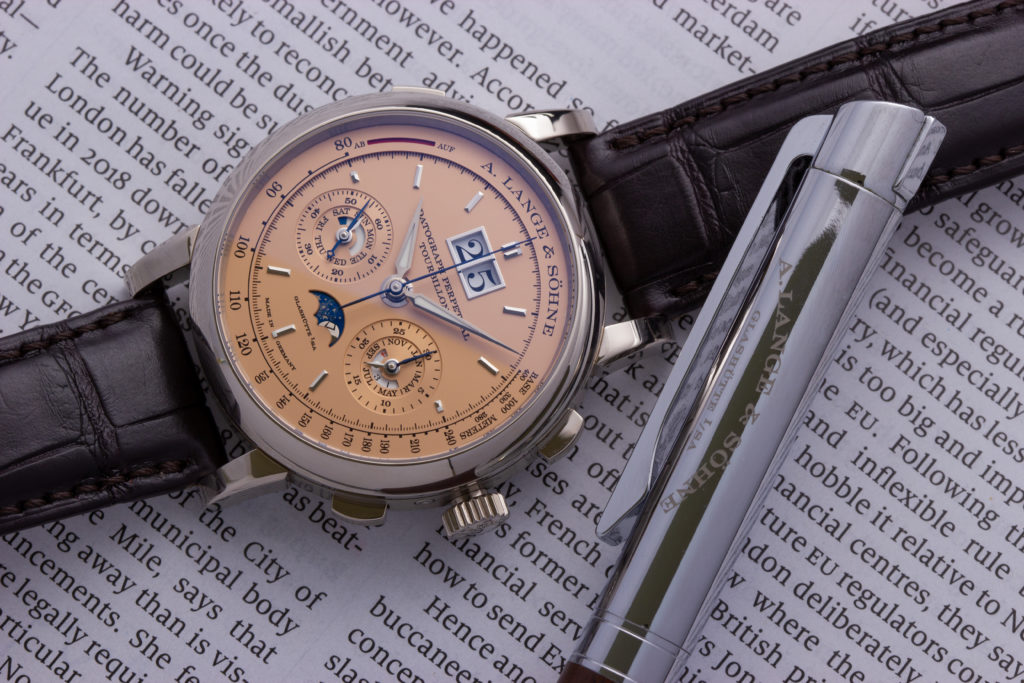 The overall experience of this watch was very positive indeed, I mean, why wouldn’t it be? When someone lends you €285,000 worth of A.Lange & Söhne, it’s bound to be a positive experience. Further still, this watch is limited in production like the black dial platinum cased version released a couple of years ago. It’s limited to just 100 units, well, 101 if you count this press piece. The watch remains totally approachable, though, there’s no severe and dour air around it, you can wear it and feel like a person who’s better because they’ve been able to experience the joys that the tangible components of the Datograph provide. To think that someone had to make and assemble all 729 individual components, check the fit, disassemble them all for finishing and then rebuild the entire watch once more and check it all works is even more amazing.