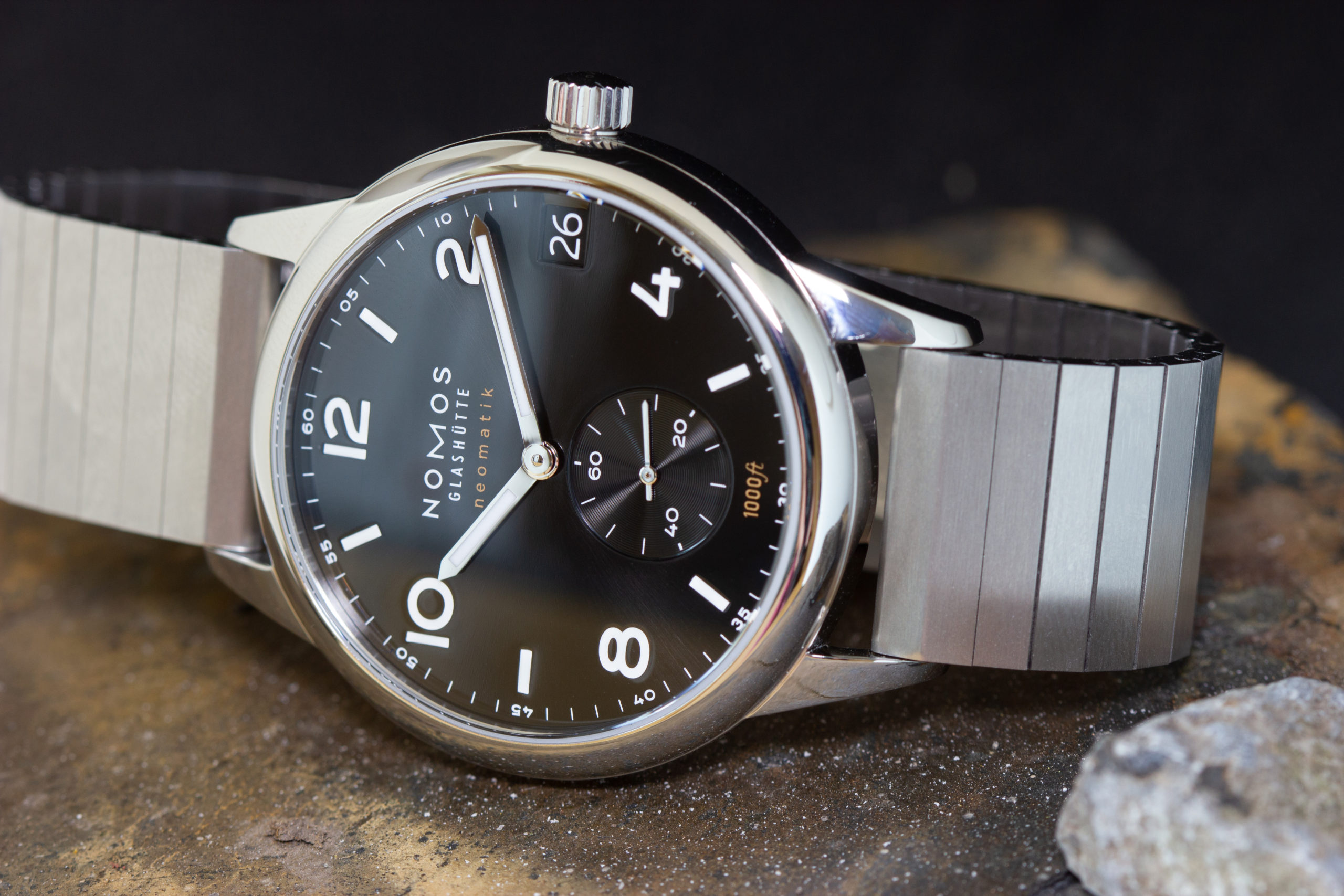 A Fortnight ReviewArticles
·May 7, 2019·0 Comments

One of the brands that have come a long way in a relatively short amount of time is Nomos. This company, founded in Glashütte, Saxony, is known for making very high-quality wristwatches that don’t break the bank while still providing the luxuries and design that comes with a more expensive watch. One of the key themes of the company’s entire collection is the Bauhaus design language, which is hugely minimalist in every detail, with nothing left to chance or out of place.

This style has proven to be very popular with customers who want something attractive that spans the regions of formal and casual at the same time. With high-quality leather straps accompanying their watches, Nomos has made a name for itself as the go-to midrange manufacturer. Up until now, the company has never made a watch with a metal bracelet before. Sure, you could fit an aftermarket one on there, Nomos design allows for quick and easy changing of the straps thanks to their quick-change system, but that’s not the same. Back in March Nomos showed off a new collection of watches featuring their first ever metal bracelet, I got to test drive one for two weeks to see how it was. 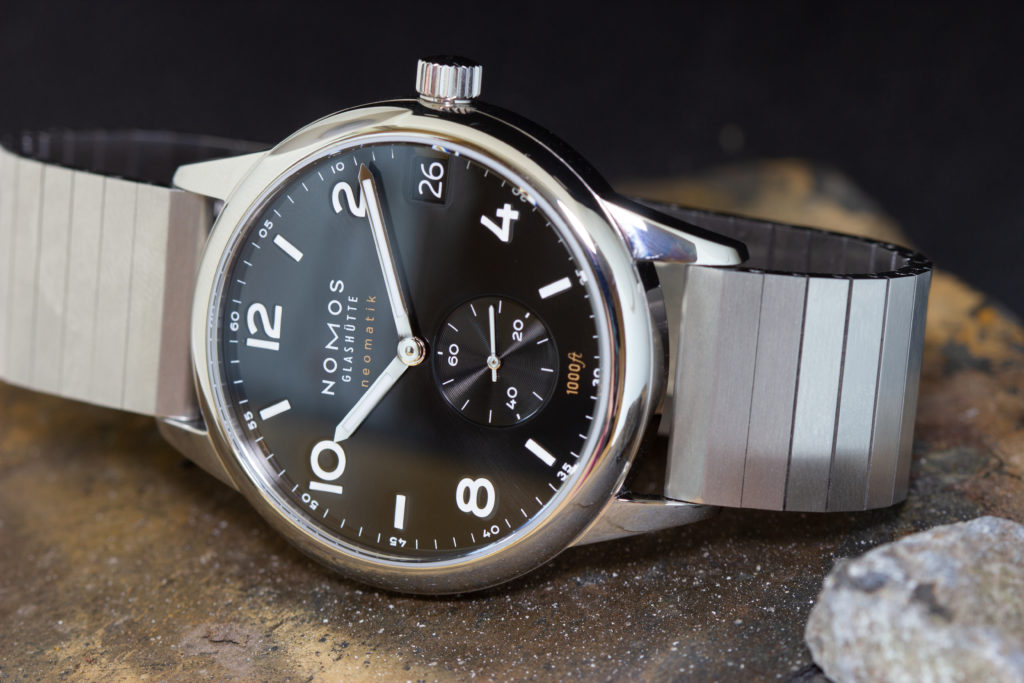 So, let’s get straight to the business of the new bracelet. It is a smart looking piece which has a few tricks up its sleeve. Assuming you haven’t purchased it from a physical shop, the bracelet should arrive attached to the watch but not connected at the clasp, leaving you to size it yourself. I had a little bit of fuss with it at first. The spring bar uses the same quick adjust system all the way through, so you need to squeeze both sides and slide it to the hole in the clasp that suits you best. It’s a bit fiddly compared to, say, the Glidelock system, but it keeps both cost and size down. The clasp itself is minimal in design, very thin with a polished foldover which is bound to attract scratches. Also, it’s upside down, or at least it seems to fold over upside down, I’m not quite sure of the intention of this But it’s no harder to operate and looks no different.

The bracelet is surprisingly sturdy. Featuring single flat links instead of the multilink design seen on nearly every other watch ever, this one stands out. When laid down flat all the links neatly come together as you can see in the photos. They are polished on the sides and held together with screws as well. My one slight gripe with this watch’s bracelet is that because the bracelet isn’t a multilink design, it tends to grab and pull on arm hairs. It’s not as bad as you’d think, only the odd occasion, but when you come from a watch that doesn’t tug on hairs at all, it’s noticeable. Some friends I showed it to also didn’t understand why the bracelet doesn’t connect to the case. I quite like it that way, and it makes it more like the leather straps which also don’t reach all the way in-between the lugs. It makes cleaning it up easier too. 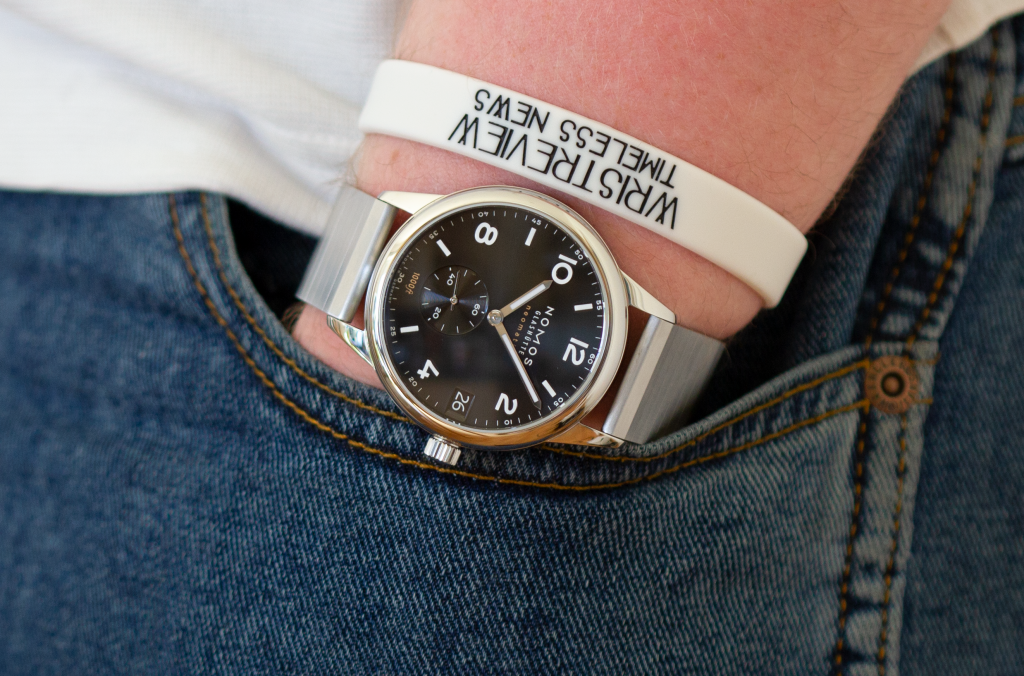 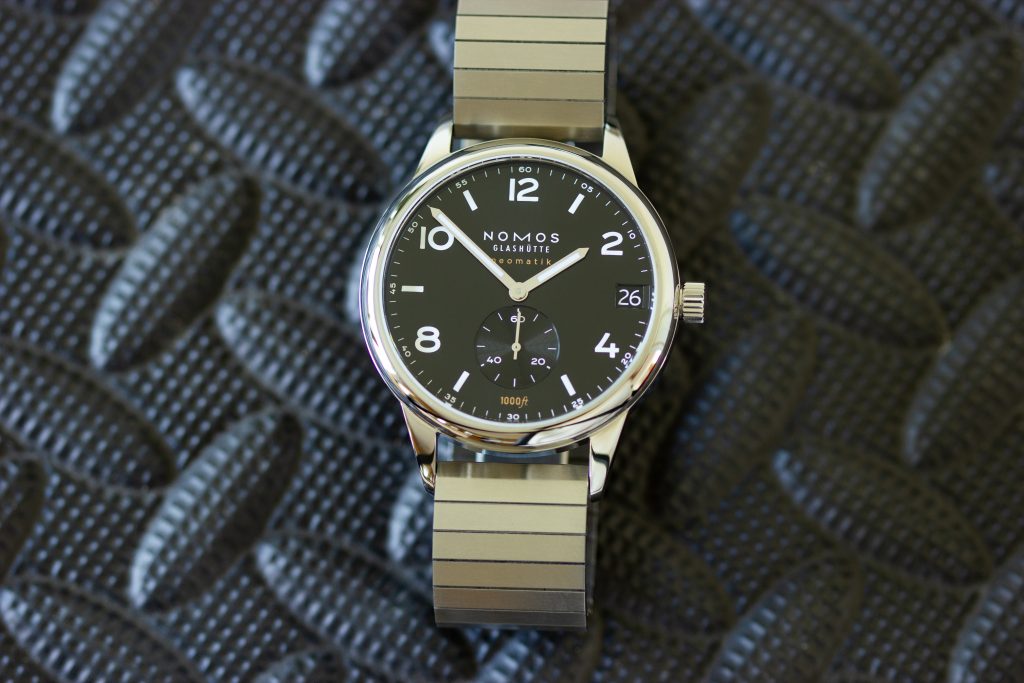 The case of the Club Sport Neomatik is polished to perfection, it glitters in all the right ways, but contrasts with the brushing of the bracelet links well.   The polished bezel is small and makes way for a big dial which would seem to have some matte painting going on, but is actually reflective. The printing of the text on the dial is clean as well. However, turning the watch at an angle reveals the subtle cleverness of the design here. To keep the costs down, and make production easier, most manufacturers print markers onto the dial and leave it at that. However, with the Nomos, the dial seems to mould around the markers, in the same way that water melds around a leaf floating on its surface. The bright paint, SuperLumiNova by the way, also rises to give a 3D appearance. Subtle but classy. 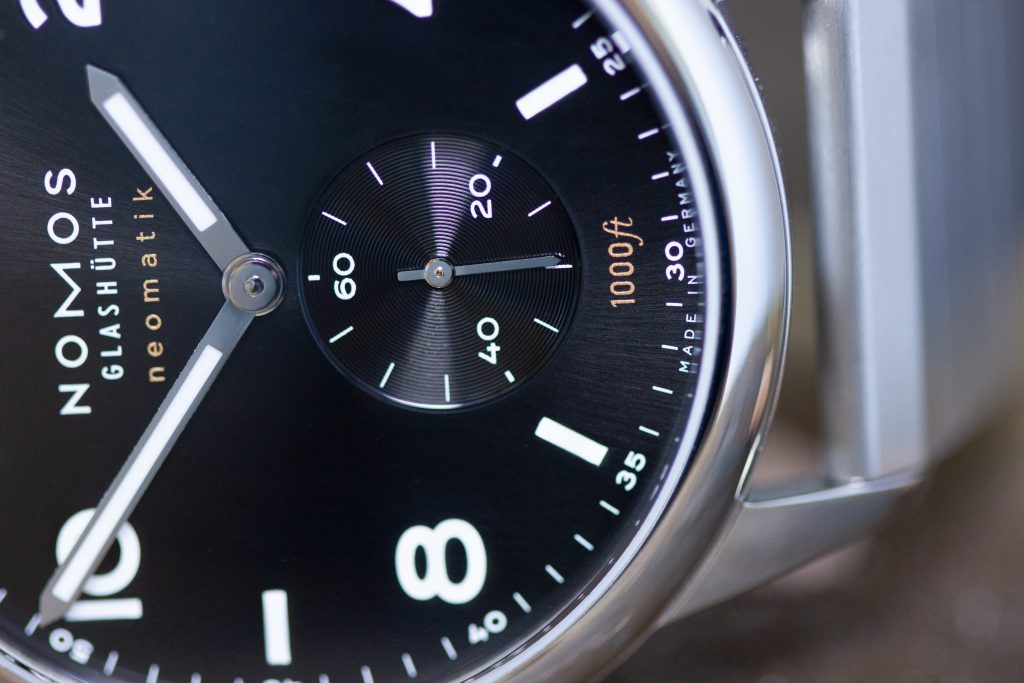 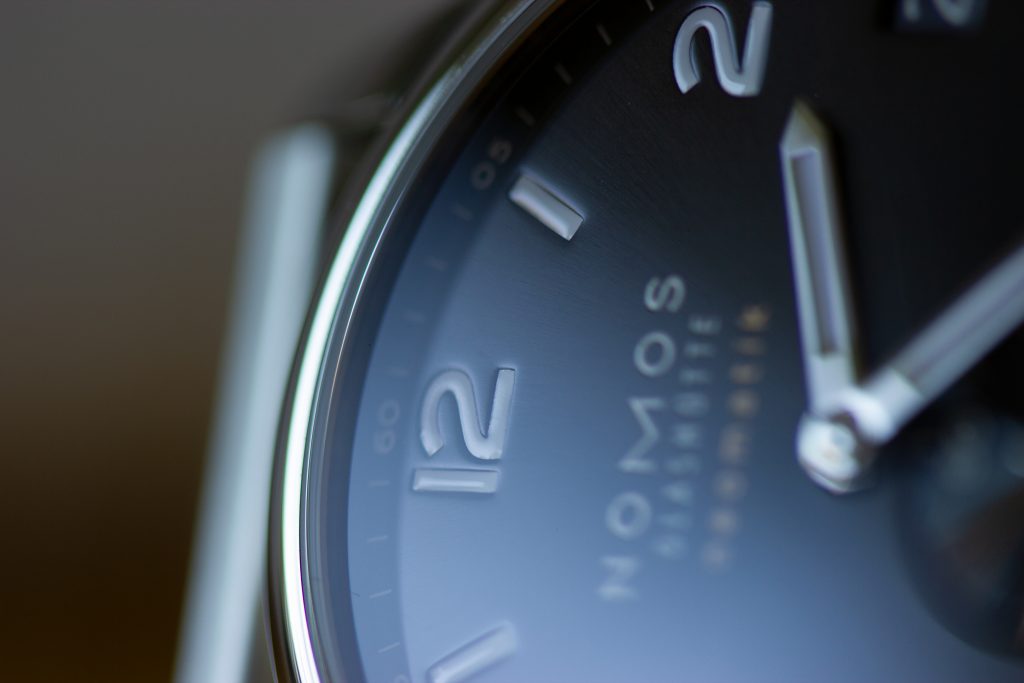 The dial is also well laid out with a sub seconds hand at 6 O’clock and the date at the usual 3 O’clock. The indicators are large and very legible from a distance — the white lume contrasting with the deep black well. At night, the lume is also a bright white and lasts quite a long time. It’s not up there with the brightness of diving watches, but it doesn’t need to be. Despite this watch having a water resistance of 300m, it has no diving bezel or functions. I expect this to be more of a posterity thing, or maybe even a hint at the future. Although this is meant to be a lifestyle watch worn by a younger person, 100m would have sufficed, so it’s nice to see Nomos going the extra mile here.

Let’s now take a closer look at the rear of the watch where the in-house made calibre DUW 6101 sits proudly on display. Exceptionally thin at 3.2mm, this movement features a spartan appearance, but it’s the details that make it shine. It doesn’t have complicated polishing, but the stripes that it does have are excellently finished with no irregularities. The automatic winding rotor has been skeletonised as well so that you can appreciate the finishing of the plate further. Small touches of gold here and there add contrast, along with the tempered blue screws. I’d also add a point which isn’t often seen nor discussed in publications such as this. As most people expect, a small amount of post-production editing goes into the photos here on WristReview, and we fully support it. Sometimes watch movements can build up small dust particles or bits of dirt here and there on the movements, but I would say this is the cleanest movement I’ve ever photographed that wasn’t from a super low production independent watchmaker. 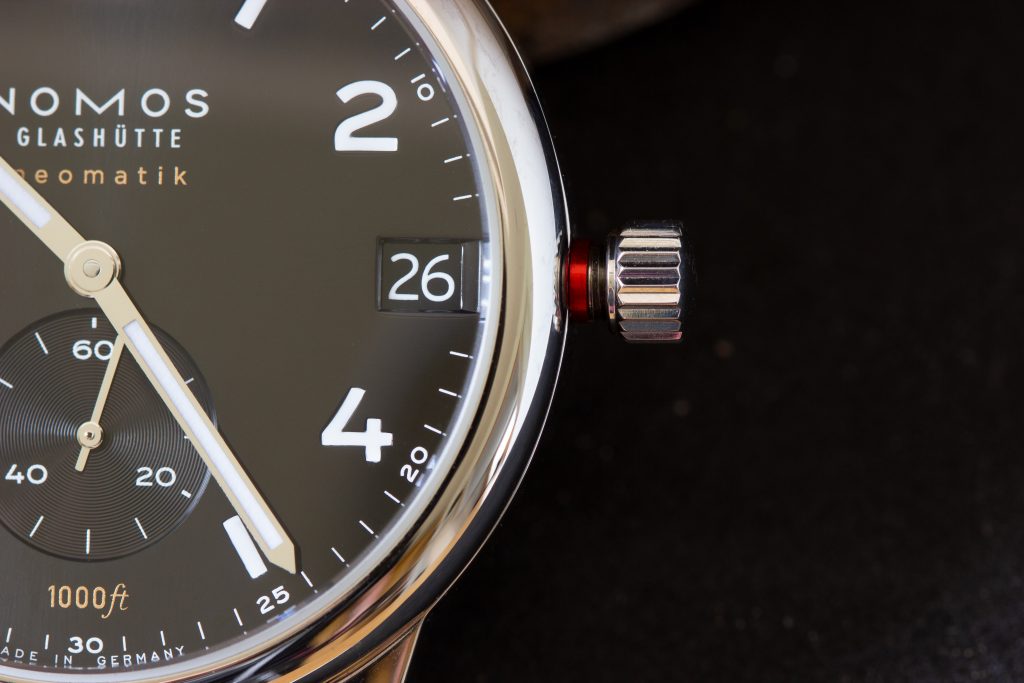 The DUW 6101 itself features intelligent German design, too. You may have noticed that on this watch the date is set on the very edge of the dial. Nearly every other watch with a date ring features the window closer to the middle, due to the date module being added on top of the existing movement. Here, the date has been integrated, so the ring is now placed around the movement rather than on top. It’s also a quickset date, unscrewing and pulling the crown out to the second position allows the wearer to change it forwards or backwards with ease and the window in which you cannot touch it while it changes the date is only 90 minutes. Consider that most watches require anywhere up to 6 hours to be safe. The cogwheels also received a new sliding gear to control them, which took eleven trials to perfect. There’s also a red danger ring to warn the owner that the crown is pulled out and therefore not water resistant. 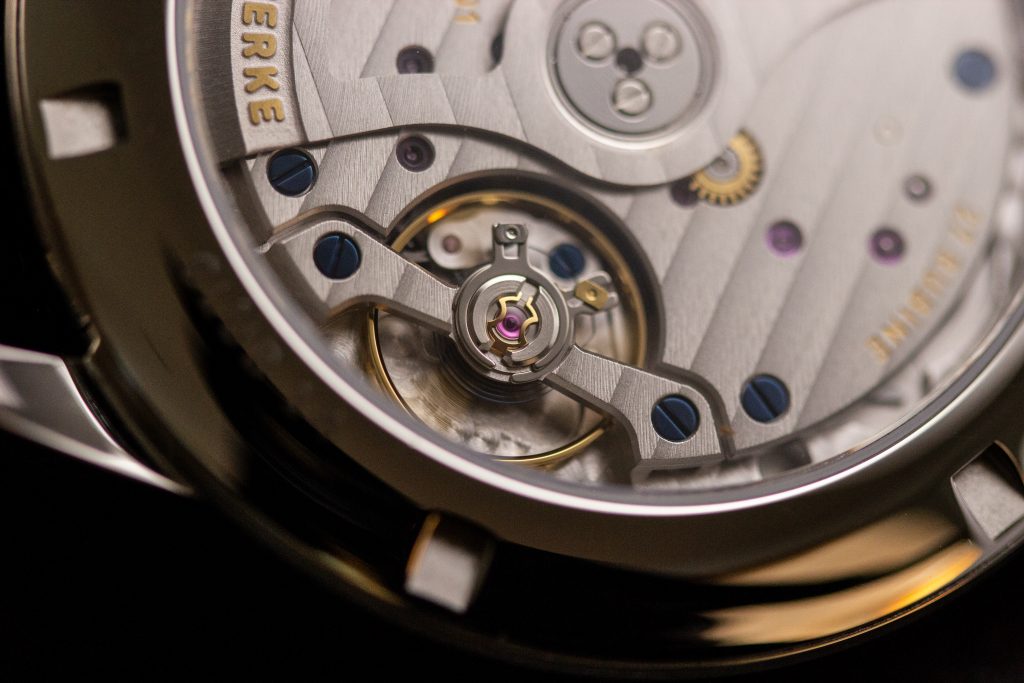 The balance wheel features Nomos’ proprietary escapement technology featuring the Nomos Swing System. A tempered blue balance spring denotes the work that’s gone into it and ensures a more precise watch. The power reserve is 42 hours on the DUW 6101 movement, which is about the industry average. Don’t forget, it’s a thin watch, adding more barrels for more power adds to the thickness. 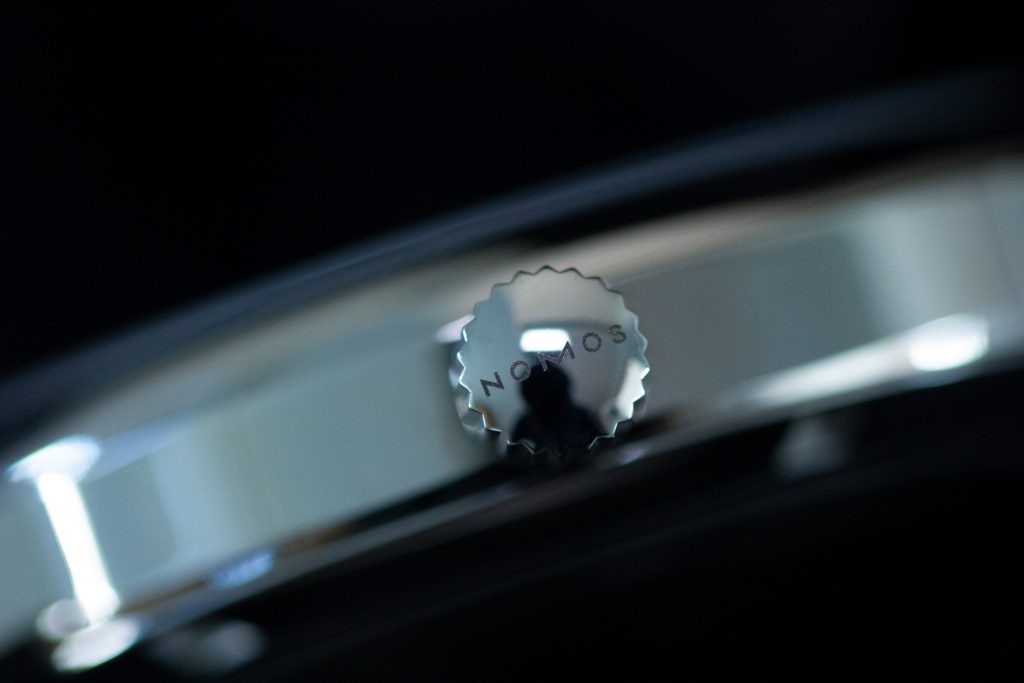 What isn’t as intelligent is the crown itself. When screwed shut it sits somewhere between 0.5mm and 1mm away from the case of the watch. That’s it’s closed position, it won’t go any further, and it doesn’t feature any shoulders either to protect the delicate stem from damage, whereas the Tangente models do have at least some protection. However, I prefer the appearance of the Club Sport anyway. It’s more youthful and exciting. 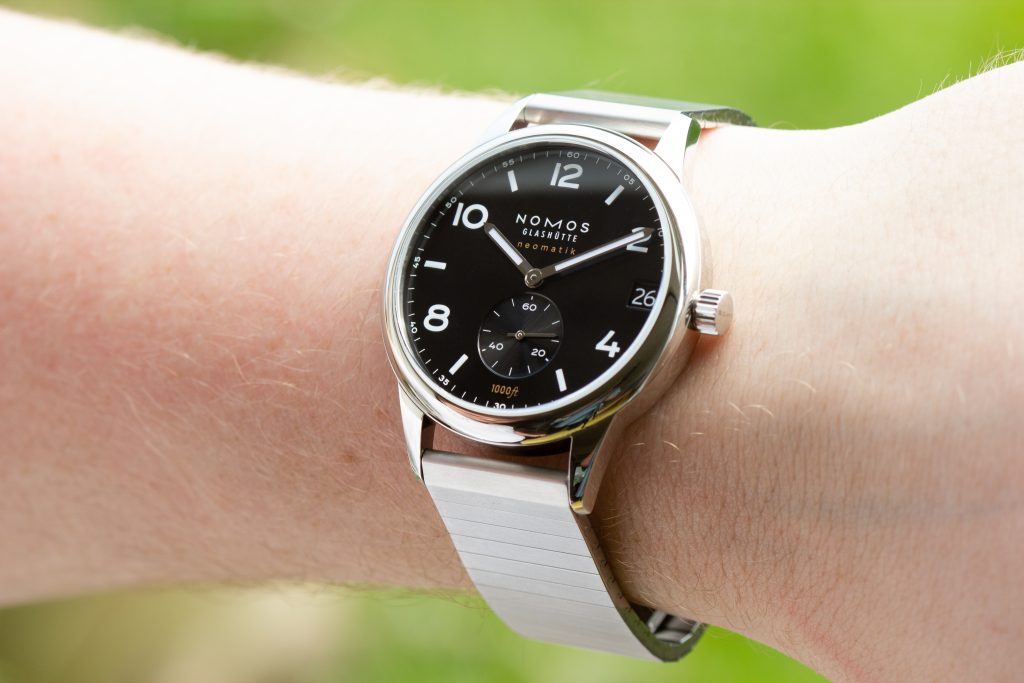 Despite the watch’s svelte proportions of 42mm x 10.2mm, it’s still a hefty watch. I’ve brought the point across before that I don’t appreciate a watch that is very light (unless it is a dedicated ultra-thin timepiece, of course). I like to know tangibly where that money is going, and the Nomos doesn’t disappoint. It feels very sturdy, and with the addition of a quickset date and a quick change bracelet, this watch makes a serious point for a collector looking for something flexible that could work as a daily, provided that scratches don’t upset. I think it would be best accompanied by one or two other watches but would fit into a collection nicely. 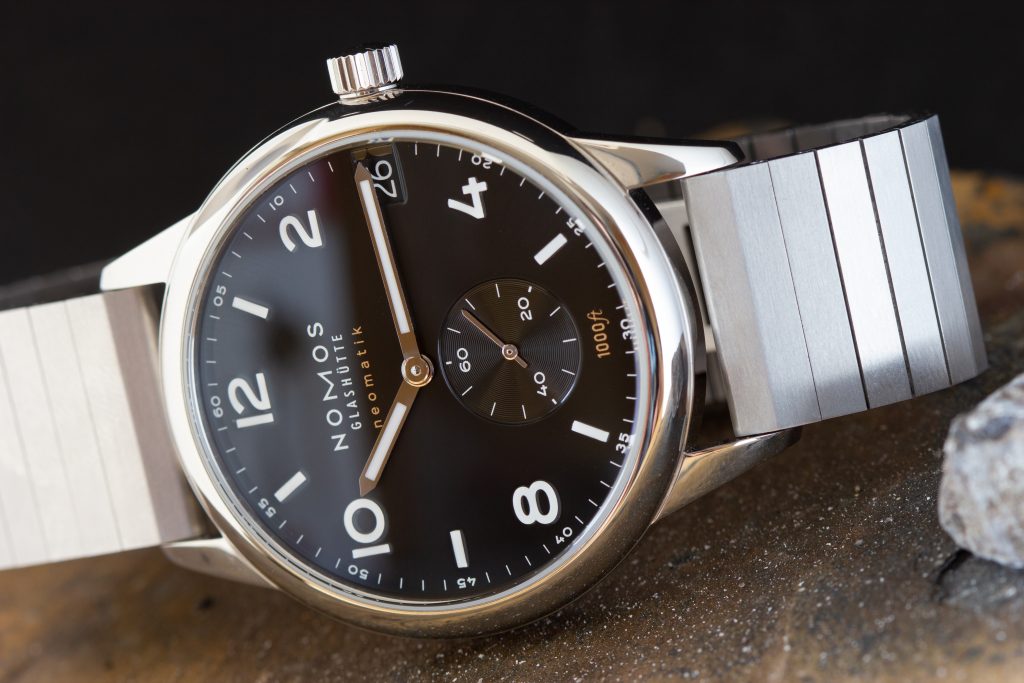 The retail price of the Club Sport Neomatik is $4060, or £3220 which is hardly anything considering the amount of smart design you’re getting. Nomos could get away with charging way more than they are for this timepiece, my two weeks spent with it confirmed this to me, although I’d figured that out on day one.