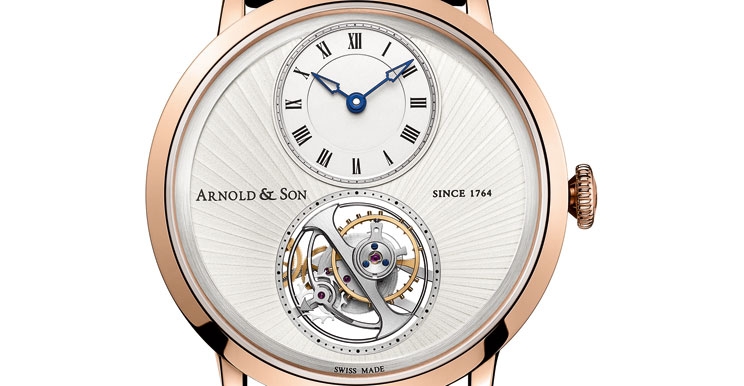 In a move that boldly underscores its watchmaking prowess and defines its inventive British heritage, Arnold & Son unveils a record-breaking watch: the world’s thinnest tourbillon watch on the market today – with the final cased watch measuring a mere 8.34 mm thick. The new UTTE (referencing the Ultra-Thin Tourbillon Escapement) is equipped with the A&S8200 movement that measures just 2.97 mm thick. This new calibre A&S8200 was developed, designed and manufactured entirely in house at the brand’s La Chaux-de-Fonds workshops. This superbly engineered wristwatch is part of the brand’s Instrument Collection that combines instrument precision with classical styling.

The UTTE is a masterful demonstration of elegant design and superb technical prowess. The A&S8200 movement – and the ultimate UTTE watch – is the result of several years of research and development, and boasts important features and functions, including a double barrel that makes it possible to offer 80 hours of power reserve. In fact, when the brand embarked on the creation of an additional tourbillon, Arnold & Son’s team of watchmakers and engineers determined that the end result should possess unique features that would set it apart in the watch world. Utilizing the most cutting-edge technology, Arnold & Son pushed the creative envelop to achieve this goal – thus developing a record-setting timepiece. The UTTE is the thinnest tourbillon wristwatch on the market today – with the case thickness at 8.34 mm and a movement that is just 2.97 mm thick. Additionally, while the movement diameter is 32 mm, the tourbillon cage is a massive 14 mm in diameter – thus occupying almost half of the movement space for impressive clarity. To ensure a long power reserve of at least 80 hours, the brand implemented two barrels to offer more constant force and unprecedented power reserve for an ultra-thin tourbillon.

Finally, to add further dramatic beauty to this already impressive watch, Arnold & Son created a totally spherical tourbillon cage – one devoid of any flat surfaces – for a magnificent three-dimensional aesthetic effect. In fact, the flying tourbillon cage is not inset into the calibre, but instead rises out of the movement, through the dial, and achieves the same height as the hour and minute hands. With an eye toward every detail, and the desire for harmonious appeal, the watchmakers removed all visible screws so the spherical tourbillon cage appears beautifully balanced. The only visible screws are on the regulator. In typical Arnold & Son style, the exquisite movement is crafted in nickel-silver, and all components are hand chamfered, polished and decorated.

The UTTE is part of Arnold & Son’s Instrument Collection, wherein timepieces are easily identified by their dial design, with off-center position of the hours and minutes to allow for the display of other complications without one overlapping the other. The new UTTE follows this design aesthetic, with the spherical tourbillon occupying the lower portion of the dial. The alluring, timeless lines of the stepped case, which tapers from the top to the bottom, imbue this watch with an austere elegance. Two distinct models, with superbly different dial designs, each with a 42 mm diameter case – the first such size in the Instrument Collection.

UTTE is created in either 18-carat red gold or palladium (a rare alloy in the watch world). Each movement is finished in a color to complement the case color, and each features a different Côtes de Genève pattern. The 18-carat red gold case watch houses the movement treated in rhodium and decorated with Côtes de Genève rayonnantes. The tourbillon bridge of the 18-carat red gold UTTE is entirely hand-engraved by Arnold & Son’s master engraver. The palladium UTTE version houses a grey NAC treated movement decorated with a straight Côtes de Genève pattern for a bold, contemporary appeal. Because of the amount of time it takes Arnold & Son’s vigilant watchmakers to build each one individually by hand, production is limited to just 50 timepieces of each of the two models.

The visionary UTTE is the perfect embodiment of a tourbillon escapement – a Haute Horlogerie complication that played a crucial role in Arnold & Son’s History. An exceptional watchmaker, John Arnold was an active participant in one of the most extraordinary partnerships in the world of innovative horology. Indeed, both he and Abraham-Louis Breguet worked closely together, sharing both their knowledge and passion. Evidence of their partnership is A.-L. Breguet’s first-ever tourbillon escapement mounted in John Arnold’s No.11 movement – a watch that can be found today in London’s British Museum.

© The Trustees of the British Museum