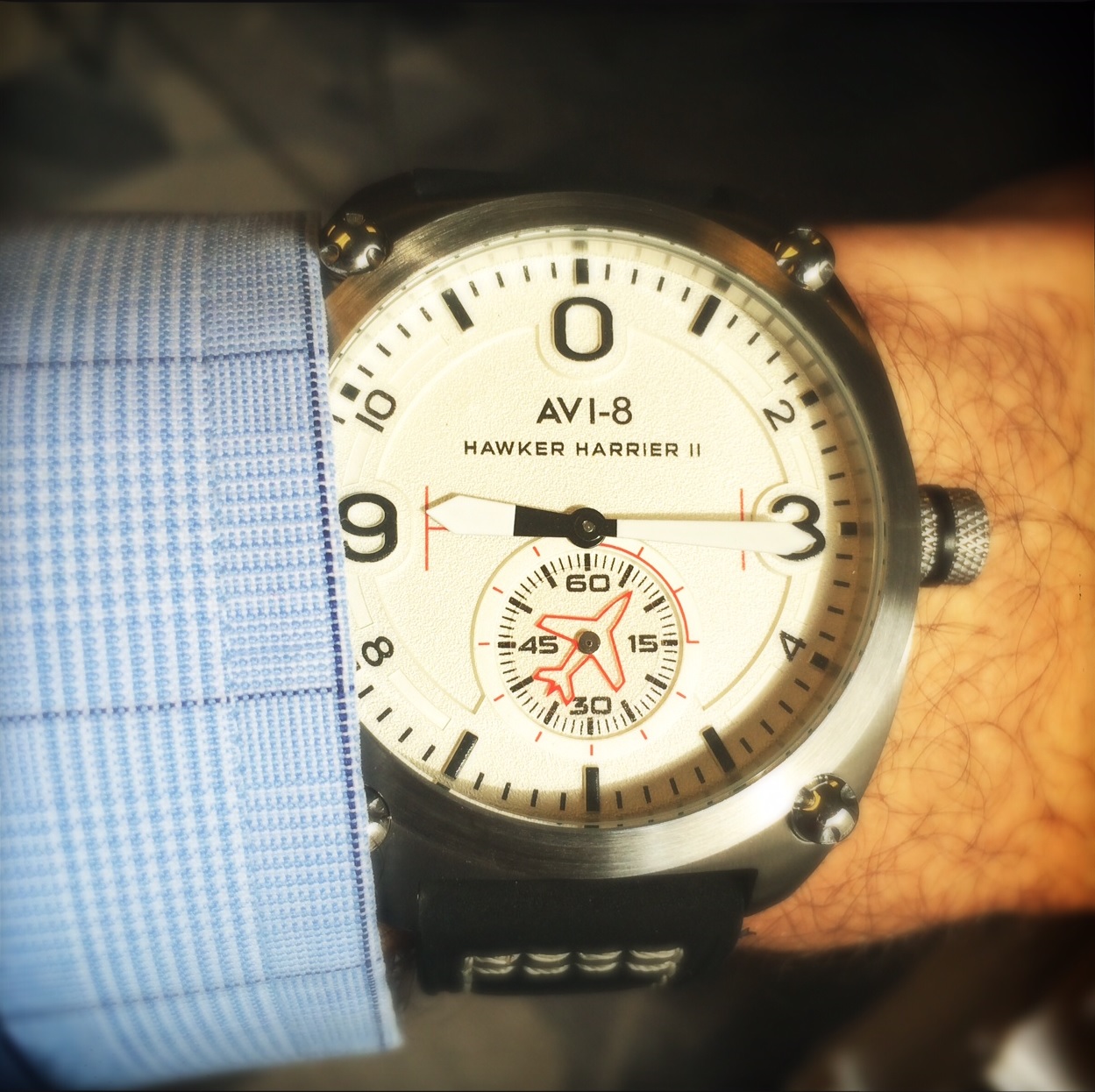 By The Time Bum

Love it or hate it, everyone knows the aircraft instrument watch. These oversized timepieces draw inspiration from cockpit gauges, with utilitarian dials and frames that mimic mounting brackets and fasteners. It is a relatively new design in the watch world. Perhaps the earliest of this type was a limited edition altimeter style watch made by Trintec Industries in 1990, but it was Bell & Ross who made the instrument watch a style icon with the BR-01 in 2005. Since then, dozens of watchmakers have produced variations on this theme. The challenge, of course, is to develop a unique design in what is a simple and nearly universally recognized style. Enter the Avi-8 Hawker Harrier II, 4026 series.

Avi-8 watches are all inspired by aviation, so an instrument watch was not only an expected addition to the line, it was almost essential. The 4026 ticks all of the boxes for this design. Broad case? Check. Exposed fasteners? Check. Instrument style hands and dial? Check, and check. That part is easy, but the devil is in the details. 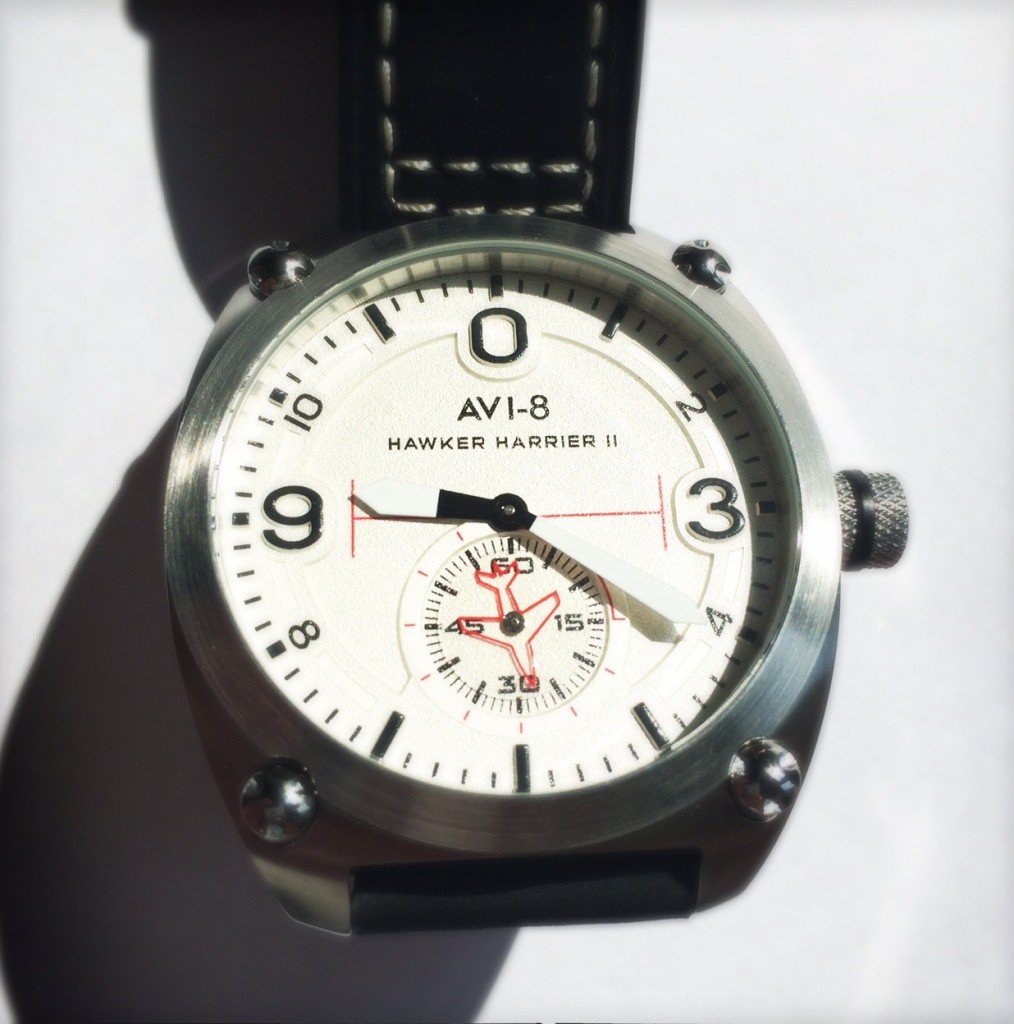 The 4026’s case does not attempt to mirror a cockpit instrument in the same manner as Bell & Ross. Rather, it uses stylized cockpit cues suggest its inspiration. The stainless steel case strays from the hard angles of most instrument watches, and takes a softer line with a barrel shape measuring 46mm wide, and 52mm lug-to-lug. The arc of the curved sides is repeated in profile, an angle that also reveals the polished sides of the case and bezel, the upper surfaces if which are brushed. Four domed fasteners interrupt the bezel, cutting into its perimeter. Their polished heads have an odd 3-hole pattern, but they are purely decorative. The polished case back is engraved with the image of its namesake, the Hawker Harrier Jump Jet. In true pilot watch tradition, it has a massive 6mm push-pull crown that is knurled and bisected with a black rubber collar. The rubber and texturing make it easy to grip, although I wonder about the necessity. Pilot’s watches generally have large crowns to facilitate their use with gloves, but this one strikes me as more form than function. It is topped off with a flat mineral crystal. Water resistance is 50 meters. 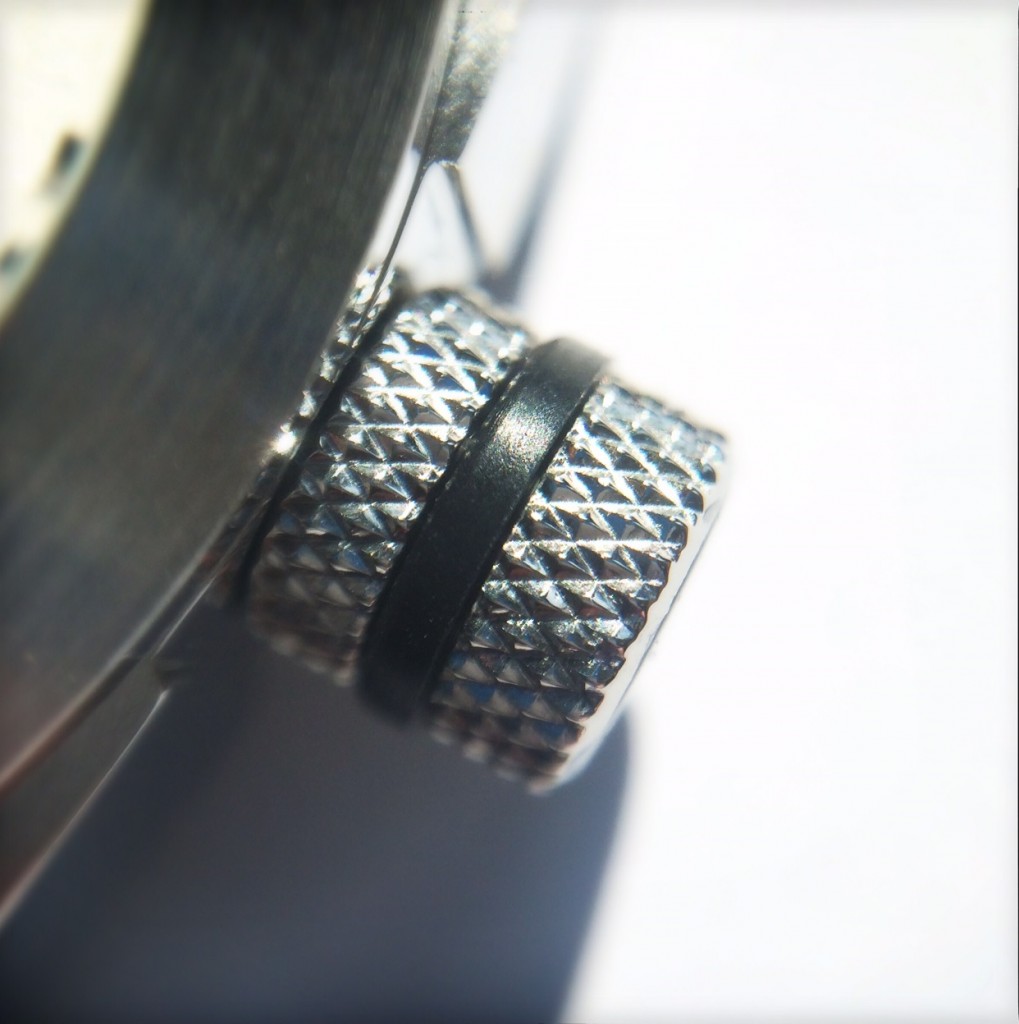 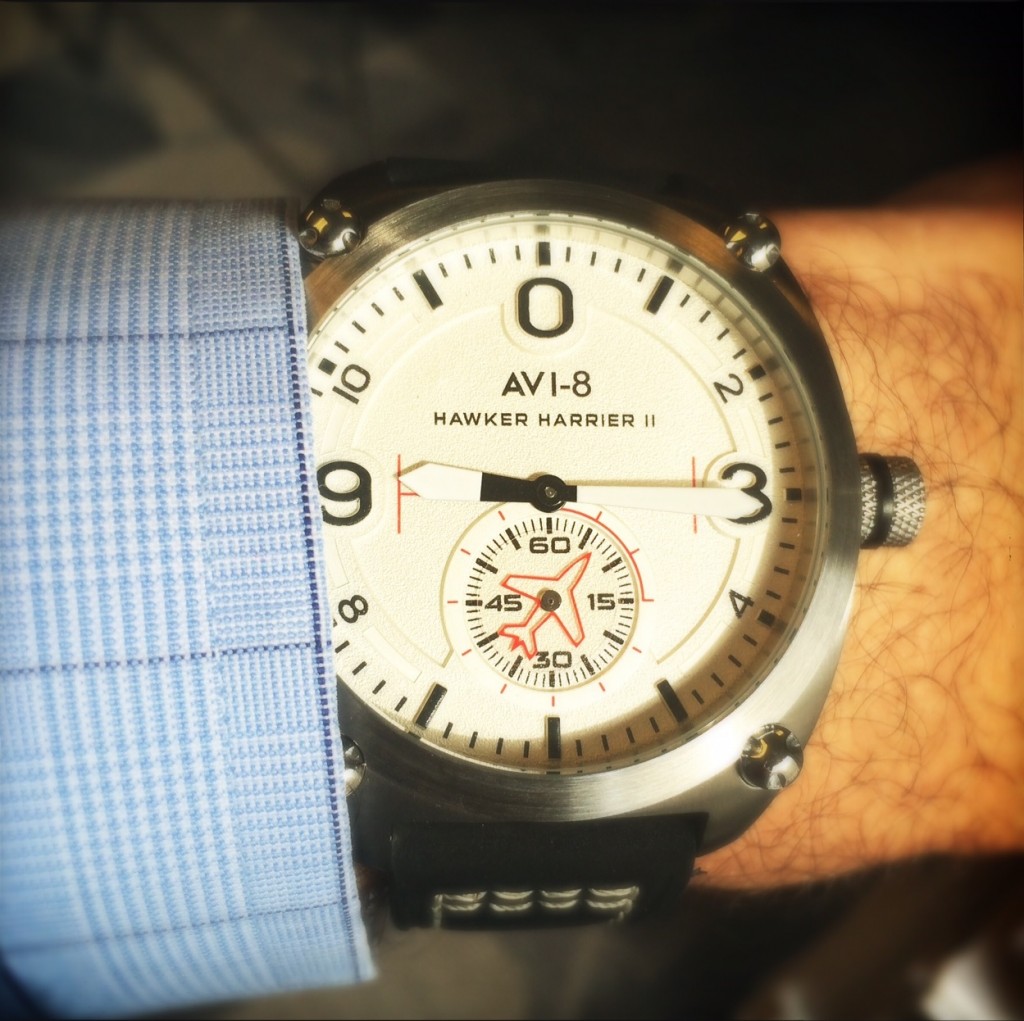 The slightly white dial is the most intriguing aspect of the watch. It has a rough texture, creating an almost pearlescent effect, and is bisected with a red “horizon” line. The numerals and seconds sub dial occupy a raised are that steps down the center of the dial. The numerals and indices are raised and printed with black lume, creating high contrast in daylight, and even some muted illumination at night. The layout is 0/3/9 with that big zero in the 12 o’clock position, but closer inspection reveals small numerals at 2/4/8/10, in proportionate size the stick markers used for the remaining hours. Seconds are displayed in a large sub dial that looks for all the world like an aircraft heading indicator. It occupies the full area from 6 o’clock to the center of the dial. Indices are black and red, and the hand itself is the red outline of a jet plane that fills the sub dial. It is a great detail: eye catching, creative, and just plain cool to look at. 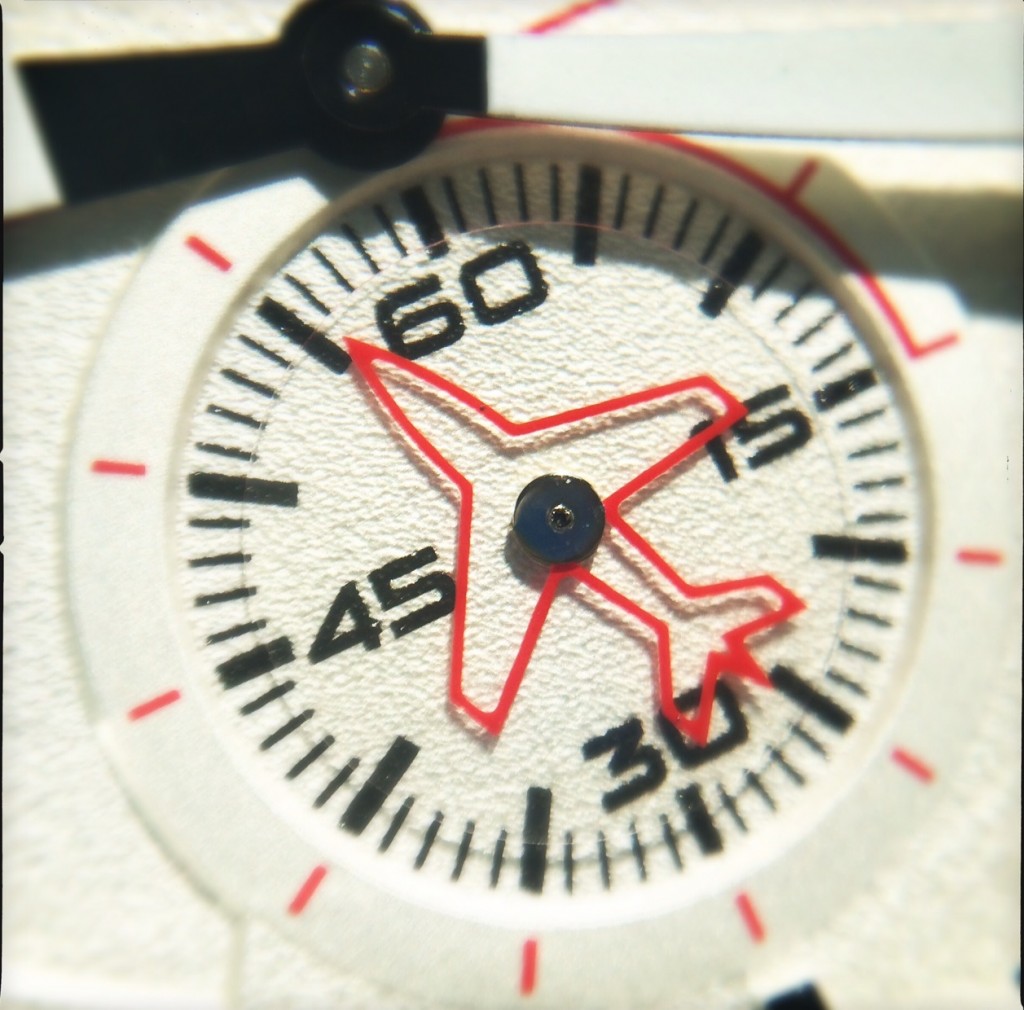 Sadly, the as the face exceeds expectations with its second hand, its minute and hour hands disappoint. They are the typically broad sword style you would expect, and bright white. At night, the white lume glows nicely, but in daylight, they are a much brighter white than the dial. The lack of contrast hinders daytime legibility, and their lighter tint makes the dial appear dingy.  If this bothers you as it did me, it is easily remedied by choosing a 4026 variant with a black, green, or ivory dial, all of which have better contrast.

The strap is thick matte black leather, 22mm wide with white stitching and an engraved buckle. It is pliable, comfortable, and perfectly in keeping with the watch’s aviation theme. It also had sufficient adjustment to fit my 6.5″ wrist. The 4026 gets points for fit and comfort, because even though my wrists are on the small side, the watch did not exceed its bounds. It wears large as a result of its shape, but that is true of all instrument watches. Indeed, some would say that is the whole point. Big as the watch may be, its 11.5mm thickness and curved lugs, allow it to slide under a standard shirt cuff. With modest water resistance, it is hardly a tool watch, but it is a fun casual piece, and the low profile makes it that much more versatile.

The movement is a Miyota 1L45 quartz. It will not set a watch nerd’s heart aflutter, but it is a reliable and accurate unit that will get the job done without fuss. The Avi-8 Hawker Harrier II is a fashion watch, and The Time Bum has nothing against them, provided you know what you are getting and you don’t pay too much. This is where the 4026 shines, because despite its $369 list price, Avi-8 sells it for only $110 on it’s Amazon store. For the money, you are getting a bold statement, with some clever details, in a surprisingly wearable package. For more info, please visit avi-8.co.uk 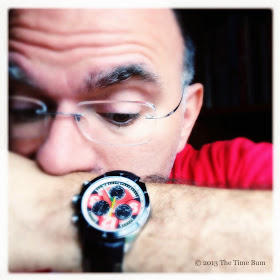 The Time Bum is an avid watch enthusiast and unrepentant cheapskate. His blog, thetimebum.com, focuses on watches in the affordable end of the spectrum, particularly those that sell for under $1,000 — as far under as possible. When not playing with watches or writing about them, he is a lawyer, husband and father who enjoys good food and old cars. Read his articles here.