Baselworld 2015: Omega Dark Side Of The Moon Watch Collection

You may remember a while ago Omega released the all black ceramic Dark Side of the Moon line for their Speedmaster Professional range. It was an automatic affair, powered by an in-house made co-axial chronograph movement with 2 subdials and a date window. Well now it’s back. 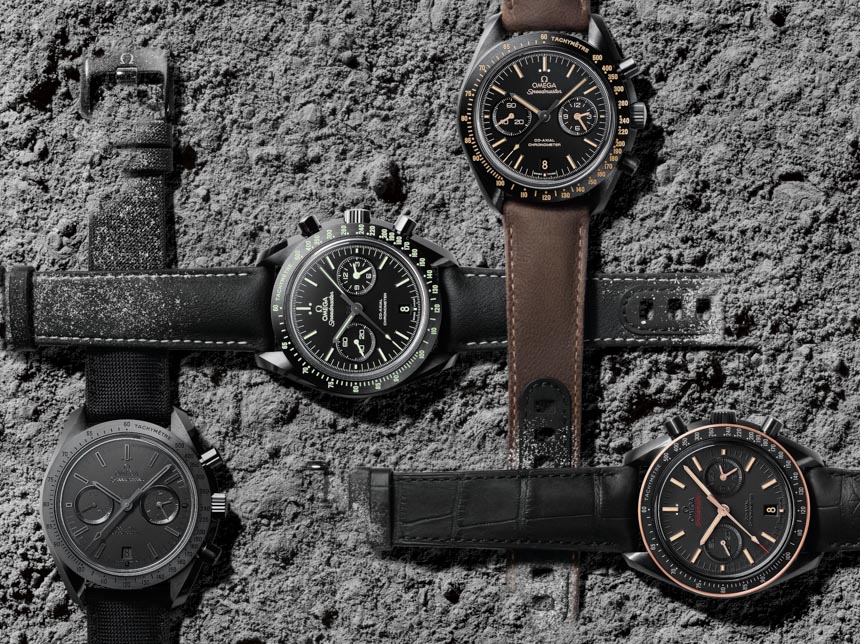 It’s returned and it’s providing a contrast to the also newly announced stark white Speedmaster. In fact it’s back, four times over, that’s because there’s now 4 colour variants to the Dark Side of the Moon instead of just black. They all run on Omega’s automatic 9300 co-axial calibre and all feature the seconds hand at 9 O’clock and the chronograph minutes and hours at 3 O’clock, meaning this is a 12 hour chronograph piece. 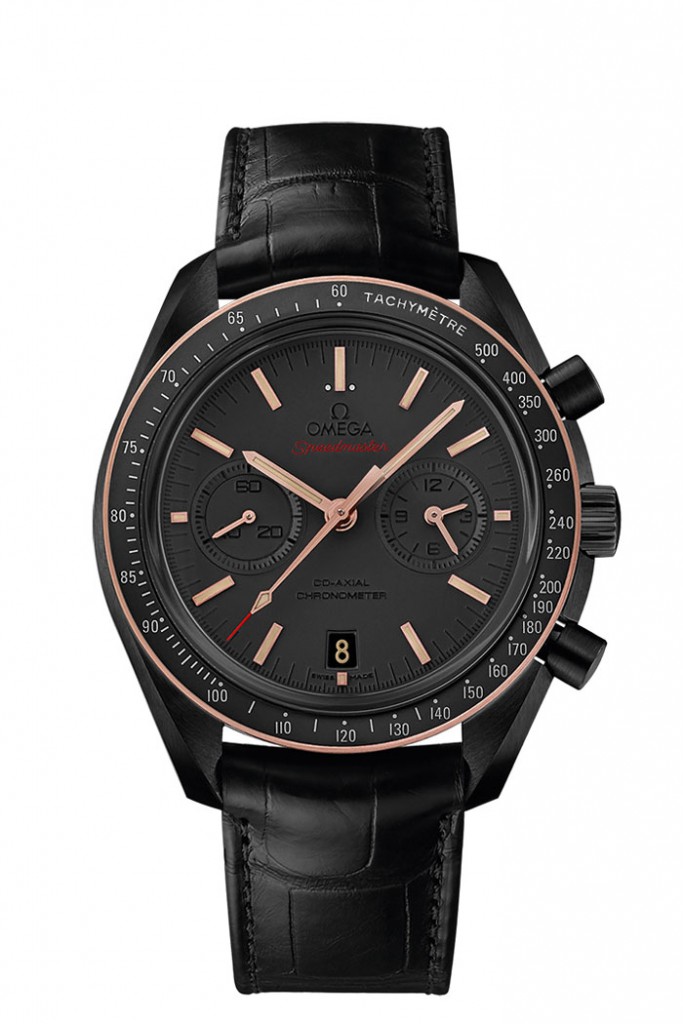 The first version of the new Dark Side of the Moon range is the Sedna Black version. This isn’t solid gold, but instead has Sedna gold indicators, hands and a ring around the edge of the bezel to make it stand out. Black and gold always work really well together especially on a watch because the black absorbs the light and contrasts excellently with the shiny (or in this case [terrible pun there] brushed) gold. There’s still the matte ceramic ring around the centre and back of the case and the tachymeter bezel is made of chromium nitride, which is also presented in a matte finish. There’s also a tiny drop of red on this watch, in the form of the red chronograph seconds hand and the ‘Speedmaster’ logo is also finished in red, just like on other Speedmaster and Seamaster models. 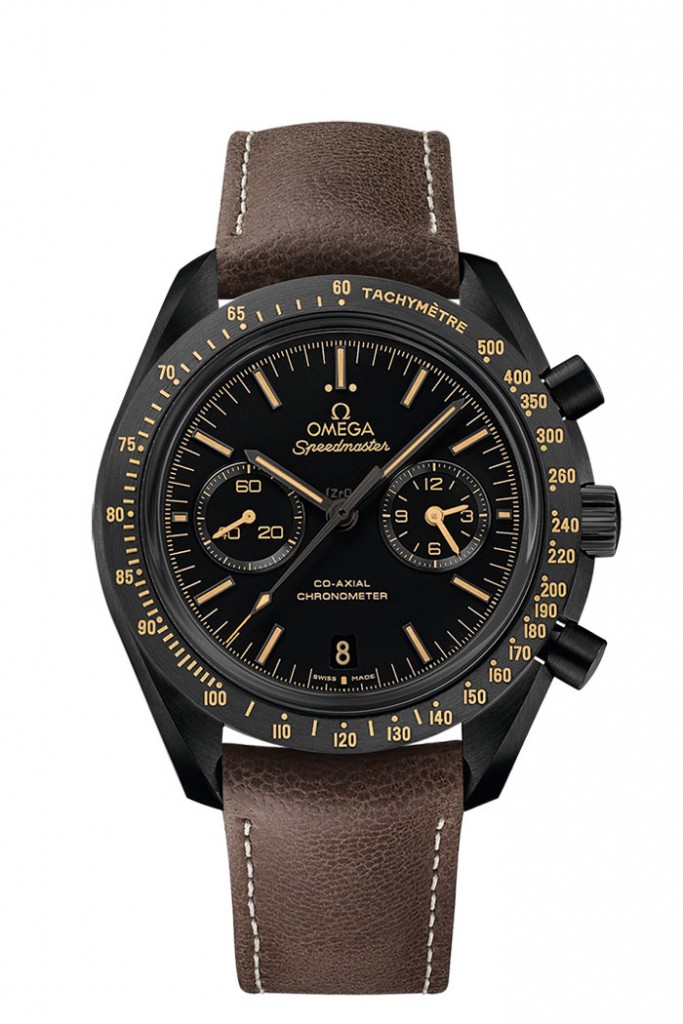 There’s also the vintage black version of the Dark Side of the Moon. You may remember last year when Omega introduced the Seamster Master Co-Axial watch which was a tribute to the original it too had an aged patina applied to the SuperLumiNova on the dial. In fact, Omega’s ’57 Broad Arrow watch that they brought back this year (read the article here) also had the PatinaNova, I’m coining that term, Omega. Again there’s a great colour contrast with the black of the watch and dial and the ‘aged’ orange look given to the watch. You’ll also find the PatinaNova on the bezel too to help timing in the dark. That’s practical. 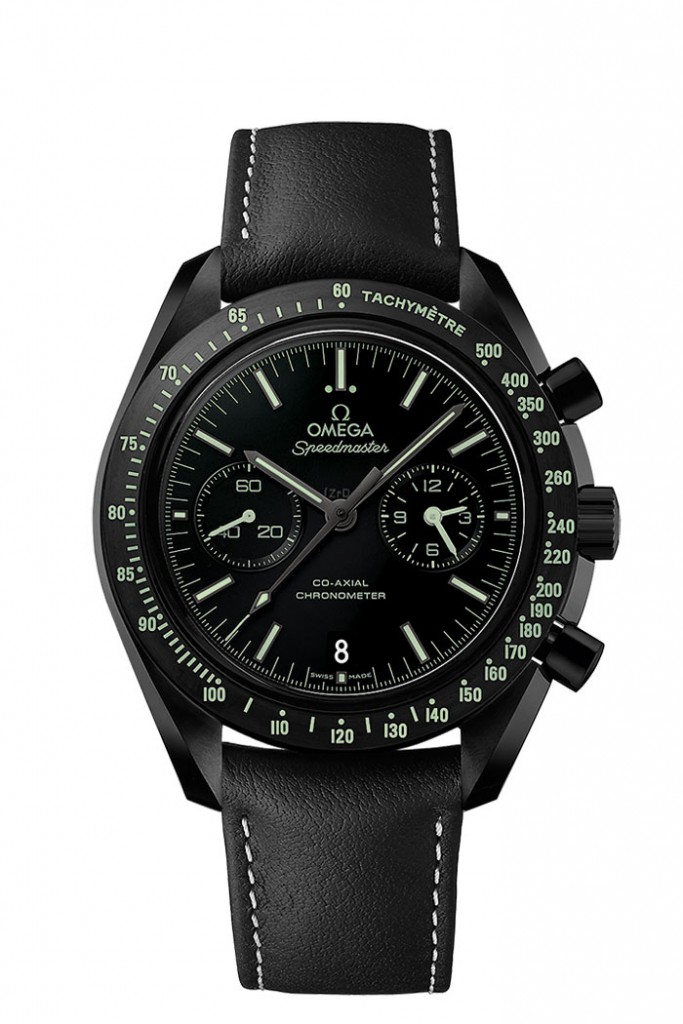 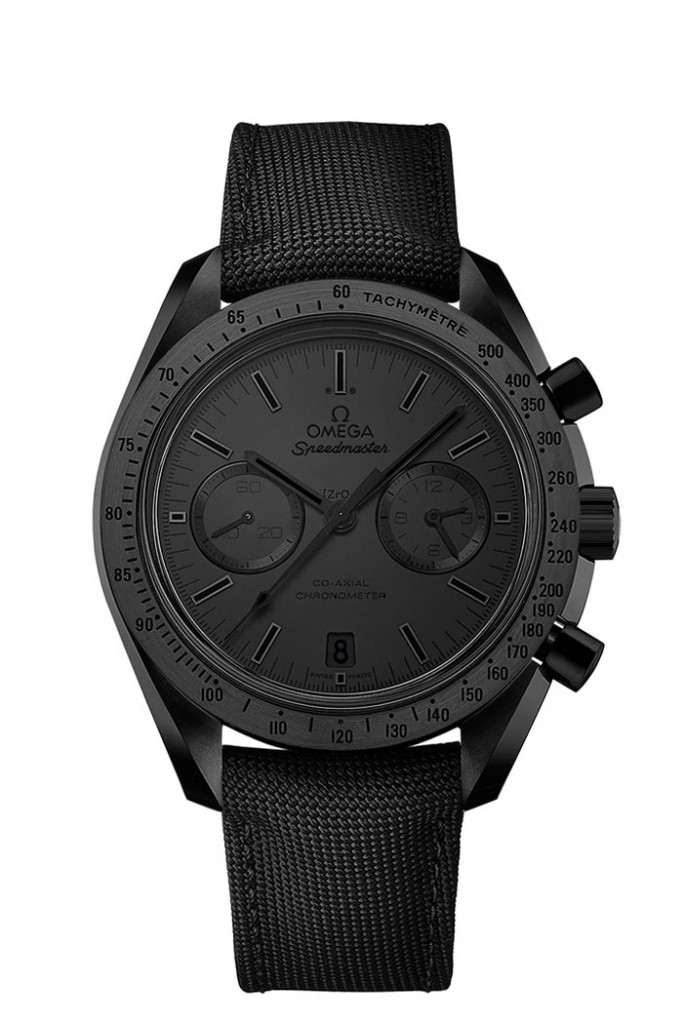 The most intriguing of these models is what they call the Black Black edition. Maybe they could’ve called it ‘Double Black’ or ‘Black2’ or something. Anyway, the way this watch works is that it’s all black. Everything, and I mean everything, is black. The case is matte black, the bezel is matte black, the hands and indices are black and even the date in the window is black. The matte black dial is made of ceramic and is laser cut to the perfect finish. While it’s less useful I’d prefer this watch of the four for it’s oddball charms.

All of these are $10,750 except for the Sedna Black version which is $12,450. Not a bad watch at all and there’s a lot of workmanship for the money, ceramic is very hard to machine properly because it’s quite easy to shatter. There’s a lot of choice available, and that’s what we like here at WristReview. What’s your favourite?