Drop your Rolex (figuratively), put your head up and open your ears. Yes, you there! At the back! I said stop playing with that Rolex on your wrist there. Because this is the Blancpain X Fathoms, the  55mm dive watch a 5 minute countdown and mechanical pressure gauge with a memory. The Deepsea model from Rolex is in trouble… 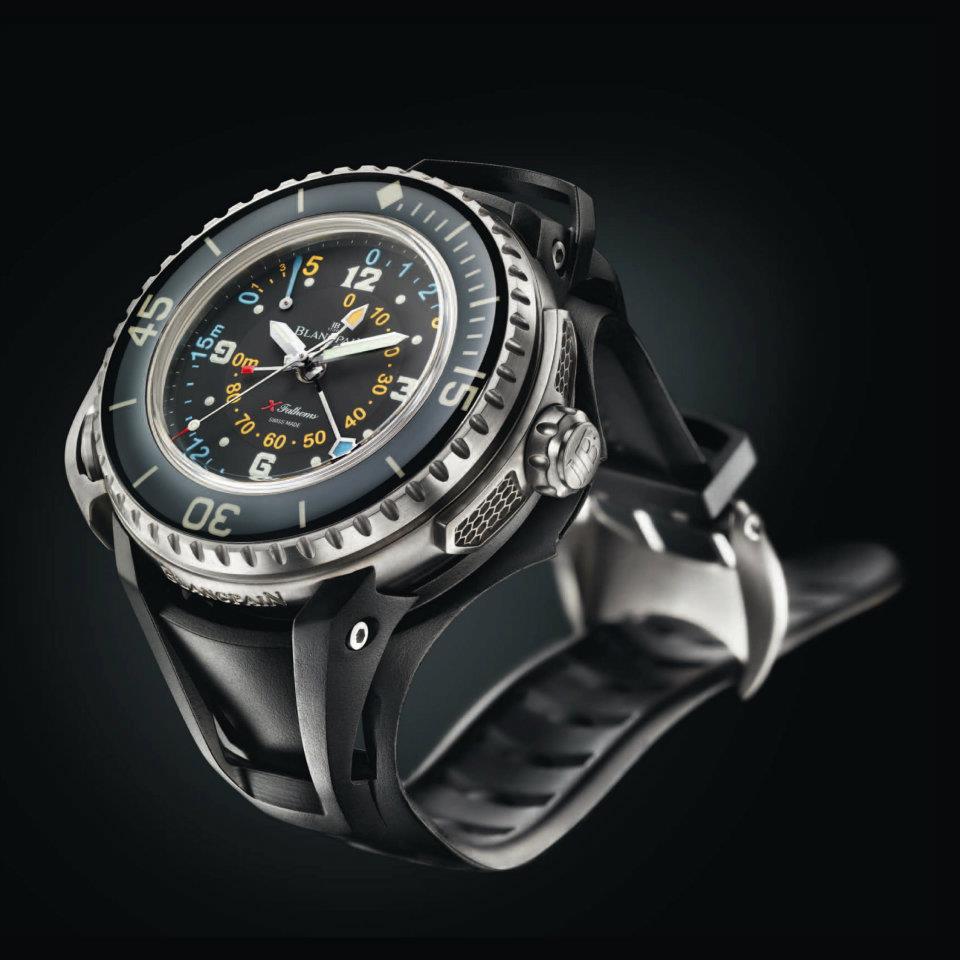 That’s right, a whole 55mm in diameter. This is without a shadow of a doubt a diver’s dream watch. First off is the sheer size of the piece, it’s impressive to say the least. Let’s put it into perspective a minute. The largest Omega Planet Ocean is the 45.5mm chronograph. The Rolex Deepsea is 44mm in diameter. A whole centimetre larger the Blancpain is. It’s also got their domed bezel; synonymous with the 50 fathoms line of watches. 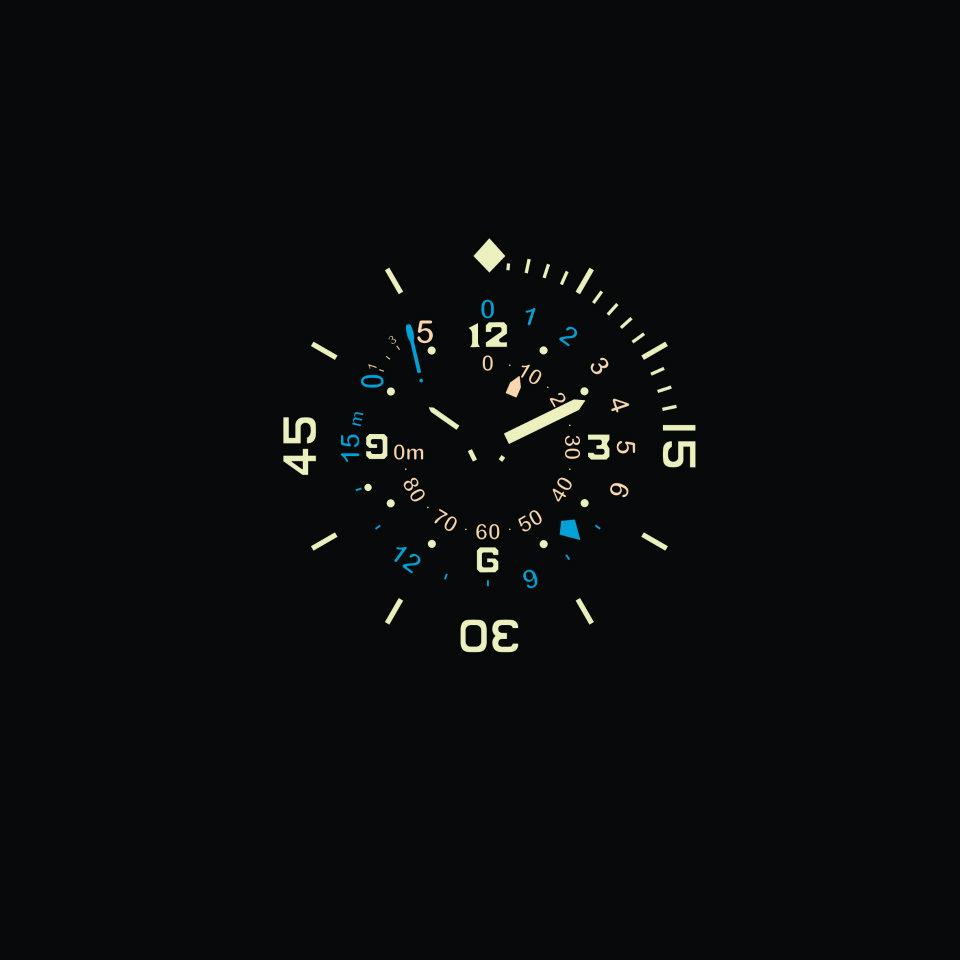 The X Fathoms uses the Blancpain Calibre 9918B. It’s a self winding calibre that’s 36mm across, has a power reserve of 120 hours and is made of 411 independent parts all screwed together. If we look to the reverse of the watch we can see that unlike the Omega there’s no viewing window. Oddly, unlike the Rolex, the case back isn’t solid either. There’s three mech triangles arranged to look similar to the radiation hazard symbol (one of Blancpain’s other watches is commemorative of the fact that Blancpain stopped using radioactive lume (they’re also on either side of the crown, too). If you think that this opening restricts the watch’s maximum depth, then you’re right. If we’re battling out the specs then the Rolex would win as the X Fathoms has a maximum depth rating of just 300m. But, not only is it very unlikely that you’ll ever take it down to that level (you might… I don’t know) but beyond that you should probably invest in a submarine. 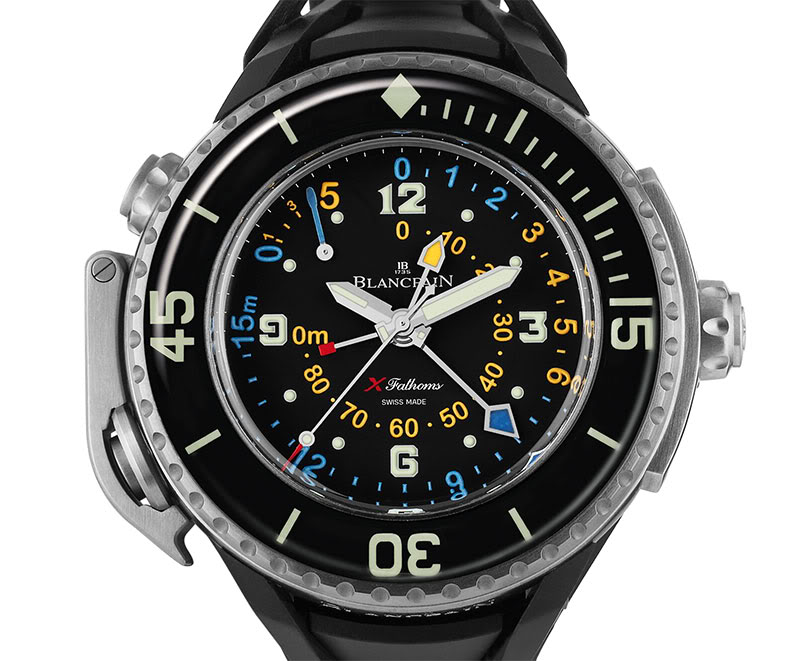 This watch has what’s known as a retrograde 5 minute counter. What’s this? The counter itself gives you a 5 minute countdown, something that would be really useful for divers. If you can explain why, please feel free to send us an email or leave a comment at the end of the article (don’t do it yet!).

One of my favourite things about the 50 Fathoms series is the beautiful domed bezel. We can’t count the Bathyscaphe series there as it hasn’t got the bezel. It’s really hard to dome glass full stop so putting it on a bezel is a task indeed. 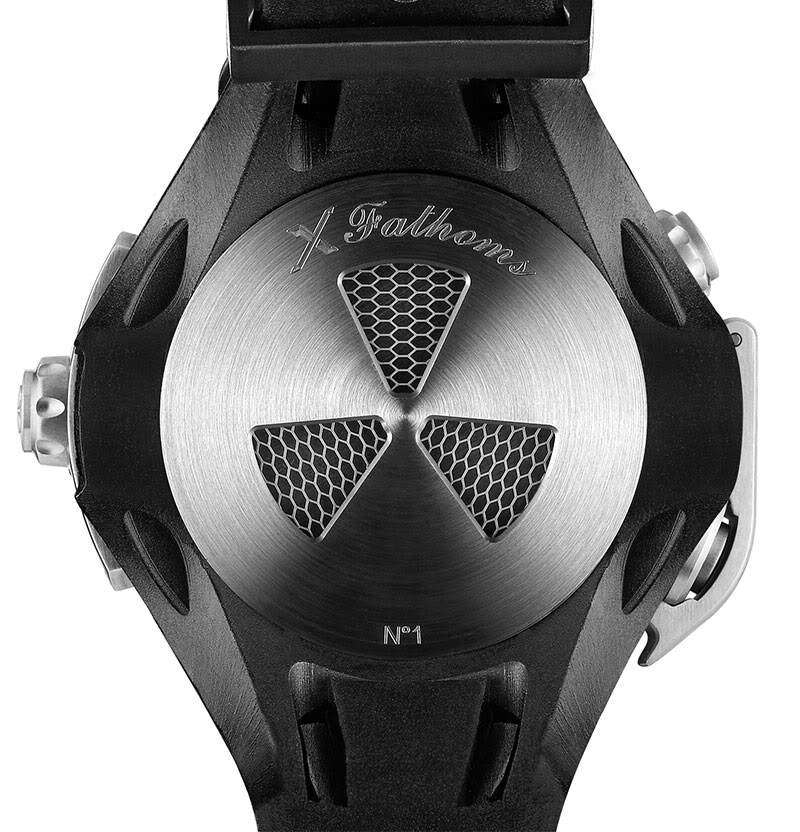 If you find the helium valves on Omegas irritating then you’ll be doubly annoyed at the X Fathoms. At the 10 O’Clock position is, you guessed it, a helium valve. It’s pretty small and Blancpain doesn’t  make a big deal out of it which is refreshing indeed. It’s important to remember, however, that unless you plan on saturation diving then this doesn’t really serve a purpose, but it’s nice that they added it anyway just in case. Then there’s that big Panerai-esque thing that stretches from half 7 to 9 O’Clock. It actually has a purpose, it locks down the reset mechanism for the mechanical depth gauge that this watch features. While some watches have an electronic depth gauge, you’ll be pleasantly surprised by the mechanical setup of the X Fathoms.

This isn’t an easy complication the understand or explain. What I can tell you is that this watch has essentially two depth meters. The inner ring with the green arrowed hand is the marker for the current depth you’re at. It’ll work up to 90 meters down which is roughly a BSAC Advanced Diver level (correct me if I’m wrong). Then there’s that outer ring which goes up to 15 meters, that is the maximum depth recorder, once you get to 15 meters and below it stops working as it’s reached its limit, but as you come back up it’ll follow the current depth gauge back to zero. If you’re above 15 metres then it’ll stay at the maximum depth you achieved until you unlock it and reset. 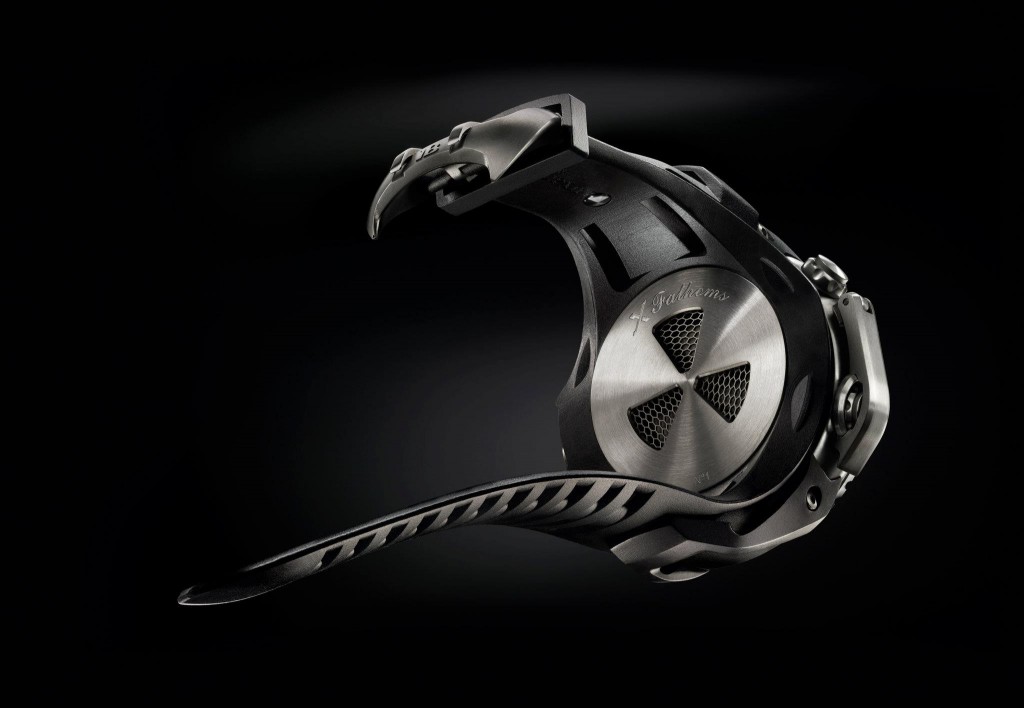 The rubber strap is a beautiful matte black ordeal with a pretty Blancpain pin buckle so there’s little chance it’ll come off when diving and it’s super easy to adjust for your wetsuit (or when your wrists change size slightly throughout the day). And when you wear it on the beach you don’t need to worry yourself about sand getting in all the little places. Just be aware of the gaps on the watch that allow water in to let the depth gauge work. Wash the watch under the tap as soon as possible and it’ll be fine.

In summary the Blancpain has some nifty diving features that really set apart from every other dive watch out there. The depth gauge is unique to the watch, the countdown timer is a super useful tool for divers and the unidirectional domed bezel is the icing on the cake. It’s limited, so go check it out now! For more info, please visit blancpain.com