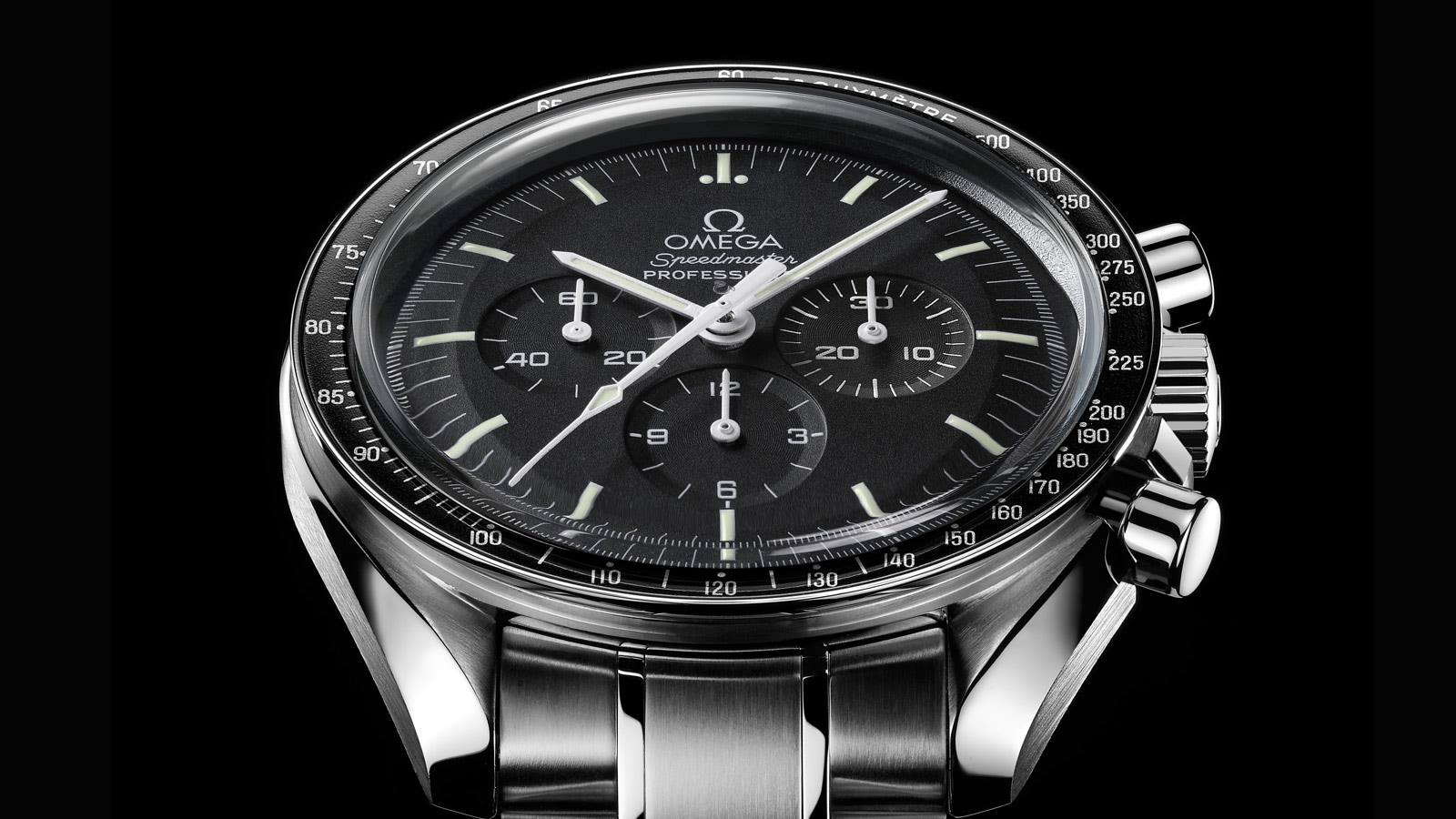 A Brief History of The Omega Speedmaster

WristReview is back once again for another look at a modern day icon in the watchmaking industry. We’ve had lots of success with our other Brief History articles, where we looked over Rolex’ three most popular models to date, the Submariner, the DateJust, the Daytona and Panerai’s story. Now we’re looking elsewhere, in this particular circumstance, Omega. Particularly, the most famous chronograph watch of all time, it can only be the Speedmaster. For those who are unfamiliar with our format of writing these Brief History articles, we don’t tend to dawdle on the facts when it comes to these, so if you want a really long focus on one particular detail we’d advise you to search elsewhere. However if what you’re after is something that’s informing yet quite concise and easy to read while on the way to work or if sat down for a lazy weekend then read on ahead!

The first Omega Speedmaster from 1957

The Speedmaster was released by Omega in 1957 as a sports chronograph, it helped to solidify Omega as the perfect choice manufacture for timing equipment for none other than the Olympic Games. The watch gained its name from the use of a tachymetric bezel on the piece and the fact that Omega has a tendency to use the term ‘Master’ as a part of its watches, three other examples being the Seamaster, Railmaster and the newly released Globemaster.

Much like the faithful reproduction of today, the Speedmaster ’57, the original Omega Speedmaster watch has a broad arrow hour hand and was the first watch to use the design which has become somewhat commonplace on Omega watches today. That watch was designed by Claude Baillod and has some standout features that survive on modern Speedsters today including the chronograph subdial layout and the domed crystal (which was Plexiglass but has been replaced on most models by sapphire crystal). The watch had an antimagnetic Lemania based calibre, Lemania being an Omega subsidiary supplied it as an ebauche that Omega modified to make it the 321 calibre. The base calibre ended up being used by the likes of Vacheron Constantin, Patek Philippe and Breguet. 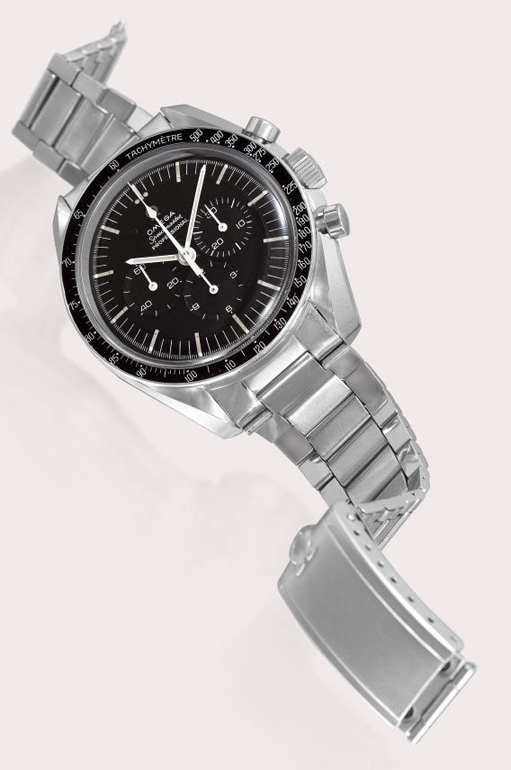 The Omega Speedmaster design that we know and love today as the ‘Moon Watch’ came about in 1963 with the reference ST 105.003, this watch came not only with the familiar design synonymous with the model but also new at the time O-ring gaskets around the chronograph pushers which added enormously to the water resistance of the watch. The ST 105.003 watch also had an increased size from 39mm in diameter to 40mm although it still kept the straight lugs from earlier iterations of the Speedmaster. In this same year Omega brought out a 42mm Speedmaster reference ST 105.012 with so-called Lyra lugs, this lug design is still in production today on the current Speedmaster watches, the Professional word that’s also used on today’s Speedmasters was introduced during the summer of 1965.

Omega was completely unaware of what was happening at the same time on the other side of the planet, while Switzerland was still a quiet retreat for the rich the rest of the world was locked in a deadly battle of wits where the stakes couldn’t possibly be higher, I, of course, refer to the Cold War. The USA had been humiliated by the USSR as they propelled the first man, Yuri Alekseyevich Gagarin, the Soviet cosmonaut became the first human ever to venture into space. Naturally the USA didn’t want to let the Russians have all the fun and glory, so NASA got to work on beating the Russians at their own game. Part of their research was to find a wristwatch to keep the astronauts company as they worked, in 1962 NASA purchased chronograph watches from many companies such as Omega (obviously), Rolex, Longines, Breitling and many more, bearing in mind that these companies were completely unaware at the time. 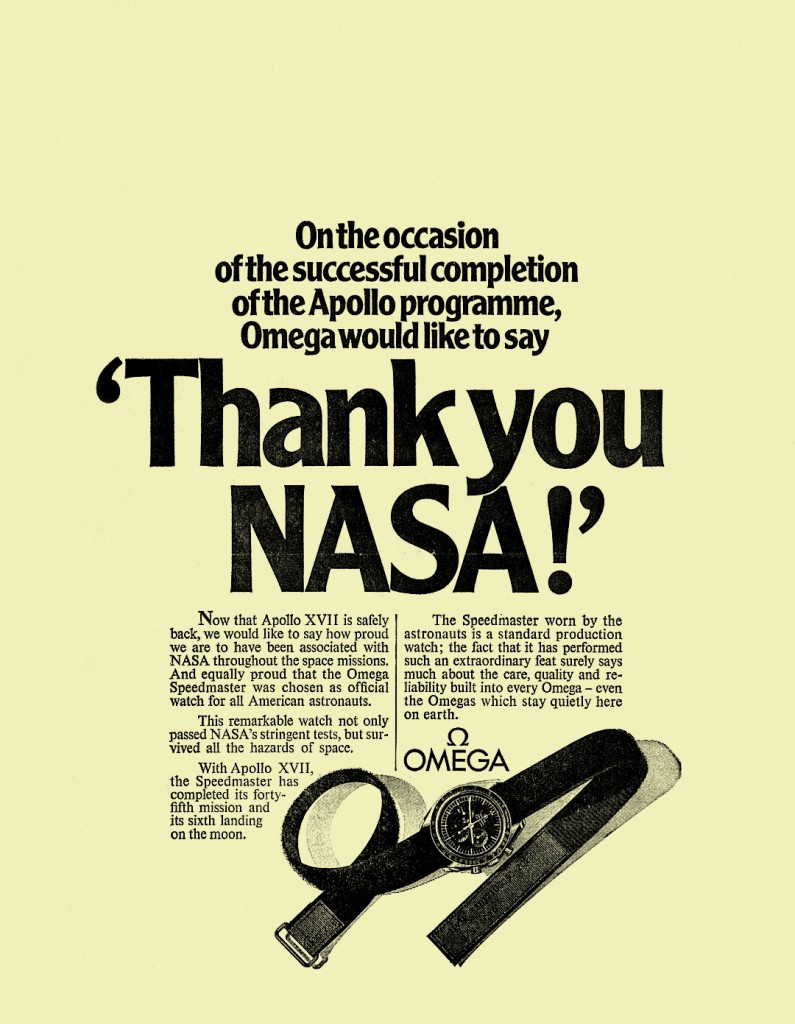 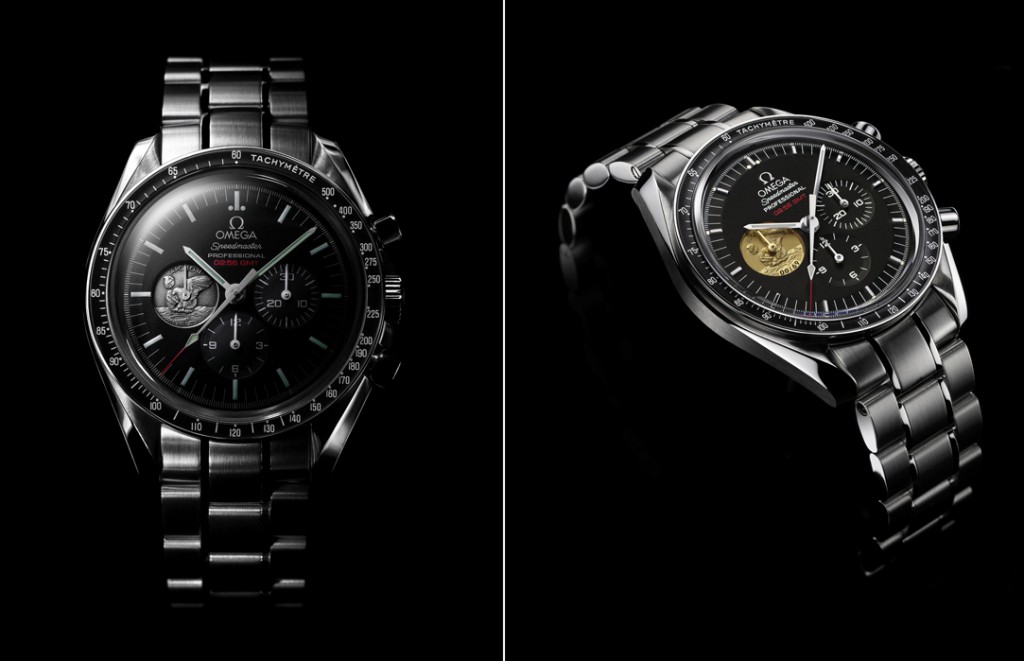 Omega Speedmaster Professional Moonwatch Apollo 11 “40th Anniversary” Limited Edition: in steel on the left, in platinum on the right

In fact, it wasn’t until 1965 that the people at Omega cottoned on to what was happening in the space race when they noticed that Ed White, the NASA astronaut who took the first spacewalk, was wearing an Omega watch. This was also when Omega started using the word Professional on the Speedmaster. It’s a good term to use as well as the Speedmaster was the only watch to pass the toughest test of any watch’s ability to keep time, in fact, it makes Jaeger-LeCoultre’s 1000 Hours Control test seem like a quiet night in with a Crossword book, here’s a list of all the things that were tested, bear in mind as well that there had been a test before this to weed out some of the watches and give NASA 3 watches to test further.

The watch must endure:

The first watch worn on the moon was worn by Buzz Aldrin on the 20th of July, 1969. At the time Neil Armstrong had decided to leave his Speedmaster Professional in the lunar lander as it turned out the Speedmaster was more reliable than the electronic timer inside the module, sadly though Aldrin’s watch was stolen a few months after his return to Earth, however, Armstrong’s watch is on display in the Smithsonian Air and Space Museum. After this Omega started engraving the Speedmaster casebacks with the words “The First and Only Watch Worn on the Moon”, a tagline it uses even today.

Omega’s next big space adventure came about with the Apollo 13 mission, an electrical failure meant that the crew needed to move to the Lunar Lander module, which was tiny, to conserve power. the pilot at the time, Jack Swigert, used his Speedmaster to record the crucial 14 seconds of boost needed to angle the shuttle just so that return to Earth. After hearing about the events, NASA awarded each astronaut the Silver Snoopy Award for “dedication, professionalism, and outstanding contributions in support of the first United States Manned Lunar Landing Project”.

Omega would continue to make space watches to this day, along the way releasing many limited editions of the watch including two Omega Speedmaster Professional Moonwatch Apollo 11 40th Anniversary editions with 7969 pieces made of steel and 69 examples made of 18K yellow gold. The current Speedmaster lineup is split into different varieties all bearing the name, but the most popular are the Moonwatch, the Speedmaster ’57 and the Mark II.

Where’s the Speedmaster headed next? Well, we can’t be sure entirely but we can definitely hazard a guess that the Moonwatch will stay as traditional as possible in at least one version, Omega still produces a manually wound Plexiglass Moonwatch using a rhodium plated 1861 movement which is resilient and great to look at. What we do know is that Omega is working to produce a new version of the Moonwatch which is designed to resist temperature changes from -133°C to 30°C, the temperatures of Mars. Maybe sometime in the future we will be able to buy a Marswatch, I for one am glad that Omega is unlikely to run out of ideas with this model anytime soon. For more info, please visit omegawatches.com