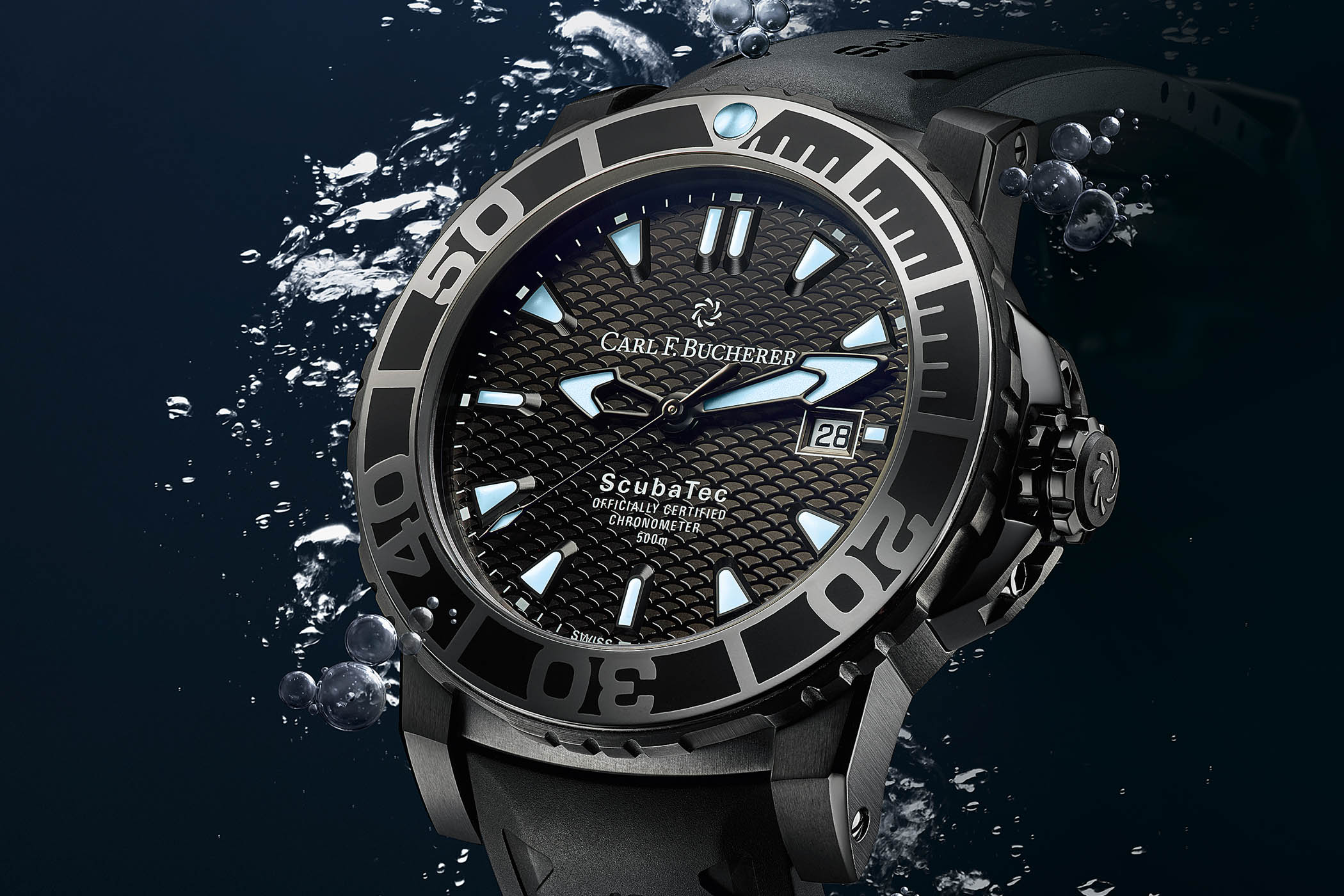 If you’re a fan of large Stallone-sized diving watches, but you also like to wear something that’s a little left-field, then this new Scubatec from Carl F.Bucherer could well be your next watch. There’s plenty of intricate details adorning the watch to keep you amused, but they’re done in a way that doesn’t remove any of the practicality required from a professional diving tool watch. It also looks pretty cool in this new black form, let’s take a closer look. 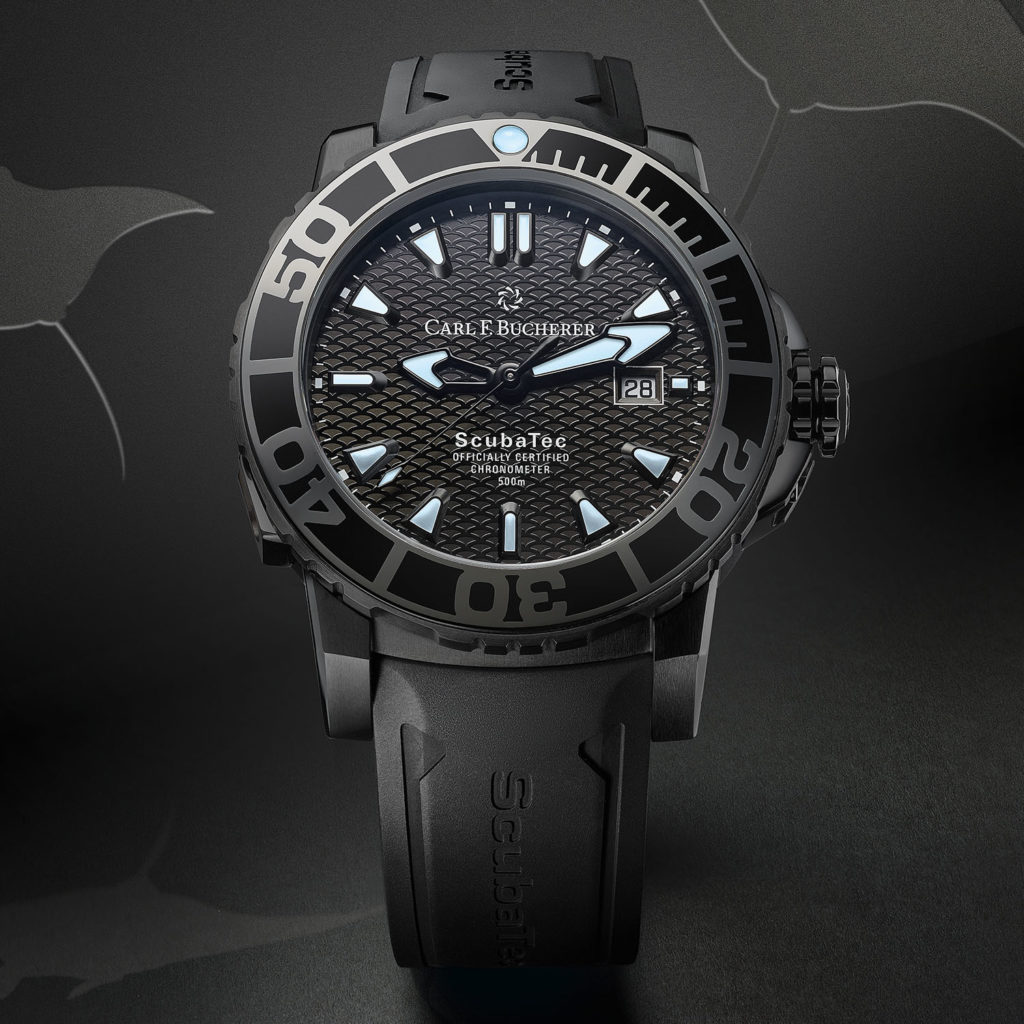 Now, you’re probably worrying, because I mentioned Sylvester Stallone who is known for wearing gigantic Panerai Submersibles to suit his wrists, that this new Scubatec is going to be completely unwearable and therefore you should skip to the next article. Well, I’m happy to report that this watch isn’t as large as a Submersible. Whereas big Subs such as the PAM01305 weigh in at 47mm x 16mm, the Scubatec measures 44.6mm in diameter and is 13.45mm thick. That doesn’t immediately sound like the biggest difference ever, but those two millimetres can make all the difference to some people, especially watch nerds.

The case itself is made from titanium and then given a DLC coating to provide it with that aggressive black edge. The design itself is made of several angles and layers to break up the shape of the watch, giving it a stealthy appearance. Sheer edges and angles also make it seem both technical and sporty in its appearance, and the black ceramic bezel with substantial numbers ties in well with the dial that has a wavy-style pattern. There’s even a helium escape valve at 8 O’clock, with this watch being 500m water resistant that is a necessary feature for compression divers who will spend extended periods at great depths. 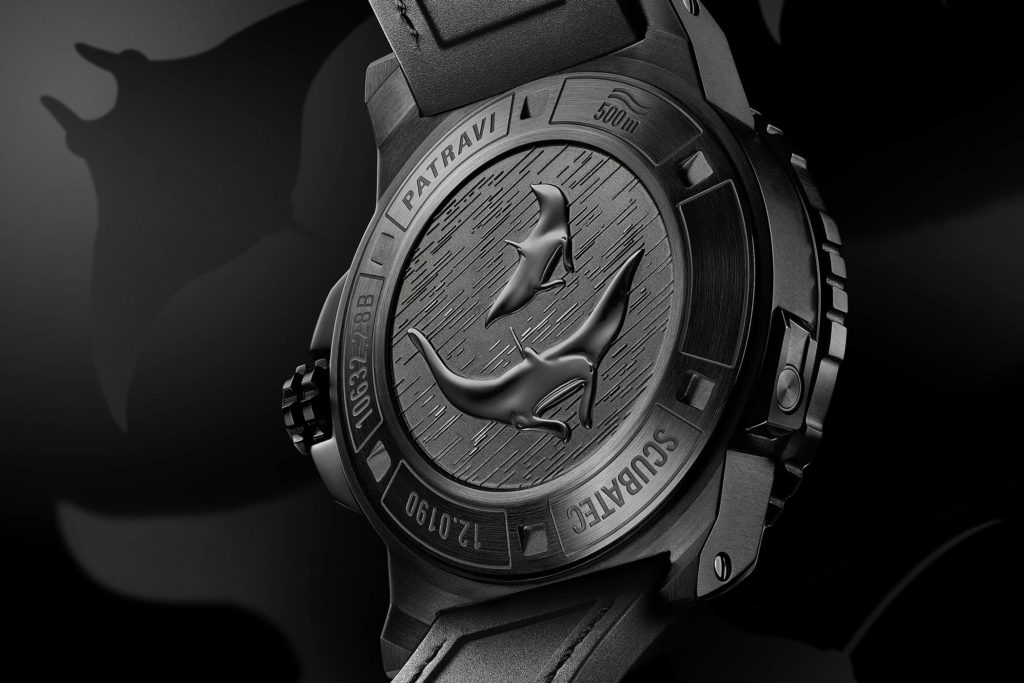 The chunky markers and hands make reading this a breeze, and in low-light conditions, the SuperLumiNova coating makes them stand out. Powering the hands is the calibre CFB 1950-1, which is based on a COSC chronometer-certified ETA ebauche, the calibre 2824 to be precise. That, coupled with the meagre 38-hour power reserve, is the only real draw on this watch, which costs €6400. On the plus side, there are two straps available, one of which is made of PET plastic and is recycled from plastic which has been floating in the ocean. This watch is not limited in production and, despite the Manta Rays embossed on the caseback, is not a special edition watch for the Manta Trust.