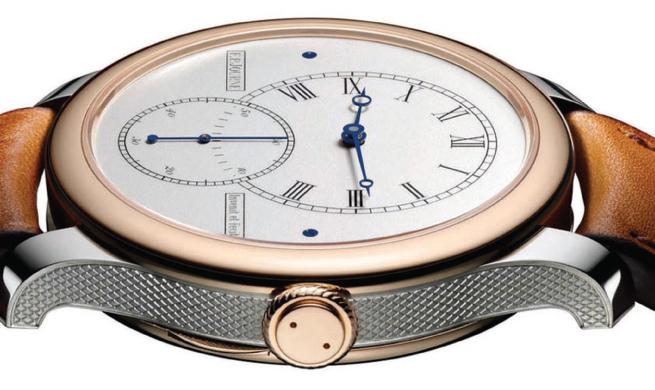 Francois-Paul Journe, well-known for his brand started in 1999, with the famous “infenit et fecit” signature, graduated in 1976 from the Ecole d’horologerie in Paris and quickly established a reputation as a skilled restorer of (mainly) 19th century high grade clocks and watches. With his reputation growing, soon requests came in from important and influential collectors to make special one-offs. Journe took his time, and started in 1976 to built a tourbillon pocketwatch that would met his standards. It took him 5 years, and in 1983 he presented the first F.P. Journe pocket tourbillon, followed by a pocket watch incorporating his own “remontoire” system.

From 1983 to 1989, numerous one-offs were constructed by Journe from Paris. In the nineties, the ambition to start his own brand grew, and Journe developed the prototype “tourbillon souverain”, combining the tourbillon and remontoire in a wristwatch for the first time. This patented combination, together with the pure gold movement would become key elements in the “infenit et fecit” DNA of the F.P. Journe brand, launched in 1999. In 2013, F.P. Journe is a an established player in the high-end watch world. We all know the Octa and Souverain as important model lines in the current Journe portfolio. In order to celebrate the 30th anniversary of his first pocket tourbillon, Journe has introduced the commemorative Historical Anniversary Tourbillon, a 40 mm wristwatch. The watch is a real beauty. Journe has chosen to make a rather close resemblance to his initial pocket tourbillon. As a result, the anniversary watch looks in nothing like current models of the Journe brand. The 40 mm  rose gold and guilloché silver case is guilloché-decorated, and shows a dial with again close resemblance to the original. The hours are displayed with roman numerals, and a smaller seconds with Arabics. The signature “infenit et fecit” replaces the original “A Paris”.

The back of the watch is a feast for the eye. The beautifully decorated hunter caseback opens to show an exceptional movement, the compares to nothing we see today. The materials used, gilt brass, and the robust positioning of the bridges carrying the tourbillon give you the experience of a complex 19th century pocketwatch. Presented last October in a series of 99, the Historical Anniversary Tourbillon is a watch in is own right, not easily comparable to other watches currently on the market. That’s an apropriate way to celebrate the position of F.P. Journe as a watchmaker.

Internet entrepeneur and watch aficionado. His favorite brands are IWC, A. Lange & Söhne and F.P. Journe. Nick has a special interest in the small, independent high-end watchmakers, such as Urwerk, Greubel Forsey and F.P. Journe. Proprietor of Wrist Watch World.