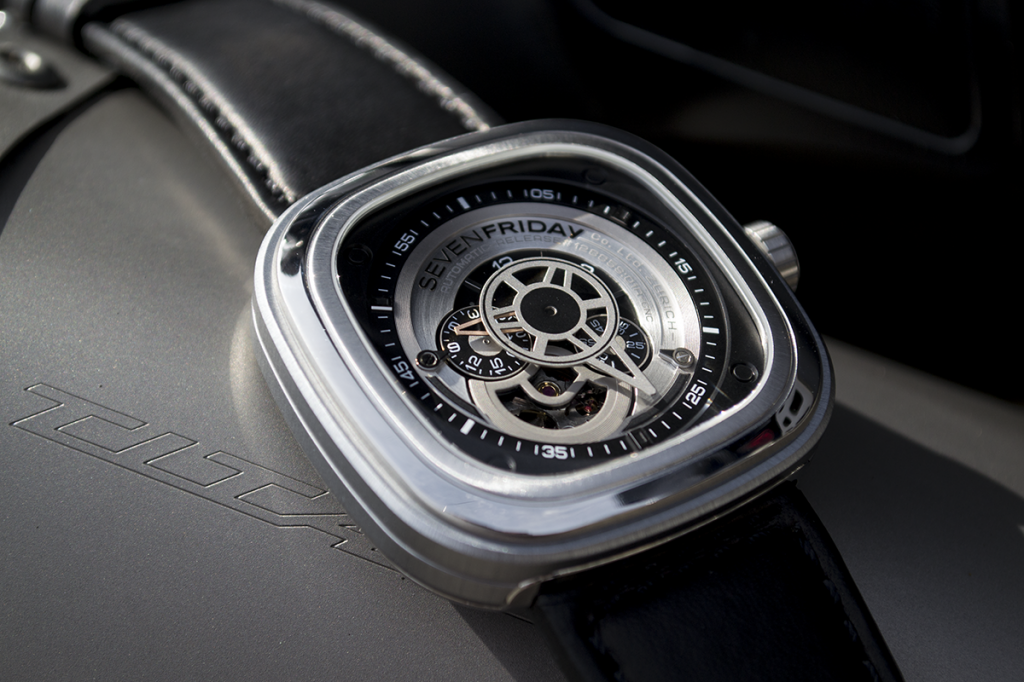 SEVENFRIDAY P1 (I’ll be making reference to it as the SF for now) – A couple of weeks ago, I had the pleasure of sitting down with a watch distributor friend of mine to talk watches while sipping on our Pret coffee’s (we’re clearly too cool for Starbucks).

So, after talking watches for some half an hour – it was time to engage in the reason as to why we met up in the first place. Mark handed over a SF P1, to quote the Zürich based company ”Fresh From the Press” timepiece. Also if you didn’t notice, a clue into the naming is in the title. According to the guys over at SF, everyday is Friday – there is no long explanation, it is as simple as that.

I did think at first the watch looked a bit big for my wrist and it wasn’t my style….? However, I quickly got over that but make no mistake its still an imposing timepiece. Once it was on my wrist, my inner self grinned. How strange, what was it about this little known watch company that had me quietly amused?

First off, the TAG Heuer built asymmetrical dial of the P1 is quite endearing – which is very unusual for me as noted weeks ago here. The mechanical, industrial machinery like dial can seem to be a bit strange and appear difficult to read at first but it works very well. With the seconds disk ticking away between 5 and 4 o’clock, the big and clearly visible minutes hand at the forefront and a tiny bronzed hour hand just underneath it; also at 9 o’clock is a 24 hour disk. There is no date function but I’m sure as you’re flicking through your iPhone you’ll quickly glance at the date?

This piece is powered by a Japanese 21 jewel Miyota 82S7 movement (don’t be fooled by the Zürich inscription on the dial), with an open balance wheel; which can be seen through the dial at 7 o’clock. The case is actually made by the people over at Corum, so you know its good quality. The P1′s case is 47.6mm x 47mm, 13mm thick and is all brushed stainless steel, with the exception of the bezel which is polished; surrounding the sapphire crystal glass. This piece is also waterproof to 3 ATM, if you decide to have a splash around in the water.

The leather strap is quite thick and at  first a little stiff but after an hour or so it will take on the shape of your wrist. Note to self, I must by a wider NATO strap – reason being is the lugs on this baby are 28mm! It does have integrated lugs, which I do believe actually make the P1 that bit more comfortable to wear. However, you may struggle to hide this very proud watch under your shirt cuffs…

SEVENFRIDAY – no, my caps-lock didn’t get stuck but rather its the brands little shouty way to say we’ve arrived. In a way they have. They have decided to appeal to a £500 – £1000 marketplace of timepieces. A watch that could be considered luxurious but that would still fall into that, spontaneous ”yeah, I think I’ll have one of those” category. Yes, the aficionado’s may argue why not just go out there and buy a vintage timepiece in that price bracket, that is most probably more well known? You have that choice but not everybody is a watch geek/nerd and has the patience to search till they’ve got what they wanted.  However, after wearing this charming timepiece for a week, I came to the conclusion despite its short comings, this is one watch you may want to have in your collection simply because its an everyday wearer.

This SF P1 can be purchased for £695, which in all honesty is a bit of a bargain.  For more information on the P1,P2 and P3 visit the official SEVENFRIDAY website.