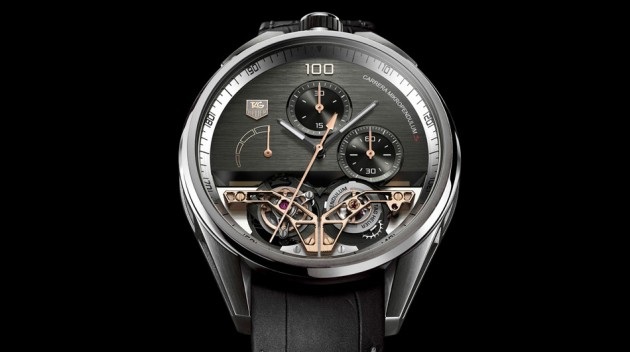 Another bullhead design, this time from Tag Heuer. This concept watch uses magnets to regulate the time and with this new design, the tourbillon now holds the world record for the fastest beat per hour at 360,000. Not sure whether this watch will be proceed to the next stage of commercial production. Having magnets in an all mechanical setting does introduce very interesting issue about effect of electromagnetism and strong currents on this design.

TAG Heueur’s atelier Avant-Garde Haute Horology is the 25-person workshop behind most of the company’s major developments, including the high-precision Mikro Series. For their latest project—the Carrera MikroPendulumS concept—the team has replaced hairsprings in the movement with two magnetic pendulums. With one to tell time and one to keep it, the magnetic pendulums represent a first in watchmaking.

The chronograph tourbillon—the world’s fastest—beats 360,000 each hour and rotates 12 times per minute. Divided just below the center line, the top half of the face features a power reserve meter, second counter and minute counter. The crown placement on the MikroPendulumS sits fixed at the top of the dial.