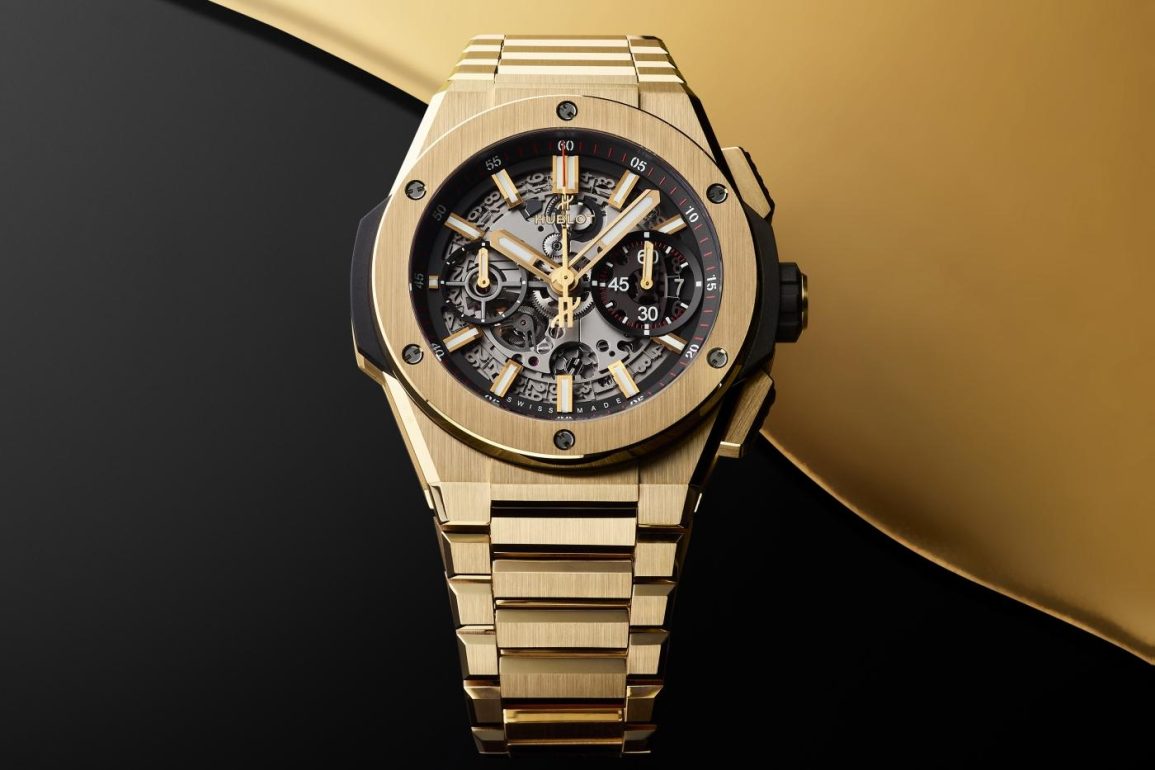 LVMH Watch Week 2022 might have already been and gone for a short while now, but that doesn’t mean we here at WristReview can sit on our laurels. There are still plenty of watches left to write about, and with that, we present six new models from Hublot, all of which feature elegant yellow gold cases. Only two years ago, Hublot marked its 40th anniversary, which is very young in the wristwatch world. 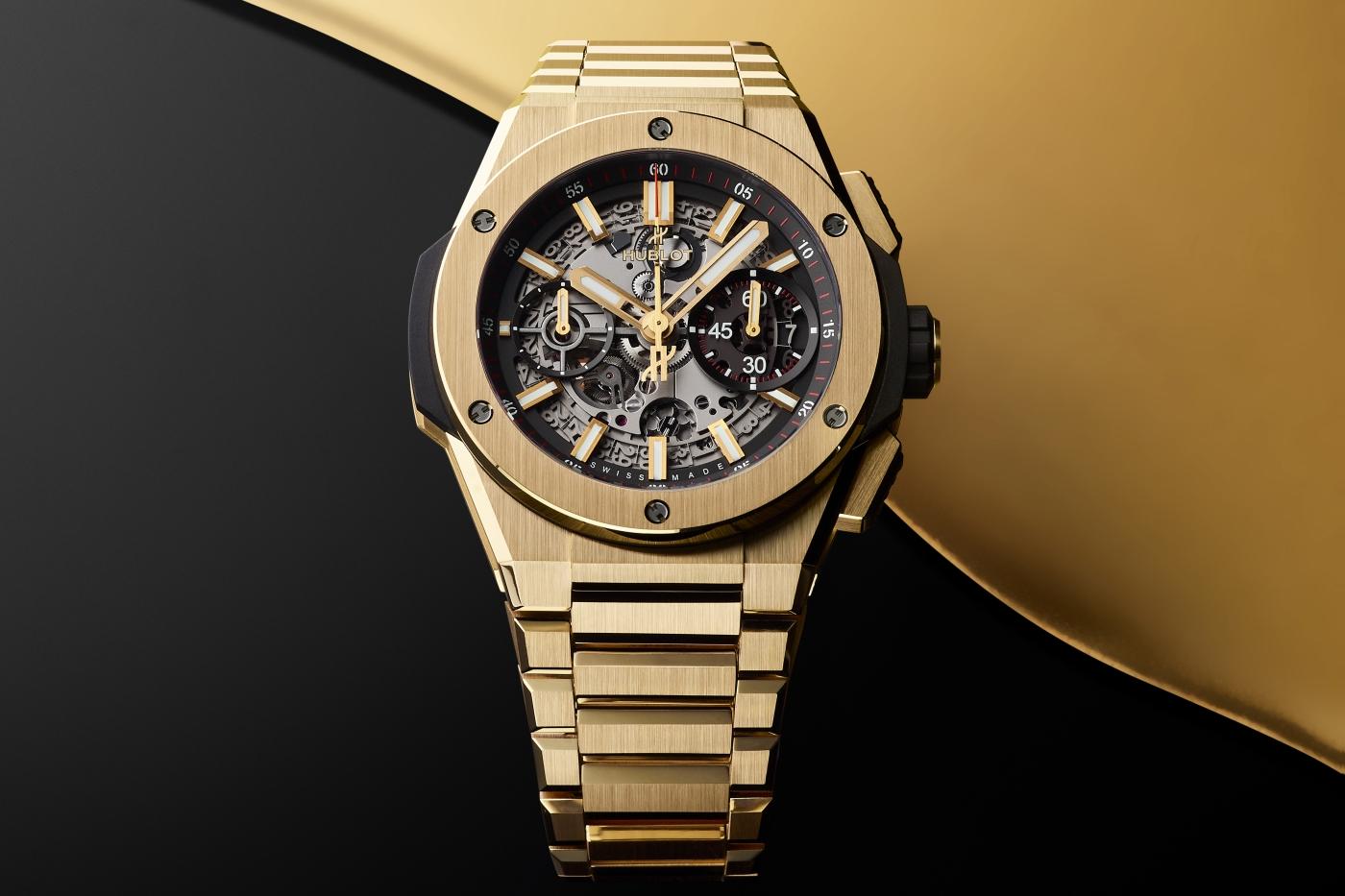 Hublot’s most popular line, the Big Bang, makes up the majority of the collection this time around. There are no less than four watches that bear the Big Bang name.

Three of those are versions of the Big Bang Integral, Hublot’s newest Big Bang line, which does away with the seatbelt style One Click quick-change strap system in favour of better proportions (seeing them in person, the watches seemed weird because they needed extra space to fit that strap system in) and a fixed strap. In this case, however, that strap is a solid 18k yellow gold bracelet that matches the gold of the case. Hublot is offering the Big Bang Integral in yellow gold or yellow gold with diamonds. 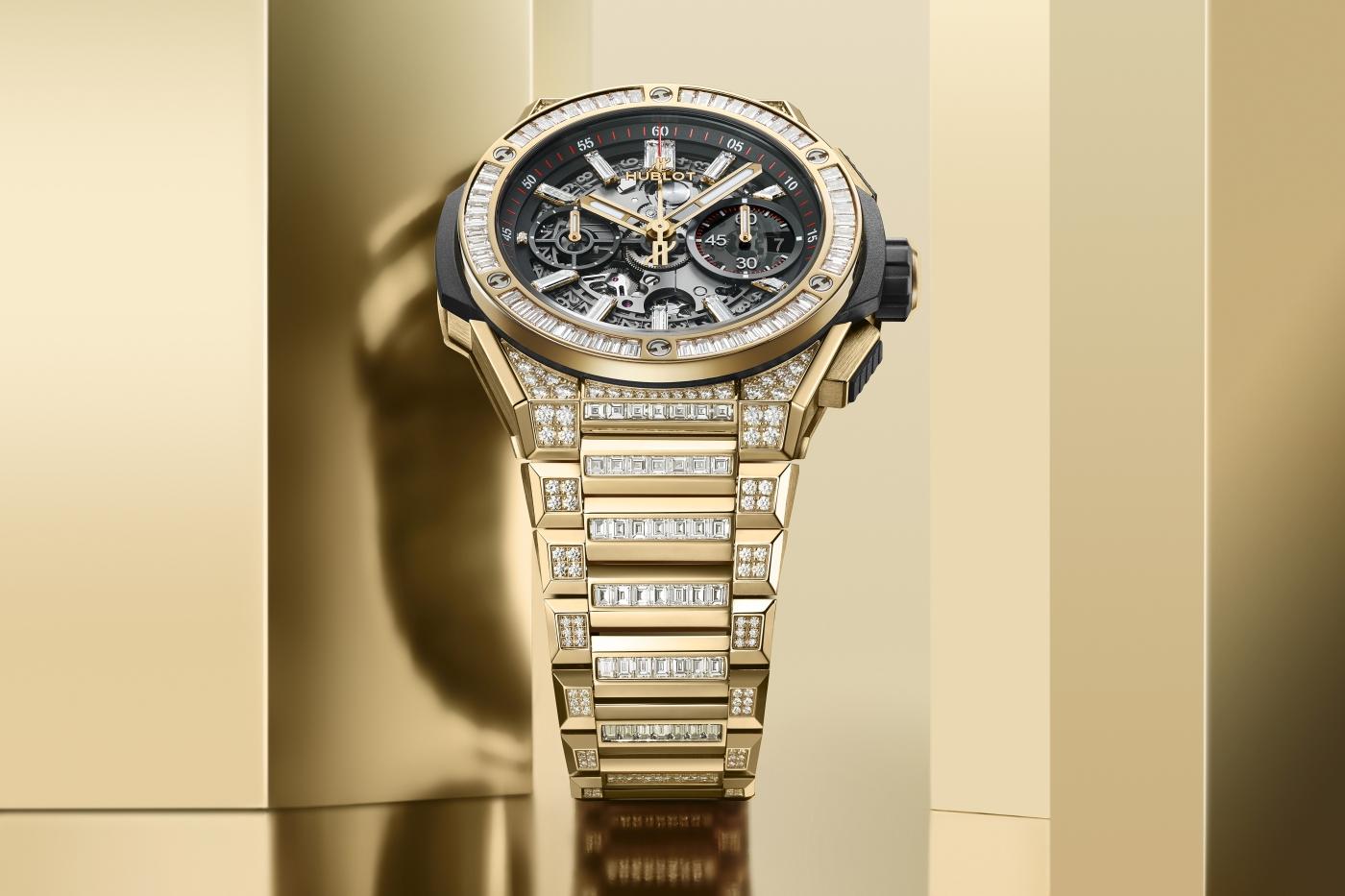 In that, you also have two choices, you can either buy the Big Bang Integral Joaillerie (jewellery), which has larger baguette-cut diamonds embedded into it, or the Big Bang Integral Pavé. Pavé is a specific diamond setting that makes the surface look like it’s been paved with diamonds, which is where the name comes from. In this case, the pavé version has smaller diamonds, with two rows of them on the bezel instead of one. 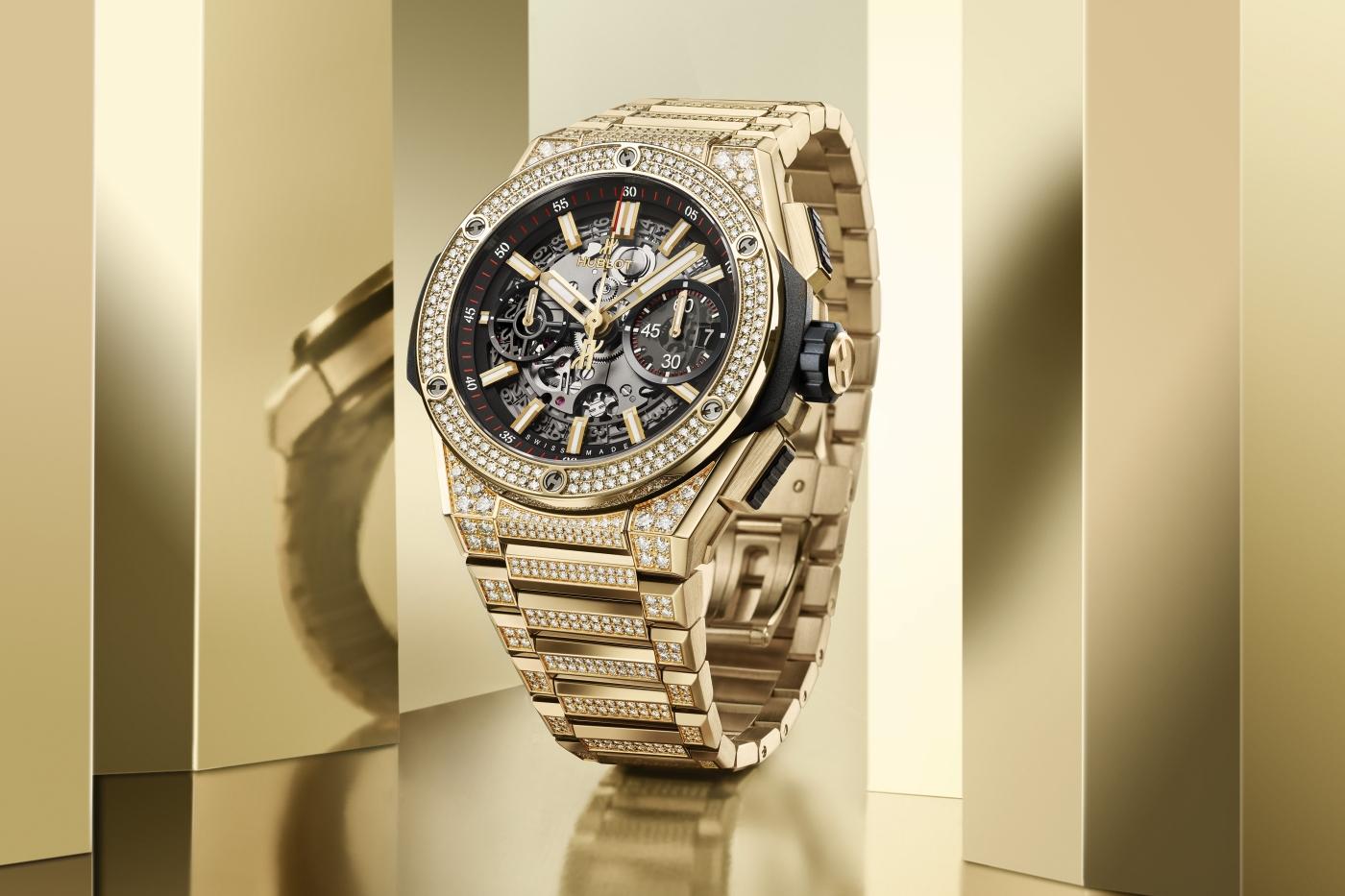 For the standard yellow gold, the price is $52,500. For pavé diamonds, that price rises to $100,000 and for the joaillerie, that goes up again to $211,000. All watches have the in-house HUB1280 UNICO calibre, which has a column-wheel flyback chronograph with self-winding, 4Hz beat rate and 72-hour power reserve. All models also feature cases measuring 42mm x 13.45mm and have 100m of water resistance. 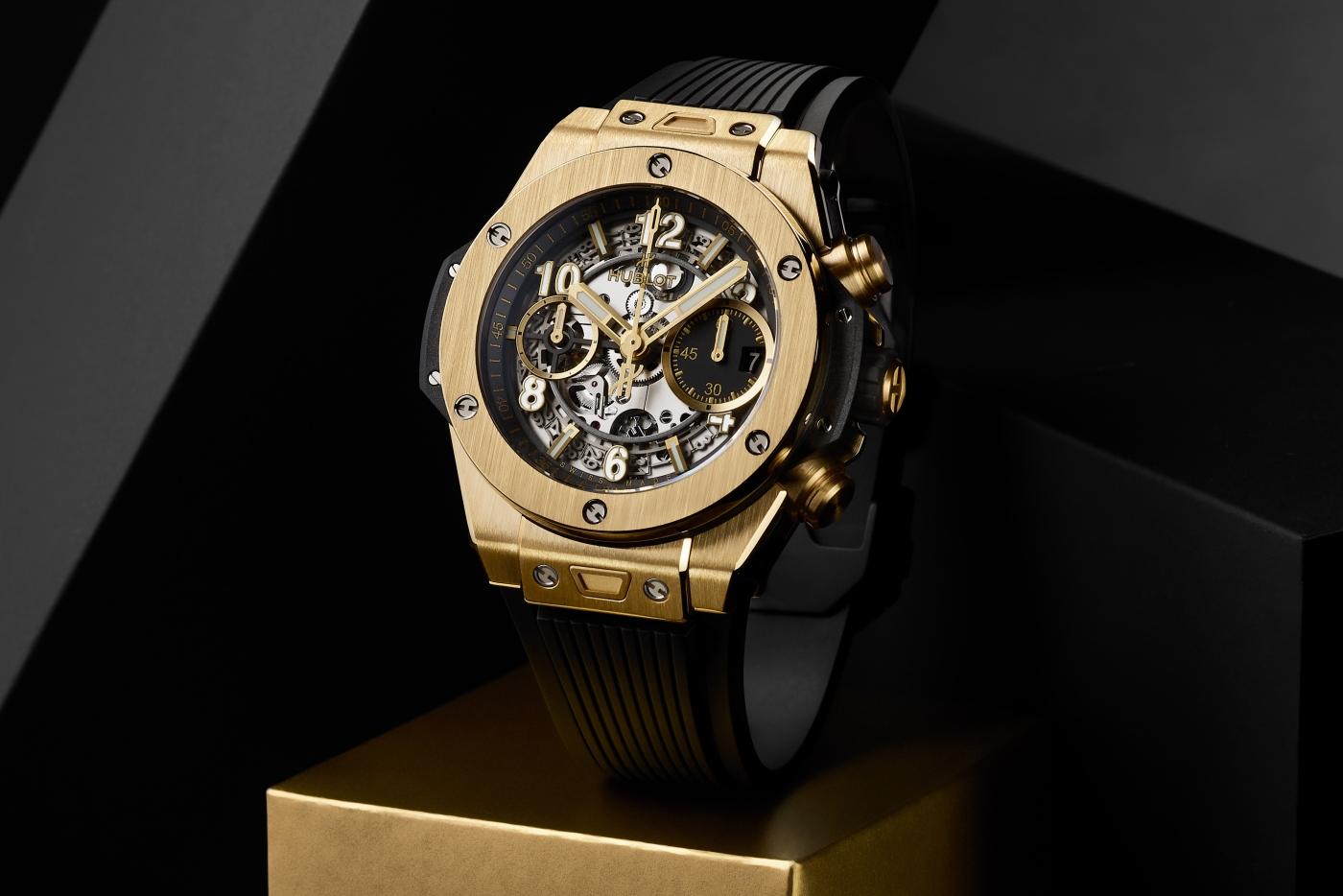 The next watch is the more traditional Big Bang Unico, which does feature the One Click quick-change system for the strap that I mentioned earlier. It’s quite handsome, although I do like the rounded look of the Big Bang Integral models more. That quick-change strap will be very useful for some, especially when you like to change attire or live somewhere where humidity is not so kind to straps.

Mechanically, nothing changes, as this watch also features the HUB1280 UNICO movement, and it’s also on display around the back like the Big Bang Integral models. The watch is slightly more imposing at 42mm x 14.5mm but costs slightly less at $36,700, probably thanks to the strap. 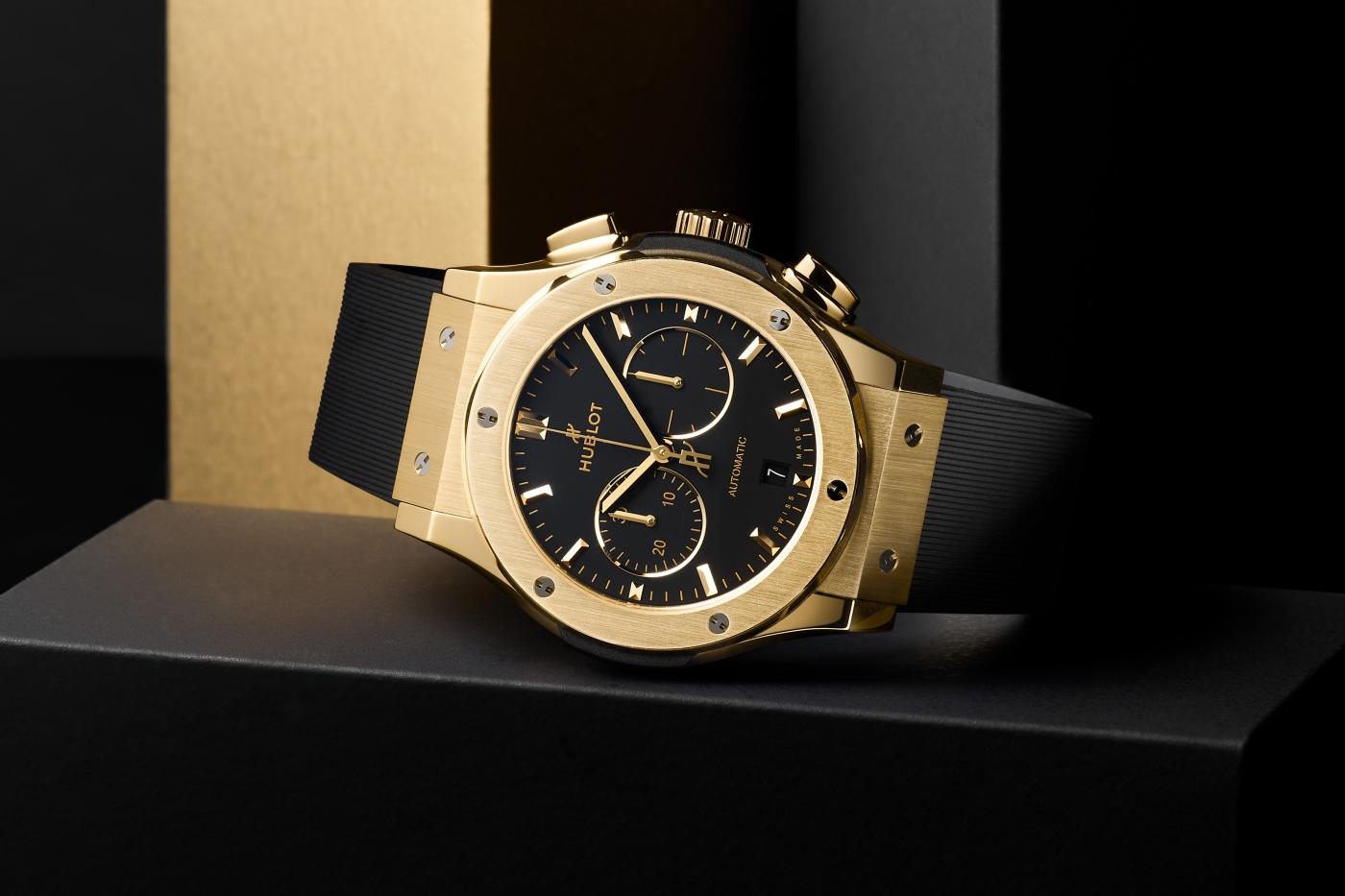 Moving away from the Big Bang name for a second, we have the Classic Fusion. This more dressy watch still has a chronograph and an 18k yellow gold case, but it’s more restrained. Hublot says that this is the first time they’ve combined yellow gold with this case size (42mm x 11.9mm). Whether that’s particularly important is up to you. You might be interested to know that this watch only has 50m of water resistance.

Inside it is the HUB 1153, which a trained eye will spot is based on an existing calibre, most likely made by ETA, Valjoux or Sellita. This has been the sticking point of the Classic Fusion models for a long time now, but Hublot has yet to fit its own calibres in. Maybe they know their customers aren’t that interested in horological prowess? Nevertheless, it has a 42-hour power reserve and a 4Hz beat rate. The price on the rubber strap is $26,800. 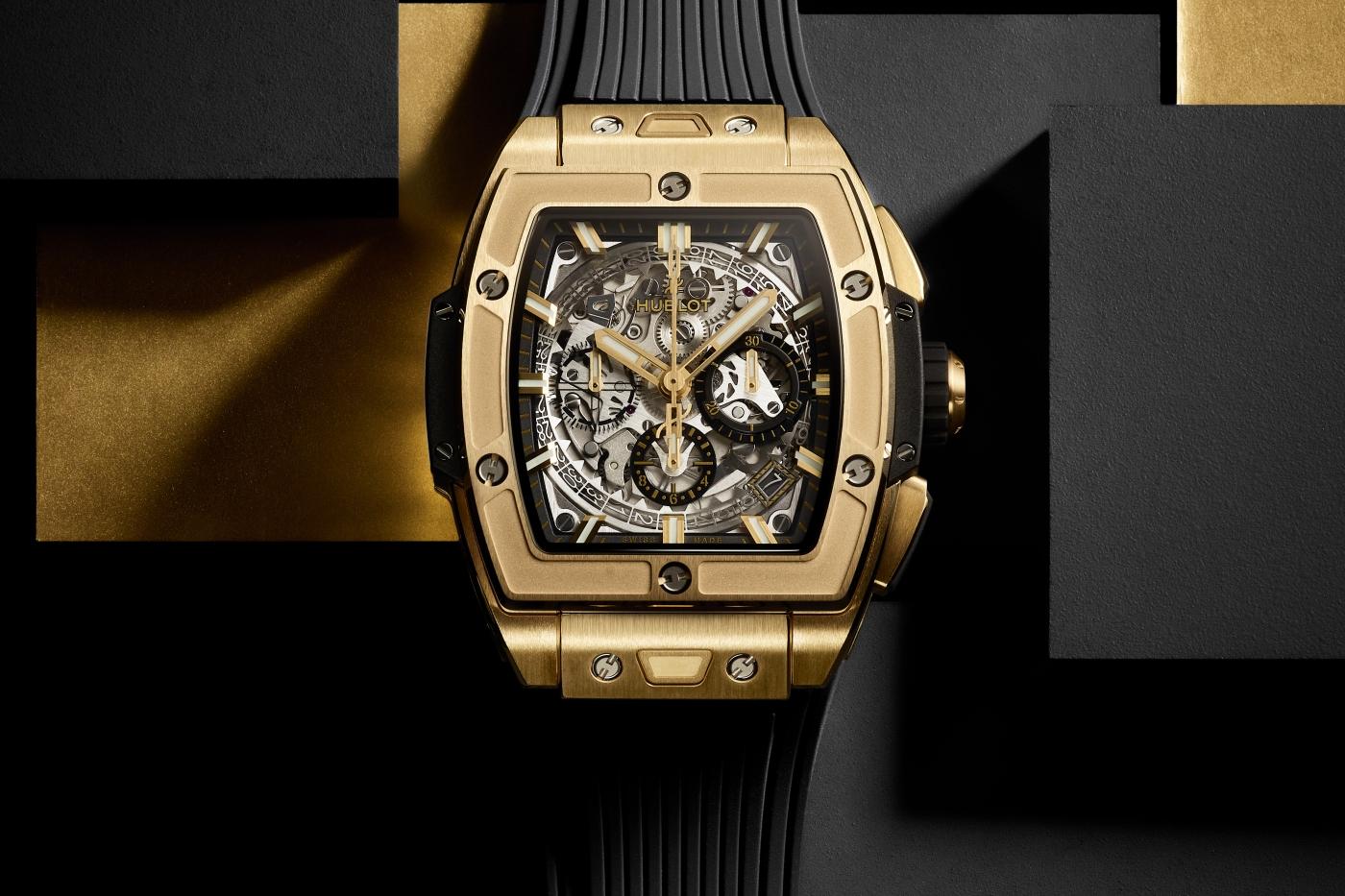 Returning now to the Big Bang name, we have the quirky-looking Spirit of Big Bang. I’m not sure how to view these models, they don’t do much of me personally, but it is nice that they don’t entirely follow the porthole design that Hublot’s watches typically revolve around. The watch’s tonneau-shaped case does include the One Click system for quick strap changes, though.

It also features Hublot’s HUB4700. Interestingly, this is also a bought in movement, but it’s been made by Zenith. The base movement is the El Primero 400, which has also formed a base for movements by TAG Heuer and Panerai in the past. Hublot has skeletonised the movement for our viewing pleasure, too. As it’s a Zenith movement, it has a 5Hz beat rate rather than four and features a 50-hour power reserve with a column-wheel chronograph.