I just recently became aware of the new brand Areion Watches when it’s owner reached out to let me know about his new endeavor.  This year has seen quite a few brands popping up in the UK – let’s see what Areion has to offer.

Many new brands start off with quartz movements, as they’re the easiest to source and get built into a watch – not to mention they help keep things more affordable.  Many times, those movements will be simple three-handers, perhaps with a date display.  Areion has upped their entry a bit, and are instead offering a chronograph, driven by the nice Miyota OS20 movement. 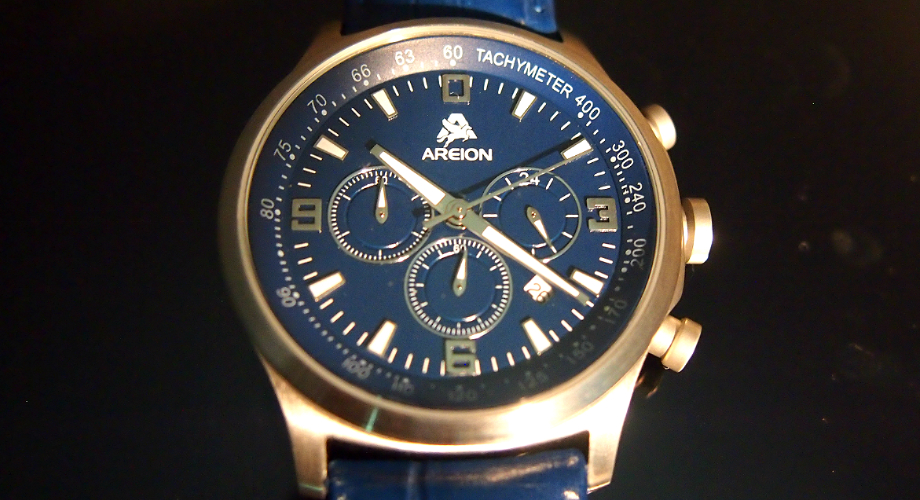 This is encased in a 42mm stainless steel case (22mm lugs; 13mm height), which offers a nominal 50m water resistance rating.  Of course, that means it will withstand the occasional splash from the sink or if you get caught out in the rain, but this isn’t one you should expect to go swimming with. 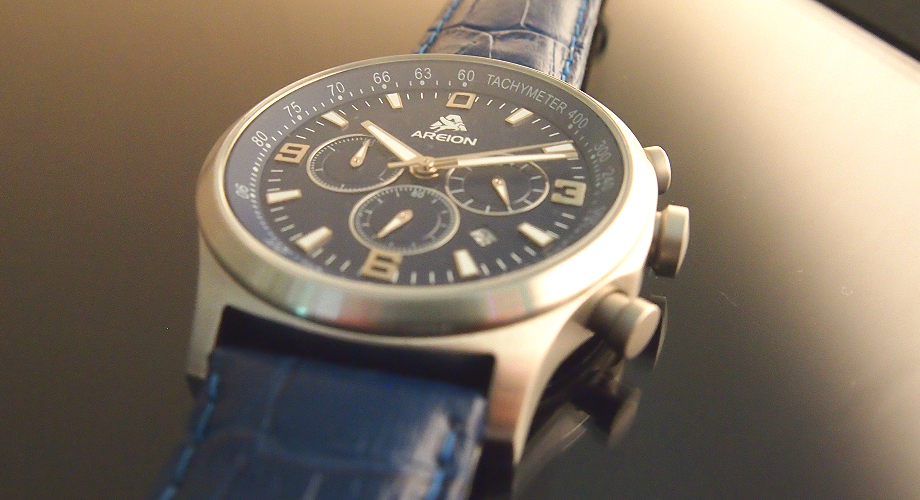 With any new brand, movements and functionality aren’t all there is to the picture.  We must absolutely consider the styling they’ve utilized.  While they could have opted for a simple flat dial, Areion has instead gone with something that has a nice bit of layering to it.  The indices and numerals are raised, and the registers are slightly sunken.  This gives some nice visual variety to the dial, breaking up what otherwise could have been a flat plane. 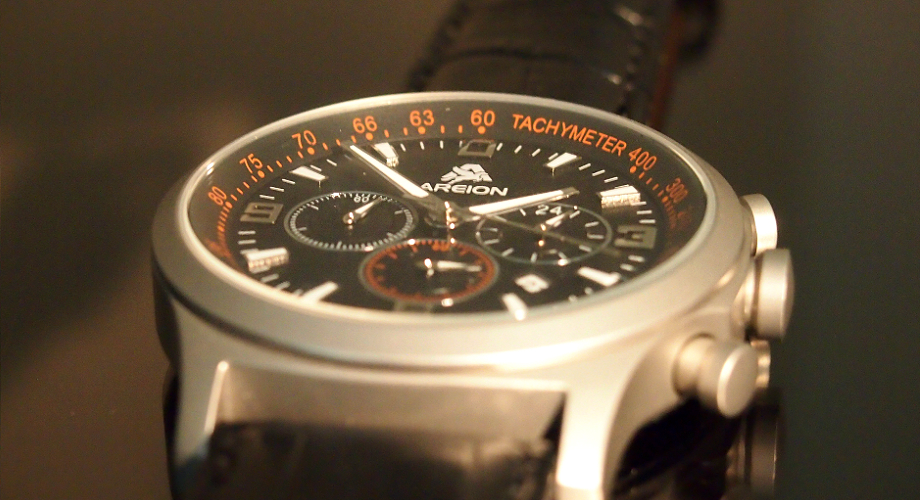 Oh, and on those registers (in case your not familiar with the OS20) – you have the subseconds at 9 o’clock, chrono minutes at 6 o’clock, and a 24-hour indicator at the 3 o’clock position.  While the 60 minute upper limit on the chronograph is smaller than we might expect, it should be rather adequate – I’ve found timing anything for greater lengths of time, I often forget (with an analog chrono) what time I actually started timing things. 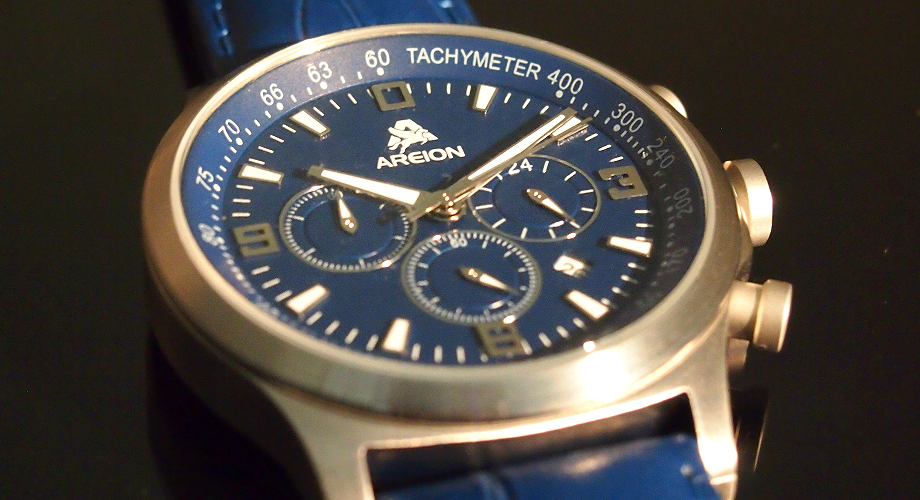 I’m also glad to see the 24-hour indicator here on the watch.  While it’s not as critical with a quartz (whereas with an automatic you may have to reset things with some frequency), I do like to see the 24 hour indicator (if I can’t get a true GMT complication), as I just find it to be a useful piece of information to have. 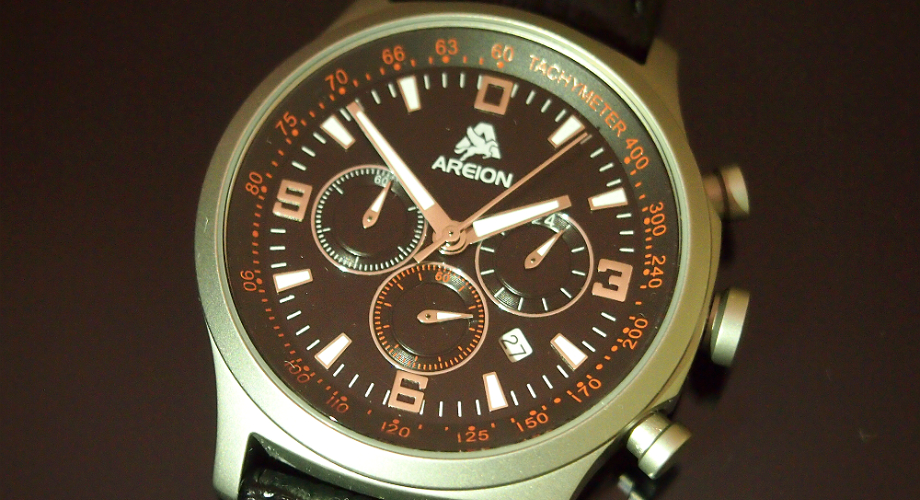 I’m also glad to see a reasonably-sized handset utilized here.  It’s a sort of cross between other styles of hands I’ve seen, and gives it a sort of modern take on what we’d more commonly see, without being too wild of an experiment.  They also have a nice surface for the lume to be applied.  One thing that’s not quite as great is the date wheel.  It looks just fine with the white dial, but it’s white background stands out a bit too much on the blue and black dialed models.  Hopefully future iterations will see a color-matched wheel entering the mix.

Introducing The Cyrus Klepcys DICE For Only Watch 2021 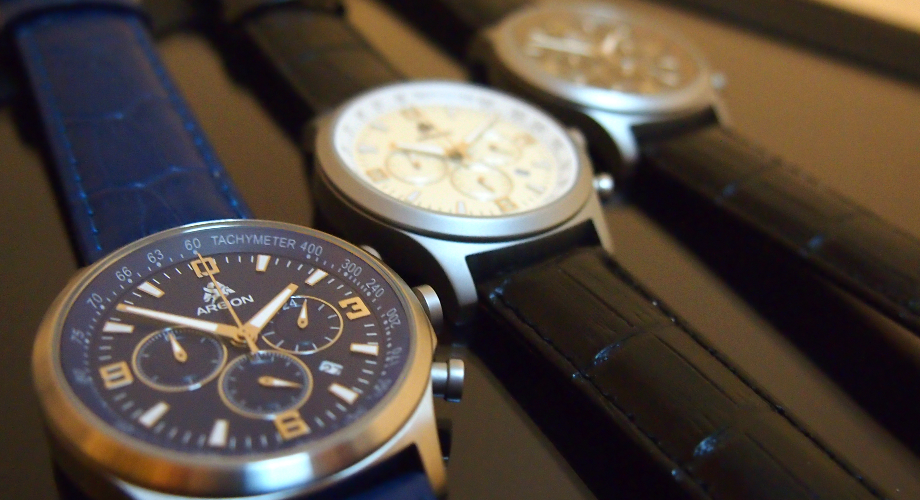 Then again, things like date wheel color are relatively minor concerns.  Coming in at a price of around $300 (£180.00) plus shipping, they’ve very much positioned themselves as an affordable alternative to what else there may be on the market.  While the design itself isn’t anything ground-breaking, it does seem nicely executed, in my opinion.  And opinion is one place you can actually help out this new company.  Let us know here in the comments what you think of the watches they have on offer, as well as the design of the webiste – they’re very interested in your feedback.  http://www.areionwatches.com/

A database and analytics/BI developer by day, Patrick first began taking a deeper interest in wristwatches about five years ago, and has been writing about, and reviewing, wristwatches since 2011. You can find Patrick’s work on aBlogtoWatch, WristWatchReview, DreamChrono, and EngagedMarriage.

And, as a counter-point to Jovan, he’s a huge fan of The Dark Knight/Batman.