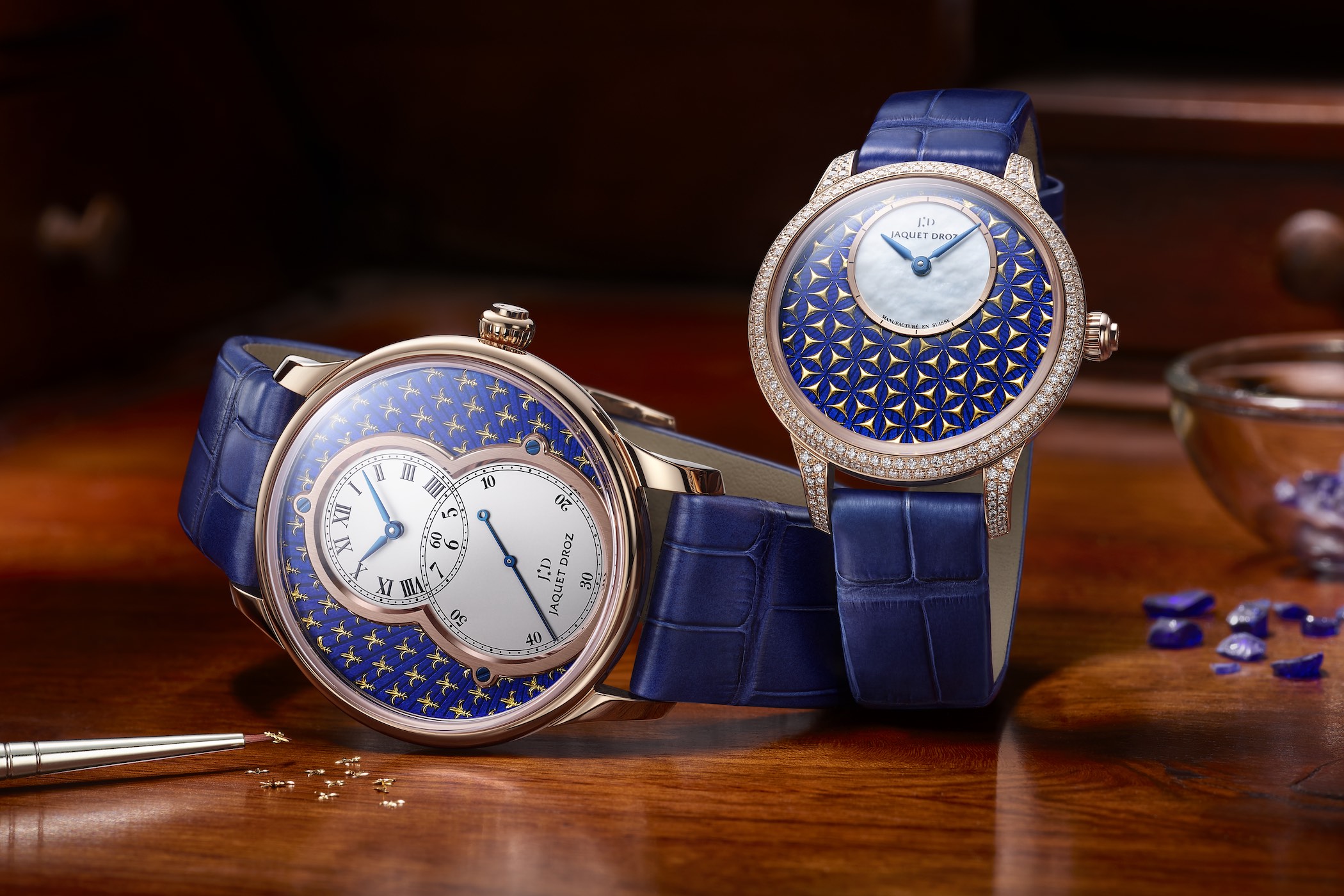 The art of enamelling is a tricky one, indeed. It requires skill, patience and finesse, and a lot of resources too. Jaquet Droz has been making enamel parts for its watches since the 18th century, but it was only in 2011 that the brand began using the pailloné for its creations. A translucent coloured enamel is painted over an engraved gold dial by a skilled artisan before being baked in an oven. This 19th-century technique is employed by a few brands including Tiffany & Co and Van Cleef & Arpels, as well as Jaquet Droz of course.

Jaquet Droz’ use of enamel is brave. It’s an exact science, and there are plenty of things to go wrong. Consider that most of the dials produced in a batch will be flawed in one way or another, with this flaw being random. All of those dials cost money to produce, regardless of whether they’re used or not. Now we get to see why enamel is a rarity. Jaquet Droz uses two different patterns to liven their enamel dials up. The larger model sports the Fleur-de-Lis (lily flower), while the smaller one is decorated with the Fleur-de-Vie (flower of life). The patterns are painstakingly applied to the blue enamel by hand using tweezers and the dexterity of a brain surgeon. Each gold decoration you see on the dials is, essentially, gold leaf that’s been punched out of a thin sheet of gold with a unique tool. In the same way a sniper holds their breath when ready to take the shot, a lot of the artisans at Jaquet Droz have admitted to holding their breath when applying the gold to the dial to stop their hands shaking.

All this hard work on the dial doesn’t mean the rest of the watch has been made on a budget. The back of the watch showcases the automatic 2663.P calibre in the larger Fleur de Lys Grande Seconde Pailloné (which has a 43mm red gold case). In the smaller Fleur de Vie Petite Heure Minute Paillonè (which has a 35mm red gold case), you’ll find the 2653.P calibre. Both of these movements have a 4Hz beat rate and a 68-hour power reserve. The 43mm Fleur de Lys watch will cost CHF 43,200, while the 35mm Fleur de Vie will cost CHF 45,900 thanks to its bezel which has 1.23 carats of diamonds in it.