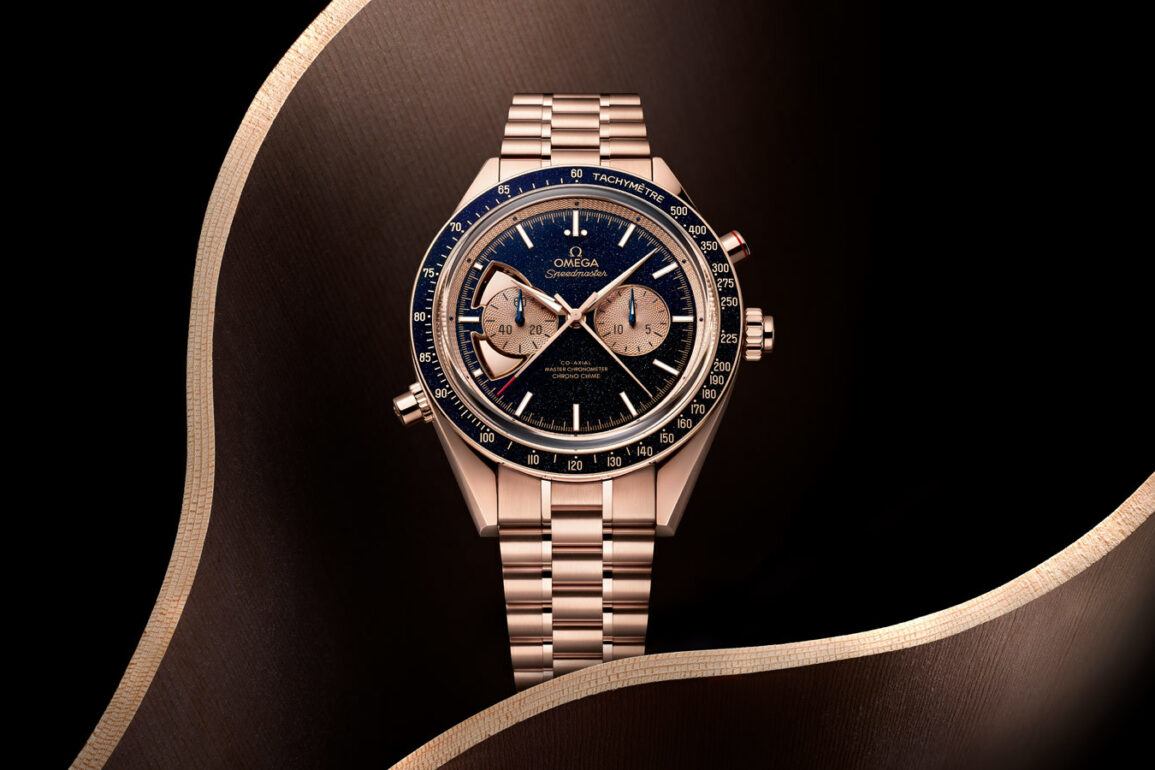 Omega re-enters the world of haute horlogerie in the best way possible.

Omega news this week, it’s been a while since we’ve had something brand new to share with you all. You may know of Omega as producing watches that share retail space and compete with Rolex and Breitling, and that’s true, but Omega occasionally steps outside of its comfort zone to offer us something utterly different from its usual range of wristwatches. These examples of Omega’s hair-brained ideas include the featherweight 55g Seamaster AquanTerra Ultra Light and the De Ville Tourbillon. The latter is an example of the work done by Omega’s Atelier d’Excellence (also maker of the current 321 calibre), and it’s this skunkworks in the Omega foundry that’s created the new Speedmaster Chrono Chime, one of the coolest Omegas around.

As you might’ve gathered from the name, this is no ordinary Speedmaster, not by any means. The calibre 1932 inside it isn’t based on any of the self-winding or manually wound movements that Omega uses in the other Speedmaster watches, oh no. The 1932 calibre was co-developed with Omega’s Swatch sister brand Blancpain, a maker of many fine and complex pieces. It required over 5 years of development and has no less than 17 patents for its design. 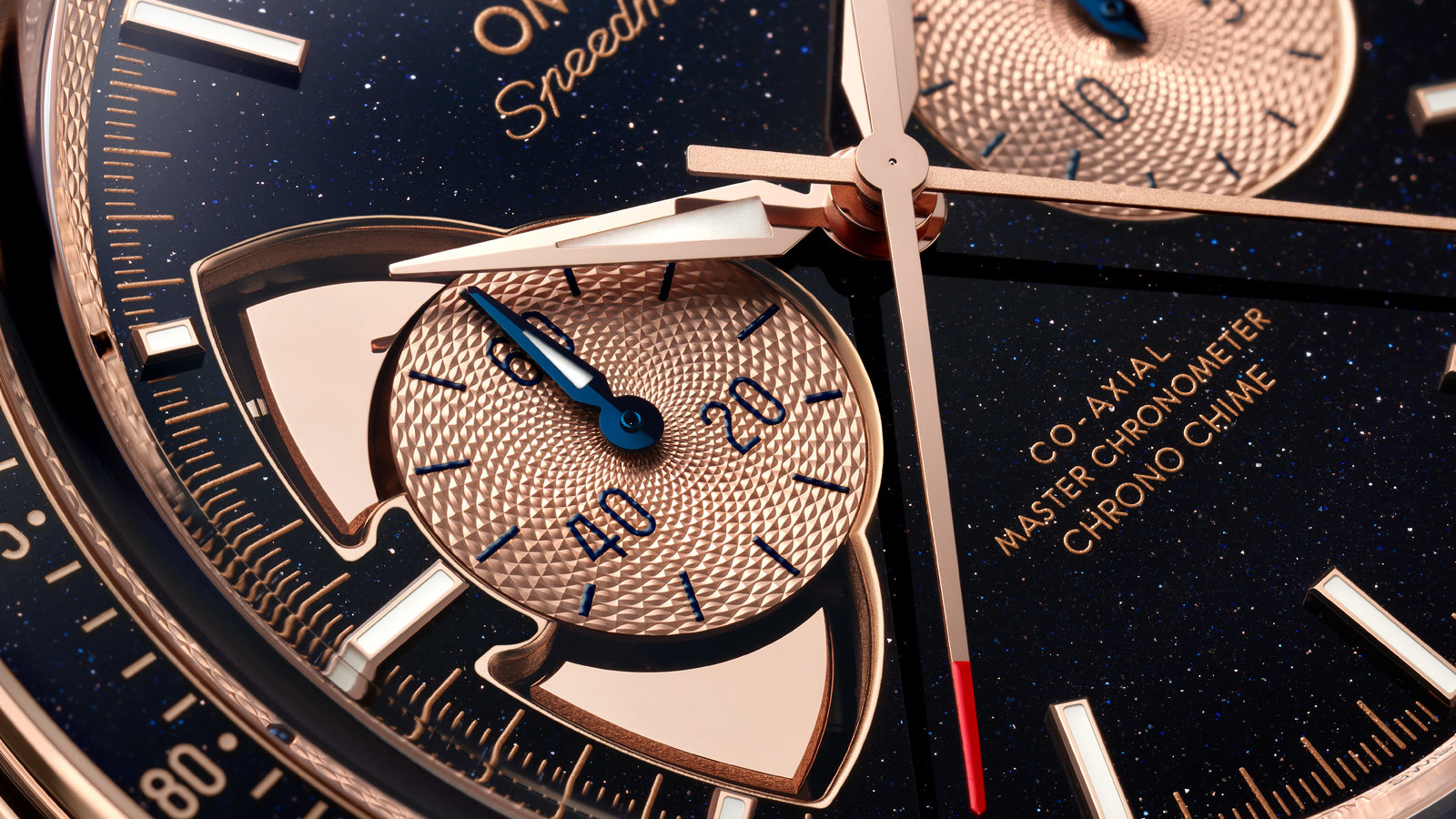 First and foremost is the escapement of the movement. Omega wanted the new chronograph to be able to time to 1/10th of a second. This is the same as Zenith’s El Primero calibres and is achieved with a high-frequency beat rate of 5Hz. The issue here was that when Dr. George Daniels developed his Co-Axial escapement, which Omega now uses, he didn’t design it to run at this rate, which meant that Omega had to go through the entire design and upgrade it and the components within to operate effectively. 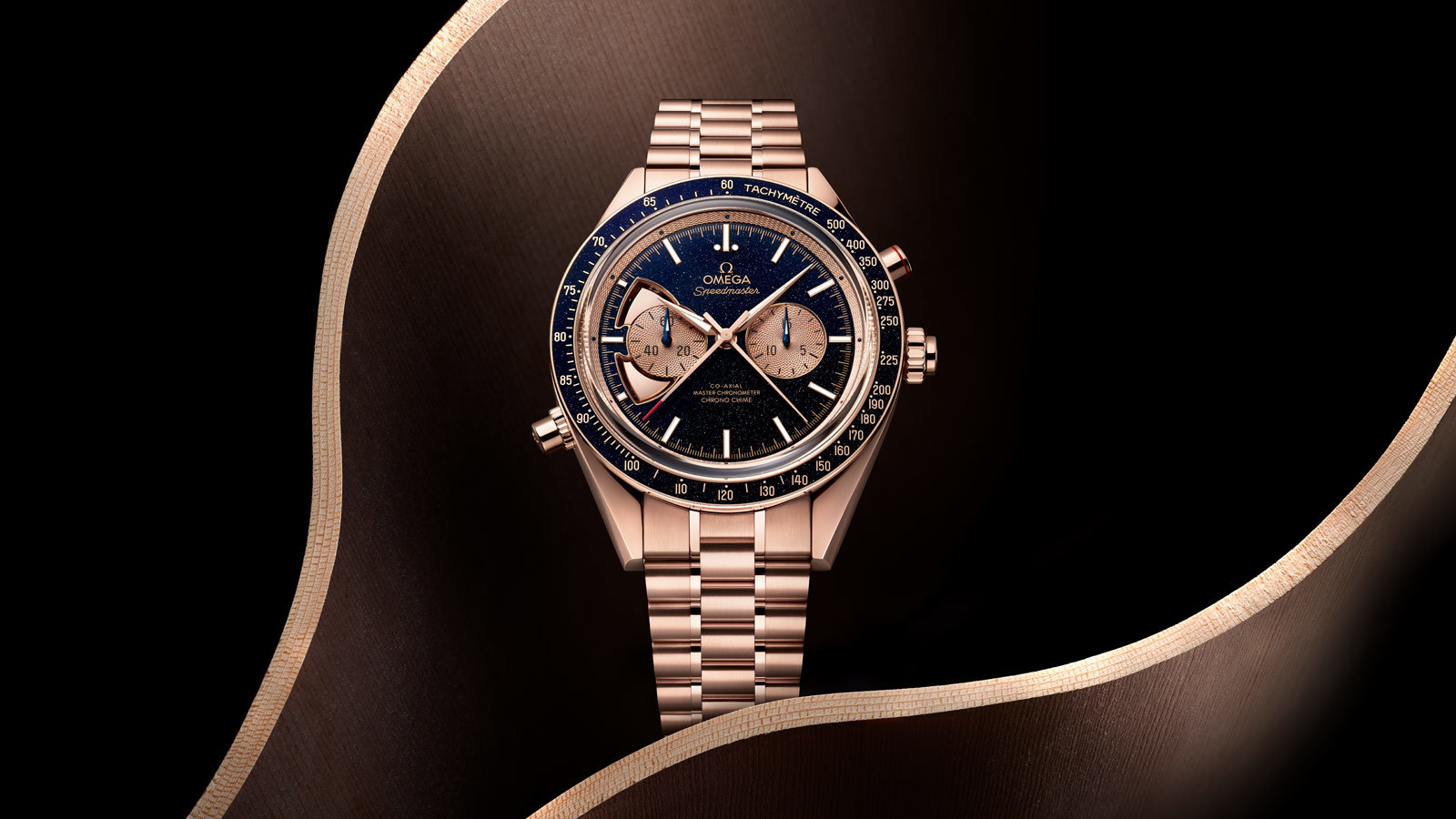 Next, there was the minute repeater. Omega has made these before, but they’re extremely rare in the model range as, I suspect, their sheer complexity and the price which comes from that means they’re not an easy and profitable sale. Nevertheless, a minute repeater is here, and it’s no ordinary one either because, unlike every other minute repeater I’ve ever seen, it doesn’t read the time from the wristwatch itself. 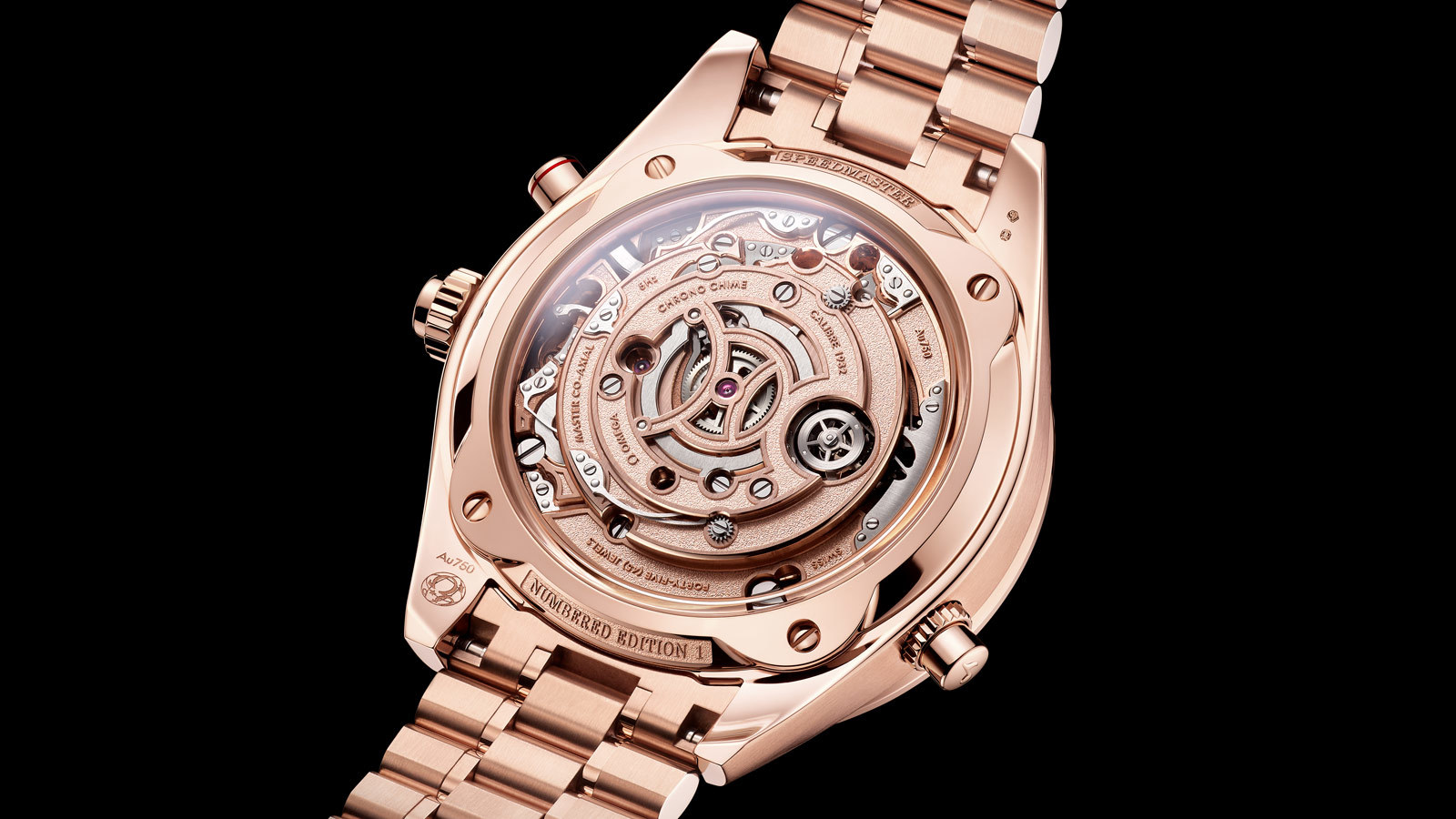 Bear with me on this. The final complication is a chronograph with a column-wheel controller and vertical clutch, which means the chronograph can be run pretty much forever with no risk of damage (lateral clutches look prettier but can have issues with the meshing of their gears, this is an inherent problem with them). Further, the chronograph also has a rattrapante (split seconds) function, meaning it can time two events simultaneously for a while. It’s also a monopusher chronograph. Now, back to the minute repeater. Instead of reading the time from the main hands of the watch, the minute repeater reads the elapsed time from the chronograph while it’s running, right down to the second. That means the minute repeater can read out the time in 15-minute intervals, followed by ten seconds and single seconds. The solid 18k Sedna gold hammers are visible on the dial as well. Oh, and this movement is a Master Chronometer, resistant to 15,000 gauss. This is all activated by the pusher at 8 O’clock, while the chronograph is operated by the pusher hidden in the crown and the pusher at 2 O’clock activates the rattrapante. 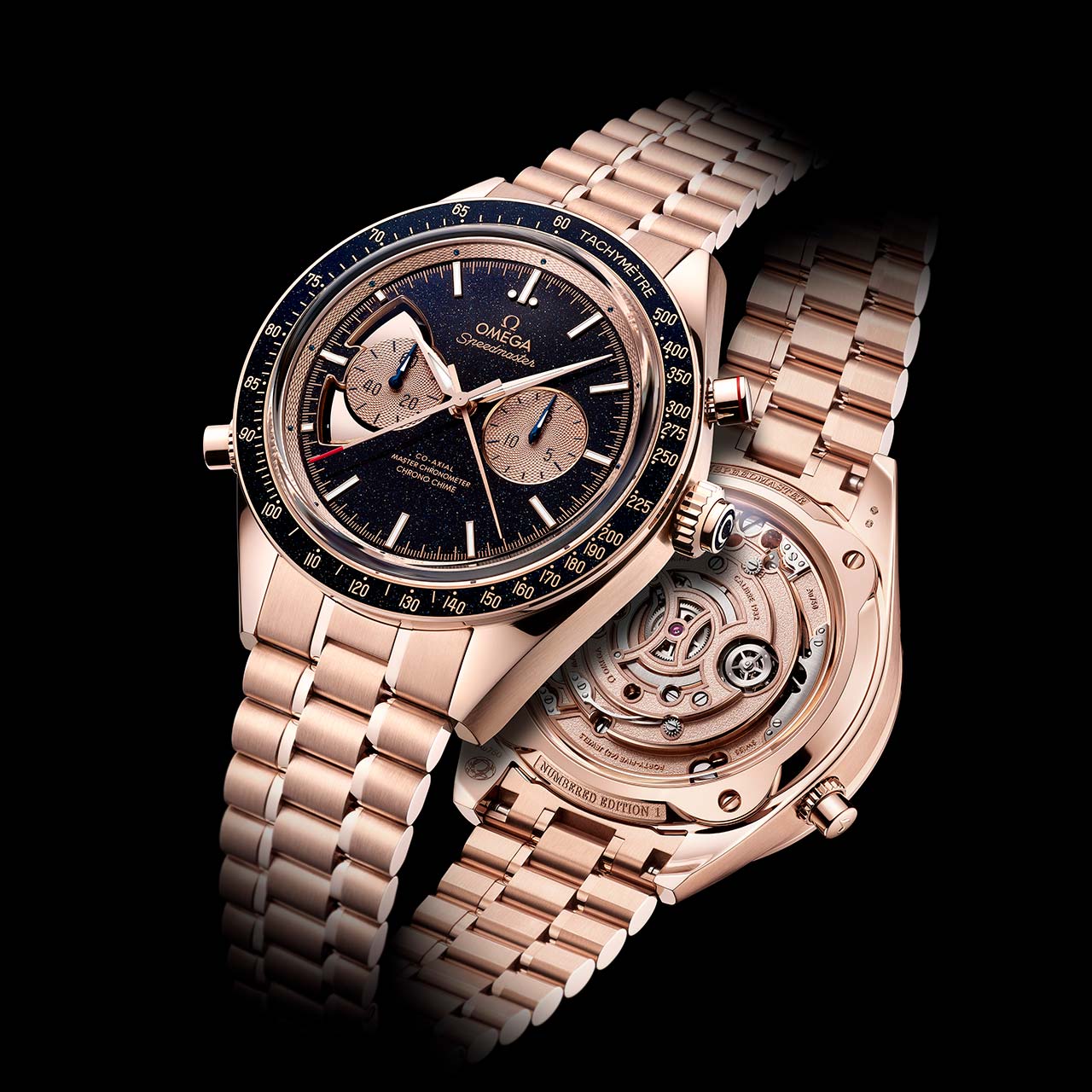 Most of this complication isn’t visible through the caseback, I’d imagine the sheer complexity of it all means it needs to be neatly integrated, especially for that minute repeater. Still, there are plenty of gold bridges and gold detailing around the back to keep you enchanted.

Around the front is the blue aventurine Grande Feu enamel dial with 18k Sedna gold subdials, applied markers and hands. There’s also some lume there so you can read the time at night. I’d imagine it’s fairly easy to read given the solid 18k Sedna gold case (with Sedna gold bracelet) is 45.5mm x 17.3mm, and you can bet that this size has come from the movement. Water resistance is 30m. 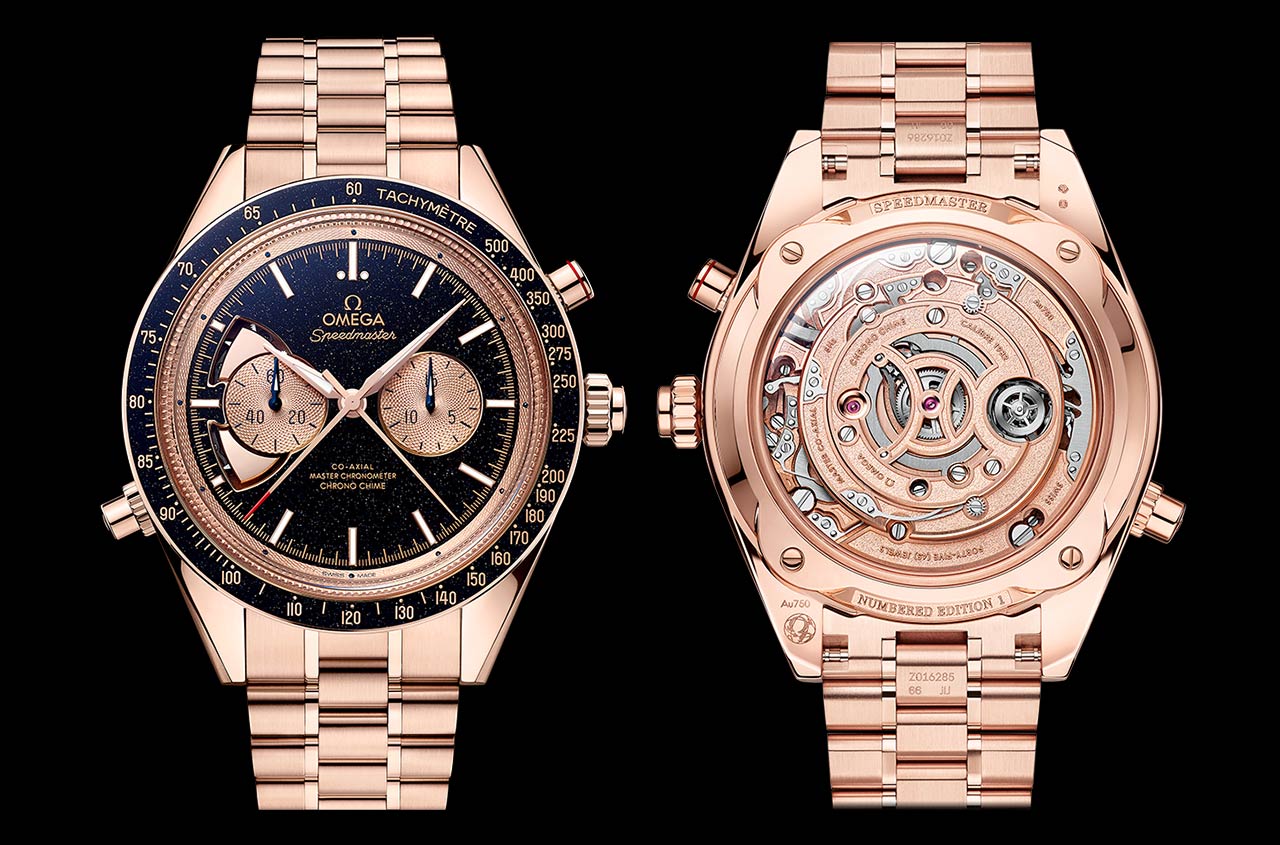 Omega ships this with an enormous walnut box (quite rightly so) with a spruce resonance plate to make the watch chime more clearly when not on the wrist. It also has a loupe, a storybook and a travel bag. The price is set at $450,000, but Omega also made a version for the 1932 collection, which is a bargain at $420,000. There are no apparent limits to the production of the calibre other than its sheer complexity and hand assembly. For those wondering if Omega had lost the plot for working on the Swatch Speedmaster thing, here’s your haute horlogerie fix.