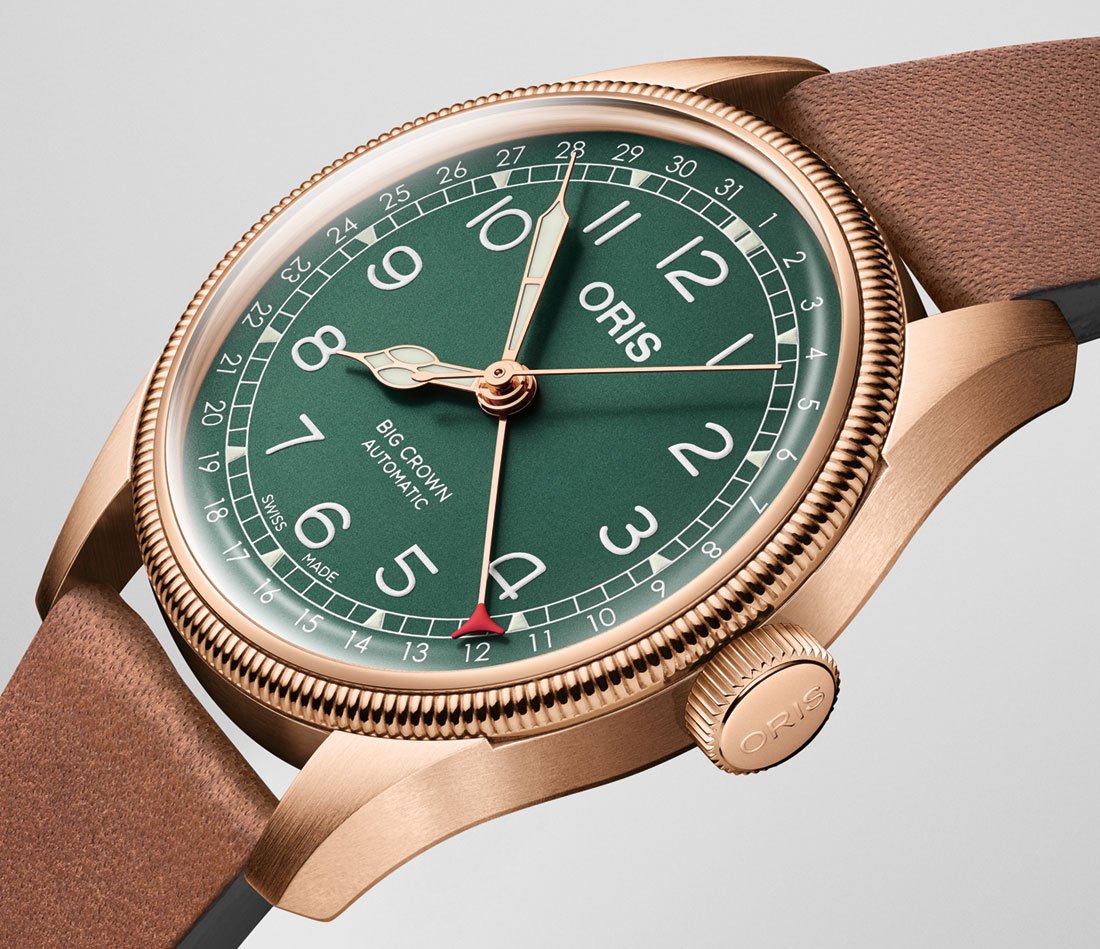 It might not be the first thing that comes to mind when we think of Oris, but the pointer date complication is certainly one of the brand’s most important collections. That’s why the brand is celebrating the 80th anniversary of the first Pointer Date (1938) with a Big Crown bronze edition. This is a significant anniversary year for Oris and we have already seen a number of various Pointer Date models including the bronze and stainless steel editions commemorating various partnerships like the gilt-dial for the Movember foundation.

For a bit of trivia, the pointer date is actually the original indication of a date complication on a wristwatch ever. A. Hammerly from La Chaux-de-Fonds invented it in 1915 and quickly patented it. Afterwards, the traditional recessed rotating date disc displayed through an aperture in the dial is now commonly used. Later on, after 20 years, Oris would introduce the first watch using the complication and starting off 80 years of the production line that survive even the quartz crisis. 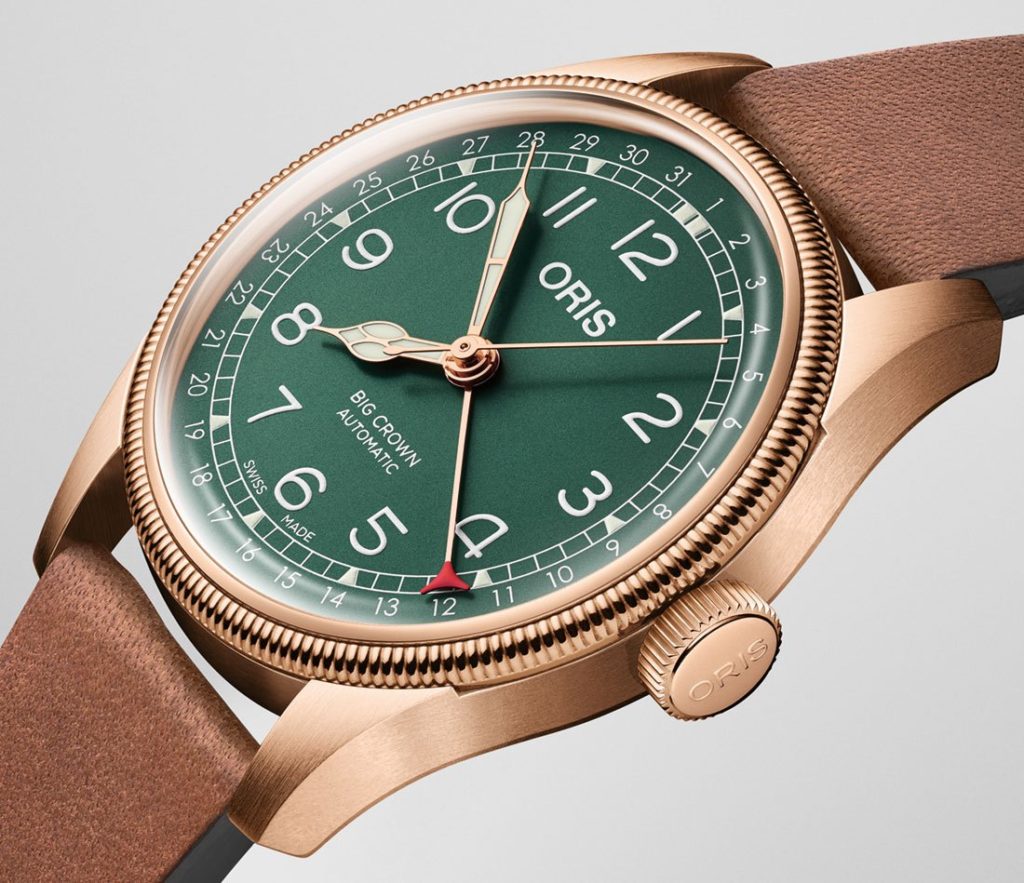 The symmetrical dial of the Oris Pointer Date interests the modern purist who is not totally over the traditional convenience of functional date display. More so, the new Oris Big Crown Pointer Date differs from the Baselworld model earlier this year by using a 36mm bronze Pointer Date with a milky green dial. Nonetheless, the Baselworld model is important because it marked the first time Oris made a bronze case available in a non-limited release. This is somehow continued with the 80th Anniversary edition of the watch with a new British racing matte green dial, a red-tipped date indicator, and a bit larger 40mm case. Now the 40mm is a welcome change for most of us. 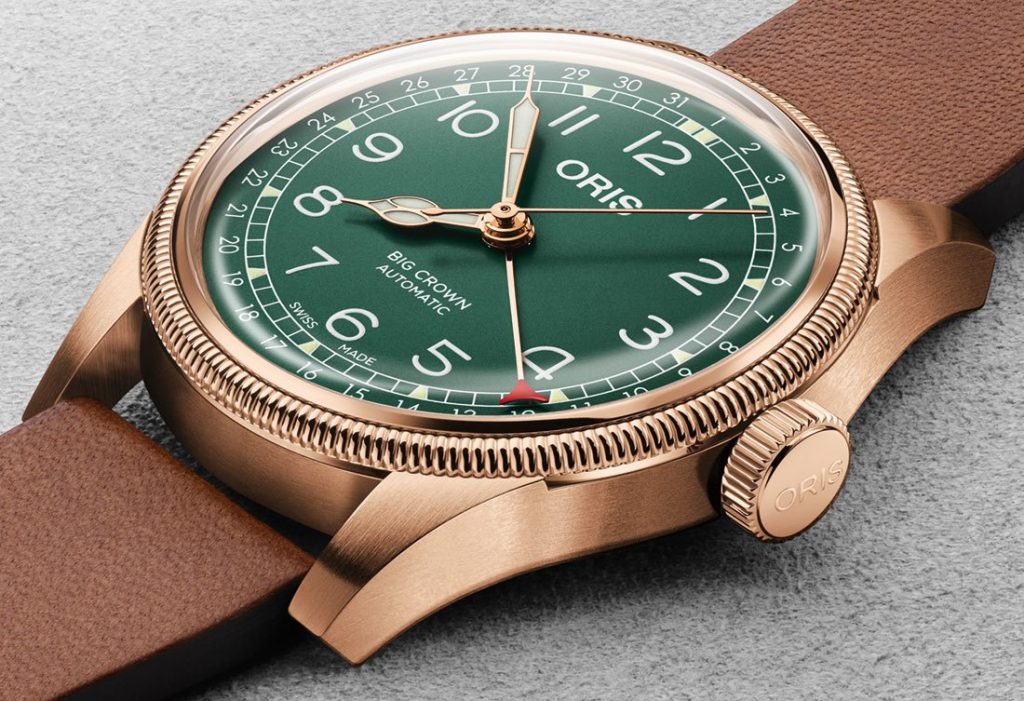 Bronze has been used by Oris in various watches already while some brands normally use it for special releases. Oris starting with the successful Carl Brashear 3-hand Diver 65 three years before the bronze craze. The Pointer Date is of course far from a marine watch where bronze applications are typical but in a sense, the watch is water resistant to 50 meters and what I like is the worn-in looks of the bronze tones that echo vintage-style aviation watches. The design of the Pointer Date is definitely classic following the early Big Crown pilot watches some of which are in gold though. 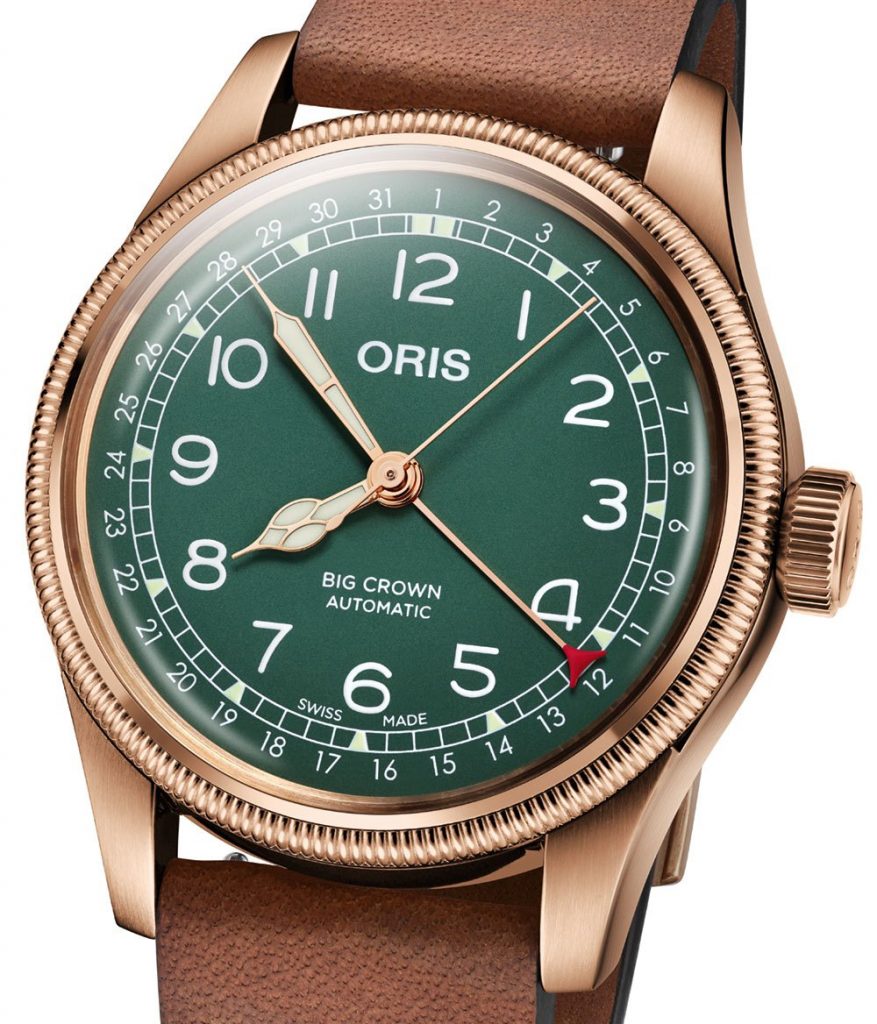 Powering the 80th Anniversary of the Pointer Date watch is the Oris 754 automatic movement that uses a Sellita SW200 base. This is a manual hacking movement. The crescent-shaped date indicator quick-adjusts just like any other date wheel. Power reserve is at modest 40 hours at a 4Hz frequency. The asking price of the 80th Anniversary Bronze Pointer Date is $2,000 USD which is not really premium considering the special release. It is not more than its production bronze variant so this is somewhat surprising.

Finally, what wins me over is the cool bronze material similar to divers and the 40mm case dimension. Visit Oris here.