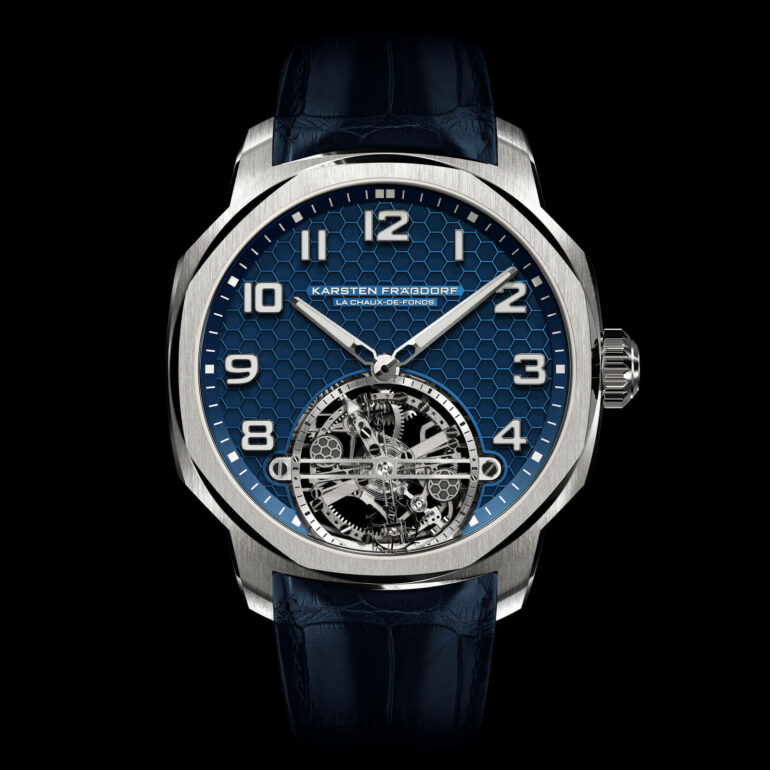 Today, we are looking at an intriguing new watch from an independent watchmaker. Independent watchmakers (Indies) often hold a special place in the hearts of watch fans and collectors worldwide. They can often pore over every detail of a watch in even more meticulous detail than the big names in watchmaking. This means that indies are often seen as higher up the horological ladder than the established big names and can also charge more money for it.

One of the most intriguing names in the game is Karsten Fräßdorf, a maker of bespoke watches for clientele ‘in the know’ about small indie watchmakers. Karsten Fräßdorf’s signature design revolves around the hexagon, but apart from that, his watches are pretty much open to the client’s artistic interpretation. That is, you can customise it as much as your wallet will allow.

The latest piece in the Montres KF range is called the Karsten Fräßdorf Montres KF Bespoke Only EI8GHT. Long names aside, this piece is simply stunning. The dial features the honeycomb pattern that Fräßdorf is known for. You see in the photos only a small window into the realm of possibilities with this watch. Fräßdorf will happily use any colour you like on the dial, and if you can’t think of a specific colour, then Fräßdorf can use natural stone for the dial instead. 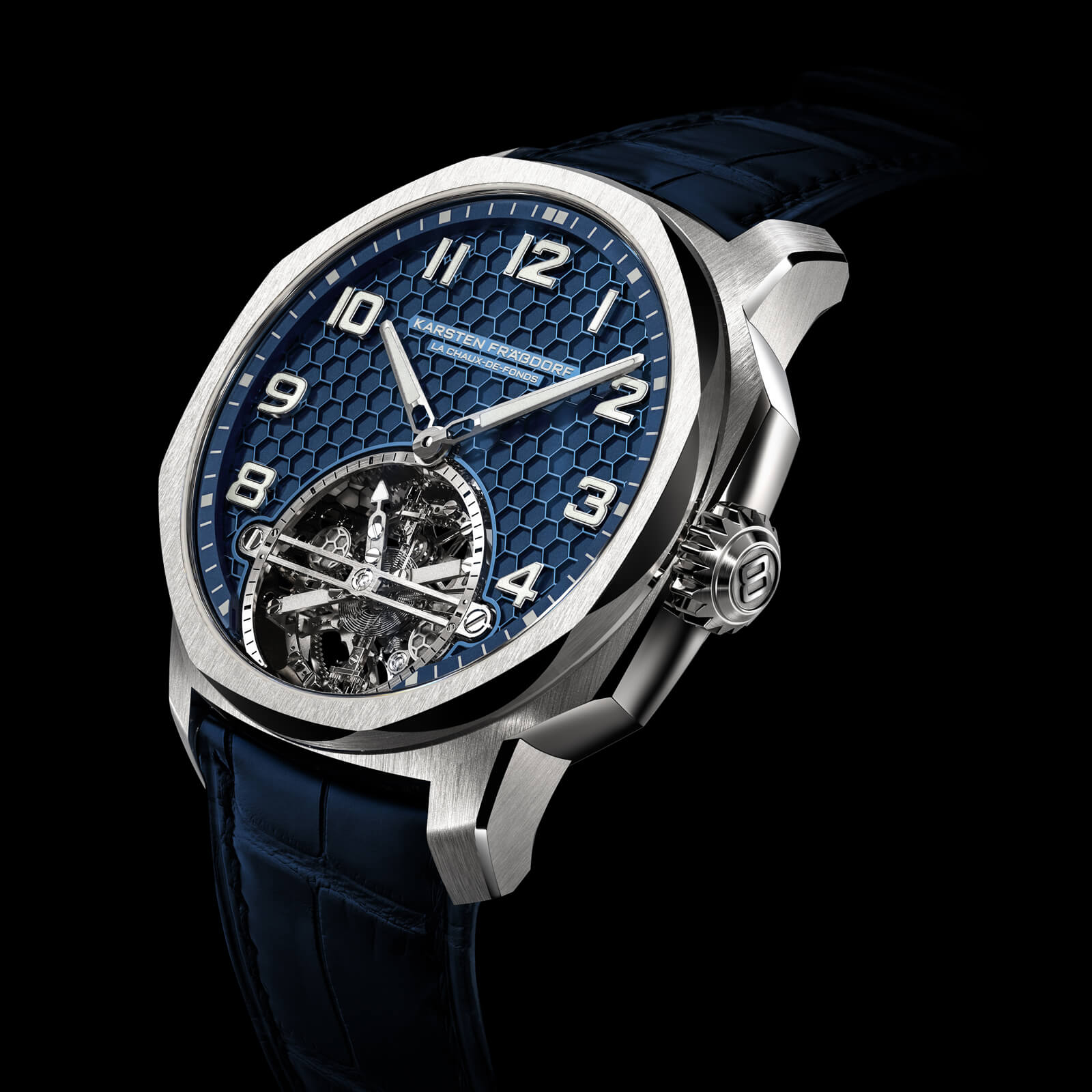 Customisation is the recurring theme of the EI8GHT. For example, you can have an engraving of your choice on the balance studs (within reason, it’s not a vast area to engrave), you can have something of your choice implemented onto the crown if you didn’t like the ‘8’ symbol that’s already on it. I wouldn’t be surprised if full engravings of the 44.5mm x 12.2mm case weren’t possible either. Or, if engraving isn’t your thing, you might find gem-setting to be more up your alley. 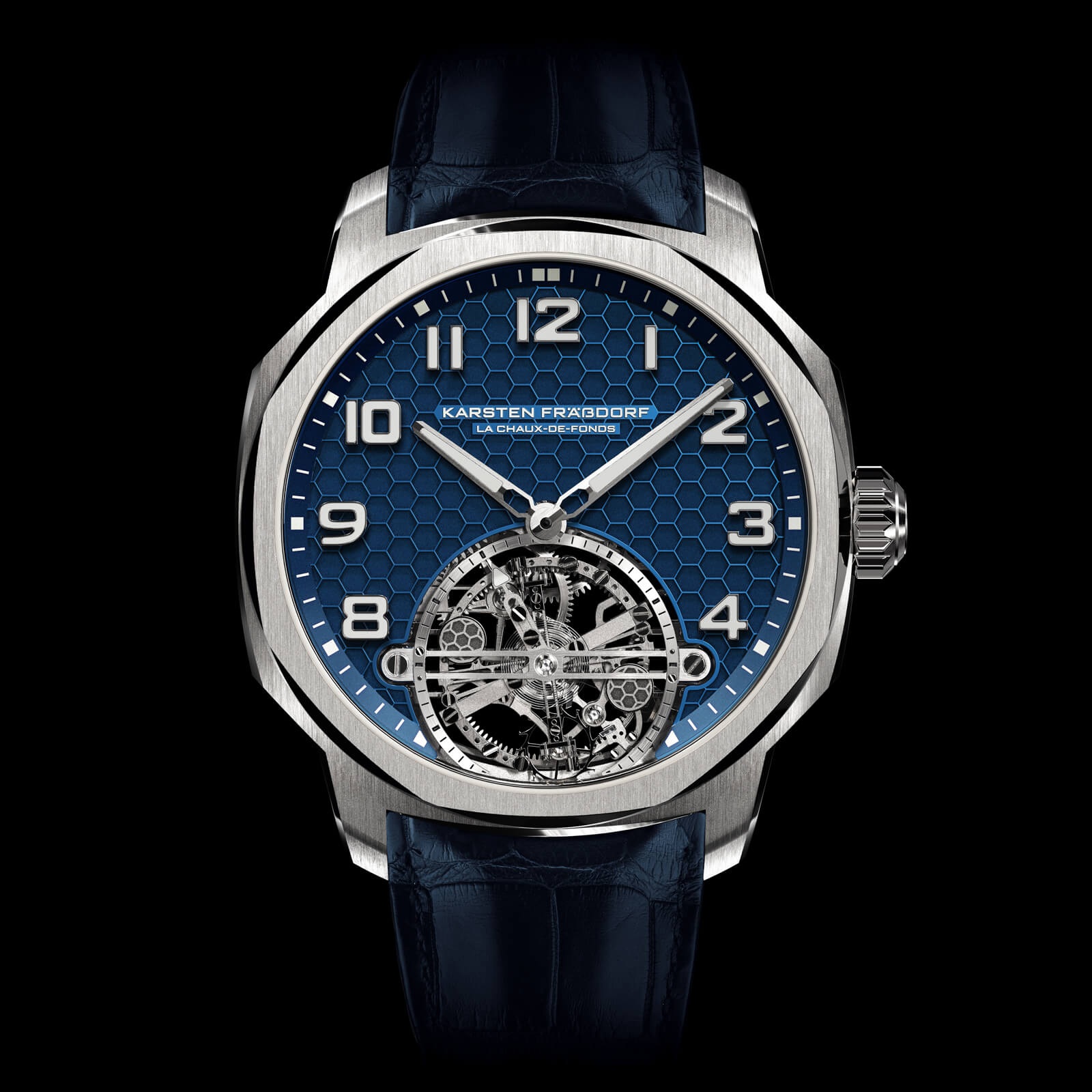 The watch’s case may seem large to you, but you need to remember that it requires a considerable budget to research and design smaller cases and components if you don’t already have plans for that sitting around in an attic somewhere. This same issue proved difficult for the folks at A. Lange & Söhne when it came to their most complicated of watches. I feel it would be unfair to dismiss the EI8GHT based solely on its dimensions. This is something that will require a more in-depth investigation. 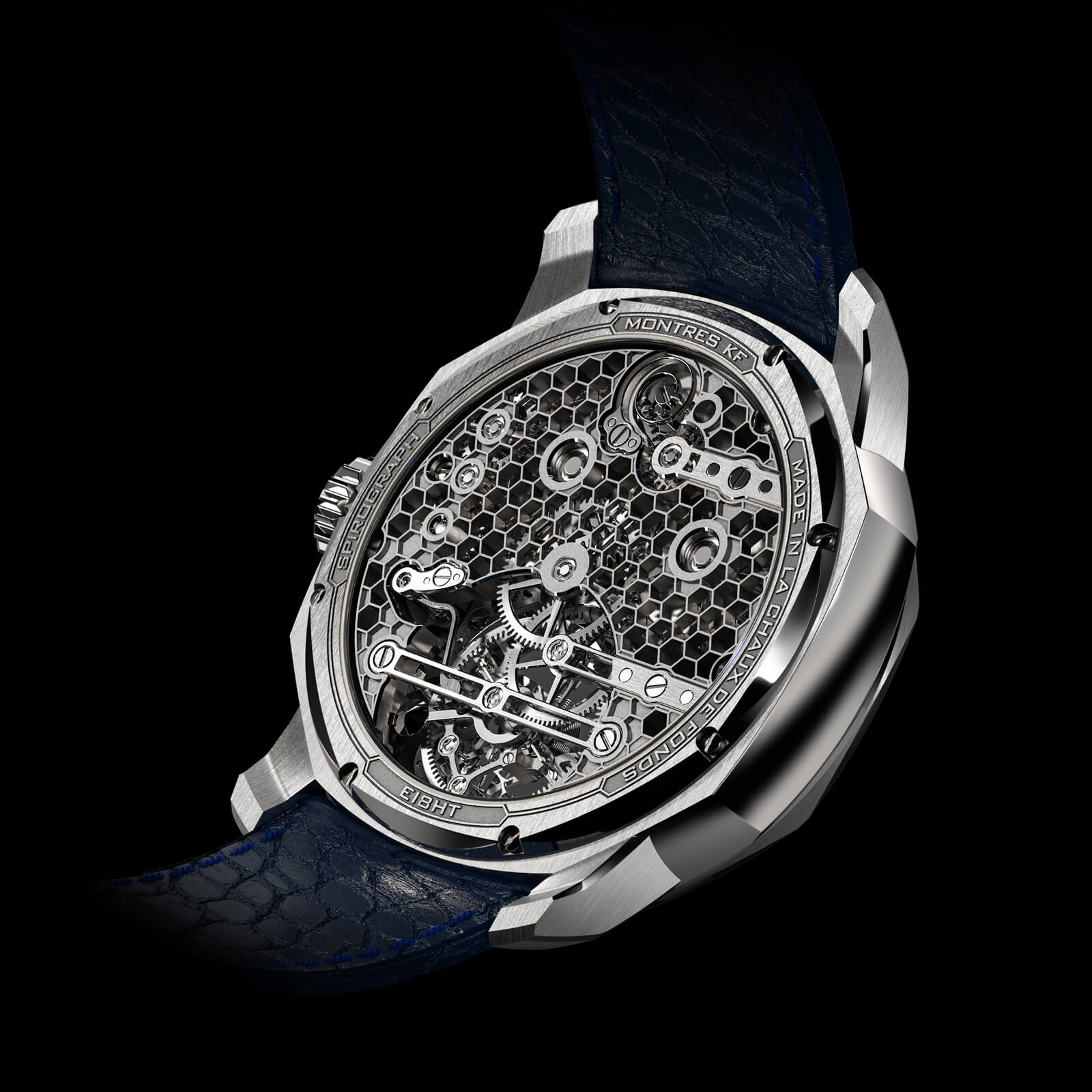 Inside the EI8GHT is a bespoke machine created by Fräßdorf for this watch. The Novamag® Calibre 01 features a unique adjustment system for the balance called a Spirograph® which has no less than three patents applied to it. The watch’s main attraction is the one-minute tourbillon which can be seen at the 6 o’clock position on both the front and the back. It’s a one-minute tourbillon, a tourbillon that performs one rotation per minute to avoid the effects of gravity on the balance wheel (whether this applies in wristwatches is debatable). It beats at 2.5Hz, and the balance spring features a Phillips external curve and a Grossmann internal curve. These both improve isochronism, that is, the duration of the swing the balance wheel takes regardless of the length of the swing (it’s a complex one, we’ll update the Lexicon with our definition soon.

The Novamag® Calibre 01 is hand-wound and features a total power reserve of 84-hours, although a stop-works mechanism prevents all of this being used. By using stop-works, the watch is only using the central part of the torque curve produced by the mainspring barrel. This is when power release is most consistent. That, in turn, makes for a more accurate watch over time, although this watch is not chronometer rated.

This movement features skeletonised honeycomb patterns to expose more of the back of the watch and if you ask nicely, I’m sure they can do something similar with the front. I like the fact that Fräßdorf and his team are so open to bespoke designs. They’ll let you make the refreshingly octagonal case out of different materials, and they’ll let you choose the strap, the type of clasp and even smaller details like the colour of the hands and markers. There’s also a 50m water resistance rating. 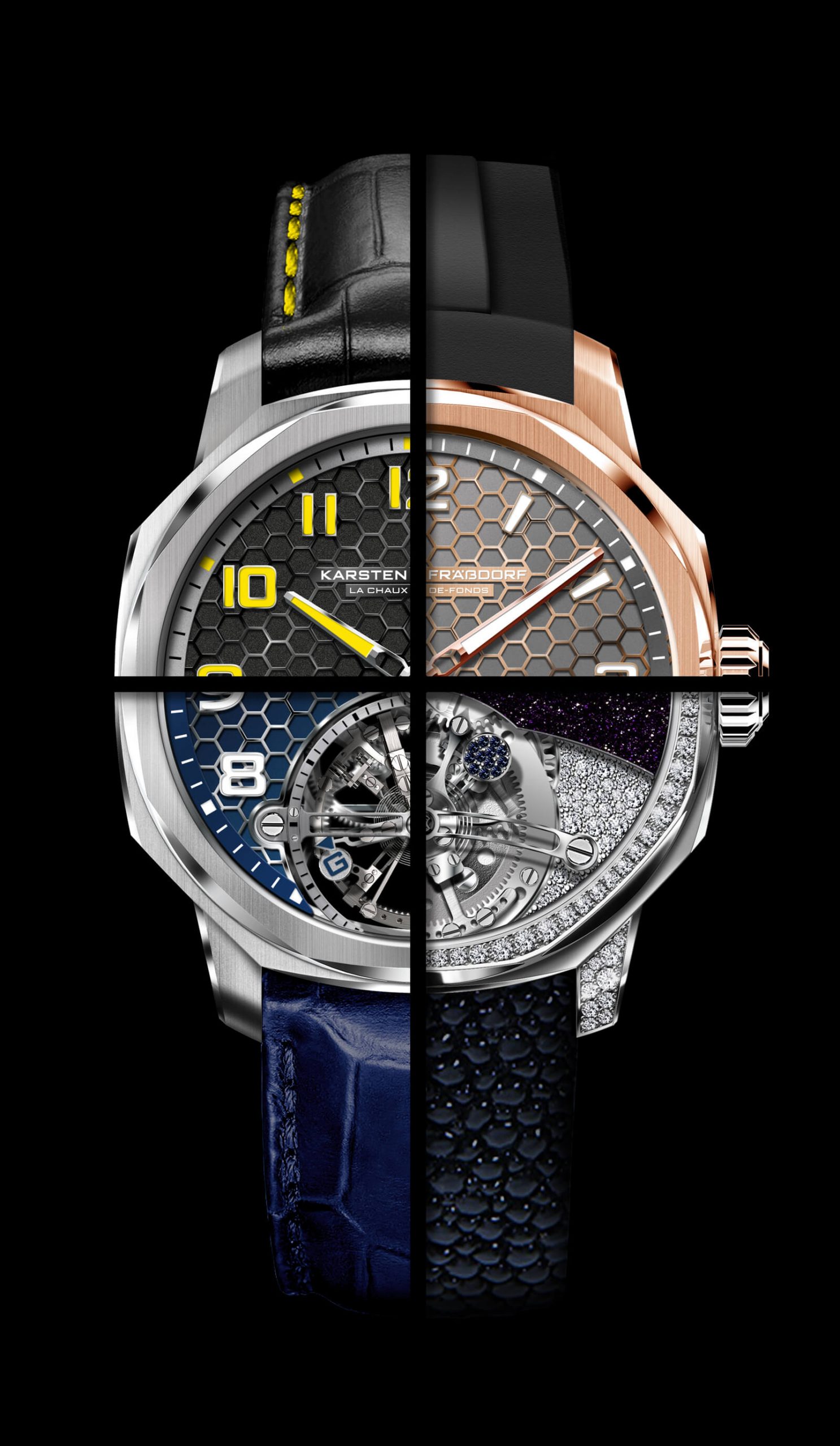 That bespoke ability, and the fact that 100% of the watch is made in or around La Chaux-de-Fonds, means the watch’s price starts at CHF100,000 and only increases from there. There’s no limit to the amount that could potentially be produced, but they are only made-to-order, so you won’t see one in any shop windows.