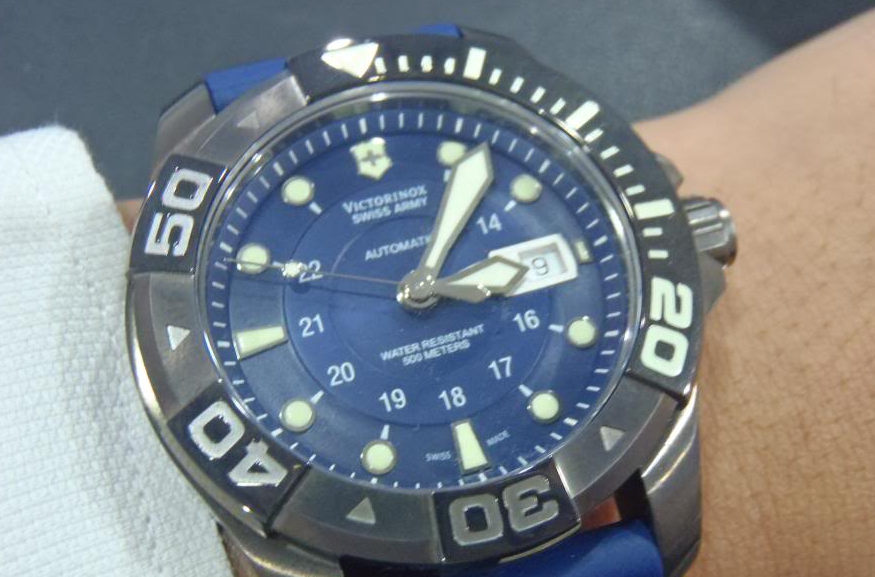 Victorinox is over a century old company, made famous by its folding penknives. In 1989, the company decided to try its hands on another important Swiss industry – making watches. For the last two decades, a number of notable watch designs were introduced.

One model that got me interested in this brand is the Dive Master. In 2012, I got myself the 500m Black Ice Mechanical in blue.

This watch has a diving capacity of 500 meters. Built to exceed the ISO 6425 standard for dive watches, this watch has been manufactured to such high tolerances that a helium escape valve is not deemed necessary. To top it all, it comes with a display case-back! Both the front and back glass windows are made out of sapphire crystals.

Instead of the using the standard ETA 2824 movement, Victorinox chose instead to use the ETA 2892.A2 which has a higher production specification than the 2824. Not sure whether Victorinox will be affected in the coming years as ETA starts to restrict the usage of its movements to other watch brands that are not under the Swatch umbrella.

A relatively large watch with a 43 mm wide casing (excluding crown). Made using the 316L stainless steel alloy, the casing is coloured black using the PVD method. Meanwhile, the crown is a screw-down and protected from knocks by two ridges.

Although the watch is a dive watch, some elements of an army watch has been added. Apart from the main indexes that are lumed, there is also an inner dial with numbering from 14 to 22 (the numbers 13, 23 and 12/24 were excluded due to lack of space).  The uni-directional bezel has numbers that have been cut into the metal but not enhanced – a form of camouflage perhaps.

An interesting element about this watch is the standard rubber strap provided. The strap is a 22 mm standard strap but with such thickness that you have to see to believe. What more surprising is the fact that it’s made in Switzerland.

The lume is not as good as what you can find on the Seikos though. Nevertheless, it’s adequate for the job at hand.

Overall, I would recommend this watch to anyone who wants a real value-for-money workhorse.