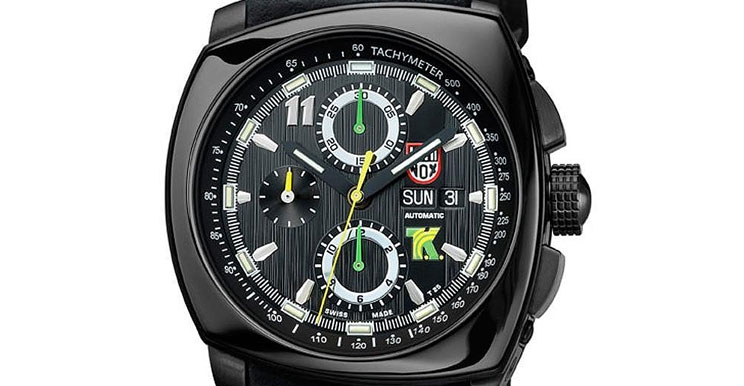 Luminox introduces the Limited Edition Tony Kanaan Valjoux Automatic. When Tony Kanaan wanted to create a watch that would be part of his ESSENTIAL GEAR for his active lifestyle, he turned to Luminox. In collaboration, they have produced three Limited Edition series which have all sold out! The fourth Tony Kanaan series was released in Fall 2012 and this is the first Limited Edition (311 pieces) with a Valjoux movement, a skeleton back and sapphire crystals on top and bottom.

All Tony Kanaan models feature his signature asymmetrical high polish black PVD-treated 316L stainless steel case with carbon fiber inlay on the sides. The Valjoux model has a classic upscale look with a black vertically textured acid-etched dial for textural contrast. Kanaan is currently driving Car #11 for KV Racing Technology and this model also features his logo, car number and green and yellow racing colors. Both second hands, standard and chronograph, are yellow and the other sub-dial hands are green. The thick black leather strap has contrast stitch in the same green and yellow.

The watch is water-resistant to 100 meters and features Luminox Light Technology, a proprietary system of self-powered micro gas tubes, mounted on the hands and markers of the watches, that glow continuously for up to 25 years, so that the dial can always be read, even in low light conditions. The Tony Kanaan Limited Edition, like all Luminox watches, is Swiss Made.

“Luminox keeps hitting the ball out of the park. The Valjoux is a testament of how you can perfect a design without changing its characteristics. This is a beautiful timepiece.” Kanaan comments.

Born in 1974, Tony Kanaan started racing go-karts in his native Brazil at the age of 8, later making his way to Europe and then to the US where he established his racing career. His impressive North American debut season included wins at Detroit and Laguna Seca, a second-place finish at the Indy Light Championship, and a Rookie of the Year Award. The next year Tony won the Indy-Lights Championship and moved up to the CART Series in 1998. In 2004 Kanaan claimed the IndyCar title, completing every single of the 3,305 laps of that season, making him the first IndyCar Series driver to achieve such feat. To date, he has claimed a total of 15 IndyCar race victories and 15 pole positions and holds the current of record of consecutive starts for an active IndyCar driver, at 190. Kanaan is the only driver to lead the Indianapolis 500 in each of his first seven starts. TK, as he is known around the paddock is also an avid amateur triathlete. In 2011 he competed for the first time in the Kona Ironman World Championship finishing the 2.4 miles swim, 112 miles bike and 26.2 miles run in just under 13 hours.