Those of you who thought the Parmigiani Bugatti Mythe was annoying to attempt to check the time on look away now. This is the MB&F HM5. And if I had to describe it in two words, they’d be: fantastically pointless. That’s what this is, it doesn’t need any of the complicated bits that it has but they’re there anyway. Before we begin it’s needless to say really that if you have a budget in mind to spend on your new watch this isn’t it. And then there’s the name. We’re guessing that it means carbon fibre or something similar. But really, if the name of your product makes no sense in any language then you really should re-think your strategy. 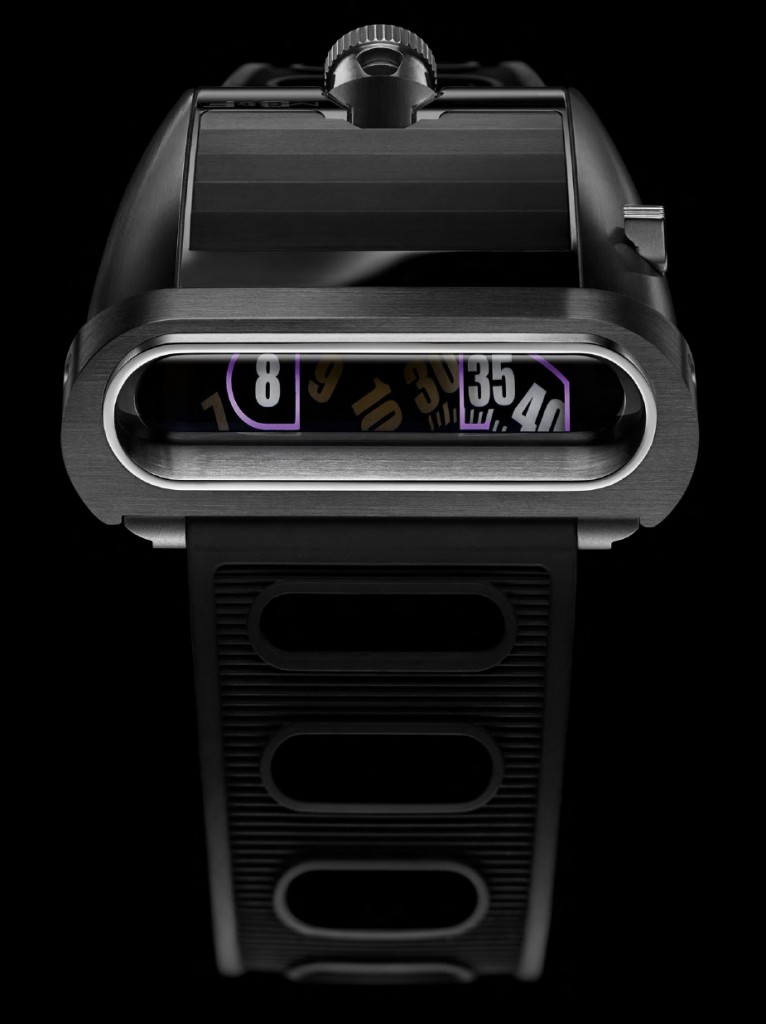 Please bear in mind that this is not a new watch line. The Carbonmacrolon is however a new addition.

To tell the time on this you need to look at one end, it’s very low so you could miss it. However, the numbers in there do represent the time, in much the same way as the Lange Zeitwerk does. To save space MB&F came up with a weird system that moves each number around 90 degrees when the time (ha, terrible pun there) comes that they are needed. Honestly I have absolutely no idea how the system works and MB&F isn’t inclined to explain. Either way it’s probably more likely that there’s some Hobbits in there holding up the numbers in front of the magnifier.

Just like the Parmigiani, the MB&F HM5 is inspired by the motoring industry. However, unlike the Parmigiani, which took design elements from the French motoring legend Bugatti, the HM5 seems to take more inspiration from the DeLorean DMC-12, for good or bad is up to you. No, unfortunately there aren’t any gull wing doors. There are, however, some flaps on the back (those black ones) that can lift up a little via a separate crown so you can see the inner workings of the HM5, this also allows light in to charge the numbers which are coated with Super LumiNova. 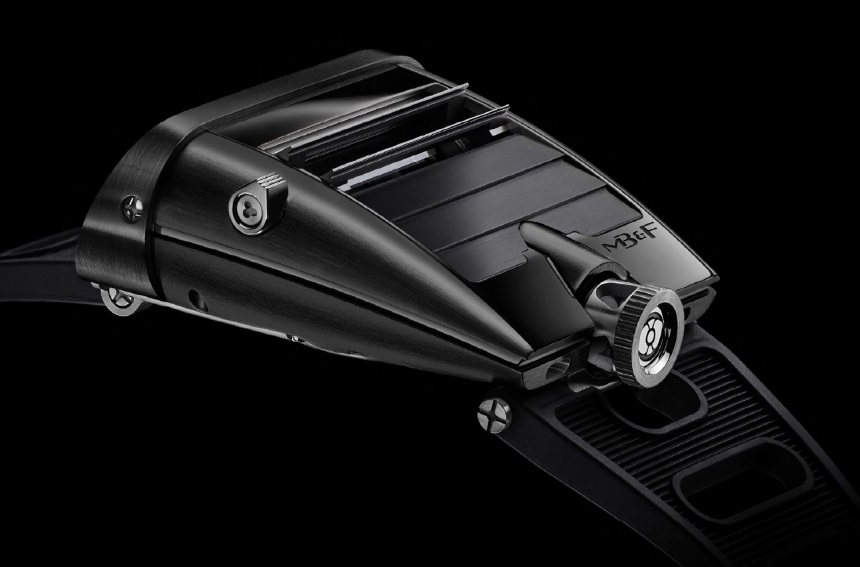 Taking the car theme even further, this watch actually has exhaust pipes. Yes, exhaust pipes, or tail pipes as the Yanks call them. Like the Breguet LaMusicale, this watch allows water inside the outer case, with the movement being suspended inside an inner case. This means that when the watch is pulled out of water we get to see a trickle coming out of the pipes which is a nice little detail. 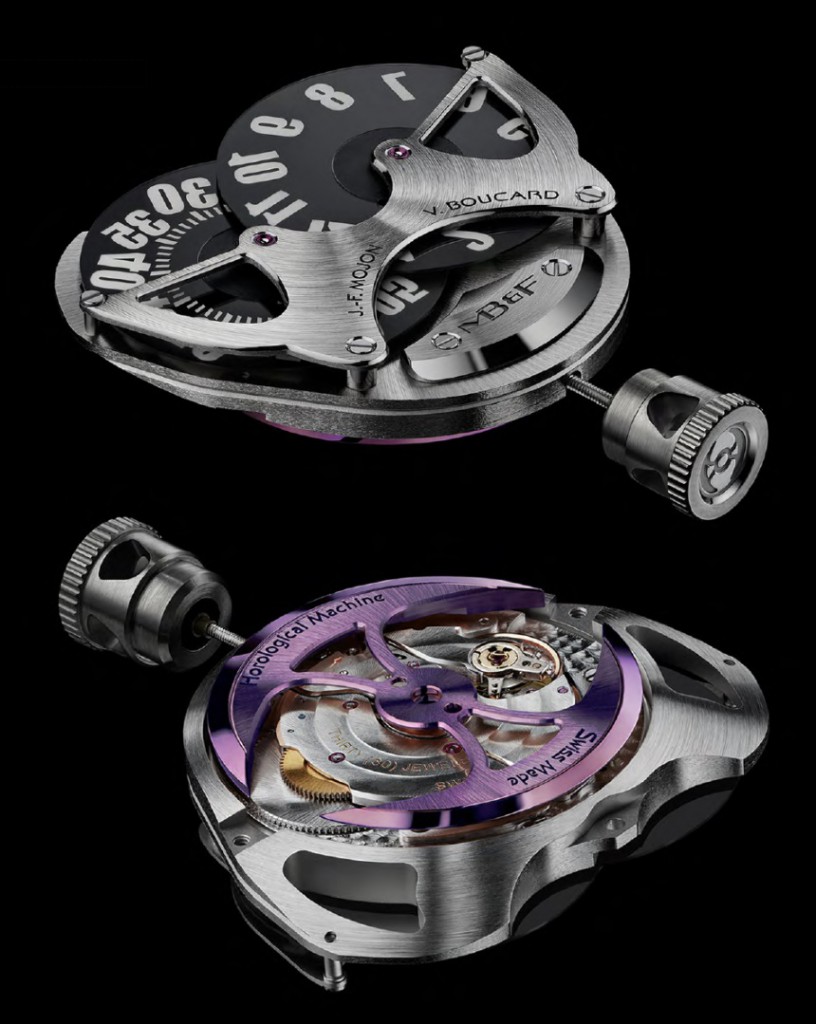 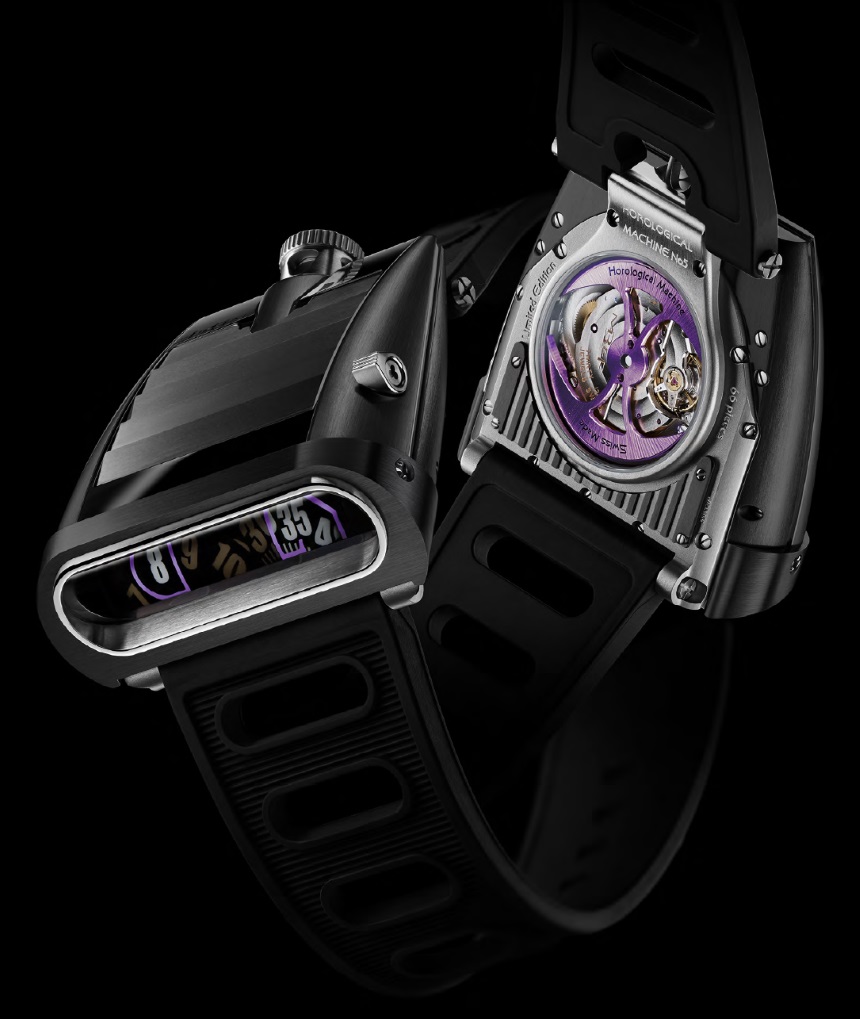 If you turn the watch over you can see the rotor of the HM5’s movement. It’s a unique design in that it has a counterweight to it, which is something you don’t usually see in a watch. This is because the imbalance in the rotor system allows the rotor to move around more. Being balanced, movement won’t affect it so much, so be careful when it’s on a winder.

This watch is offered in two other variants apart from the focus of this article. First, there’s a zirconium case with a steel inner case or as MB&F calls it, an “Engine Container”. There’s also an 18K red gold option that has a titanium inner case.

The HM5 comes on a rubber strap with similarly shaped cut outs as the crystal on the watch itself. It also comes in a very 70s sci fi-box, which is shaped to look like some sort of space base on a planet somewhere in the galaxy. Honestly, I wouldn’t be surprised if there was a Facehugger from the Alien series lurking in there too.

So although the HM5 is completely pointless and the Carbonmacrolon is nothing new, it’s very good at it. Prices upon request to MB&F and you better get to a boutique quickly as they’re limited to 66 pieces per material. It’s a solid but bonkers watch, but it’s an MB&F. And that’s what they do best. For more info, please visit mbandf.com