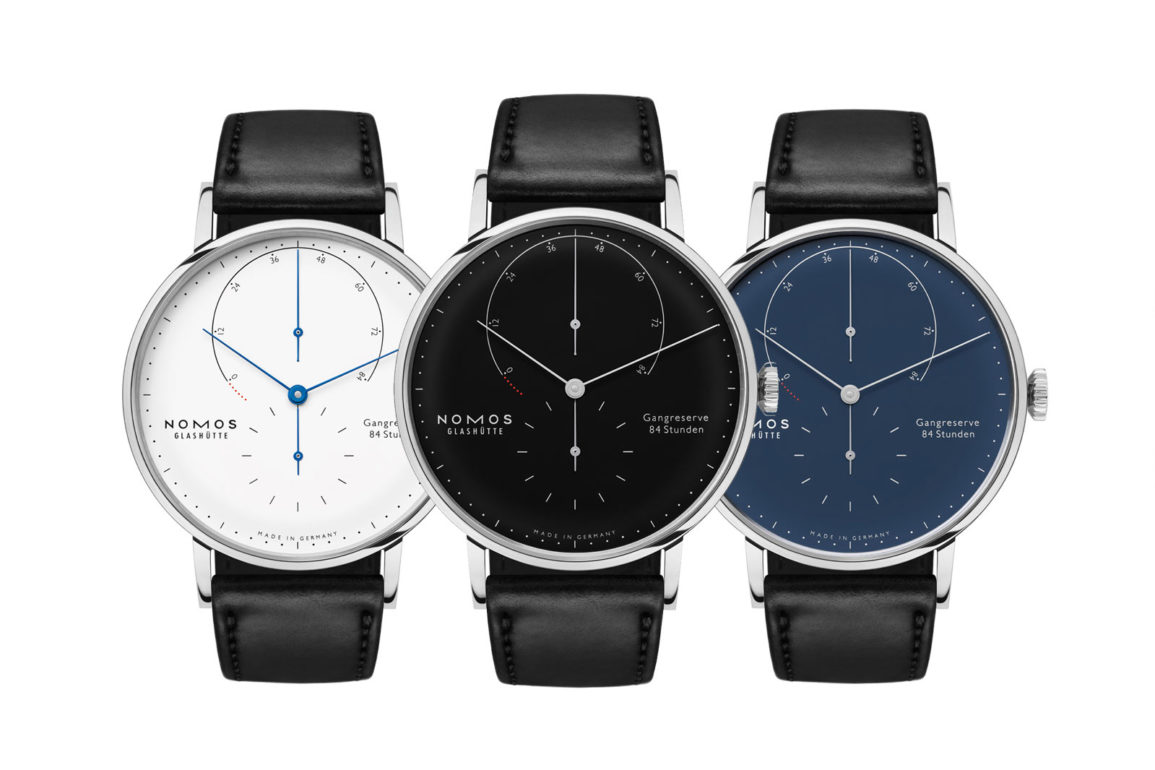 This is NOMOS' way of celebrating 175 years of precision watchmaking in Saxony.

Did you know that Glashütte has eleven watchmaking companies in its 37 square mile area? It was all kicked off by Ferdinand Adolf Lange 175 years ago in December of the year 1845 when he founded A. Lange & Cie. Watchmaking in Glashütte would, over the years, boom and create a healthy economy for the area. Although the names have changed and Glashütte looks very different today, it’s still the home of German high-end watchmaking and is celebrating it. In September we showed you the new watches from A. Lange & Söhne celebrating 175 years of precision watchmaking in Glashütte, now we’re going to show you Nomos’ watches celebrating this birthday.

Nomos has come a long way since its founding in the 90s, and it’s been best known for making watches that are extremely good value for money. You can buy a Nomos that has an in-house movement with in-house made case and an original design for a relatively low amount of cash, we’re talking less than $3000 low. That amount of money would normally get you a watch with a bought in movement and probably a made up pedigree too, but not with Nomos. 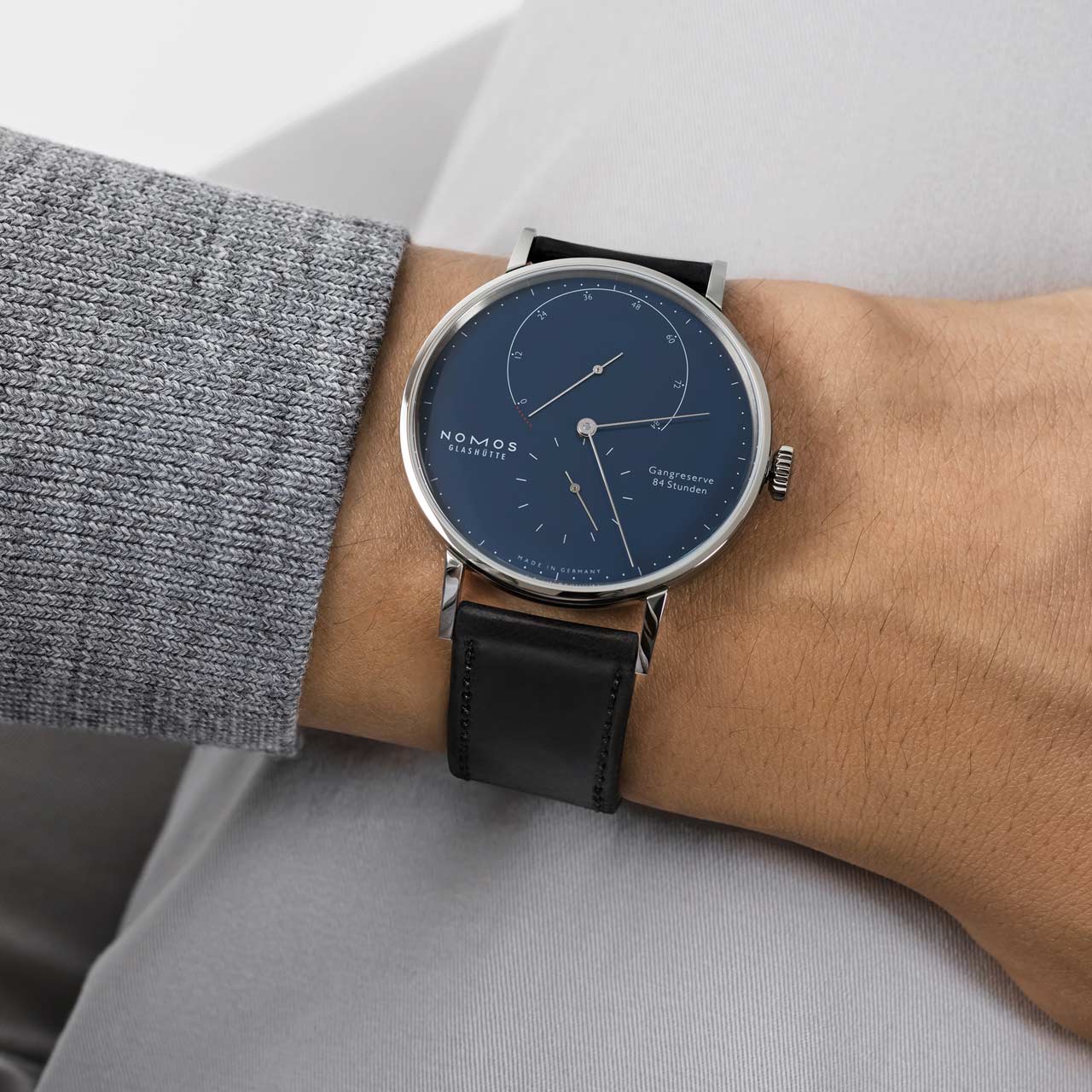 Making affordable watches may be Nomos’ M.O, but it’s not the only thing they do. If you have the cash, they have the Lambda, a watch that up until now was made only from precious metals featuring hand decorated movements. The Lambda features a dial that can only be described as Bauhaus to the max (yes I know it’s an oxymoron), it features a sparse dial with extremely thin hands and microscopic markers. It has a power reserve, a running seconds and that’s it, no date windows or any other complications. It doesn’t really need them, either. 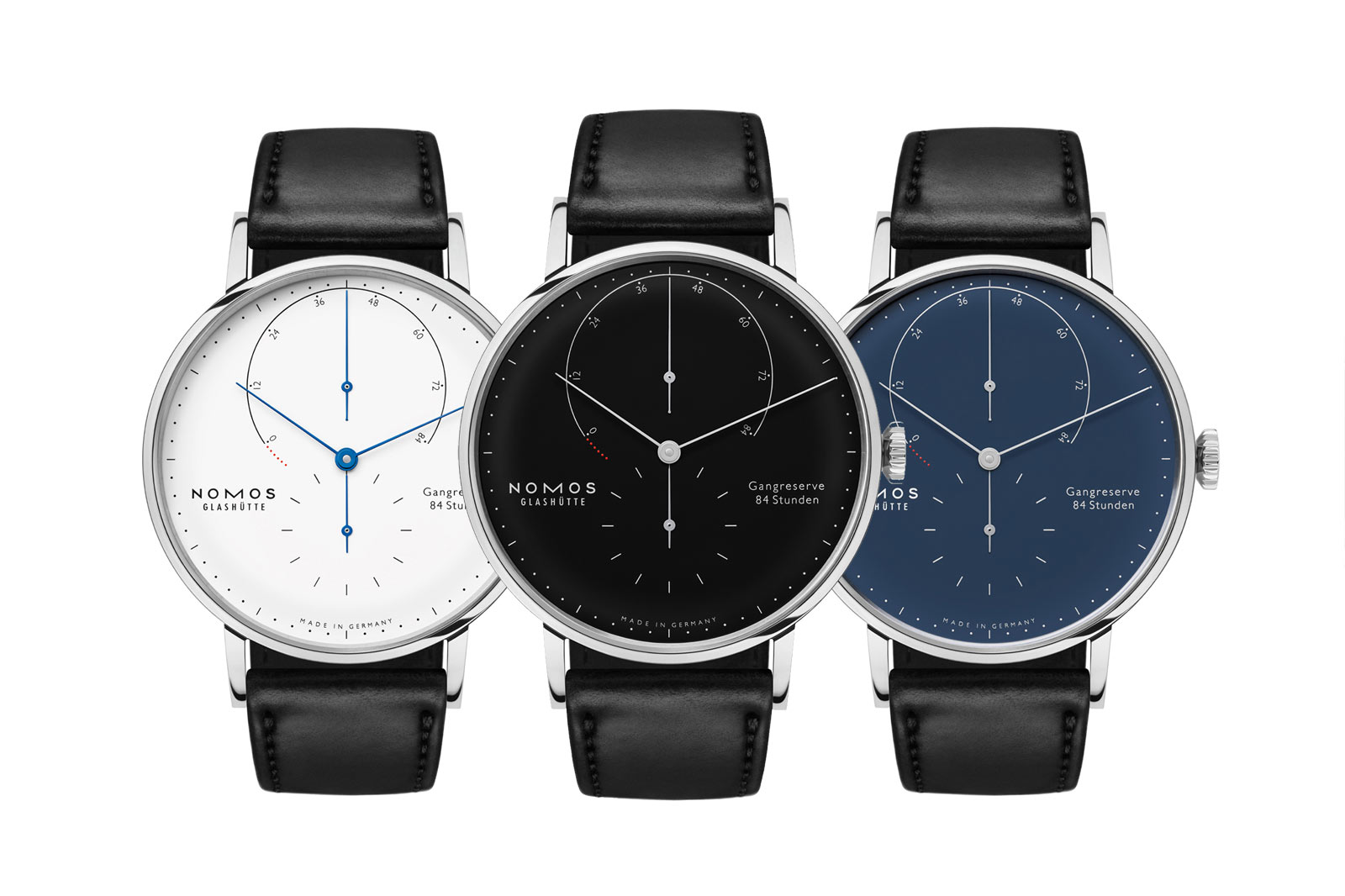 If you wanted a Lambda you’d need to fork out five figures, and that’s a lot considering their competition. For the 175th anniversary of precision Saxon watchmaking, they’ve ditched the gold alloys and gone with stainless steel. 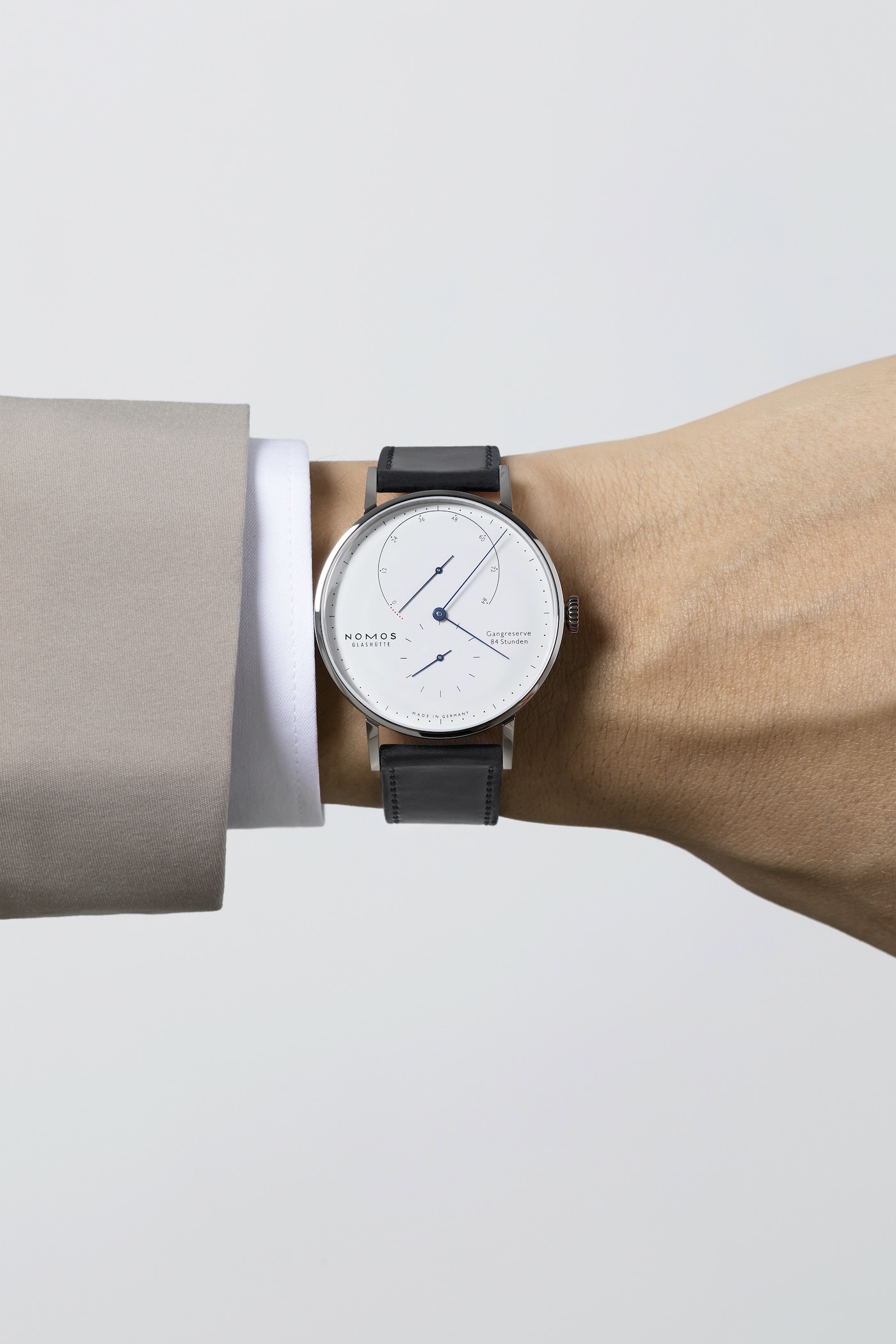 The three limited edition models come in the same 40.5mm diameter, and with their case thickness at a sleek 8.9mm they will undoubtedly sit well on the wrist. As for dial colours you have a choice of three, a crisp white with blue hands, a deep black with silver hands or a muted blue which also has silver hands. All three dials are made of ceramic for the steel Lambda models, and they’re all limited to 175 examples. 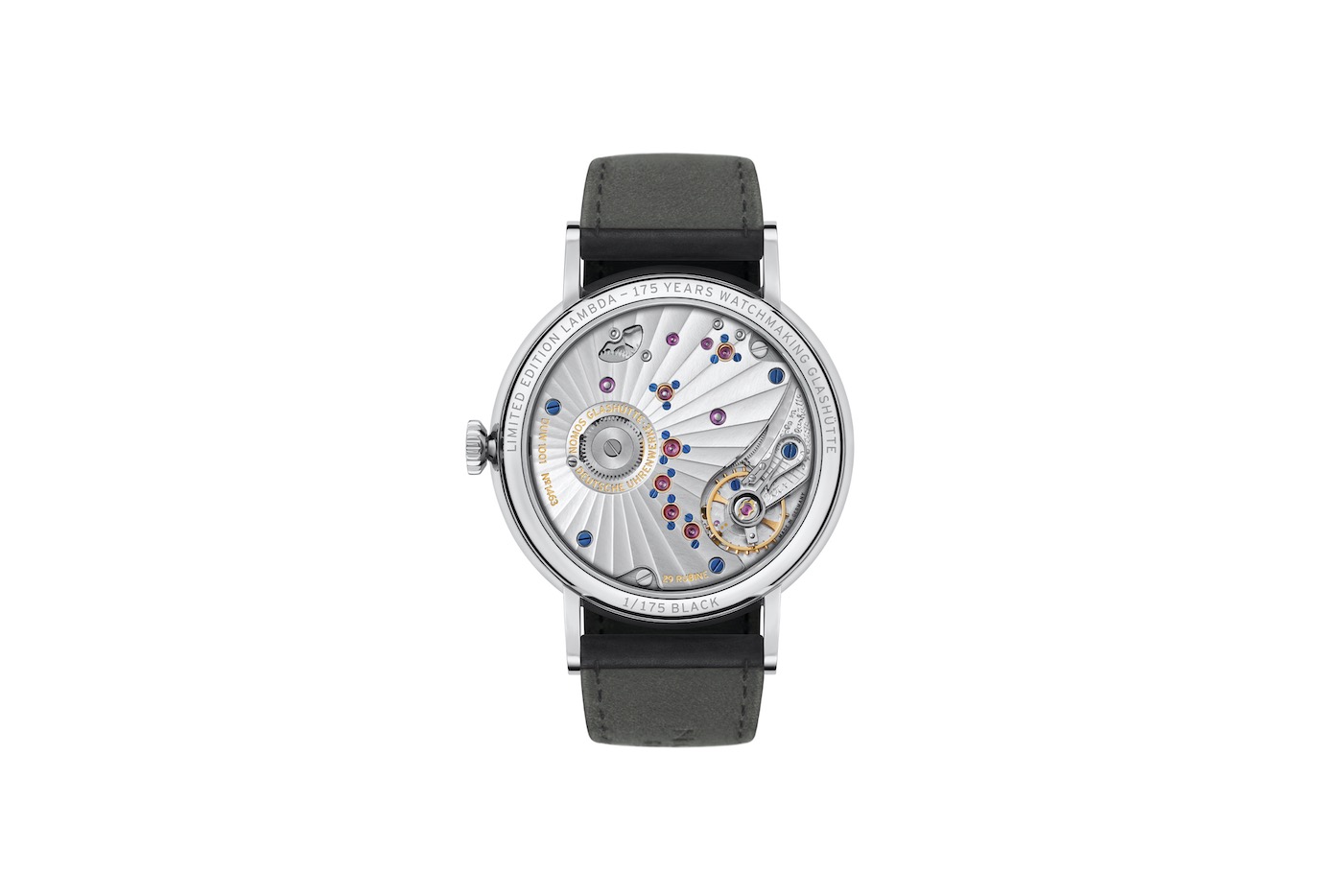 Inside the watches is the calibre DUW 1001 which is Nomos’ idea of a traditional Glashütte movement. It features a three-quarter plate with Glashütte ribbing extending out from a cutout in the middle of the plate, it also has a swan’s neck regulator as you see on other Saxon watches. Hand finishing is also present here, the edges have been filed and polished by hand and the balance cock has been engraved by an artisan too, along with the ribbing. It has a double mainspring barrel providing 84 hours or power reserve, as mentioned on the dial (the text “Gangreserve 84 Stunden”). It also has 29 jewels and a frequency of 3Hz. 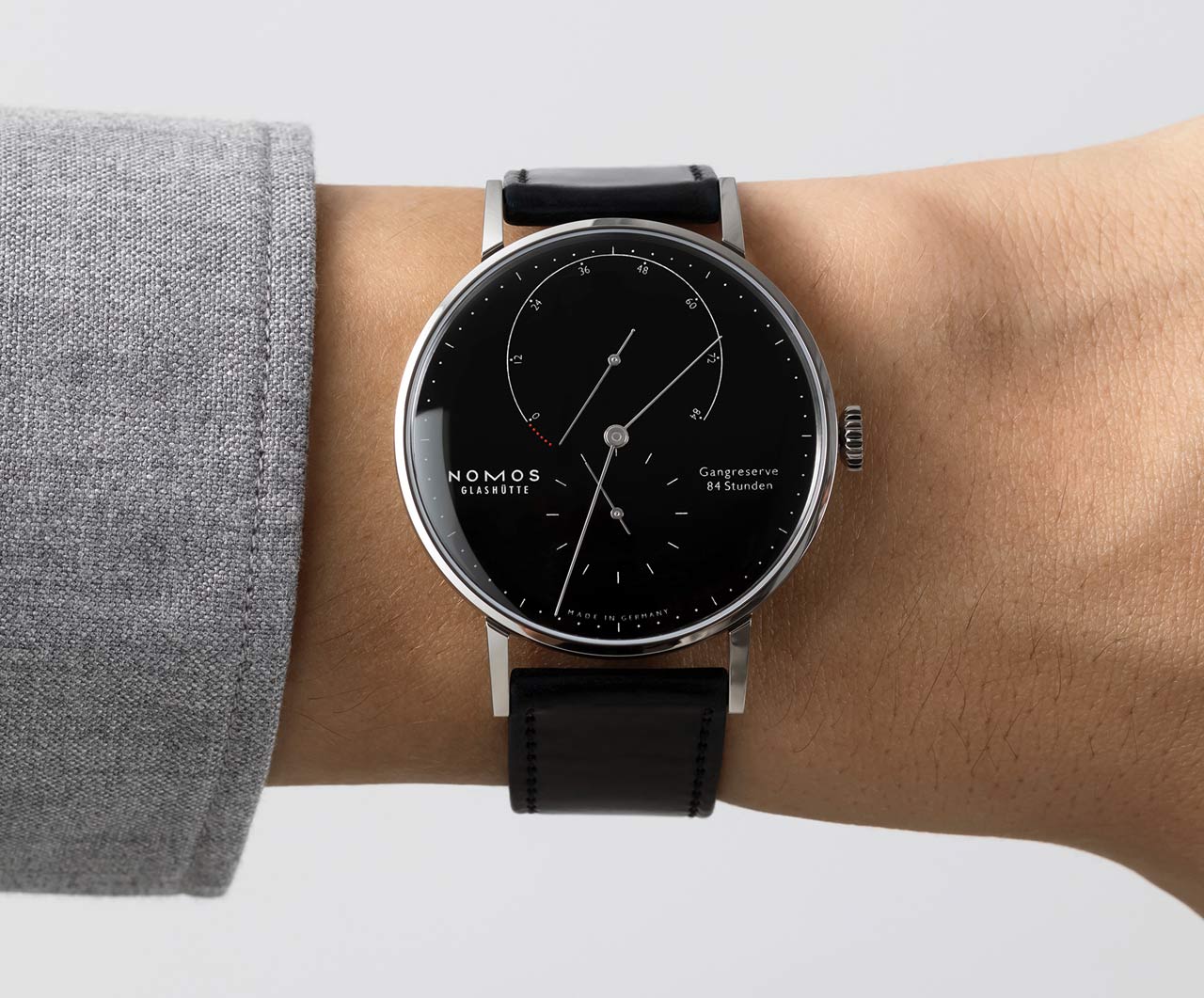 As I mentioned, the watch is made of stainless steel which has dramatically decreased the retail price. One of these will set you back €5800 or $7500. I like that on the caseback it tells you the colour of the dial on the watch as if you’d forget when you turned it over. Quirks like that and the German engraved on the balance wheel that says ‘Lovingly produced in Glashütte’ (I can’t make it out in the pictures either) make this a fun watch.