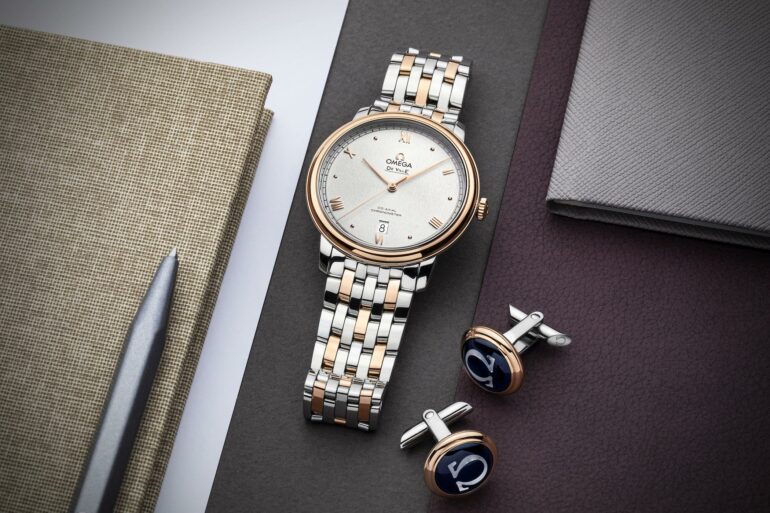 When you think of Omega, you probably think of the Seamaster, the Speedmaster and the endless amount of limited edition watches celebrating things that don’t seem particularly noteworthy. Your mind may then wander to the Constellation or Omega’s range of Omega branded accessories. At the very end of the queue of thoughts about Omega is probably the De Ville collection. 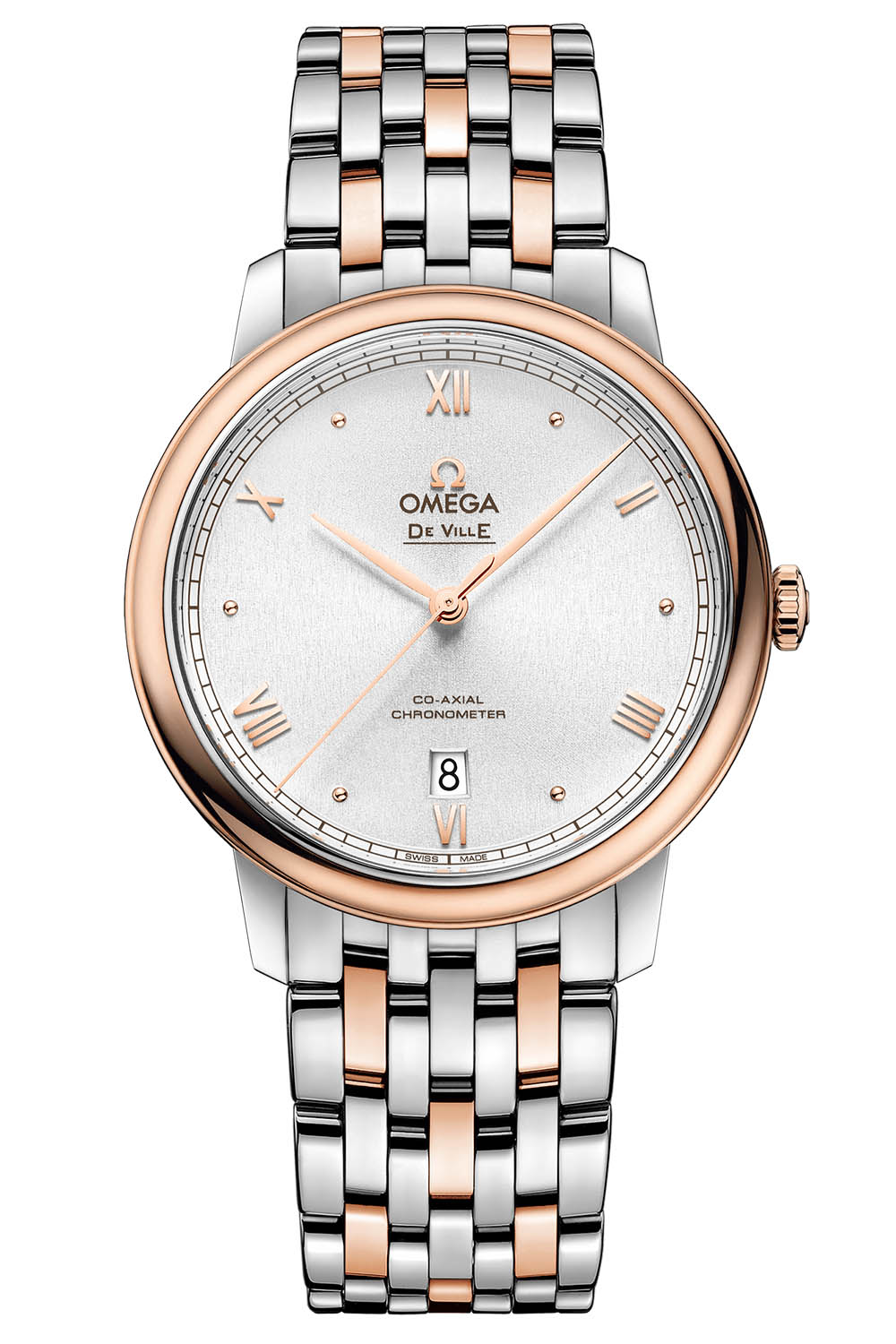 The De Ville is Omega’s dressy watch collection, not to be confused with Omega’s dressy/sporty watch the Seamaster Aqua Terra or their smart/casual watch the Constellation. You get where I’m going with all this? It feels to me like the poor De Ville is so overlooked that it’s almost not worth keeping any more, but evidently, Omega sells enough of them to pay for some new dials which are what we are seeing here today. 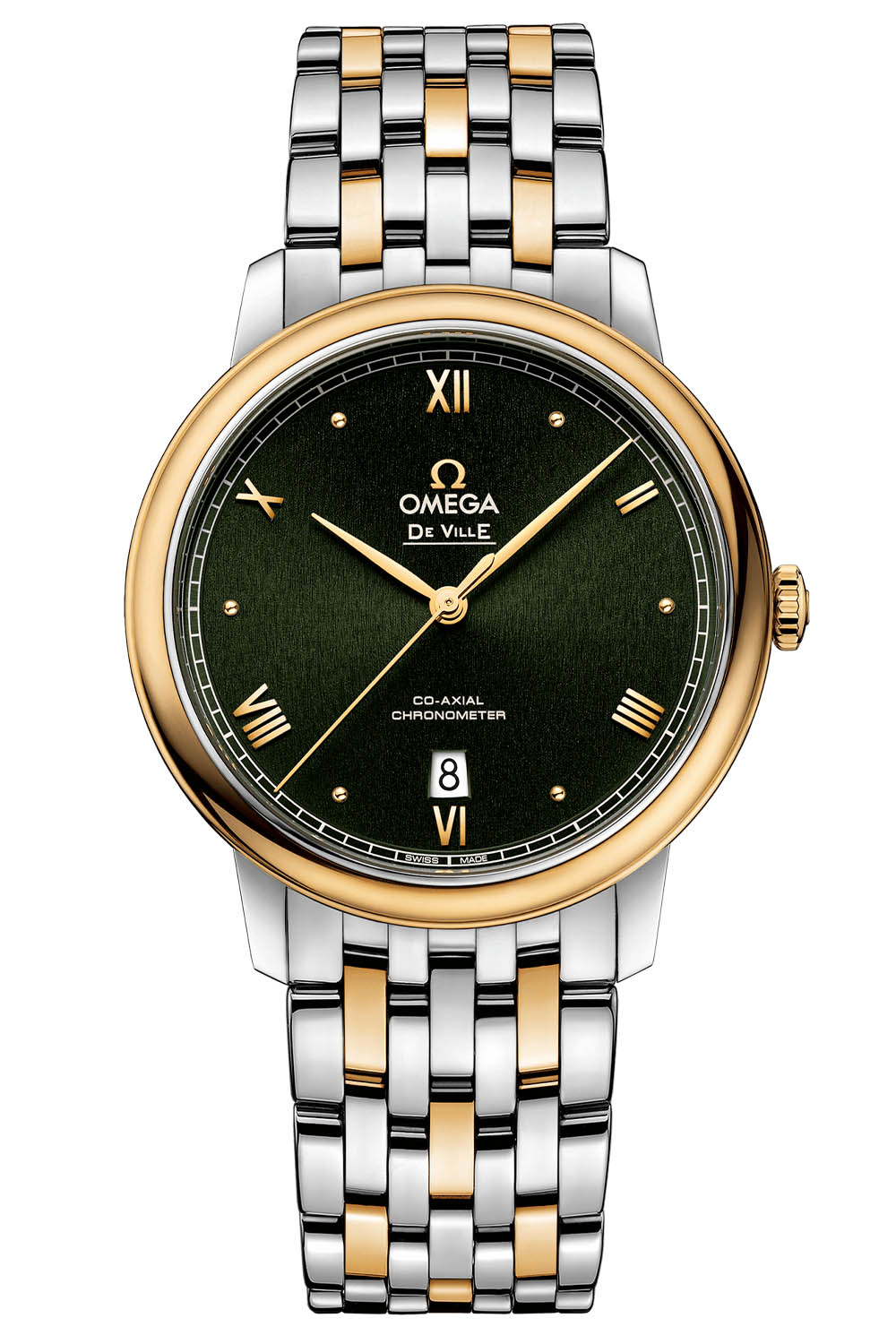 All of the models being shown today feature a case that measures 39.5mm in diameter with a 30m water resistance rating and polishing all around. Omega has stuck with the 1960s formal watch theme that the De Ville has had for a while now. That means we get a domed crystal connected to a thin stepped bezel with narrow lugs and a relatively flat crown. 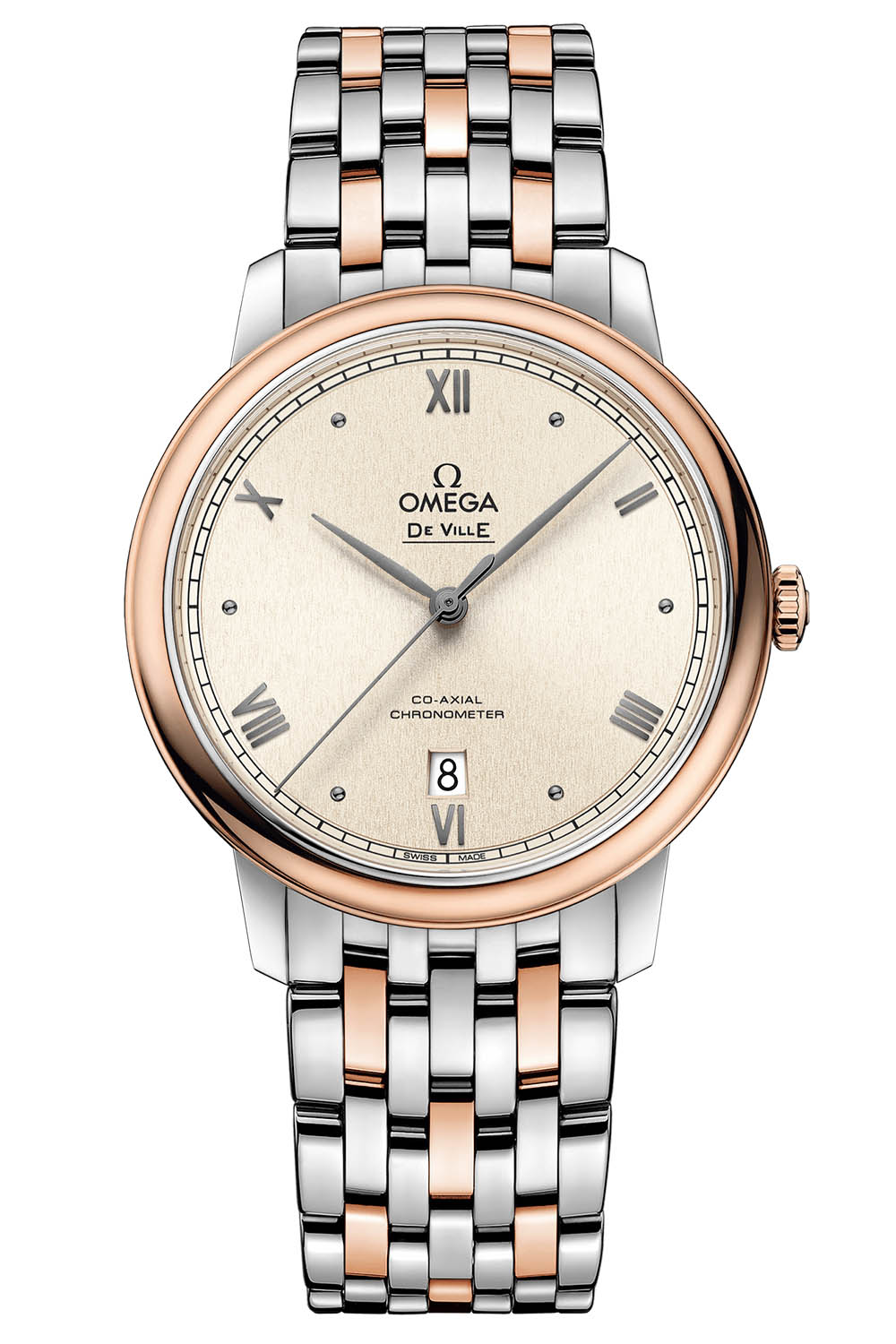 Out of the five watches on display here, four of them are time-and-date only watches. These four also come in two-tone only, two of which marry steel with 18k yellow gold while the other two mix stainless steel with 18k red gold. If you’re after the pop of yellow gold, then you can choose between a deep green dial (ref. 424.20.40.20.10.00)or a gold-coloured diamond dial (ref. 424.23.40.20.58.002) which has arguably the most vintage aesthetic of the lot. 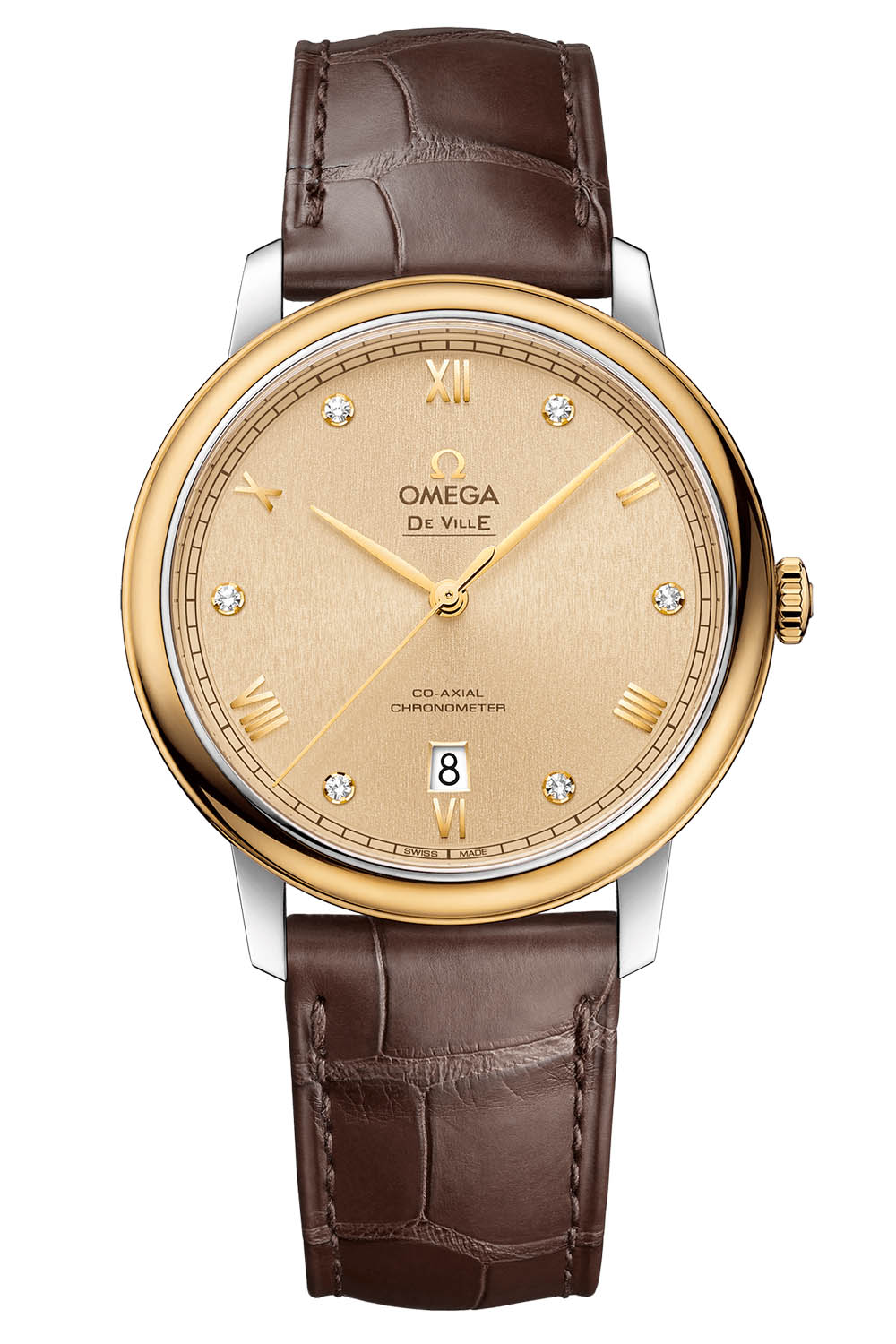 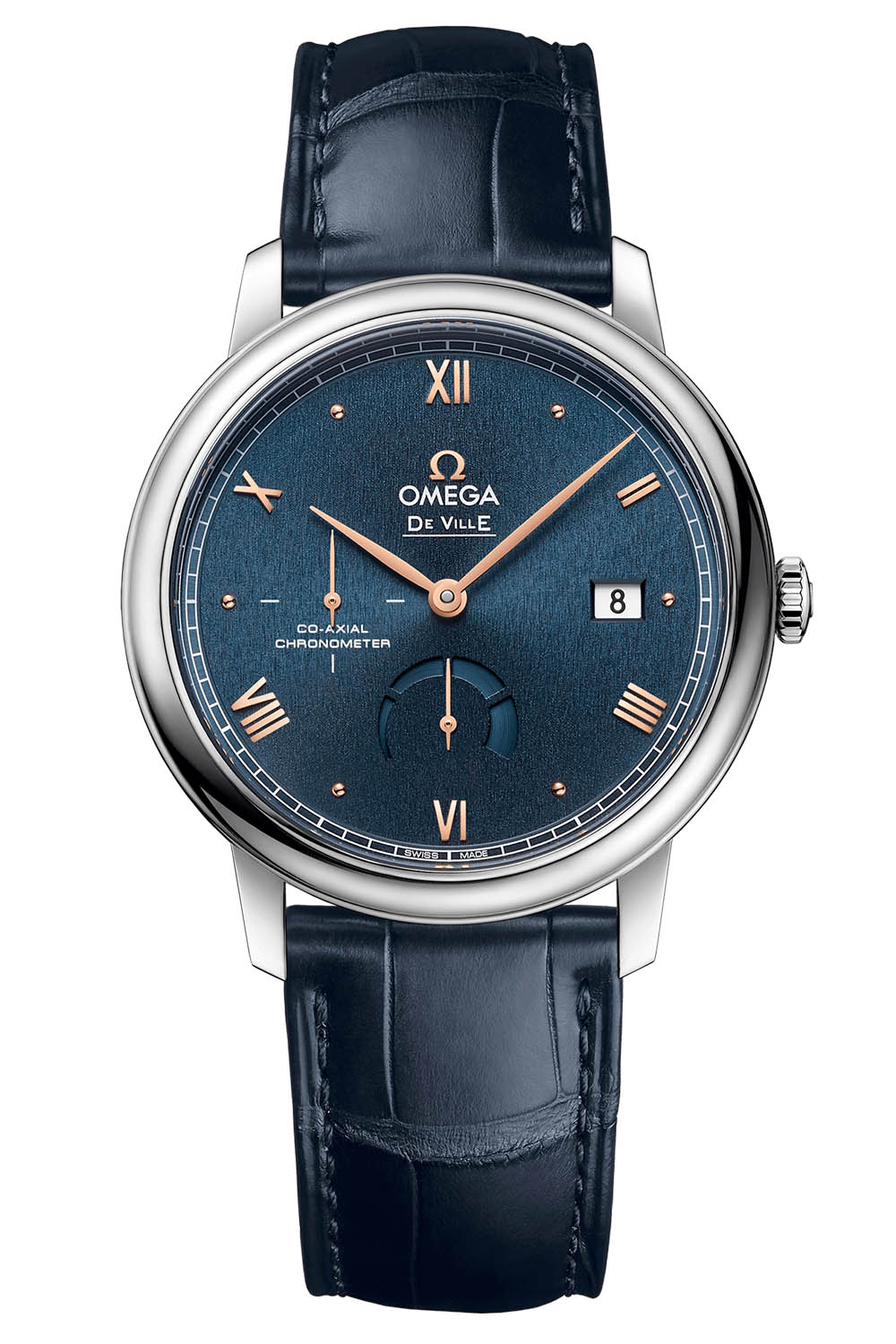 The last model (ref. 424.13.40.21.03.003) is slightly different. While it keeps the same basic design of the others, it loses the gold in favour of a sleeker all-steel approach with a blue leather strap to match the dial. This one features a date window at 3 o’clock as opposed to 6 where a power reserve is instead. This one also has a small seconds display.

While Omega has gone to the trouble of updating the dials, it hasn’t decided to colour the date windows as it should have done, which makes them stand out. It also hasn’t updated the movements, either. While the Constellation (eventually) received the Master Chronometer upgrade, the De Ville collection still has to make do with the old ETA-powered movements. In the four two-tone models that movement is an ETA 2892 which Omega calls the calibre 2500. It has a 48-hour power reserve and a 3.5Hz beat rate. In the blue model you get a modified 2892 with power reserve and small seconds, it has the same specs as before, but Omega calls it the calibre 2627.

I was hoping that Omega would finally have ditched the old ETA-based movements in favour of its new in-house ones. Sadly, it seems the De Ville is not quite there yet. I like it, but I prefer the Constellation.