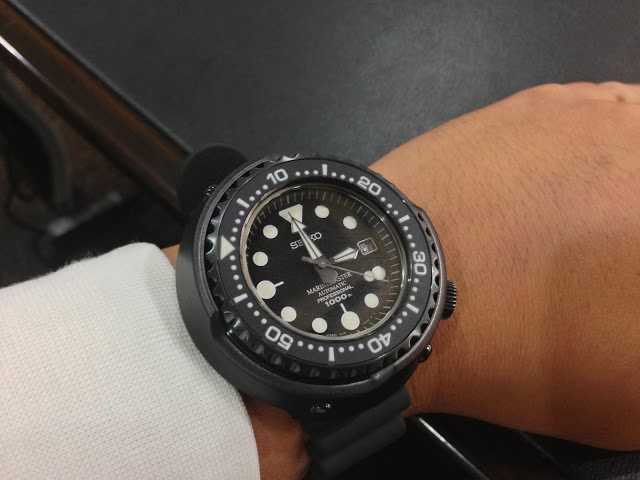 Seiko has a number of notable offerings, Their professional watch series is one of the, if not the best, in the world. Under the Prospex sub-brand, these are purpose built tool watches.

In the last few days of 2013, I finally achieved one of my grails, the Seiko Marine Master Professional 1000m Automatic Diver SBDX011. Commonly known as the Tuna or Emperor Tuna or Darth Tuna or Hockey Puck, this is the flagship of the entire Seiko automatic divers’ line.

Unfortunately, this watch is only available in Japan. But not to worry, my good supplier, Mr Katsu-san of www.higuchi-inc.com is ever ready to deliver. After just a few days, the familiar looking EMS box from Japan Post was on my desk. 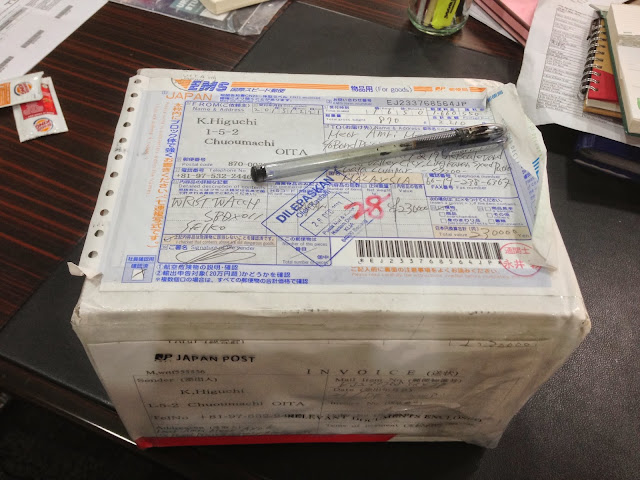 Not a lot has been written about the SBDX011 even though it was released way back in April 2009. The reason is that it was destined only for the Japanese domestic market. Although Japanese horologists would provide the necessary write-up on this model, language barrier as well as the unavailability of the watch to be reviewed in depth outside Japan exacerbates the poor coverage on this model.

Therefore, I am taking this opportunity to contribute towards the existing pool of information about this watch.

When I opened the package, I was greeted by a set of origami made the staff of www.higuchi-inc.com. I was touched by the gesture. 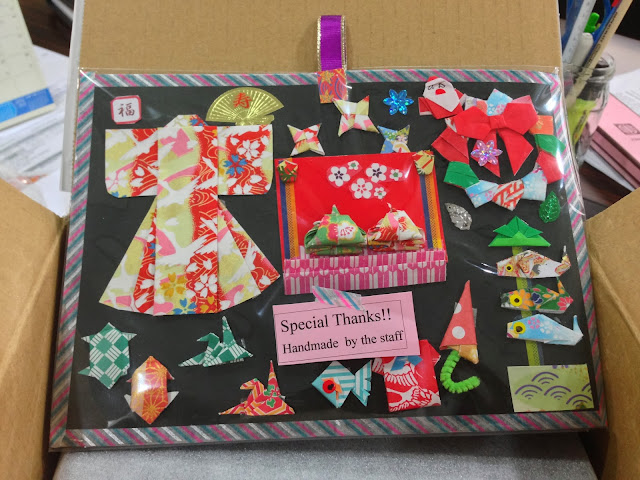 The package was well insulated. Not that it matters anyway since the watch has a built tough reputation.

The main watch case in rectangular and in black. A cardboard sleeve protects it. 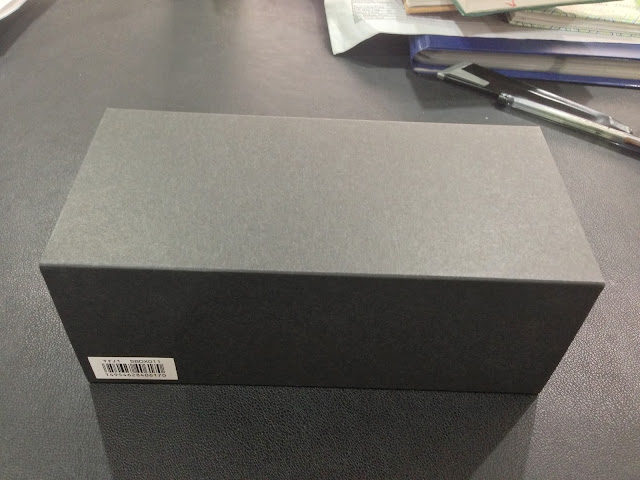 After taking off the sleeve, you will find the familiar box with the Seiko brand printed on top in white. 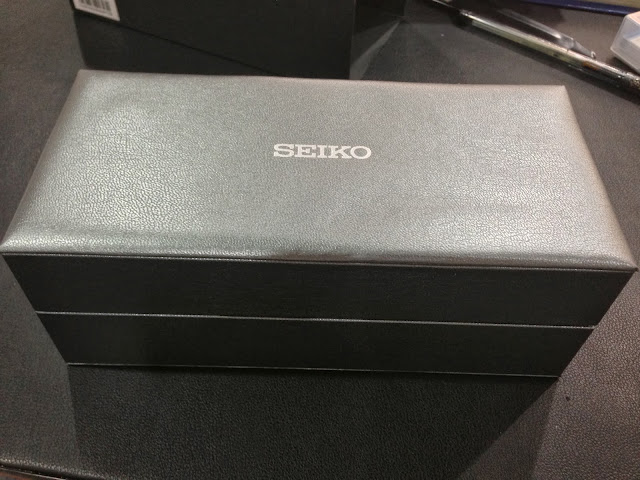 Opening it reveals the watch. What a stunner. The size of the beast is breathtaking. Even though still wrapped in plastic, you can clearly see the immense bulk of the watch.  It truly deserves the various nicknames given to it. 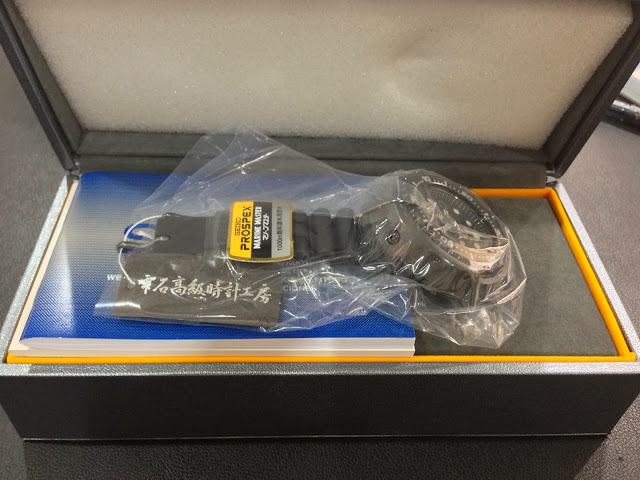 One of the documents that came with this watch highlighted the caliber of the movement used in this model. The 8L35 in an automatic, windable and hackable in-house movement by Seiko. Using 26 jewels, operating at 28,800 bph and a power reserve of 50 hours, this movement is one of the top line movements that Seiko reserve for only its best models, namely the Grand Seikos. In this particular case, the SBDX011 is deemed to be Seiko’s best-in-class, hence it’s right to use the 8L35. In fact, the 8L35 is an undecorated variant movement similar to that of the 9S55 Caliber.

Seiko claims the watch is +/- 10 to 15 seconds a day but as in most cases, Seiko’s actual accuracy is better. In a number of reviews made about this watch, the accuracy of +/- in seconds should be measured in months instead of days. For example in an August 2008 article by Ariel Adams, he said the 8L35 has been better than even chronometer ratings with accuracy clocking in at +/- 10 to 15 seconds a month. In another article written in February 2010 by @bigrustypig, he mentioned accuracy of +12 seconds per month. 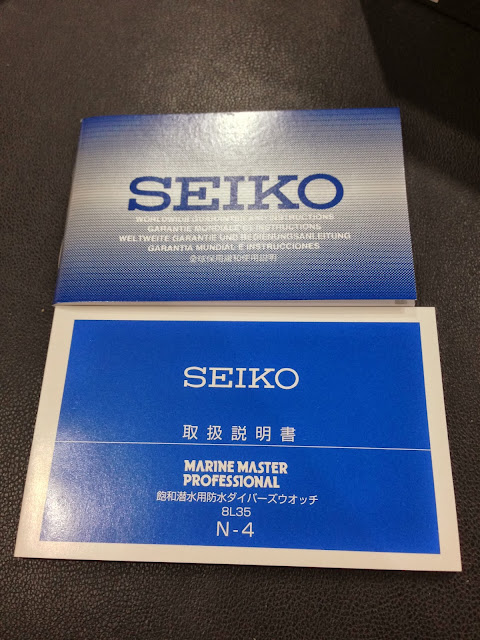 The Marine Master has a 52 mm diameter single block titanium case with special coating and a height of 17.4 mm. The dial is covered by a thick internal anti-reflective coated sapphire crystal. With the standard rubber strap provided, total weight of the package stood at 140 gm.

The care for details is excellent. The workmanship on the titanium case with its DLC-like treatment is so smooth like liquid metal. The case protection in the form of the shroud is made of some kind of matte ceramic, fixed by four hex screws, also DLC-like. 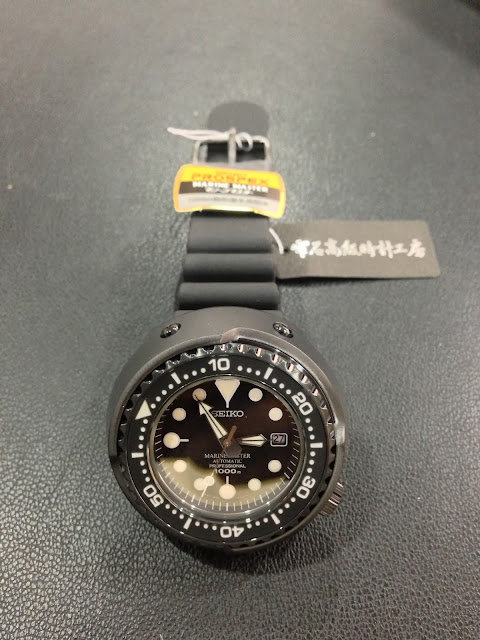 Looking at the dial, it is very legible and perfectly finished for professional use. Big luminous hour markers using Seiko’s proprietary Lumi Brite paint generates maximum brightness for referencing under almost all circumstances.

There is a lot of writing on the dial. It tells us the model name, water resistance level (1000 meters) and the fact that it has an automatic movement. It also tells us proudly that it has been made in Japan. The concept of writing a lot on the dial is similar to that found on the Rolex Deepsea Sea Dweller. 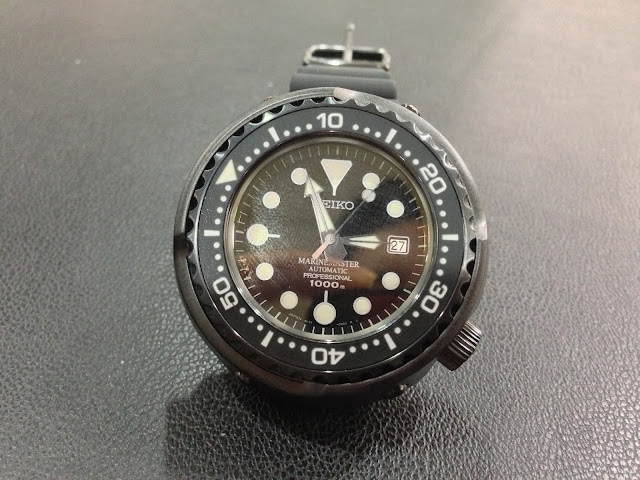 Operationally, the bezel action is finer than the Seiko SBDX001 (or 300MM). It’s very exact and there’s no looseness. The bezel pip falls on each division perfectly. Bezel grip is good, wet or dry. It takes 120-clicks for a full rotation.

The flat sapphire crystal is well recessed under the matt bezel and the bezel insert itself is recessed ever so slightly into the bezel face. 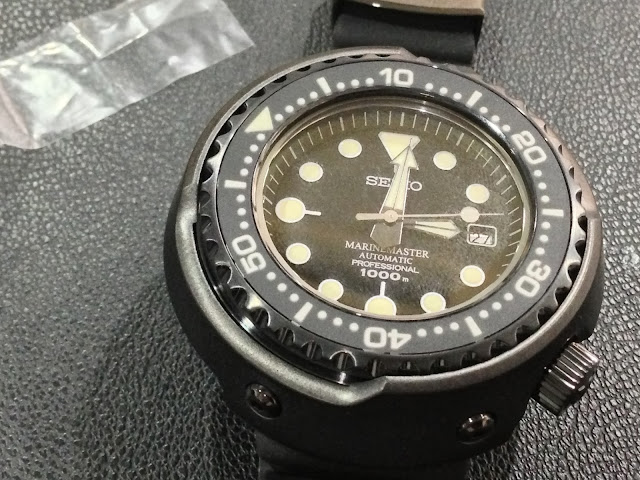 Below is a photo I took which shows the lume. Note the dark area where the 3 o’clock marker should have been? I hope Seiko would look into this when they design their next diver. 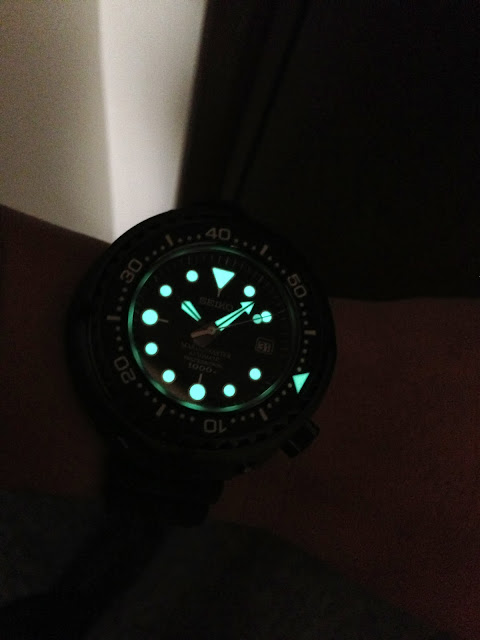 The angle shot below shows the quality of the anti-reflective treatment used. 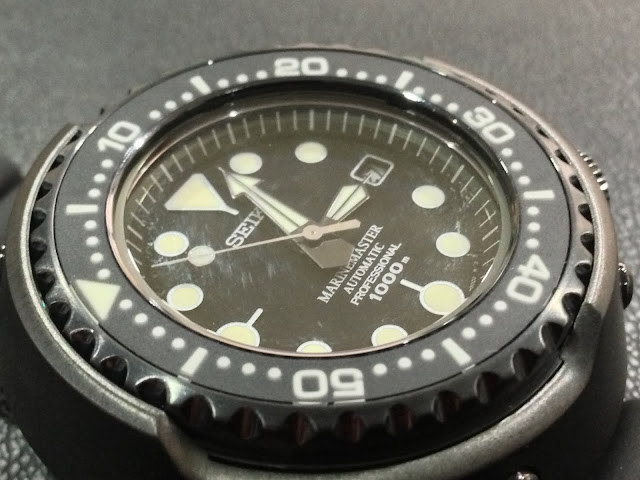 When looking at the watch from the side; the size, the height and the concentration of weight implies a very uncomfortable wearing experience. However, in reality, it is not so. In fact, wearing it is comfortable. The placement of the lugs instead of at corner of the watch casing to below it helps reduce the overall gap to below 50 mm i.e. smaller than the diameter of the watch. The only sacrifice with this design is that the watch rides high on the wrist. Definitely not for formal wear.

The drilled lugs makes it easier when removing a strap. The signed crown, the hex screws, the rear case design and the encompassing shroud are all built to very high tolerances.

The curved underbody and the watch’s high ride make crown accessibility excellent, even with the SBDX011 on the wrist. You can easily manipulate the big crown when wearing the SBDX011.

The crown wind is smooth and easily connects to its thread when screwing it down. 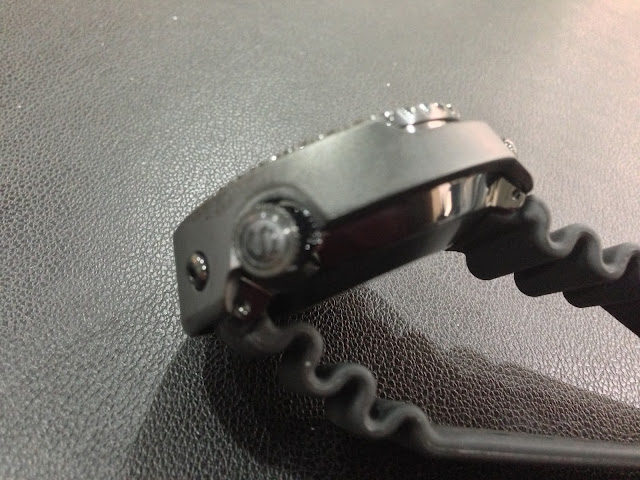 The standard rubber strap provided looks similar to straps provided to other Seiko divers but has been given a bit of finesse to put it apart from the rest. The buckle and keeper are titanium and has the same DLC-like treatment similar to the casing. 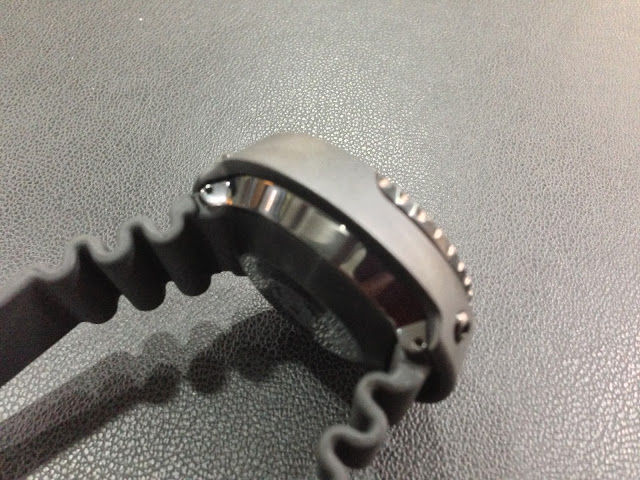 The famous tsunami logo is etched on the middle of the case back. To access the movement, the watch can only be open from the front as the whole watch is made out of one solid piece of titanium with a single access.

Between the movement’s top plate and the “floor” of the watch case is a thin sheet of lead for anti-magnetic properties. Size of each of the 4 hexscrew heads is 5 mm. The screws are blackened with a DLC-like coating.

The watch is capable of diving right down to 1000 m. Nevertheless, there is no helium escape valve (HEV) mechanism needed because the watch simply doesn’t need one. With the use of a proprietary L-shaped gasket, Seiko has totally eradicated the need for the HEV. 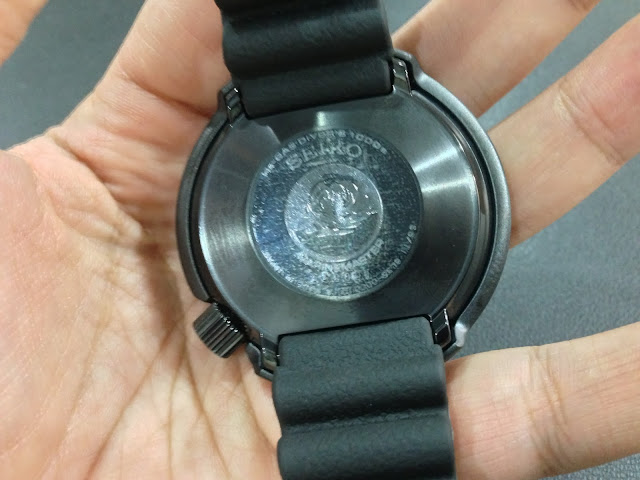 Here are a few wrist shots. Despite the casing overwhelming my 7.5 inches circumference wrist, it wears well and comfortable too. More importantly, the watch does not flop around. I’ve read from other reviewers that they face this problem but I then realized their wrist size is sub-7 inches in circumference. It does appear that this watch can only be worn comfortable by persons of certain built. 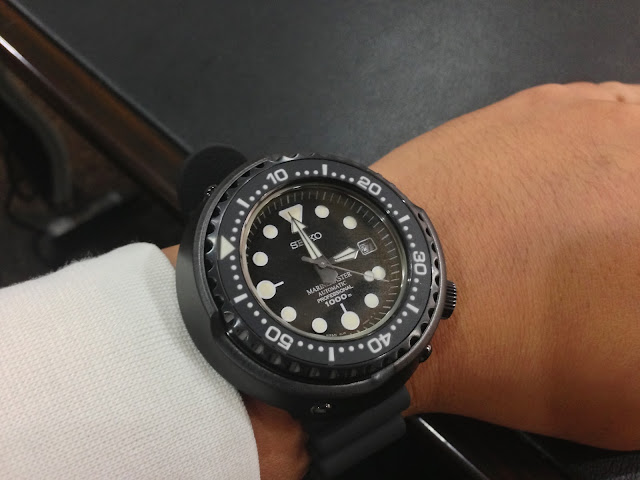 There is no way this watch will every slip under the cuff of a shirt. Anyone thinking it can be used with formal attire is sadly mistaken. 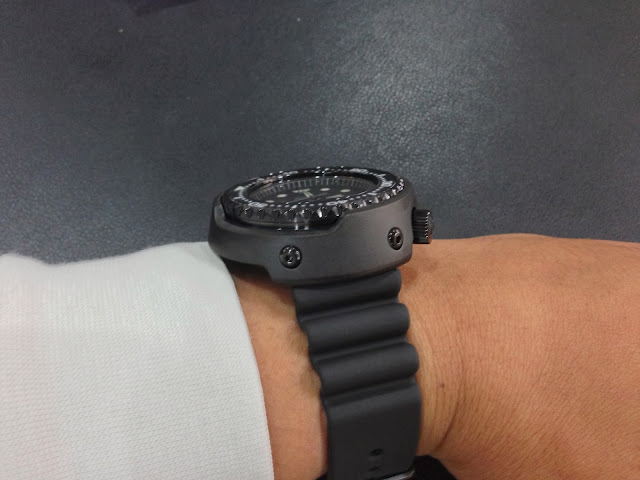 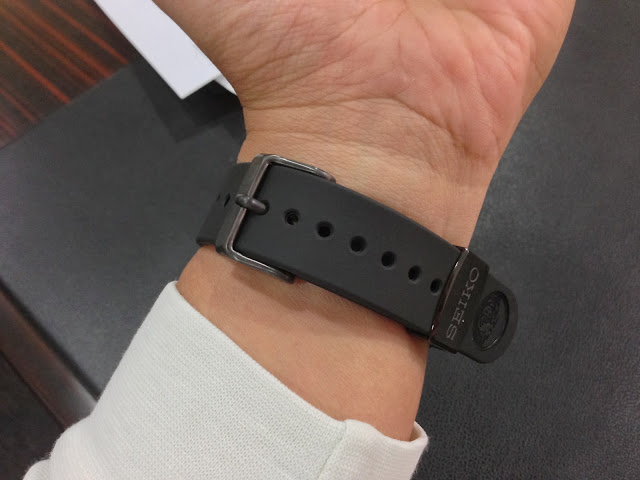 All in all, the SBDX011 is the best that Seiko has to offer. Everything from build quality, to the movement, to the history is nothing short of true professional diving watch.