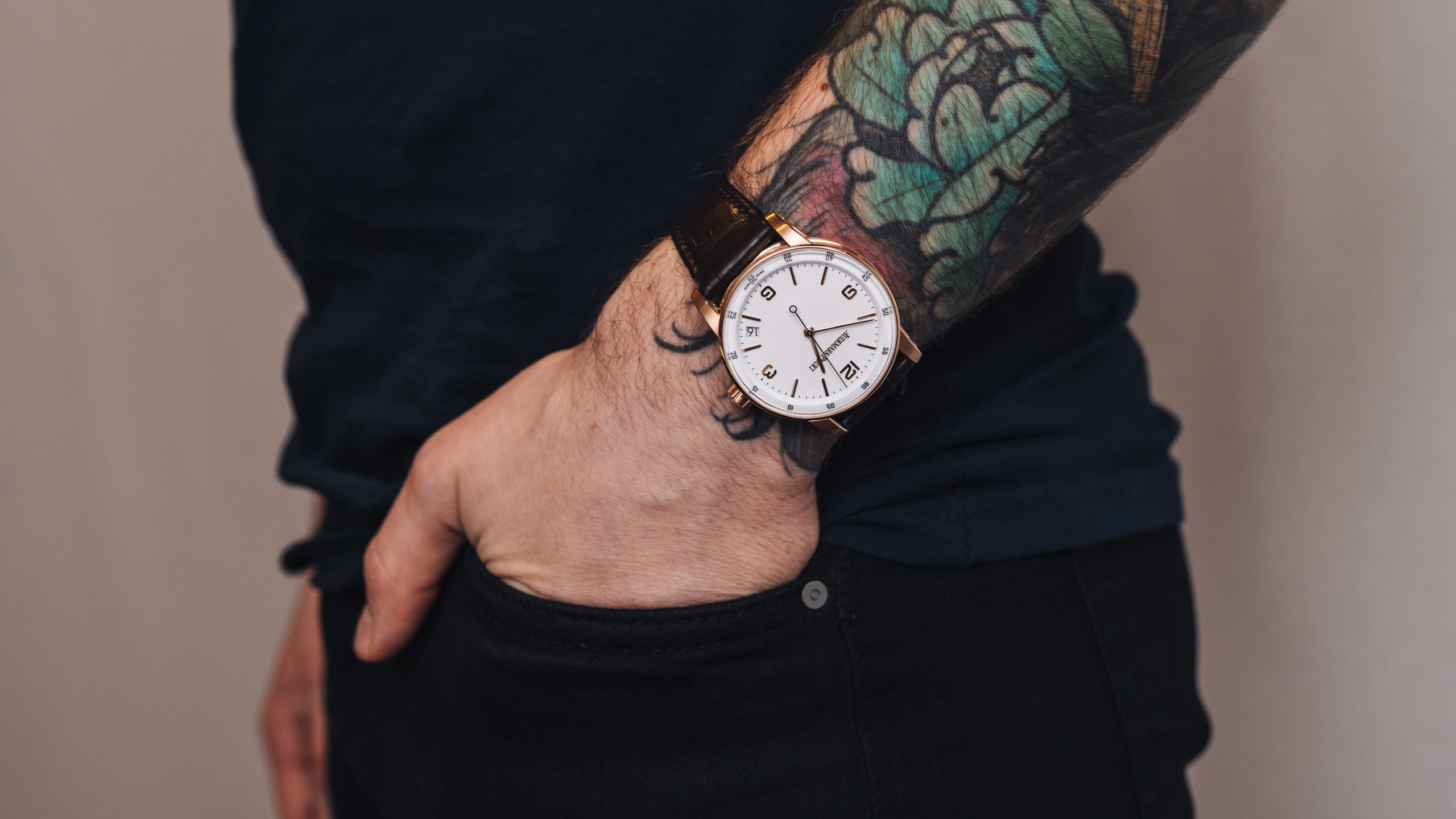 Swiss luxury watch brand Audemars Piguet, also considered a part of the Holy Trinity is known for producing some of the most iconic watches in the watchmaking history such as the Royal Oak. And while AP like any other brand has kept its collection (which currently comprises several Royal Oak variations) updated, the brand hasn’t come up with something new and refreshing for a while. But fans of the brand can now rejoice as AP has finally introduced their new collection and it’s called the Code 11.59. Apart from the quirky naming convention, this new collection comprises 13 new models with four automatic three hand models, four chronographs, one perpetual calendar, one-minute repeater, two automatic flying tourbillons and one tourbillon with an open-worked dial.

Tying the entire collection together is the new 41mm distinctive case design which is an interesting mix of several geometries and features an octagonal mid case sandwiched within a round case with angular skeletonized lugs. Powering these new watches are six different in-house movements out of which three are new: an integrated column-wheel chronograph with flyback function, a self-winding with seconds and date indication and a self-winding tourbillon calibre. So, let’s have a quick look at what each model has to offer.

Presented with either a black, blue or a white lacquered dial, this is one of the simpler looking watches out of the lot. The dial has been neatly laid out with a high focus on legibility. The applied hour markers are a mix of Arabic numerals and three-dimensional batons and give the dial a nice sense of depth. The minute track consists of printed hash markings along with numbers at intervals of five which have been positioned above a broad and tall chapter ring on the outer periphery of the dial adding a lot of visual interest to it. The trapezoidal date window has been neatly placed between 4 and 5, but it does stand out a little. The hour and minute handset reciprocate the silhouette of the applied hour batons and the second’s hand is needle-shaped with a circular counterbalance. Made of three layers of gold, the logo on the watch is achieved through a chemical process similar to 3-D printing known as galvanic growth. Powering this watch is the new calibre 430 which operates at a frequency of 4Hz and offers a healthy power reserve of 70 hours. The watch would be made available in either a pink gold case (for black and white dials) or a white gold case (for blue and black dials) and would retail at a price of CHF 25,000.

Just in case you found the three-hander to be a little too plain Jane, you might want to have a look at the busier looking chronograph option. This watch features a tri-compax layout with two large sub-dials at 3 and 9 representing the 12 hours and 30 minute counter respectively and a running second’s sub-dial at 6. The hour markings are once again applied batons with the exception of the Arabic numeral at 12. The tall and broad chapter ring is still present but this time around it houses a printed tachymeter scale. And yes, the date window has not been forgotten and maintains the same position as seen on the three-hander. Overall, the dial has been neatly laid out and is quite easy to read especially for a chronograph. Powering this watch is once again a new in-house calibre 4401, which is an integrated chronograph automatic movement with a flyback function that enables the chronograph hand to re-start without stopping and resetting it first. This watch would be available with a pink gold or white gold case combined with either a black or a blue dial. The watch would retail at a price of CHF 39,500. 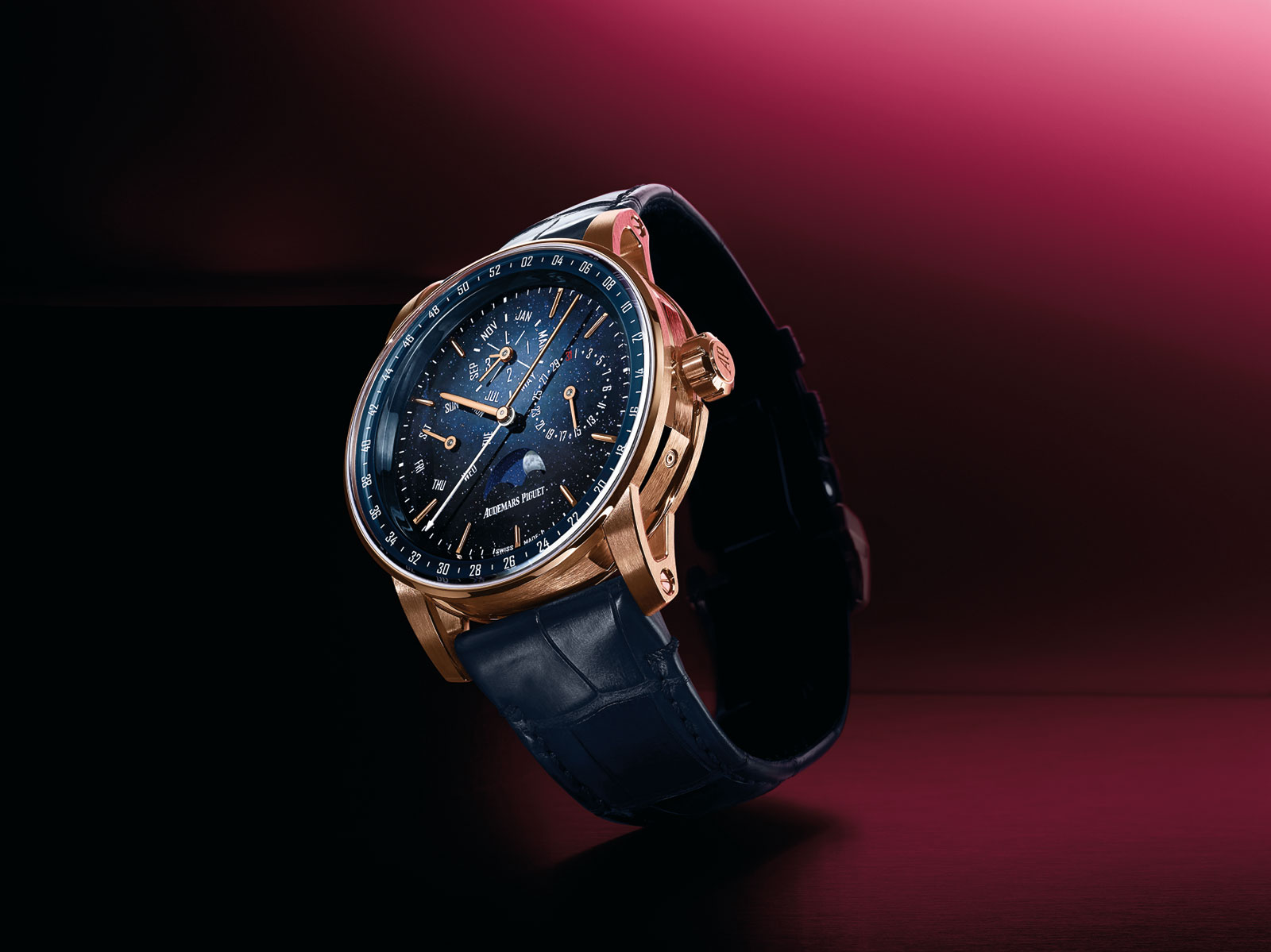 As the name suggests this watch presents the perpetual calendar complication which has been thoughtfully presented on a beautiful blue aventurine dial. Most of the information has been displayed using sub-dials, with the year at 12, the date at 3, the day at 9 and a romantic moon phase complication at 6. The sub-dials have only been printed and not recessed to maintain the coherence of the dial which is meant to depict a starlight sky. The outer periphery has this time been used to showcase the week of the year and can be read using an arrow tipped white hand. The watch is powered by the self-winding manufacture calibre 5134 with the collection’s signature open worked oscillating weight in 22k gold. The movement operates at a frequency of 2.75Hz and offers a power reserve of around 40 hours. This one comes equipped with a pink gold case which provides a great contrast against the blue dial. The watch would retail at a price of CHF 69,500. 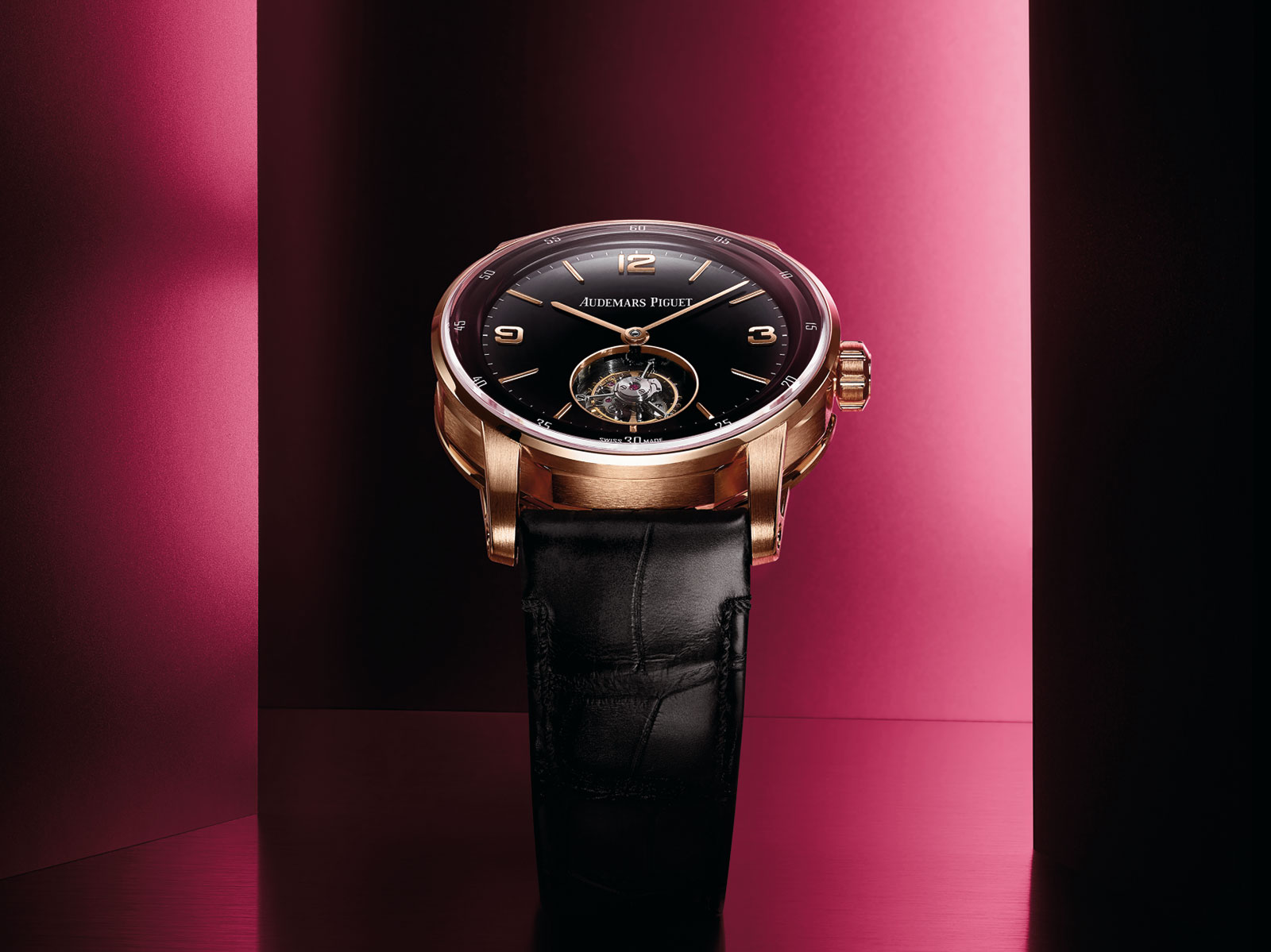 Featuring a flying tourbillon, which can be viewed through the large cut-out at 6, the dial on this watch is simple yet stunning. It has been made using the “Grand Feu” enameling technique and has been rendered in a deep black or gradient blue color scheme. The hour/minute markings follow the same format seen on the three-hander and provide great contrast against the dials. The watch is powered by the brand’s in-house calibre 2950 which operates at a frequency of 3Hz and is the first Audemars Piguet movement to come equipped with a central rotor and a flying tourbillon. The watch would come with either a Pink gold case with black dial or a white gold case with the gradient blue dial and would retail at a price of CHF 129,000.

This is basically the artistic version of the flying tourbillon and I meant to showcase the complicated yet beautiful internal workings of a mechanical watch. The open-worked dial gives a clear view of the calibre 2948 which is manually wound and operates at a frequency of 3 Hz. The movement has a thickness of 4.97mm and has been hand finished with around 70 V angles exhibiting the skill and craftsmanship of the brand’s watchmakers. And while this movement does not have a base dial it still manages to be decently legible courtesy of the dark finishing on the movement as well the printed minute markings on the outer periphery. The watch would come in a pink gold case and would retail at a price of CHF 175,000. 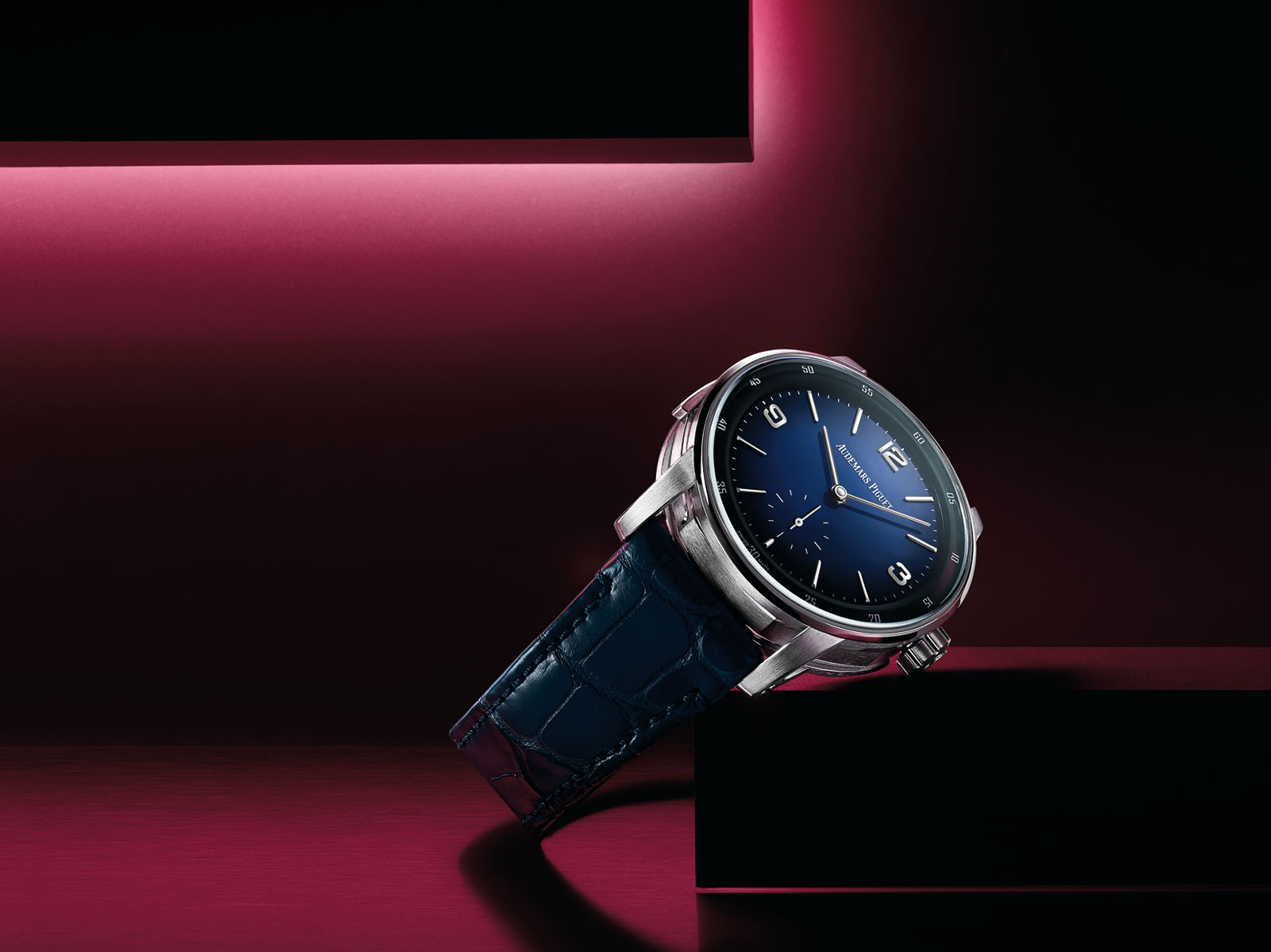 Finally, we have what we feel is the hidden gem within this new collection, the Minute Repeater Supersonnerie. Powered by the hand-wound calibre 2953, this watch features an exceptional minute repeated concept introduced by Audemars Piguet a few years back. Excellent sonic performance is achieved through a unique case construction, striking regulator and gongs that are not attached to the main plate but to a new device acting as a soundboard. The smoked blue dial looks incredible and features the familiar layout of the three hand model with the exception of the central second’s hand being replaced by a sub-seconds dial at 6.

To conclude, we would like to say that the Code 11.59 is an impressive new design direction for the brand which dare we say would help them come out of the shadow of the Royal Oak collection. The Code 11.59 collection features some really intriguing watches with some fine details and before you tear us apart in comments section and call us biased and calling this a poor effort by the brand, allow us to assure that having handled these watches personally we found them to be high-quality effort similar to anything else you have seen from the brand before. Yes, the design might appear to be a little conventional in the first place but it does tend to grow on you. Visit Audemars Piguet here.