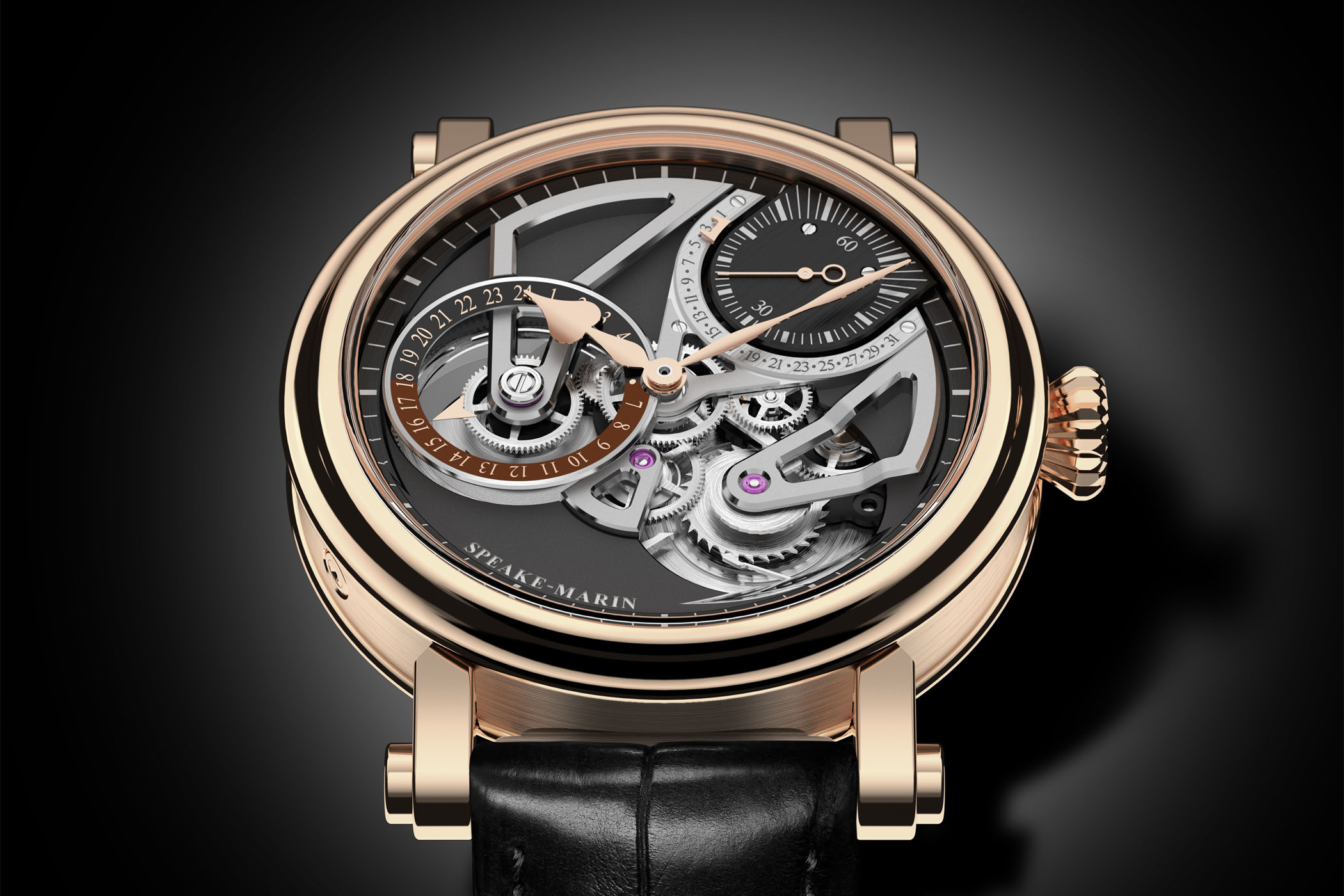 Now that Speake-Marin no longer has its namesake on board it’s got to work hard to innovate and keep up its reputation. The One&Two from the brand was introduced a couple of years ago, and now it’s come back. Fusing elegance with technical sophistication this Swiss/British watch has a lot going for it, and in this case, it’s a dual timer as well. 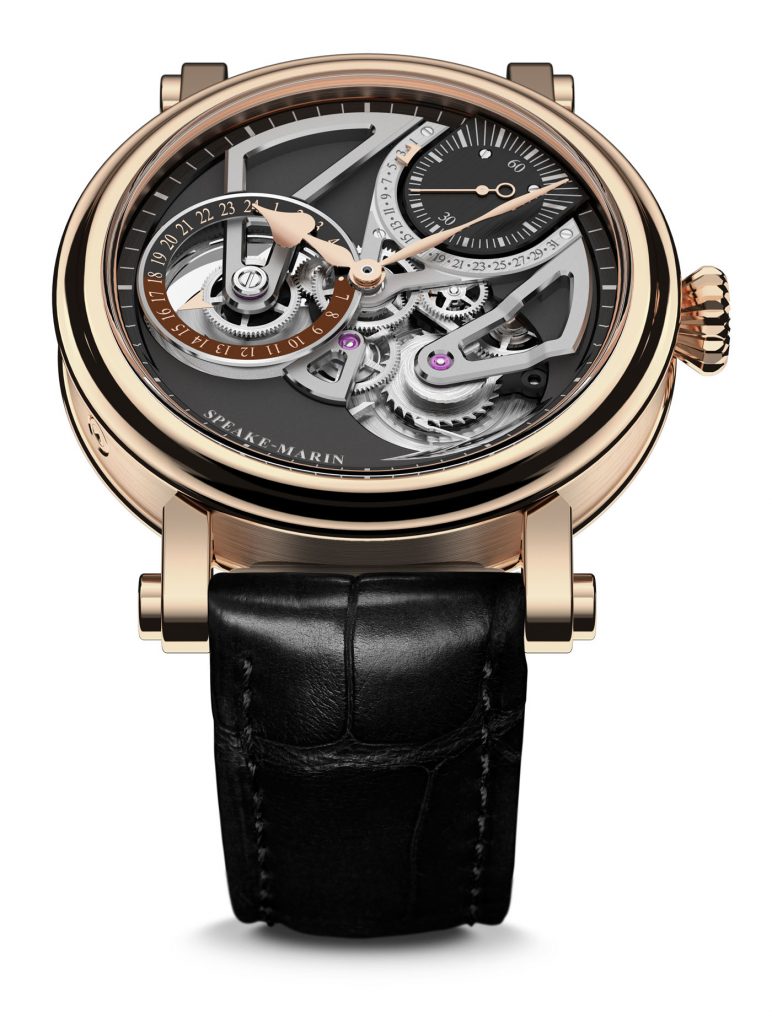 Inside the watch is an in-house made movement, the calibre SMA02 is an automatic winding movement with a 52-hour power reserve, 36 jewels and a run speed of 28,800 vibrations per hour. The angular bridges give it a sophisticated appearance which contrasts well with the flowing shape of the hands, and a buzzsaw style gear on top of the barrel adds to the look. You can also see the gearing mechanism behind the 24 hour hand which makes up the second time zone indication, which comes complete with its own two-tone colours.

Wrapping itself neatly around the slightly odd seconds subdial, which is inclined towards the centre of the watch rather than down, is the retrograde date indicator which flows in a horseshoe shape, I’ve never seen anything like that before as far as I can remember. There is a small pusher in the side of the case which advances the date forwards, so it’s perhaps not as practical as most watches which adjust through the crown. It’s probably safer for the retrograde mechanism though, or something like that. 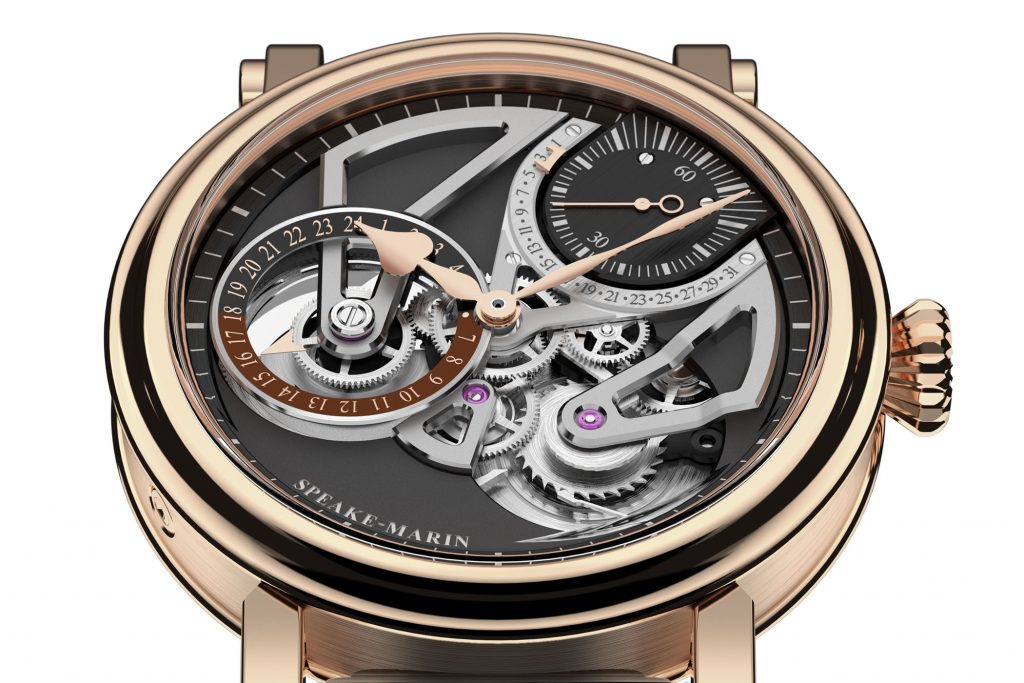 Concerning availability with this watch being a Speake-Marin it’s naturally not very available. This one especially, it’s limited to just 20 pieces in the 42mm case size, but there is a 38mm case size as well. That’s also limited to 20 examples, too. Both cases come in red gold only, for the larger 42mm sized watch the price will be 38,700 Swiss Francs, so, while we don’t have a price for the smaller 38mm watch at this time, I’d expect it to be between 33k CHF and 35k CHF. Both watches also have a sapphire crystal on the front and back, and the case keeps the movement dry to 30 meters. Visit Speake-Marin here.