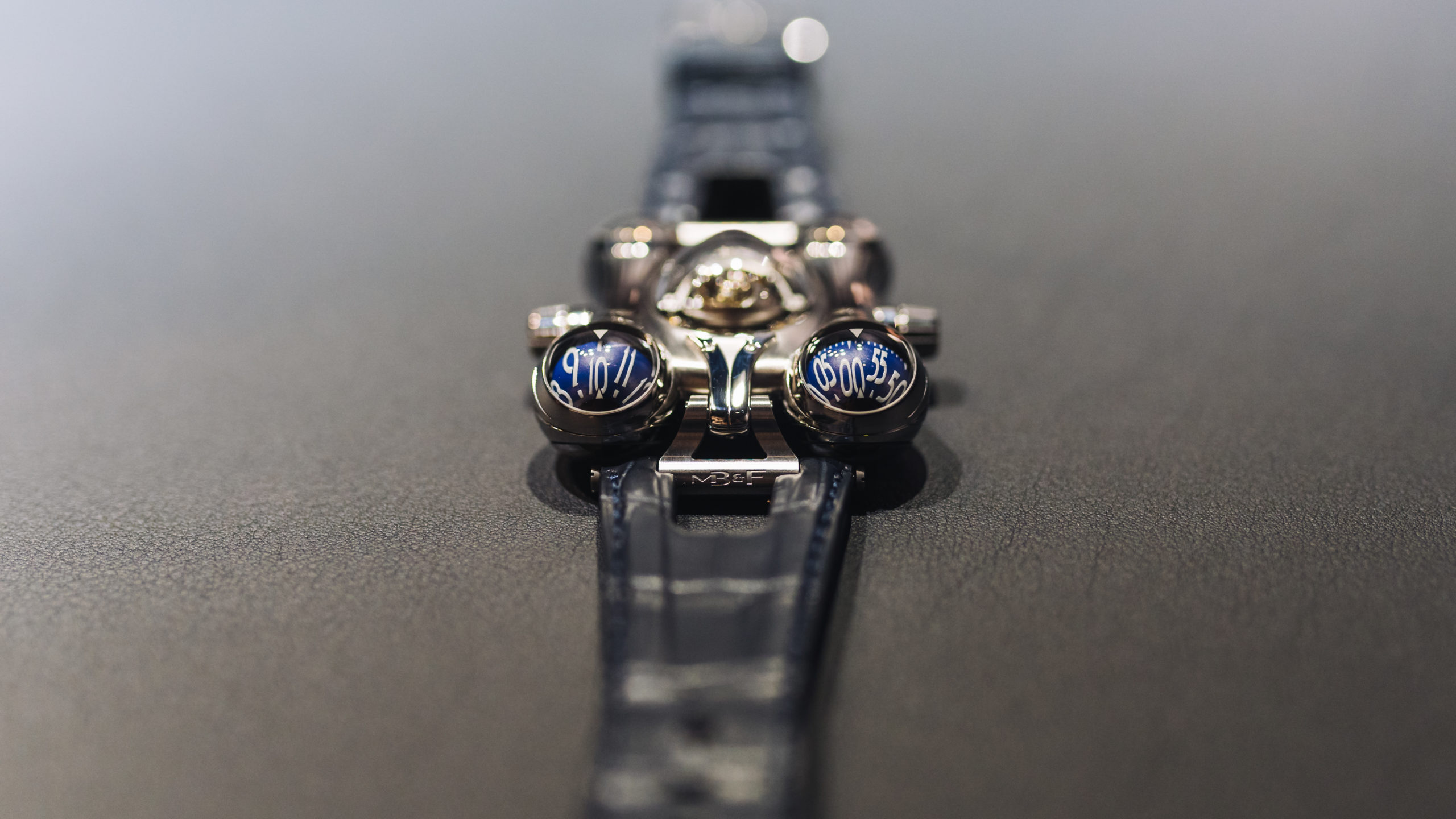 Not conforming to the rules of corporate watchmaking is something Maximilian Büsser has managed to do exceptionally well. Among the watch community, MB&F is synonymous with weird and whacky UFO shaped watches that appeal to even the classiest gentlemen. MB&F is an artistic concept laboratory based on a simple idea: to assemble collectives of independent watchmaking professionals to develop radical watches – Horological or Legacy Machines.

MB&F is notorious for its mixing of playful out-of-this-world designs with some serious mechanical work under the bonnet. Simply described, the timepiece is a wearable UFO. Like its predecessors, the Final Edition looks more like a spacecraft than a watch and the use of stainless steel for the 52-mm case and blue colour motif on the platinum oscillating weight, numerals, and markings only accentuate this. 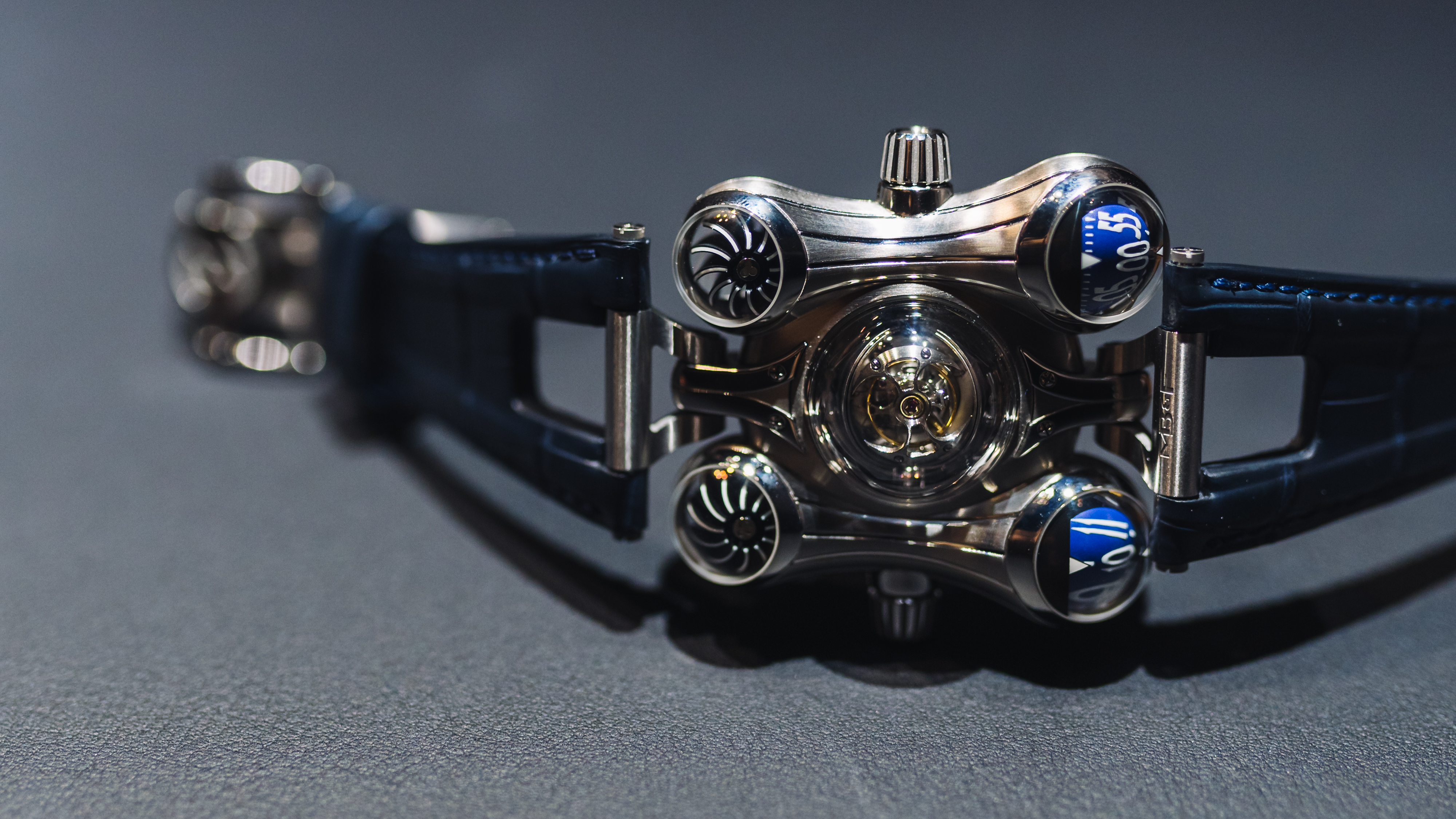 All good things come to an end, and that is the case with the fabulous journey of the watch anomaly that is MB&F’s HM6. First started in 2014 with its inaugural titanium edition, the company was quick to follow over the following years by releasing the beautiful red gold version in 2015, the Sapphire Vision model in 2016 and the HM6 Alien Nation (my personal favourite) in 2017. But now its time to say goodbye with the MB&F HM6 Final Edition in Steel. 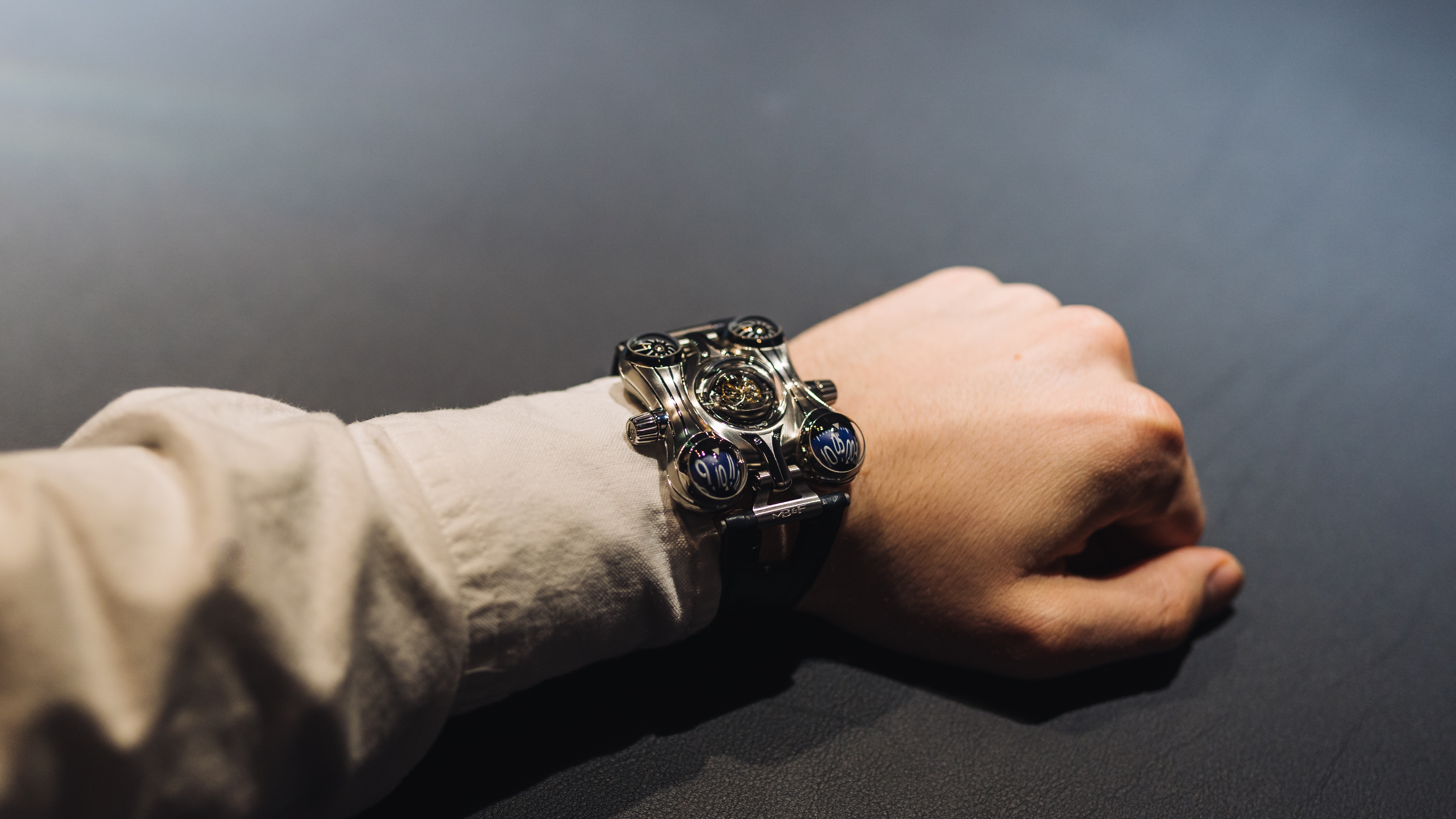 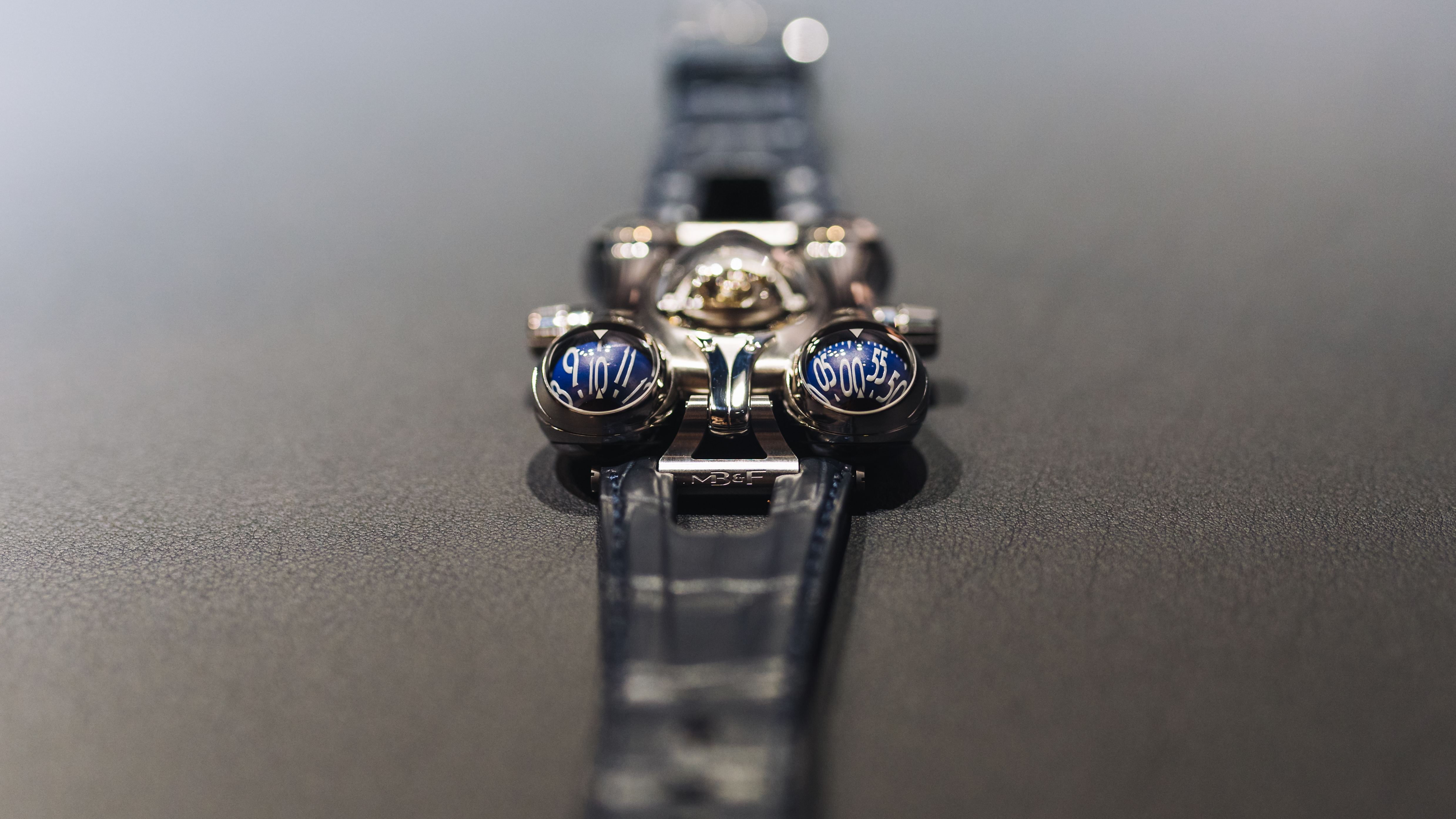 The inspiration for HM6 came from a Japanese anime TV series from the 1970s and 80s: Capitaine Flam (Captain Future in English). Capitaine Flam’s spaceship was called the Comet and consisted of two spheres joined by a connecting tube. Put two such craft together and the seeds of Space Pirate were planted. The curved lines of HM6 make it a softer, more organically shaped Machine than its predecessors. The inspiration for this came from the biomorphism art movement, which takes its cues from design elements based on the shapes of living organisms.

In each of the four corners of HM6’s biomorphic case is a 360° sphere, capped top and bottom by transparent sapphire crystal domes. Up forward, two spheres rotate vertically respectively displaying hours and minutes. Back aft, the twin spherical turbines spin, regulating the automatic winding system to reduce stress and wear. The transparent cupola on top houses a flying tourbillon and offers a tantalizing glimpse into the sophisticated engine inside.  According to MB&F, this is the second tourbillon made by the company and the first flying tourbillon. 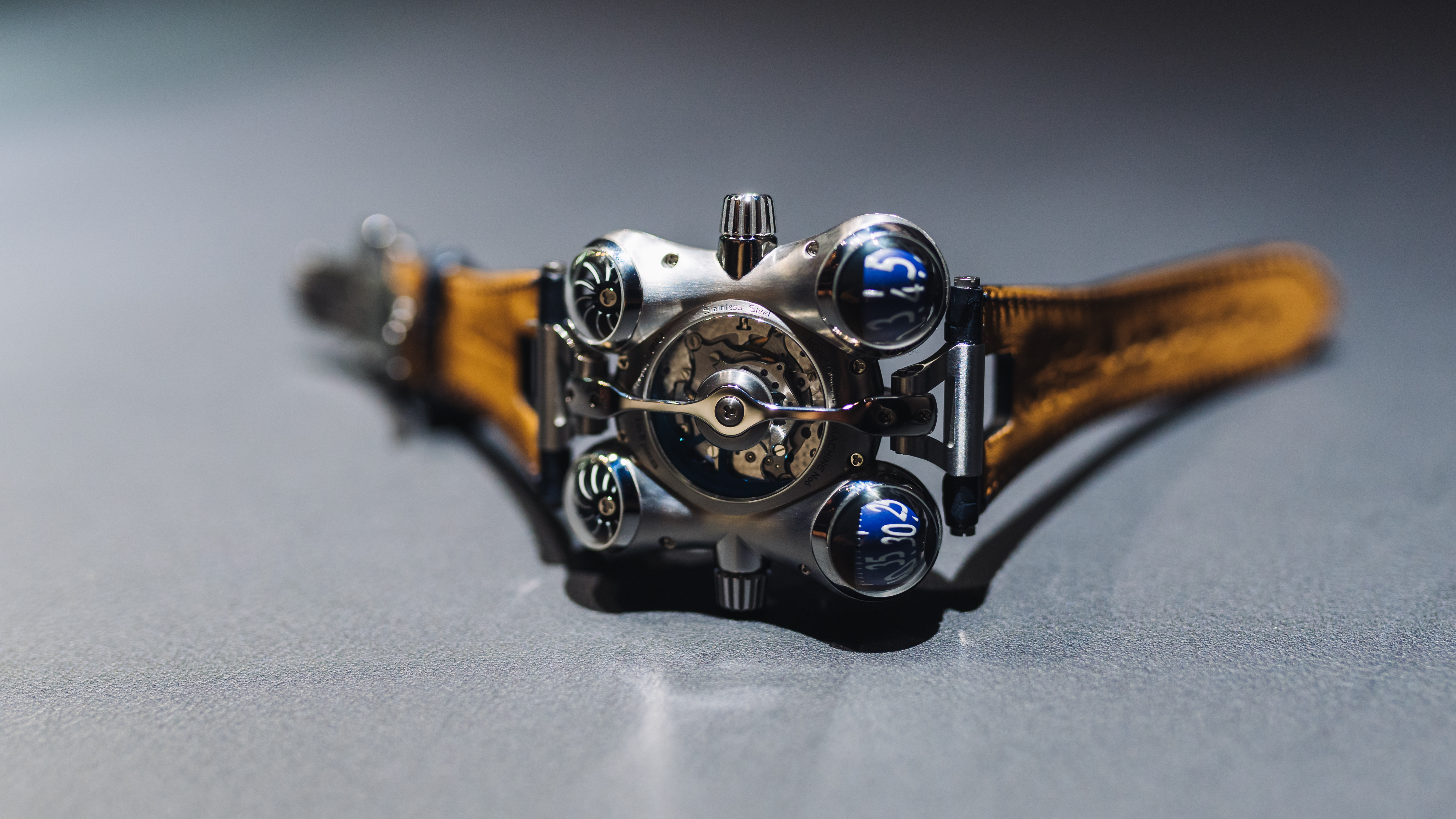 The sapphire crystal display portal on the back reveals more of the 475 finely finished components making up the highly complex movement, which required over three years of development.

Like all other HM6s, the Final Edition comes with a retractable shield that protects the tourbillon from UV radiation by enveloping it with four overlapping, curved blades operated by a crown on the left side of the case. Though the Dual Spherical Turbines make give the illusion that the timepiece may be a drone, it has a practical purpose besides being for show. Each turbine is composed of no fewer than 15 curved vanes machined from solid blocks of aluminium. Connected to the winding rotor by a gear train, they automatically regulate the winding system to reduce stress and wear, hence increasing the longevity of the watch. 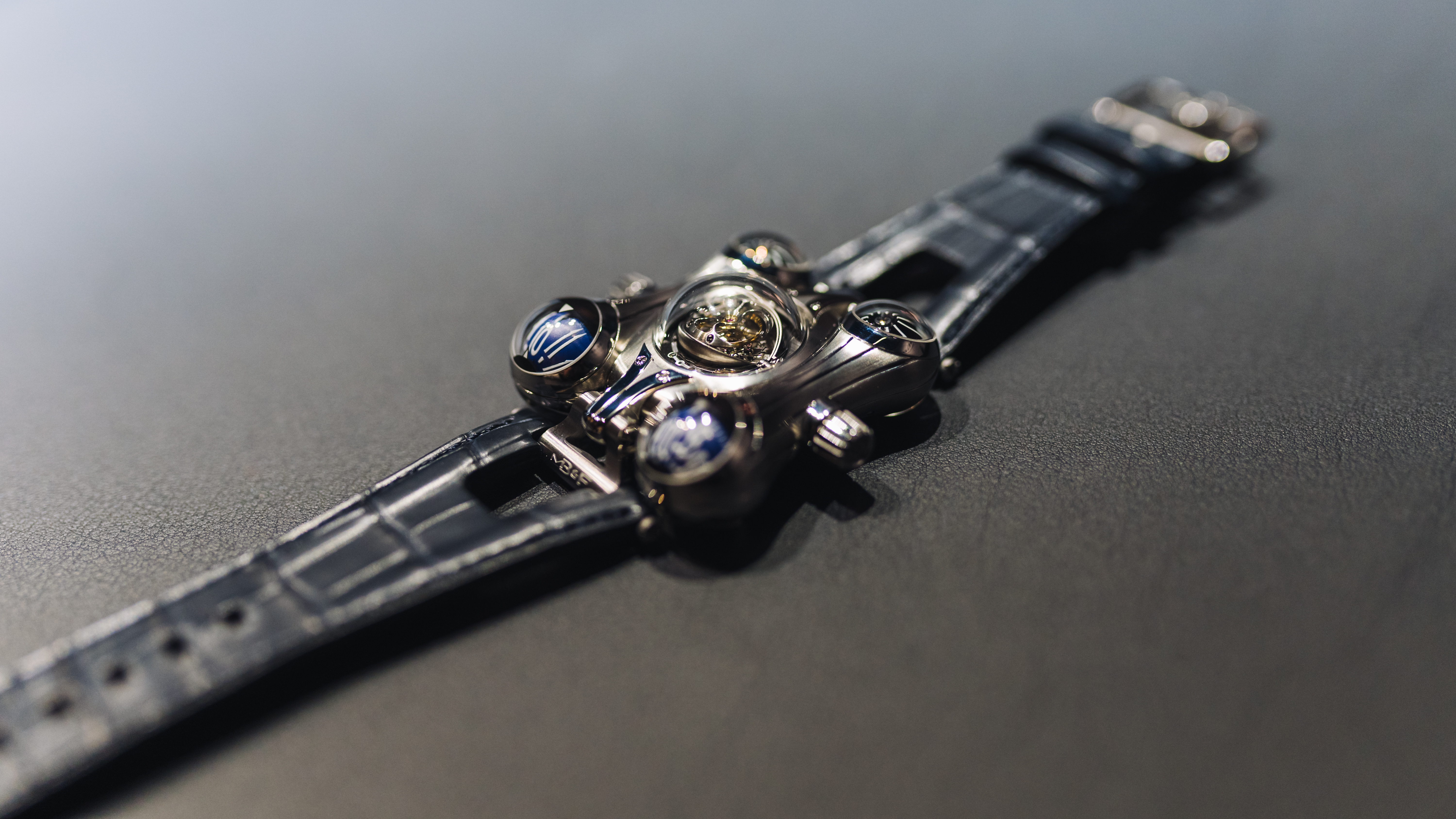 The Final Edition has a 72-hour power reserve and a frequency of 2.5 Hz (18,000 bph). The stainless-steel case is made of 85 parts, has nine domed sapphires and one flat one for the reverse, and it is water resistant to 30 m (90 ft, 4 ATM). Unlike the previous versions, here the hours and minutes are displayed in white on deep blue globes. The numerals are coated in Super-LumiNova® and take on a light blue colour when plunged into darkness). The strap with matching steel buckle is made of alligator hide.

The MB&F HM6 Final Edition in steel will be a limited edition of 8 pieces only – making the whole HM6 collection a 100-piece series. Price will be CHF 210,000 (excl. taxes) and the watch will be shown during SIHH 2019. Visit MB&F here.