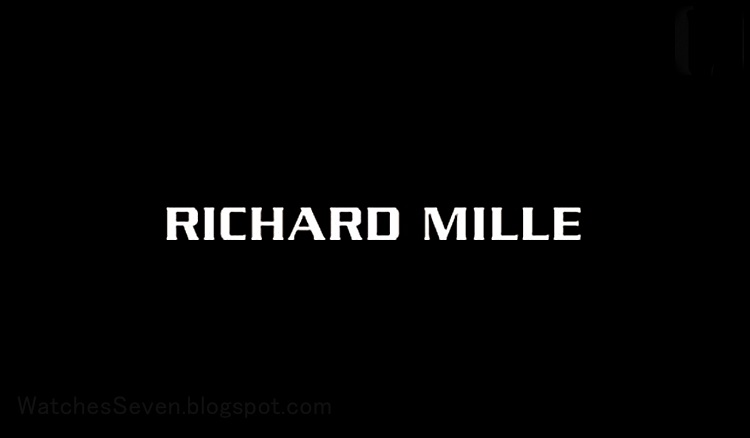 Six of the SIHH 2014 Lineup From Richard Mille

The RM 50-01 has a case created from carbon NTPT. This new carbon material is a Richard Mille unique blend and is said to be able to achieve an unbelievable level of strength and rigidity. Apart from this material, a couple more unique features of this watch are the manual winding tourbillon chronograph caliber and a mechanical G-force sensor. 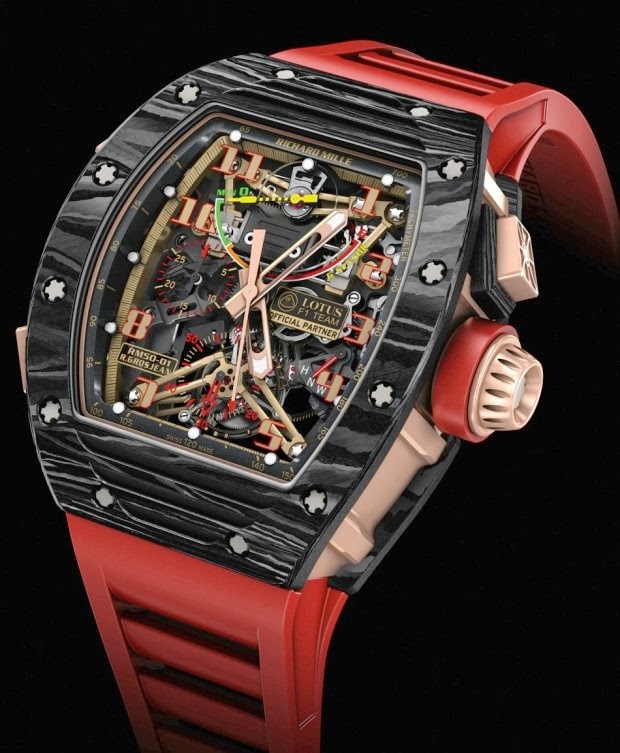 This watch was designed to commemorate the brand’s tie-in with the Lotus F1 Team last year and especially dedicated to one of the drivers, Romain Grosjean. It is one of the most wicked looking watch around right now and I like it!

The Richard Mille RM36-01 incorporates a mechanical G-Sensor technology. Made to commemorate the rally driver Sebastien Loeb, this watch measures 48 mm across and 17.5 mm thick. The function selector that allows adjustments to be made is incorporated in a pusher set into the crown. 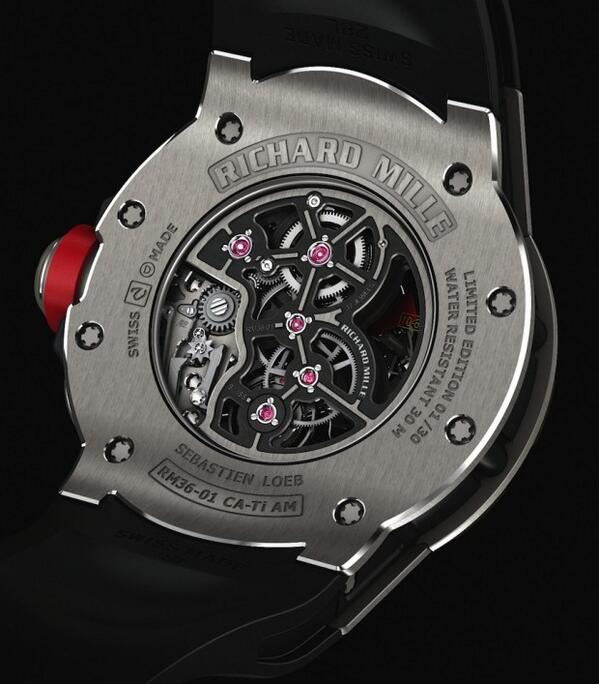 The watch uses a manual wind caliber that includes a tourbillion. Its call to fame is the G-Sensor that is located at 12 o’clock. Able to measure up to 6 Gs, the mechanism has a very interesting resetting mechanism. Situated at the centre of the dial is a pusher that comes out of the dial through a hole in the crystal.

Honestly, I not sure what the purpose of such a complication to have on a watch. There are many smart phone applications that can to the same, more accurately and with more detail.

I do welcome the rounded case though. This is more preferable to me compared to the boxy shape Richard Mille is more associated with.

This is the second collaboration between Richard Mille and Rafael Nadal. The first was the RM 027. Using the latest exotic material, the NTPT ® technology recently developed by Richard Mille, the watch case has a very interesting Damascus steel look to it. 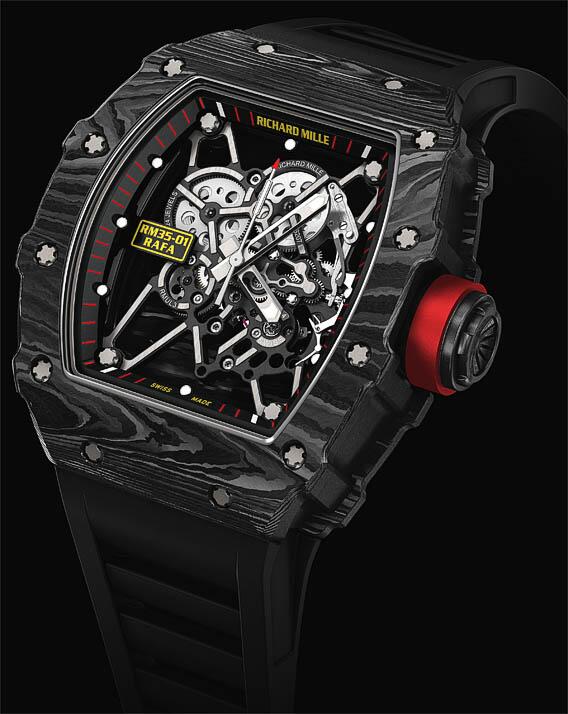 The watch utilizes the Calibre RMUL3, a skeleton manual winding movement. The RMUL3 is designed to absorb punishing impacts exceeding 5,000Gs. With the use of titanium grade 5 black PVD throughout the movement, Richard Mille was able to create a movement that weights an astonishingly low weight of just 4 grams.

I do have one view with this particular piece. I was made to understand that the case-back for this watch is solid. If that is so, wouldn’t it be better if an automatic movement be a better option for this watch?

Last year Richard Mille introduced the RM 59-01 tourbillon for the Olympic medalist Yohan “The Beast” Blake. For 2014, this new offering, the RM 61-01 is similar in concept except for subtle changes here and there. The more prominent one is the green flying bridges. Now there is only two instead of 4 previously. The case is no longer semi-transparent as the previous model. 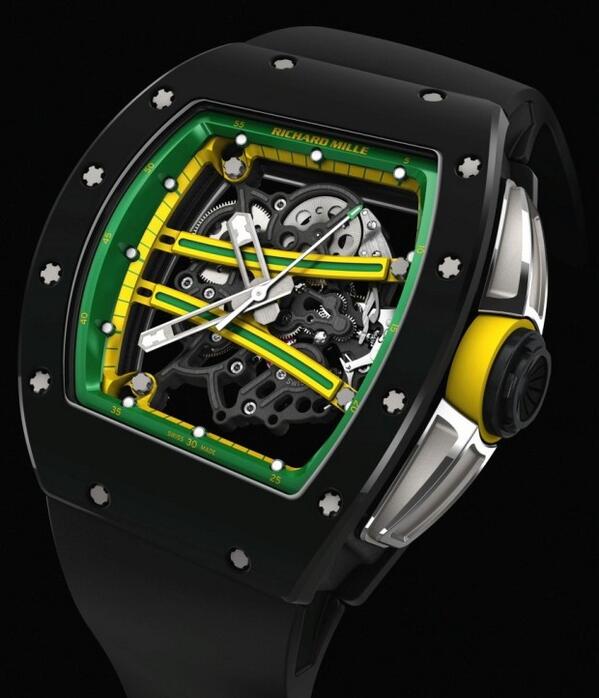 The material for the bezel is also new. TZP is an extremely-hard black ceramic material with a low density (made out of 95% Zirconium compound stabilized with Yttrium). Meanwhile the RMUL2 movement with 55 hours power reserve is built in grade 5 titanium treated with PVD and operating at the 4Hz range.

I actually prefer this model than last year’s RM 59-01. The solid bezel makes it more refine compared to the transparent RM 59-01.

The Richard Mille RM 60-01 is a large watch in the 50 mm category. Made out of titanium case and powered by the grade 5 titanium RMAC2 caliber, this automatic watch by Richard Mille is its first attempt at making a useful sailing watch.

The RMAC2 caliber is able to operate for 55 hours on a full charge. A highly capable caliber, it has variable inertia balance, fly-back chronograph functions, annual calendar, date and UTC functions. 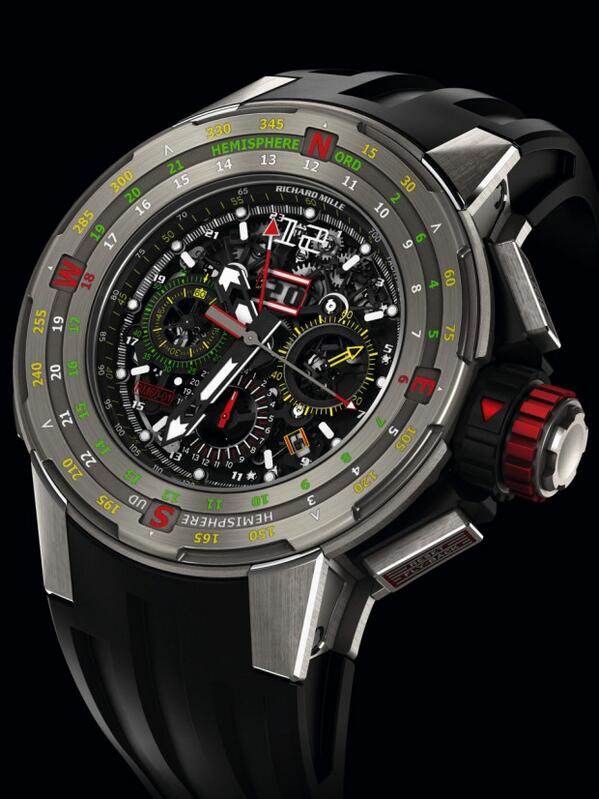 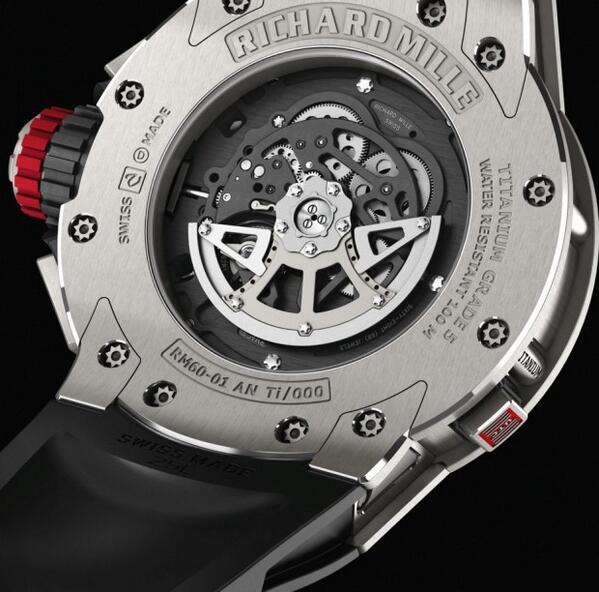 A unique function available on the RM 60-01 is its ability to correctly point to the correct compass direction by using just the position of the sun and the local time. This ability is made available by the presence of a special rotating bezel with indications of the four compass points combined with a graduated 360° and a 24-hour scale disk. The added advantage of the system used in this watch is its ability to orientate within the northern as well as southern hemispheres without any additional calculations (I do own a few watches with the map function and it gets confusing if you forget the right way to use for different hemispheres. Hence, I see the value of the system used on this RM 60-01).

For the chronograph function, Richard Mille has added a special quick locking and releasing mechanism. Locking (red arrow) and unlocking (green arrow) the flyback chronograph pushers requires only a quick turn of the secondary crown.

As a piece of art, the dial is first class. However for a serious nautical tool, it is too busy for effective use while on board a sailing boat. There is too much information on the watch to confuse the user momentarily.

The view from the back is another matter. To me it’s a beauty.

The Richard Mille RM 63-01 is smaller than the other five watches under the 2014 line up. At just 42.7 mm in diameter and with just a thickness of 11.7 mm it can easily be mistaken to be part of the ladies collection. Made out of 18k gold (Au750), it is powered by the new automatic caliber CRMA3 with 50 hours on a full charge. 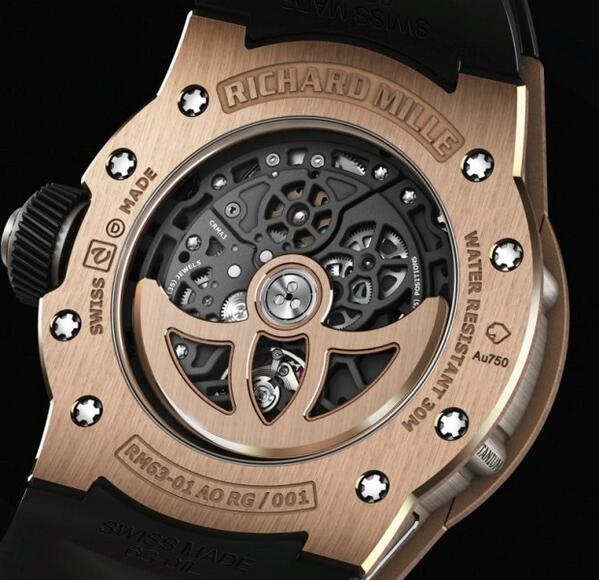 This watch has a function that does not generate any utility except to generate humour and a bit of mystery. Similar to a Frank Muller “Crazy Hours” or Hublot’s “Key of Time” time pieces which shows time moving at a different pace than usual.

By depressing a pusher at the centre of the crown, it activates a mechanism that causes the sapphire glass dial begins to slowly rotate counterclockwise while the hour hand moving clockwise, both at different speeds. Depressing the pusher again and everything goes back to normal.

Sometimes it’s fun to have something to smile about and this weird complication does the trick.