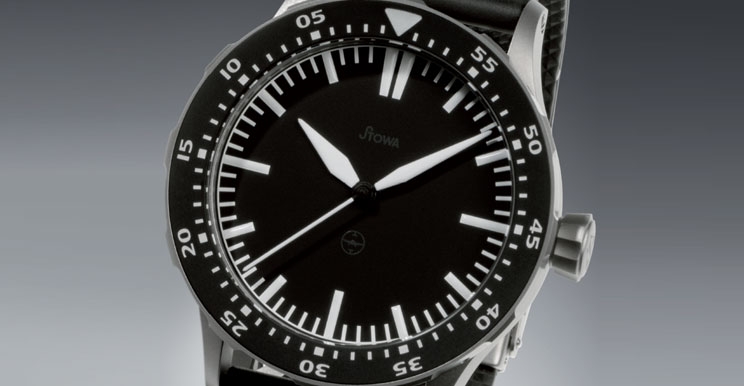 Why this new watch

To be honest: We simply want to produce even better watches.
With the certification of the FH Aachen it will be possible for the first time to test the quality of the watch in a scientific developed procedure. Function, design and quality have to pass a complex testing procedure. For STOWA it was immediately clear to participate. Of course we continue to build our traditional and historical seeming pilot watches. But with the FLIEGER TO 1 TESTAF we want to go one step further into the future. The name of the new watch is program:
TO1 = technical optimized.

The history of the STOWA watch starts already in the 1930‘s
Since the late 1930‘s STOWA is closely involved with flying. Since that date we continually build pilot watches. Due to their clear readability and the simple design they already achieved classical status. At that time the watches were relatively big (55 mm diameter) so they could be worn for example over a leather jacket. STOWA always concentrated its attention on the future. For this reason we have reinterpreted the former pilot watches and developed them further by exploiting all technical possibilities.

The new standard for pilot watches in the watch industry. Developed by FH Aachen.
With the project „technical standard of pilot watches“ (in short „TESTAF“) for the first time a precise technicfunctional requirements catalog is submitted. This catalogue determines the regulations wrist-pilot watches with analogue time display have to fulfill nowadays in the civil air traffic in regard to sight- and instrument flight rules.
In the last years the term pilot watch became an arbitrary term. Concrete functional and technical requests faded into the background.
Therefore the FH Aachen developed and submitted in cooperation with the watch company Sinn this new standard. Until now there was no clear definition for pilot watches (like for example for diving watches, DIN 8306/ISO 6425). This gap will now be closed with the TESTAF certification. STOWA wanted to test its 70 year experience in building pilot watches and decided immediately to participate in this certification procedure.
The new model FLIEGER TO1 TESTAF is currently tested at the FH Aachen and it is planned that the certification will be terminated by May/June 2013.
Of course you can see the watch “live” in our company or also in our online-shop. You receive the complete information to the TESTAF certification under the following link: www.testaf.fh-aachen.de

Readability
We specially focus our attention to the design and readability of the watch. For example the contrast of the dial marking and hands to the background of the dial. The brightness adaption between marking and background has to be under standard conditions at least 14:1.

Shock and vibration resistance
The shock- and vibration tests are very sophisticated. Each test for itself is a challenge. The shock resistance is tested according to DIN 8308/ISO1413 which is equivalent to a fall from one meter height on the ground. After this fall the watch still has to run in the required tolerance. No part of the watch may cease its function. This is similar to the vibration test which toughly tests the watch by varying frequencies.

Operability
To assure a tactile feedback the swivel which is turnable in both directions has to have a noticeable minute catch. The function of the operating elements has to be ensured over the complete temperature range (-15 up to +55 degree Celcius).

Ambient pressure
Due to the frequent pressure gradients and the partially extreme situations during the flight a watch certificated by TESTAF has to pass special pressure tests. For example a pressure difference of 0,261 bar has to run at least 2000 times to simulate a cycle change of the ambient pressure of 1.013 bar up to 0,752 bar to 1013 bar. This test simulates 2,000 starts an landings.

Magnetic Signature
A watch in close proximity (10 mm) which was previously degaussed with a customary device used in the watch brand may not influence a customary magnetic compass which was approved for the use of aircrafts by more than 2.5°.

G-mechanical test
The watch has to resist an acceleration of 6-G in each position (dial above and below, 6 above, 9 above) during at least one minute in each case.

Light reflexions
To avoid the blinding effect on the crew members as well as to guarantee readability while wearing the watch the light reflexions of the crystal have to be widely reduced by antireflection according to the state of the art. Light reflections of the dial, the hands, the indices, the strap and the buckle can also be widely reduced by a suited process resp. design of the surface.

Resistance to liquids typical during air traffic
Case, glass and sealants may not be damaged during occasional and short contact with those liquids at an ambient temperature of +23°. Those liquids are for example fuels like Kerosin, gas, diesel but also de-icer agents like ethylene glycol or propylene glycol which are very aggressive as well as oils and lubricants.

And how we effectuated the requests of the TESTAF criterions.
After having intensively studied the requirements catalogue of the TESTAF criterions some basic features were set:
• Use of a titanium casing due to the magnetic signature of stainless steel. A stainless steel housing would for example influence the classical compass which is used in an airplane.
• Undetachable bezel construction.
• Special thick sapphire crystals to resist safely the shock testing.
• Viton seals for crown and case. Viton is a sealing material which is besides others used in space flights.
• Special thick luminous color coating in white (Superluminova BWG 9) achieve a perfect contrast.
• Screwed lugs