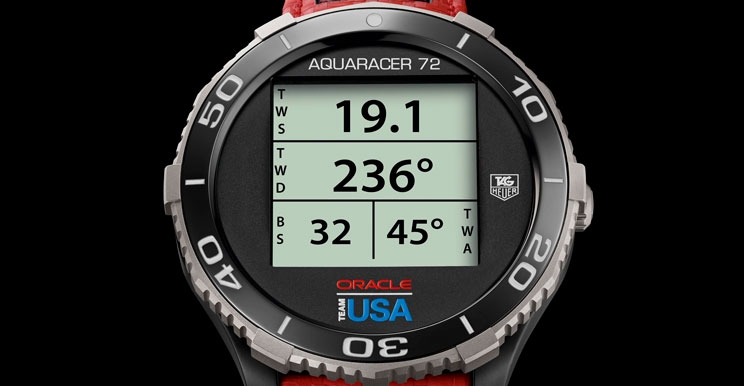 DURING THE 34TH AMERICA’S CUP, EVERY CREW MEMBER OF THE DEFENDING CHAMPION WEARS AN ULTRA-INTELLIGENT “EXTREME” EDITION OF THE AQUARACER 72 CO-DEVELOPED WITH THE TEAM’S OFFICIAL PARTNER TAG HEUER

For this year’s 34th America’s Cup, the R&D departments of TAG Heuer and ORACLE TEAM USA co-invented onboard connectivity equipment and an ultra-innovative and intelligent smartwatch that give every crew member instant access to crucial race condition data in real-time.

The embedded system uses special editions of the commercial AQUARACER 500M CALIBRE 72 COUNTDOWN chronograph, customized for each sailor’s specific tasks and wirelessly linked directly to the boat’s onboard computers.

“This was a first for sailing and a first for Swiss watchmaking,” said Stéphane Linder, TAG Heuer President and CEO. “It represents the next-generation of competitive sport technology. We’re looking forward to participating in similar ventures with teams across the full spectrum of professional sports.”

The extreme-tech and exceptionally resilient digital chronograph is the first watch designed specifically for and by a professional sailing team. At a glance easy-to-read with a wide-open 51mm face, it weighs only 108 g and is impact resistant to 5000 G. The leather-strap, like the case itself, is ergonomically designed to fit comfortably over a wet suit.

For the project, TAG Heuer drew technical inspiration from its watch, eyewear and telephony activities. The Aquaracer 72 uses the brand’s patented “splashproof” technology, first used in TAG Heuer eyewear. The data processing equipment onboard the 72-foot catamaran was waterproofed using technology developed for the iconic TAG Heuer MONACO chrono. For the watches worn by ORACLE TEAM USA’s “grinders” — the sailors who man, at lightning speed, the boat’s winches during the crucial pre-start and tacking duels — the brand developed a special « heads-up display » with polarizing lens based on TAG Heuer Eyewear-developed photochromic technology. Jimmy Spithill, the team’s skipper, communicated with his crew on a waterproof phone, the RACER SUB NANO, strapped to his forearm, and outfitted with TAG Heuer MERIDIIST mobile telephony technology.

Only 50 of the special Aquaracer 72 were produced and none are available commercially.

But ORACLE TEAM USA and TAG Heuer fans, take heart: to celebrate its ongoing commitment — and the Aquaracer line’s three decades at the helm of luxury yachting excellence — TAG Heuer has launched a limited edition version of the ORACLE TEAM USA crew’s Aquaracer 72: the AQUARACER

500M CALIBRE 72 COUNTDOWN AUTOMATIC CHRONOGRAPH 43 MM. Named after the official length of ORACLE TEAM USA racing boat, stamped with the official “Team USA” logo on the dial and the iconic AC72 boat on its case back and waterproof to 500 meters, the CALIBRE 72 was co-designed by TAG Heuer and ORACLE TEAM USA and is the favorite of legendary skipper Jimmy Spithill and team’s CEO Sir Russell Coutts. With its unscratchable ceramic bezel, rubber coated pushers and screw-in crown, it is a true sailing countdown instrument, made to withstand the most extreme sailing conditions. The countdown function at 12 o’clock makes for instantaneous visualization of the 5 minutes before the official start of the race.

dial features a “Team USA” logo and has three sub-dials for the chronograph. It is powered by an automatic movement and comes with a 42 hour power reserve.

Aquaracer 500M Calibre 5
Also launched in 2012, the Calibre 5 edition has a 43 mm brushed steel case with a black rotating bezel and a brushed steel bracelet or black rubber strap. The dial features a “TEAM USA” logo with oversized hour markers at the 12 and 6 o’clock position and the date window is at the 9 o’clock position. The Caliber 5 watch is powered by an automatic movement with a 38-hour power reserve.

All three AQUARACER 500M have helium valves and proudly bear the official colors of ORACLE TEAM USA—red, black, and white—on the hands, pusher, and face.