The latest release by TAG Heuer, the Heuer Carrera Calibre 6 Chronometer (Ref. WV5111) is the one of two new releases for 2015. Taking cues from vintage Heuers, this watch aims to capture the spirit of racing while keeping to the tradition of iconic simplicity. 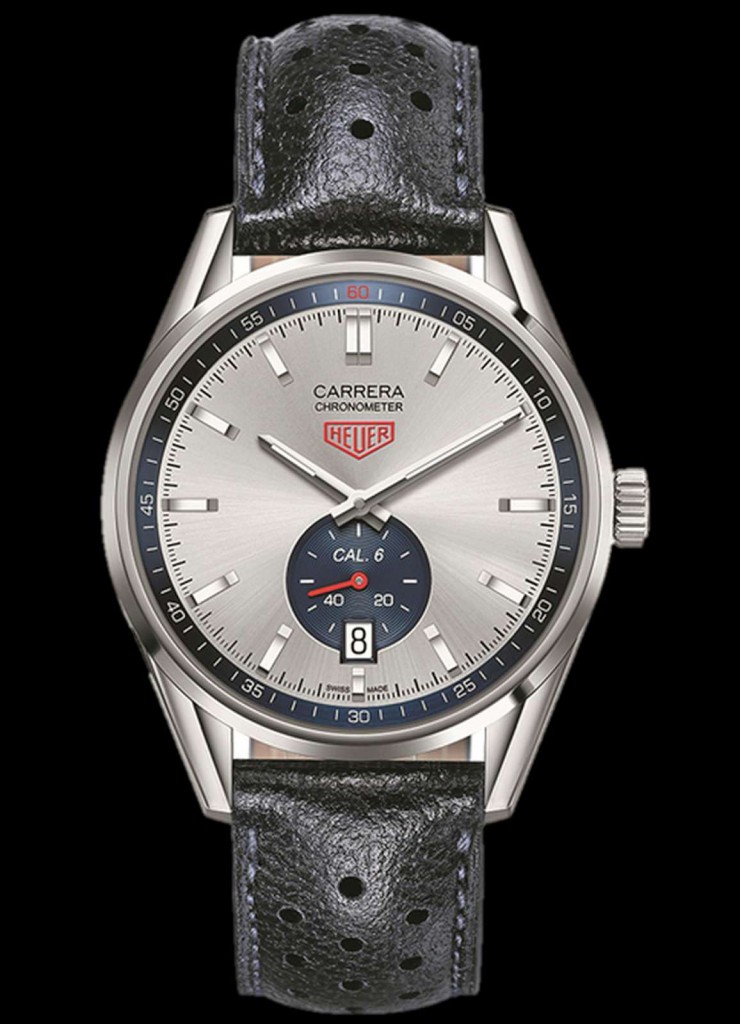 The COSC Carrera uses a 39 mm stainless steel watch case with a single dial option. A metallic silver paint covers the surface of the main dial. A metallic blue sub-dial for the seconds is situated center of the bottom part of the dial. A date window is situated at the bottom of the sub-dial. The same metallic blue paint is also used for the inner bezel offers a minute scale. The seconds-hand, the “60” mark as well as the “HEUER” logo is in red.

The whole dial is protected by sapphire crystal with double anti-reflective coating. The watch is only available on a blue perforated calfskin strap.

At the point of writing, the actual base movement used for the Caliber 6 was still uncertain. Some reviewers commented that it could be either ETA 2895-2 or the Sellita equivalent, SW260-1. The two movements are very similar with only slight differences in size (ETA: 26.2 mm; Sellita: 26.0 mm) and jewel count (ETA; 27; Sellita: 31).

With a diameter of 39 mm, this watch is just the nice size for any wrist. It is also well suited for ladies. The choice of silver, a touch of blue and a tinge of red make it subtle and universal for all occasions.

A lot of watch brands recognized the commercial advantage of re-introducing nostalgic watch icons of yesteryears. Personally, I try not to buy vintage watches. Re-edition pieces provide the avenue of owning something similar that is made using the latest technology and materials. For TAG Heuer, the choice was wise. I have never owned a TAG Heuer before but I could see myself wearing this watch.

The second of two releases for 2015 by TAG Heuer, the Heuer Carrera Calibre 18 Telemeter (Reference CAR221A.FC6353) is based on the Panda-dial Carrera of the 1960s. 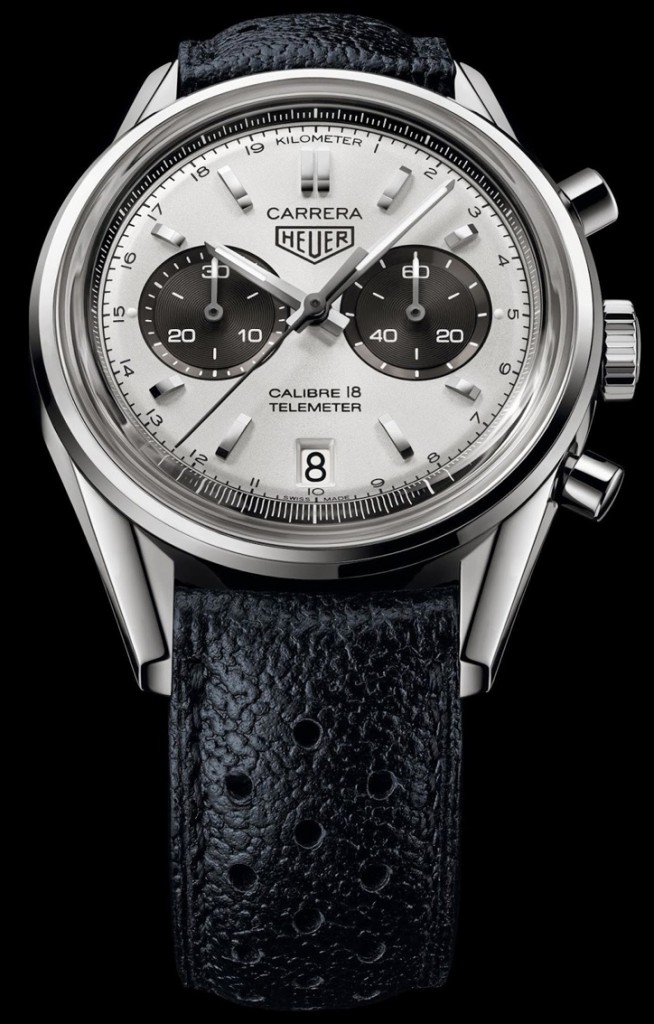 The Carrera Calibre 18 Telemeter uses a 39 mm stainless steel watch case with silver dial and two anthracite sub-dials on the left and right of the centerline. The minute chronograph counter is located at the 9 o’clock position while the running second counter at the 3 o’clock position.

A date window is situated at the bottom of the dial. The pushers and crown are located at traditional positions on the right of the casing.

The whole dial is protected by a domed sapphire crystal with double anti-reflective coating. The watch also comes with a display case-back and covered by a sapphire crystal piece. The strap is black perforated leather.

The chronograph function is not referenced to a tachymeter scale. Instead, it is referenced to a telemeter scale. This is a watch complication for military, to measure distance of artillery fire, based on the speed of sound. Nowadays, you can use it to measure the distance of a lightning strike based on the time it takes to hear the accompanying thunder.

The Caliber 18 is based the Sellita SW300 base with a chronograph module from Dubois Depraz DD 2223. TAG Heuer placed the movement inside a glass box, which they claim make the watch lighter. This method of placing a watch movement is innovative and interesting. My question would be the strength and capability of the glass box to withstand shocks vis-à-vis traditional metal casings.

For me, the most enduring feature of this piece is the domed crystal. Coupled with the small size (relatively) of just 39 mm, it looks really swell on one’s wrist. The lack of any other colors on the dial makes it ageless and has the same effect like the Omega Speedmaster Moonwatch. The choice of a telemeter instead of a tachymeter scale was also a good alternative by TAG Heuer as the likelihood of using that particular scale is much more, even if it is just for the fun of it (let’s face it, you are more likely to be in a thunderstorm wondering how far was that last lighting strike than on a test track trying to measure speed). Depending on the price, I may want to get one. For more info, please visit tagheuer.com